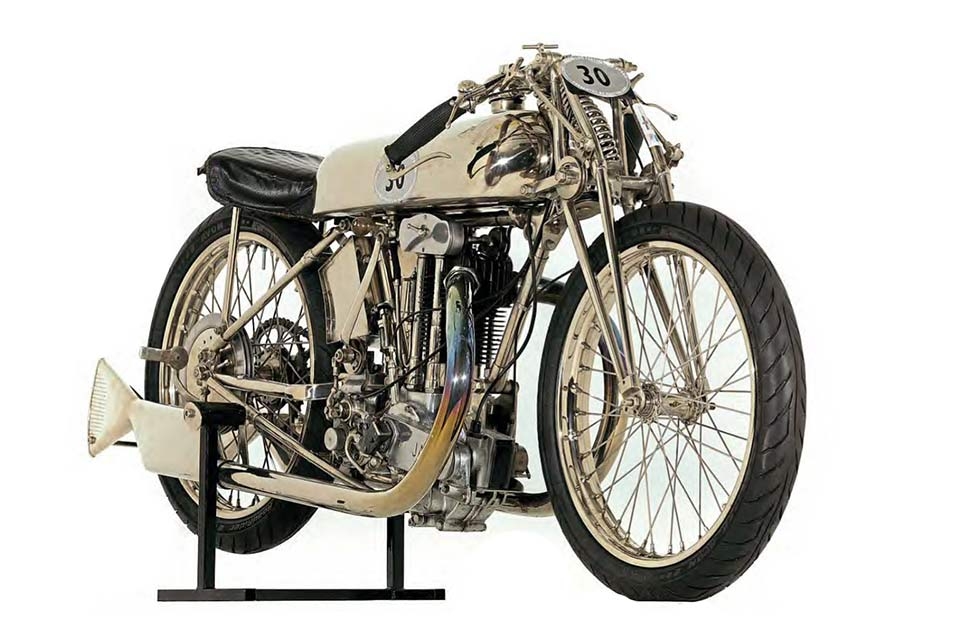 Grindlay Peerless Built simply to go as fast as possible, ‘The Hundred’ is truly function over form

It’s hard to believe that Shakleton Road, Coventry, was once home to one of the most formidable motorcycle marques of the prewar era. Here, in the 1920s, among row upon row of small terraced houses, Alfred Robert Grindlay and Edward Peerless set about producing a machine that would make racing history: the Grindlay Peerless. And this month’s featured machine is about the marque’s star creation: the 488cc, JAP-engined, Grindlay Peerless which later became known as ‘The Hundred’. The machine – which stands in the National Motorcycle Museum – is the original record-breaking example that made history back in 1928.

The Grindlay Peerless might take its name from the marque’s two founders, but in its heyday, this machine was, quite literally, peerless. And it looked the part too: thanks to its sleek, sharp slither of a tank and nickel and cadmium plate, so as to aid cleaning with fluids that were typically harmful to paintwork The Grindlay Peerless wasn’t just about style, ho , it also had substance – tons of it, as would be proved at Goodwood in 1928.

Grindlay Peerless originally produced sidecars but in 1923 the company started manufacturing large capacity V-twin motorcycles with a Barr and Stroud V-twin engine. The machines had a Sturmey-Archer gearbox and a chain final drive. Then, in 1924, the marque produced an overhead camshaft 488cc machine with a JAP engine, though in 1925 Grindlay Peerless resorted, once more, to a Barr and Stroud engine. That didn’t last long though – Grindlay Peerless were soon back on JAPs – a switch that would pay off in dividends.

But it was the 1928 machine – as seen in the National Motorcycle Museum – that would be the marque’s trophy machine. By this time, Grindlay Peerless had signed up rider/engine tuner Bill Lacey, who had already proved his worth riding 350cc Cotton JAP machines in the early Twenties. Lacey was admired not just for his riding skills, but also for the immaculate preparation of his machines.

In an interview for Classic Racer, Lacey said: “I didn’t have much interest in riding at all, not really. My main interest was in the workshop, making them go as fast as possible and absolutely reliable. That’s why I never raced in the TT; Brooklands was the only place for me.”

And it was Brooklands where Lacey and Grindlay Peerless made history, but more of that later… As the 1920s roared on, race records were being broken left, right and centre – including the 100mph record – which had seemed so elusive for so long thanks to Claud Temple. But Temple’s ton was achieved at the French speed bowl, Montlhéry, where speed-restricting silencers were not obligatory – unlike the UK, giving riders a greater advantage. Added to this, Montlhéry was a smooth circuit, which also aided speed, compared with the bumpy British equivalent, Brooklands.

So it seemed only right that a ‘100 miles in one hour’ challenge was put to riders on British soil and in July that year The Motor Cycle offered to award a cup to the first rider to cover more than 100 miles in 60 minutes on a British circuit. The ever-ambitious Lacey embraced the challenge and on August 1, 1928, conquered 103 miles and 532 yards in one hour. It was an incredible feat – not least owing to the speed-restricting silencers on his Grindlay Peerless and the shocking condition of the track itself. Furthermore, this was a machine with only a rear brake and a meagre three-speed gearbox.

But Lacey hadn’t just raised the bar for the 498cc class, he’d also beat Temple’s 101-miles and-1724-yards in one hour record at Montlhéry. Lacey, Grindlay Peerless – and more importantly, Britain – were now the kings of the ton.

Back at Grindlay Peerless HQ, among the terraced houses and back-to-back gardens, brothers Grindlay and Peerless were – needless to say – delighted. So delighted, in fact, was the company that it launched a handful of replicas of the 498cc machine called ‘The Hundred’. One of these rare replicas stands in the Brooklands Museum today.

Later that year, on October 6, Lacey upped his ante once again on the trusty 498cc machine, this time winning the Wakefield Cup at a speed of 107.10mph from a standing start and a flying lap at a sensational 109.97mph.

And it’s for this reason the 498cc machine even made it into John Griffith’s famous ‘Historic Racing Motorcycles’ even as far back as 1963, when Griffith’s book was first published.

This was just one chapter in Bill’s extraordinary career. In the 1930s he started working at the Norton factory and helped develop the company’s overhead camshaft engines. But as the global depression of the 1930s started to bite, many British marques either folded or stripped back their costs. As a result, Lacey stopped racing, formidable though he was, and concentrated on his work as a precision engineer and later set up a motorcycle garage. The latter was successful, until the outbreak of the Second World War, during which Lacey was involved in complex precision engineering projects such as the tooling for the production of 35mm cine film cameras.

Then, in 1957, Lacey had a call from Stan Hailwo who asked Lacey to prepare some machines for his young son, Michael. Lacey did so, with gusto, and in 1961 worked on the Norton Manx on which the young Stanley Michael Bailey Hailwood rode to his 1961 Senior TT victory.

But it’s the Grindlay Peerless on which Lacey made his name – a machine, much like Lacey himself, that was unrivalled, inimitable and – at least in 1928 – unsurpassable. In other words: peerless.