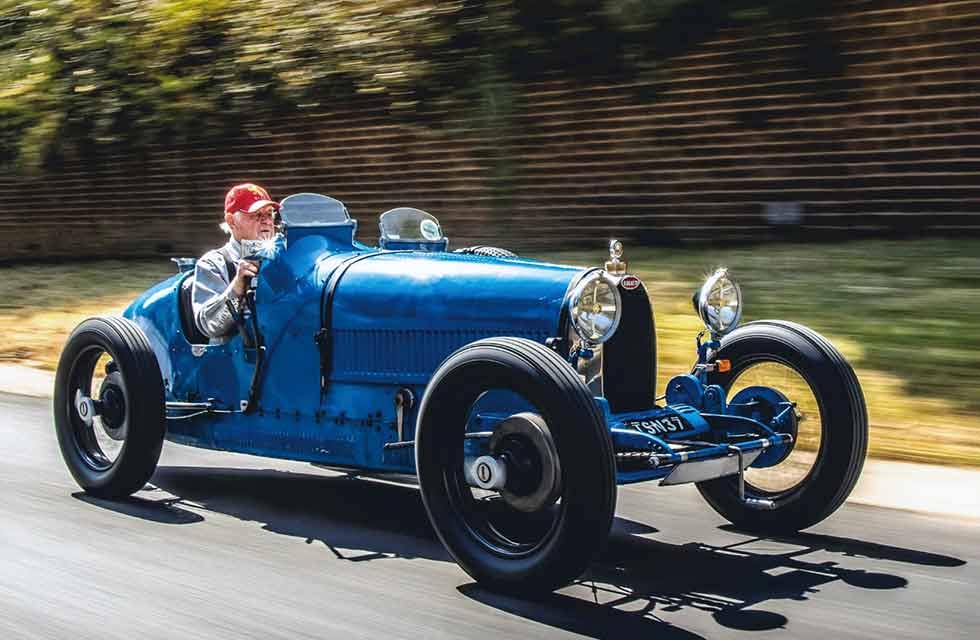 Bugatti is one of the most successful pre-war racecar constructors. We drive the only Type 37 in South Africa. Words y: Wilhelm Lutjeharms. Photos: Peet Mock.

These days, Bugatti is associated with hypercars such as the Veyron and Chiron. Although they’re extremely capable vehicles, they’re vastly different in concept to the racing cars which founded this exotic brand. The legacy, started by Ettore Bugatti, is well documented and so are his cars. Over the years, a few classic Bugattis have been imported into South Africa and some have undoubtedly been exported. Thankfully, several remain and one is a full-blown racecar.

The Bryanston-based owner, who prefers anonymity, bought this car in South Africa in 1973 and is only its third custodian (which means he’s owned it for 46 years). One of the previous owners even took his new wife on their honeymoon in it. The current custodian has partially rebuilt the engine himself, with the rest of the work carried out by experts, and has also overhauled the braking system, but that’s the extent of any in depth work. According to him, the last time this Bugatti was painted was in the 1960s.

As he shows me around his pride and joy, he peppers our conversation with interesting facts about the mechanicals, such as that the cylinder head and block are a single unit, and that access to the single-overhead camshaft is gained through the top tappet cover.

Surprisingly, this rare Bugatti isn’t stored under lock and key. Since the owner acquired the car, it has been licensed every year and driven regularly; thankfully, he understands every nuance, technical requirement and quirk.

The car has been driven in several local races and rallies, evidenced by the scrutineering stickers from the 1980s and ‘90s. The various owners have each added analogue dials to measure temperatures and pressures which all contribute to this vehicle’s illustrious 92-year history. The Jaeger rev counter is positioned to the left of the clock but you certainly won’t ­find a speedometer. There is also an innovative system where the driver can pump additional oil into the engine during longer endurance races.

This elegant boat-tailed car’s history is visually documented by paint marks and minor panel deformities. The leather straps which hold the spare wheel in place and the two-piece engine lid hark back to the days before the war. A badge next to the dials indicates land-speed record holder Malcolm Campbell sold this car from South Kensington, London.

The Type 37 might be visually arresting but it’s quite a chore to drive. For example, the fuel must be pumped manually before you start the car. Once the engine turns, however, the rumble from the single exhaust pipe is deep and powerful, unlike any other four-cylinder engine I’ve experienced.

The cabin is extremely tight and you rub shoulders with your passenger. I don’t mind; I appreciate the friendly instructions from the owner as I let out the clutch. Within the ­first 100 metres, I discover how light the car feels. Having piloted other mainstream prewar cars, this Bugatti feels like a pure racecar by comparison. There is a standard H-pattern gearbox: ­first gear is left and down, second straight up, but third is right down and four is up again. Thankfully, the layout of the pedals is the same as on modern cars.

The “crash” gearbox (no synchromesh here) takes some practice. Instead of cringing every time you want to engage a gear, it’s best not to hesitate. I push and pull the gearlever with purpose. This way, you limit the damage to the gears and swiftly engage your selected gear. Driving through traffi­c and neighbourhoods, I quickly learn it’s best to engage ­first gear before coming to a stop and use the clutch and brake to halt rather than leaving the transmission in neutral. If not, you will grate the gears when you try to engage ­first as the engine turns while the car’s standing still.

I start to feel more con­ dent and press the throttle pedal further. The small engine feels light and responsive; I de­finitely did not expect it from a 92-year-old car. Despite having two solid axles and leaf springs, I initially thought the car’s ride would be terrible but it negotiates speed bumps with aplomb and turns into corners convincingly, even riding as it does on those large bicycle tyres (Dunlop Racing 5.00-19).

The brakes feel strong and scrub off speed convincingly. You need to guide the Type 37 gently, though; the brake pedal is large and the throttle pedal much smaller and positioned further back so it’s easy to jam your right foot behind the brake pedal if you don’t pay attention.

From behind the small wind deflector – a metal unit with a glass screen ­fitted on a wood base – and across the louvered bonnet, it’s easy to imagine what it was like chasing a competitor, all while putting your life on the line to win a race.

“This car gives me so much joy and it is extremely exhilarating to drive,” the owner beams. Even though he is 82 years old, when he climbs behind the wheel he seems to shed years.

After our drive, I climb out and notice the left side of my left shoe has worn away. I realise the ‑ flywheel is open and when I moved my foot to the left while not using the clutch pedal, I rested it on the wheel itself. That’s certainly a ­first.

The 1928 Bentley 4½-litre I drove in September 2019 and this Bugatti had distinctive aims and vastly different design agendas. I now understand why Bentleys conquered long-distance endurance races such as Le Mans, and these smaller, nimbler Bugattis dominated Grand Prix and Targa Floria races. Never before has 44 kW felt so intense and rewarding.

The cabin features a bench-style seat. Note the fuel filler sited right behind.

One of the most exotic brand names in the world, with a “Made in France” plaque above.

Beautiful profile of a pre-war racer.

The boat tail adds a dose of elegance.

The crank to start the car.

A leather strap to secure the spare wheel and engine cover in place.

The basic (but challenging to service), four-cylinder engine with it’s unusual 1-2-4-3 firing order.