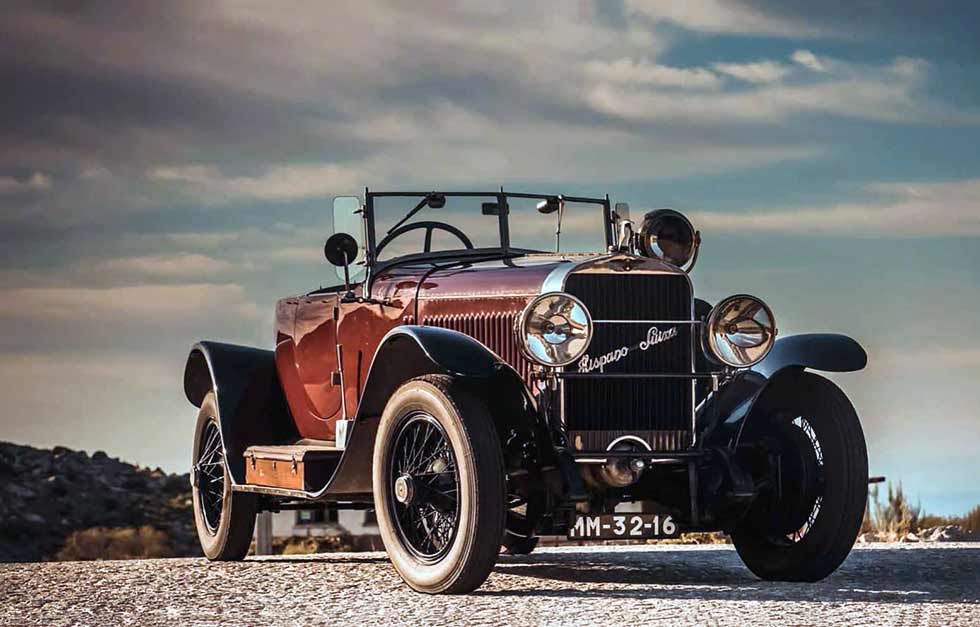 HISPANO-SUIZA H6B: UNDERRATED TITAN  This straight-six deserves to take its place alongside the established greats

The sky is vast, the light supernal, but there’s no time to take in the scenic vista. Besides, another will be along in just a moment. The road cleaves through the mountainside, vertiginous drop-offs and the lack of guardrail giving you pause to think or, better still, not think at all. You feel suspended between outcomes, but this is a 1924 Hispano-Suiza H6B – widely touted in period as being the finest car in the world – and torque is such that there is never a lull in forward momentum. Quite the opposite. It just pulls, and pulls, and then pulls some more. This stately looking leviathan burbles along quite happily, with only your forearms threating to wilt under the strain. Hairpin turn after hairpin turn is starting to take its toll, but then, finally, what passes for a straight.

It is at this juncture that you appreciate the car’s silky-smooth ‘six’ all the more. Quite aside from its architectural magnificence, it feels unburstable. There’s barely a rise in register. In top – third – gear the Hispano is perfectly happy sitting at 60-70mph. The heft of the screw-and-nut steering dissipates, mercifully, and it doesn’t wander or threaten to spill. By modern standards, the H6B won’t give a well-driven hatchback a bloody nose, but it won’t lag behind, either. It’s hard to believe this remarkable machine was made almost a century ago such is its willingness, refinement and, biggest surprise of all, ease of use, once you’ve overcome your initial hesitancy.

Given the locale, Portugal’s breathtaking Serra do Caramulo region, it’s hard not to be overcome by misty-eyed romanticism; to imagine you’re André Dubonnet, the millionaire playboy and decorated WW1 fighter pilot, taking the fight to Alfa, Mercedes and Itala opposition on the ’24 Targa Florio in an H6 ‘Type Sport’, leading the field around the twisty Madonie circuit. Either that, or envisaging the long-time owner of this car, João de Lacerda, terrorising the neighbourhood in his legendary press-on style. The ancestral seat led straight on to an active hillclimb course, and he wasn’t above taking it on epic pan-European thrashes as and when the mood took him. Which was often.

Who could blame him? Everything about this car invites hyperbole. It was always thus. This most French of Spanish marques was once a technical leader, with countless patents in its armoury. The firm’s products acted as blank canvases for some of the most respected – sometimes notorious – coachbuilders of the day.

‘It’s hard not to imagine you’re André Dubonnet, taking the fight to Alfa, Mercedes and Itala on the 1924 Targa Florio’

There were exotic cars, and then there were Hispano-Suizas. These were machines beloved by captains of industry and silver-screen icons; by heads of state and your common-or-garden beautiful people. Hellé Nice had an H6, while Pablo Picasso owned three, and that’s just for starters. Hispanos were immortalised in countless novels of the era, driven by characters such as Maxim de Winter in Daphne du Maurier’s Rebecca (although Laurence Olivier drove a six-cylinder MG in Alfred Hitchcock’s big-screen adaptation). The H6 was the perfect car for a hero, fictional or otherwise, not least because Hispano-Suiza had a chic and unattainable aura. This was due to the fact that in period you rarely saw them, especially in the UK. Consider this: this H6B would have set you back £2100 in 1924, or approximately £114,000 when adjusted for inflation – and that’s minus coachwork. That was roughly 15% more than a Rolls-Royce Silver Ghost rolling chassis. A comparable Bentley was almost half as much. The lofty price-tag was understandable given the laborious, hang-the- expense nature of the Hispano’s design and construction. The 6597cc straight-six, for example, borrowed heavily from aircraft technology. It boasted an aluminium block with steel cylinder liners, twin sparking plugs per cylinder, and a single overhead camshaft working the valves. There were also such modern flourishes as coil instead of magneto ignition. The seven-bearing crank alone must have taken an age to whittle, with each being machined from steel billet weighing 600lb (272kg). The end result weighed only 35lb (15.8kg).

The main talking point, however, was the braking set-up. The H6B featured four-wheel drum brakes, the drums being aluminium (with steel liners) to reduce unsprung weight, which was sophisticated stuff. But that wasn’t the big news. Hispano-Suiza’s great leap was the use of mechanical servo assistance. This was a technical first, with even arch-rival Rolls-Royce employing the licence-made ‘servobrake’ arrangement from 1924 until the mid ’60s. Genius was at work here, and you could argue that Hispano-Suiza designer Marc Birkigt was the greatest automotive engineer of the period. That, and the most ill-served by history.

Birkigt’s background is mired in conjecture and half-truths. Legend has it, perhaps apocryphally, that the Swiss moved to Spain to find work as a mining engineer, only to be asked to design a car. This seems a little fanciful, but he mapped out several vehicles prior to the formation of La Hispano-Suiza Fábrica de Automóviles in 1904. He designed every subsequent production ‘Spanish-Swiss’ model bar one, with work being divided between Barcelona and Paris from 1911, the French subsidiary producing the more luxurious variants while the lesser models were made closer to home.

WW1 established the marque on the global stage, thanks in no small part to Birkigt’s water-cooled, sohc V8 aero engine, which was first seen in 1915. While precise figures are hard to pin down, as many as 50,000 units were reputedly made. The H6’s straight-six was rooted in a subsequent V12 aero-engine design, the model causing a furore when unveiled at the 1919 Paris Salon de l’Automobile, the slightly more powerful H6B arriving three years later. It was superseded by the larger-displacement H6C in 1924, with variations on the theme continuing to be made as late as 1933.

Unfortunately for Hispano-Suiza, the 1930s would not be kind. The magnificent 12-cylinder, 9.4-litre (11.3-litre in time) J12 was introduced in 1931, to a world still reeling from the Wall Street Crash two years earlier. Scroll to the end of the decade, and production of motor cars took a back seat as Europe descended into hell. The manufacture of aeroplane engines took precedence, but there was no revival of four-wheeled transportation post-war. This was, in part, due to crippling taxes imposed in France on cars with displacements of over 2 litres, which also did for several other great makes.

In 1946, newly incorporated commercial-vehicle firm ENASA, which would later produce the ultra-exotic Pegaso GT, acquired the Spanish assets, while the largely autonomous French arm continued apace in the aviation industry, making everything from ejector seats to landing gear via, ironically, licence-built Rolls-Royce engines. It later produced turbines and, in 1968, became part of the Snecma aeronautical giant. Attempts at a marque renaissance have thus far failed to get out of the starting gate (see panel).

Which brings us to today. ‘Our’ H6B was acquired new by Portuguese gentleman driver Bento de Sousa Amorim. He collected the rolling chassis from the Paris factory on 30 May 1924 and returned to north Portugal, from where he began campaigning the car minus bodywork; he merely installed two seats. The precise what-happened-next part is clouded in mystery, but, in 1975, it was discovered by de Lacerda, founder of Museu do Caramulo. It was exhibited as found, but this arch-enthusiast opined that it deserved a body and dispatched the chassis to the UK, where renowned coachbuilder Tony Robinson expertly created one that closely aped a Kellner-style boat-tail outline of the period. Then in April 1982, de Lacerda drove the completed car back from Blighty to Portugal in just two days.

Photos don’t really lend a sense of scale, because the Hispano appears immense up close, fronted by the famous ‘Cigogne Volante’ (flying stork) mascot – a homage to French aviation hero Captain Georges Guynemer of the Storks Squadron, shot down in 1917 aboard a Hispano-engined SPAD – almost at chest level. It’s no wonder some owners equipped them with corks so as not to impale anyone. Clambering aboard, it appears even more elephantine, the bonnet stretching as far as the eye can strain. You sit high in the cockpit, facing a wealth of instrumentation, including an eight-day Jaeger clock and a speedometer that reads to 110kph.

In the centre of the vast wood-rim wheel sits the ignition’s advance/retard regulator. At full retard, you press the starter and the engine fires in an instant, a reminder that this car is used regularly. It’s hard to avoid Swiss-watch analogies here: it’s precision itself. There’s nothing in the way of vibration through the structure. The engine is barely audible. Slide the control back towards advance, press in the unyielding multidisc clutch and move the right-hand-sited, reverse-pattern gearlever into first. It engages with a pronounced ker-klunk and this behemoth moves off at little more than tickover.

The first few miles are uphill. And how. Using first and second gear, the Hispano climbs without protest. Only on straights do you double-declutch into top. Considering its age, you cannot help but be amazed at how easily it slots into gear. Anyone reasonably well-versed in old cars would be able to drive it competently, so long as you anticipate direction changes. That, and stopping distances. The brakes might have been state of the art in the ’20s, but that was then. The steering, which many motoring periodicals of the day said was eerily quick, feels leaden by modern standards, but it’s remarkably free from play at the straight-ahead. With cars of this vintage, you usually accept they’ll wander a little, but it resolutely stays on its given trajectory.

An hour in the company of this fabulous car is enough to make you appreciate more than just the visuals. Everything about it screams quality. It is less taxing to drive than, say, a vintage Bentley, and rewarding with it. If the Hispano wasn’t the finest car of its era, it’s hard to think of one that was in any way superior. Its outsized reputation was earned the hard way, and its spell isn’t in any danger of diminishing any time soon.

Marque revivals are nothing new, and a Hispano-Suiza rebirth has been on the cards for more than half a century.

In February 1965, Road & Track suggested that something might be in the offing, and hoped it could be a rival for the Maserati Quattroporte. Nothing more was heard from the marque until Barcelona-based design and engineering consultancy Mazel unleashed a bulbous mid-engined concept car in 2000, wearing Hispano-Suiza badging (above right).

It soon disappeared from view, as did the HS K8 saloon show car, complete with suicide rear doors and Audi V8 power, which emerged a year later. Several other stand-fillers have followed in their wake, with an Audi R8-based supercar (below right) threatening to enter production in 2012 at a cost of €700,000. Six years on, we’re still waiting…