Steve Plant didn’t set out to own one of these rare luxury Mustangs, but when he saw this survivor’s exceptional history, he couldn’t resist it... Words: Nigel Boothman. Photography: John Colley.

As American classics go, none is more famous than the Ford Mustang. That’s what makes the special editions and oddities so interesting – cars like this 1972 Grandé. Yes, Ford put the accent on that last ‘e’, even though it wouldn’t be right for either French or Spanish. These days it sounds like something you’d order from a posh coffee chain, but when the model was introduced for the 1969 model year, perhaps we were more easily impressed.

We tend to think of the first-generation Mustangs from mid-1964 to 1973 as endlessly successful, breaking all sales records and leaving the rest of the industry weeping into its beer. The truth is that Ford set itself such a high bar, so early, that after the Mustang’s peak year (607,000 cars in 1966) it was scrabbling around for ways to maintain those levels. This was never going to be possible – even a market the size of America couldn’t be expected to support another 600,000 Mustangs every single year – but sales dropped off so alarmingly, to 470,000 and then 317,000 in ’1967 and ’1968, that they tried all kinds of ideas to maintain the Pony Car craze.

Some regional special editions emerged at the request of dealers, the best-known of which was the California Special – a hotch-potch of extra visual features, including scoops and spoilers and Cougar-type sequential tail-lights. But the best-known ones are the performance variants. The expensive Shelby models started out as a tiny project by an independent outfit but were quickly brought in-house. When it was clear they would never sell big numbers, the Mach 1 and then the Boss Mustangs made their appearance, each given a different body number from the regular hard-top coupe, fastback and convertible. Alongside them, and also with its own body number (65E, as opposed to 65A for the normal coupe) was the Grandé.

It was an attempt to fit the Mustang into a whole new niche. The personal luxury sector had been emerging since the mid-Sixties, mainly thanks to the Thunderbird’s influence, and now almost every division in the industry offered something to tick that box. Typically ‘personal luxury’ meant two doors, four seats, a well-appointed interior with features usually associated with large upper-crust sedans, plus some exterior styling cues to turn a few heads. There was no real emphasis on performance – although you could specify just about any powerplant, of course.

The Mustang had been enlarged in 1967 and again in 1969 when the Grandé was introduced, so it could summon up a luxury car’s road presence. The ’1971 to ’1973 cars were of course larger still. You could tell a Grandé at a glance from its vinyl roof, usually fully covered except for some 1970 examples with a vinyl-covered area over the cabin, suggesting a targa panel, and painted C-pillars.

The covered roof really changed the Mustang’s attitude, allowing stylists to play with the proportions using side-stripes and trim spears and the placing of the join-line between paint and vinyl. Look at the ’1972 example in our pictures and you’ll see the vinyl doesn’t come down to the natural crease at the base of the C-pillars, but stops level with the kink in the side-three-quarter window. This gives the large coupe a more hunched, chop-top look.

Inside the Grandé was an extra 55lbs of sound deadening, while suspension changes supposedly produced a smoother, more refined ride, but it’s difficult to discover whether Ford really altered anything underneath. The cabin was the Grandé’s selling point, with standard high-backed bucket seats and a well-equipped dash faced with a wood grain appliqué for 1969, but reduced to a couple of strips of grain on the steering wheel by ’1972. You got an electric clock to make sure you reached your dinner date on time, and rear-seat passengers had their own ashtrays, which suggests the kind of market the Grandé was going for: your rear-seat passengers weren’t going to be kids, they were going to be your buddies’ wives or girlfriends on the way back from an evening at an expensive steakhouse.

Or perhaps your girlfriends’ husbands and boyfriends… we should not assume all Grandé customers were male. The first owner of this car was a lady, and she liked it so much she kept it until 2006. Her father owned a Ford dealership, Cline-Moore Autos, in Rutherfordton, a small town in North Carolina about 50 miles west of Charlotte. The level of detail in the car’s incredible history file tells us she traded in her old car for $850, which made up part of the $2150 she put down, choosing to finance the remaining $1375. The Grandé’s base price in two-barrel V8 form was $3002 in 1972, and our customer added auto transmission, power steering and maybe a couple of other little bits.

Her bill adds up to $3525, which suggests the poor gal got no discount at all, despite being the boss’s daughter. Business is business!

We know all this because of the car’s exceptionally smooth passage through the last 47 years. Steve Plant has owned it since 2014 and he explains how it happened: “I went over to see Steve Walker at Oldcott Motors in Kidsgrove, north of Stoke. (Tel. 01782 782081/ www. oldcottmotors.co.uk) I was quite taken with a Charger that he had in the showroom at the time and we got talking as I was having a look. Steve pointed to a Mustang parked next to it and said: ‘That’s actually the better car’.”

Mr Plant watched as Mr Walker pulled out a great big history folder and showed off the car’s original order form, factory sheet, delivery note and hundreds more items besides. The original handbook was there, so was the brochure, even a little plastic envelope from Ford that contained one of the bits of purchase paperwork and which urged car owners to re-use it as a litter bag. “The car was in use from 1972 to about 1996, when the lady stopped driving it and stored it at a neighbour’s house,” says Steve.

“Ten years later, she asked the neighbour to sell it for her, so he recommissioned it with a new fuel tank and some service work and sold it to a gentleman in Maryland. After this it must have attended plenty of shows because when he sold it in 2014, and Steve Walker imported it, it arrived with a load of trophies in the boot.’

It was later in 2014 when Steve Plant made his visit and he soon decided he couldn’t go home without it. It wasn’t his first American car – he’d owned a Ford Bronco, a ’1976 Mustang and a highly original AMC Ambassador in right-hand-drive, one of the cars marketed here and sold new into the UK market. But nothing could touch the pampered state of this Mustang. It now shows 65,000 miles, only a few thousand of which have been added since it came out of storage in 2006. That means that it was driven an average of around 2500 miles a year for 24 years by one lady owner, then stored, then sympathetically revived and kept under cover, maintained and used occasionally. Pretty much ideal – and yet so unusual.

“I do get a bit frustrated at shows when people barely give it a second glance and walk on to look at some other car fresh from a restoration that’s cost tens of thousands,” says Steve. “I feel like saying, ‘Hey, this is the real thing – if you want to know what they were like when they were new, here you go!’ “ While the paint (Medium Green metallic with an Avocado vinyl roof), the trim (black Ruffino Corinthian vinyl) and even the unused 1972 spare wheel and tyre are all as the factory left them, so is the driving experience, which is less in tune with modern traffic.

“The brakes are drums all round,” says Steve, “and there’s no servo. So it’s got a lot of go but not much stop! Otherwise it’s a typical American car of the era – more of a straight line machine, with a bit of a wallow in corners. But you won’t see another one. The Marti Report says it was one of only 116 with this paint and trim.” Steve likens the car’s image to a mixture of American muscle with a touch of British style, and the wood-grain dashboard and that funny European accent on Grandé does suggest a transatlantic glance for inspiration.

The Mustang’s early sales boom continued to fade – down to 125,000 by 1972 – but that was hardly the Grandé’s fault. It took an all-new subcompact Mustang, launched in 1974, to send the sales graph upwards again. So next time you’re at a show and you see a car that seems like ‘just another Mustang’, have a closer look. It might be a piece of living history, like this one. 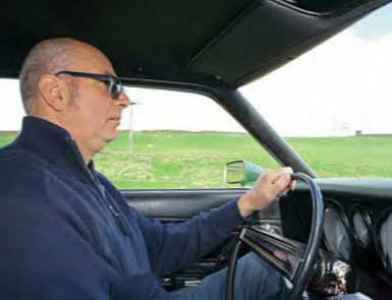 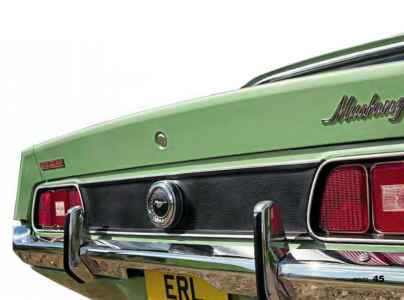 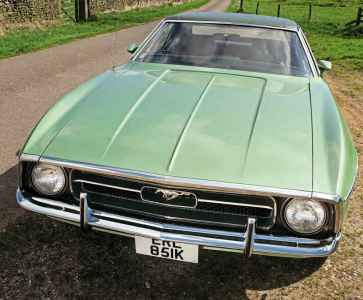 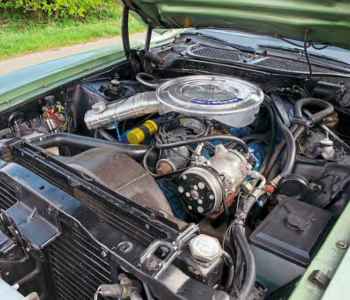 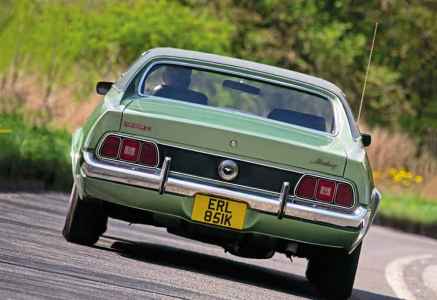 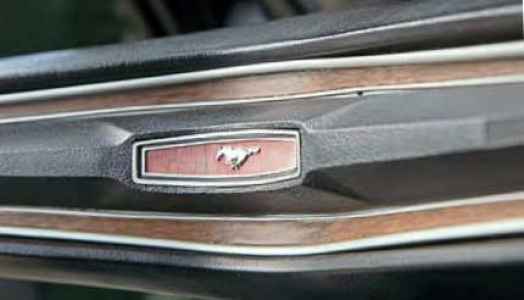 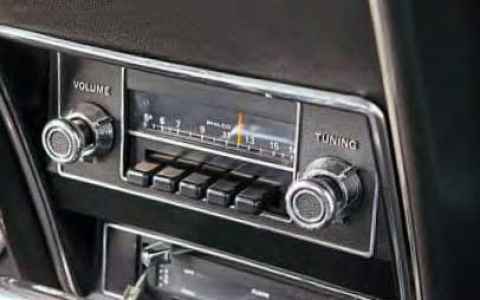 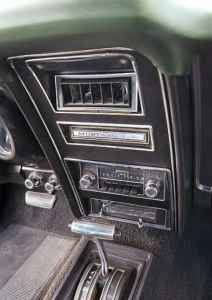 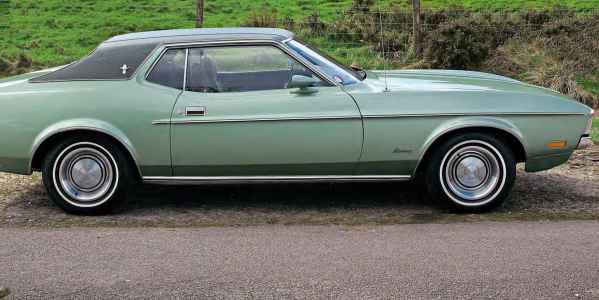 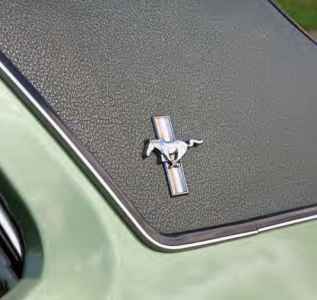 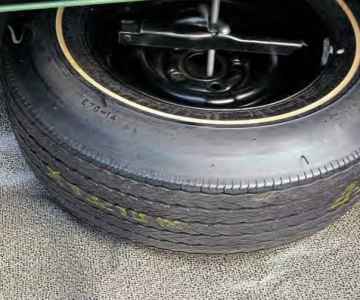 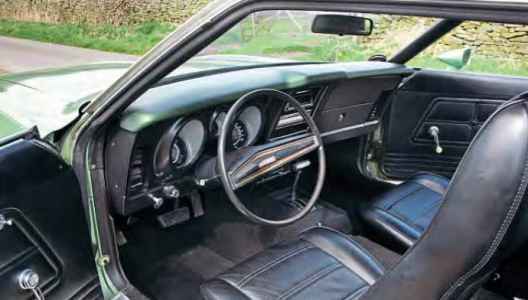 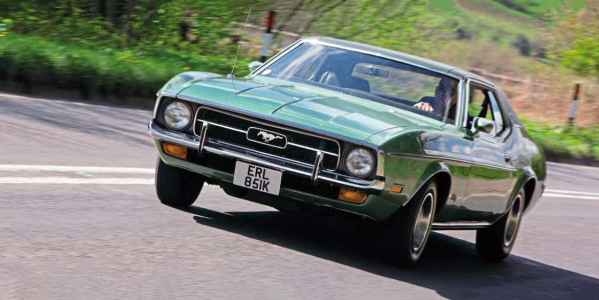