Paul Singer reckons a trip to Santa Pod was responsible for him owning American cars. “I went with my dad and brother sometime in the Seventies when the Pod first started holding Funny Car races,” remembers Paul. “After that I had to own something American. My first was a 1970 Chevy Nova, followed by a 1984 Camaro Z28, then I got a 1990 Corvette – which I wrote off – so bought a 1991 C4 Corvette. I loved that, but I needed a car better suited to towing, something with more boot space and room inside it. Originally I was towing a trailer to shows, but we’ve since bought a caravan.

“I still regretted selling that Nova,” continues Paul, “so I was looking around for something equally interesting but that would fit on the driveway. I was thinking another Nova or a Cougar – when I saw this Duster advertised online and bought it in October 2016. It was a car I’d remembered seeing for sale a few years before. It ran nicely, but I took it to Richard Alder at Alders Automotive (01323 848448/www.aldersautomotive. co.uk) just so he could check it over.” Richard spotted the core plugs were leaking, meaning the engine had to come out. It’s just as well, because then he realised that the block had cracked. “It wasn’t obvious until he removed the heads because the block hadn’t split all the way through, but it still meant a complete rebuild.”

Stateside Auto Parts (01827 717600/www.statesideautoparts. co.uk) found Paul a used 318cu in V8 block. “They were brilliant, really helpful,” he said. Then Dave at She Devil Racing (see ‘She Devil Racing TMFC’ on Facebook) acid dipped the block and machined it. “Since Richard was rebuilding the V8 anyway I thought I might as well have it improved,” laughs Paul. “So it got a stroker kit to take it out to 390cu in, an Edelbrock inlet and heads, SCAT crank, forged pistons, Competition cam and roller rockers, a 650cfm Holley and Headman headers. We believe it’s now putting out about 450bhp…

“It was never going to be an original matching-numbers car, although it was a genuine Twister. It started life with a slant six engine and was painted red – I’ve never liked red cars… We also had to rebuild the 727 Torqueflite since that had a four-inch crack in it too. It was off the road for nine months and I must thank my other half Lorraine Brazier for putting up with me during all that.”

The Duster came to Paul already fitted with front disc brakes and adjustable air shocks on the rear. It had been reupholstered in leather in the UK around 2008. “I got a few old bills and receipts with it, but no history. I believe it had a ground-up rebuild and bare metal respray in the UK but I can’t even say for sure exactly what colour it is. I think it’s Sassy Grass Green, but Adam Ford from the Mopar club reckons it’s Sublime. I know the Duster was first registered in the UK in June 2005 and there’s a nice note written inside the boot by the nearside tail-light signed by ‘Tony,’ I suspect that might be Tony Shaw since there is paperwork with that name on it.

“I’ve tried to find him on Facebook. It would be interesting to hear from anyone who knows any history of my car.”

Plymouth’s designers had a $15 million budget to freshen the Valiant for the 1970 model year. The Valiant had been launched in 1959 as a compact, then was restyled in 1963 and again in 1967. It was now available purely as a two- or four-door sedan – any sporting pretentions had been usurped by the Barracuda. The designers responded by, quite unexpectedly, turning Valiant into a fastback coupe that could take a 340cu in V8 and become a serious rival to Chevrolet’s sporty 327cu in Nova.

The existing 108-inch wheelbase, floorpan, cowl, front styling, inner quarter panels, door lowers and even both bumpers had to be carried over from the Valiant. It was a tall order since that meant the Valiant’s five styling crease lines down the sides must also be retained. Designer Neil Walling swelled the rear quarters above the wheel, angled the lower line up sharply, then dropped it. It added a wedge shape to the car that cleverly softened its sides. He couldn’t swell those sides much since he needed to retain the rear axle’s 55.6-inch track. “I always wished it had a wider track,” Welling later commented. “When I bought a Duster I fitted two-inch spacers to make it look right.”

The sloping roofline met the boot lid at a high angle, with a wedge-shaped rear pillar that made it look shorter than it was. The Duster’s overall height was almost 40mm lower than the Valiant sedan and caused some issues for studio engineers who had to adapt the existing Valiant door to accept the more curved Duster front door glass. Devising roll-down windows for the front proved so complex that the rear windows were simply hinged.

Adding horizontal tail-lights (to stand out from the vertical Valiant’s) looked great, but resulted in a high lip. In 1971 boot lids were given a styling crease down the centre in an effort to stop them bending when slammed hard.

Out front, an attractive recessed blacked-out grille was fitted with flush sidelights evocative of the Pontiac Grand Prix. The entire car was designed in six weeks and an advertising agency suggested the name Duster. The Duster cartoon swirl graphic was intended to be the Tasmanian Devil, but Warner Brothers – having recently massively undercharged Plymouth for use of their Road Runner trademark – wanted almost 10 times as much to licence their devil. So Plymouth instead devised their own character.

A non-functional dual scoop bonnet and rear spoiler package was available, as were high-back bucket seats and dual exhausts. The plan was to introduce a totally new Duster for 1972, but Chrysler just didn’t have the necessary funds. Fortunately, Duster was a gigantic success. A great-looking car representing real value for money, 192,375 flew out of the showrooms for 1970, while 1971 saw sales of 173,592. Add to that the 12,886 people who took a 340 home and virtually one in three Plymouths sold was a Duster. In fact the Duster would continue to sell, with annual facelifts, until 1976. The 340 engine was replaced by a 360cu in V8 in 1974 and the Twister was dropped for 1975 although the Duster wasn’t replaced by the Volare until 1976. Individual sales figures for the Twister weren’t kept, but overall Duster sales of 1,332,846 over six years were certainly decent.

From what I can deduce, our featured Plymouth Duster Twister was born June 8, 1971 at the main Dodge plant at Hamtramck, Michigan. It originally had the 145bhp 225cu in slant six, tinted glass and emission control. Other than the Twister package it was also optioned with a two-watt AM radio. “I haven’t drag raced it yet,” admits Paul, “but I’m looking forward to taking it to Santa Pod. It was getting a bit warm in traffic so I had Collin Reay from Creative Aluminium Fabrications (07779 776998 or see Facebook) custombuild a radiator. He’d done a lovely one for my friend Peter Christmas’ Dodge Demon and since Collin had all the dimensions to hand it was straightforward to make another.”

Other changes made before Paul bought his Twister include straight-through twin exhausts, and a large fuel tank in the boot: “It looks like about 12 gallons. I’ve covered it in decals related to the parts that are now in the rebuilt engine.” Paul also switched to slightly smaller front tyres: “The ones it had rubbed on full lock and I found a receipt fromNorth Hants Tyres (01252 318666/www.northhantstyres.com) for the wheels and tyres that were on it so popped over there. They were really helpful and remembered the car; they fitted new tyres on the American Racing Baja wheels the Duster came fitted with.

“I like all sorts of cars,” says Paul. “I had a Jeep Cherokee for a while and an ST Focus. For a long time I wanted a 1957 Chevy, but then I always liked the sound of a car with a lumpy cam and this Duster gave me the chance to own one. I feel more confident about driving it now too, knowing everything inside the engine is brand new. I use it as much as I can. Other than the need to fit a permanent tow bar in future I won’t change a thing – I’m really happy with it as it is.”

“I ALWAYS LIKED THE SOUND OF A CAR WITH A LUMPY CAM AND THIS DUSTER GAVE ME THE CHANCE TO OWN ONE..” 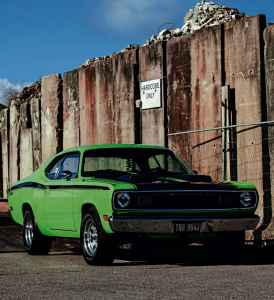 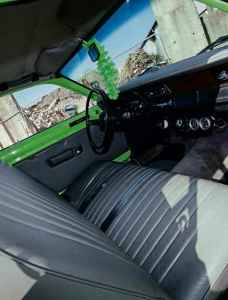 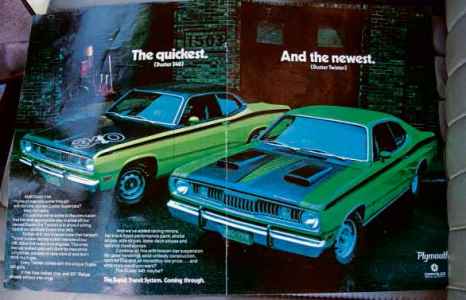 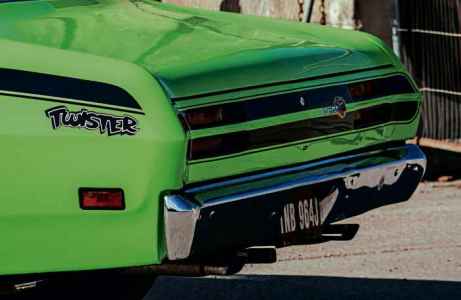 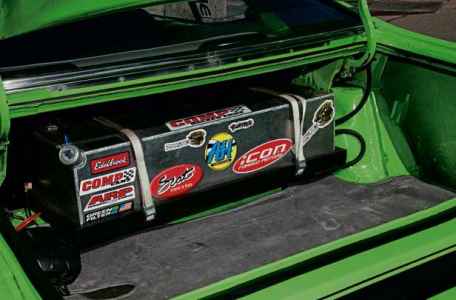 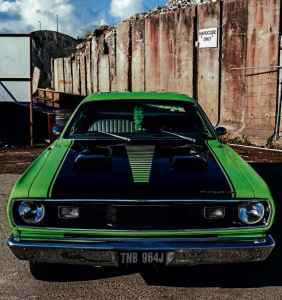 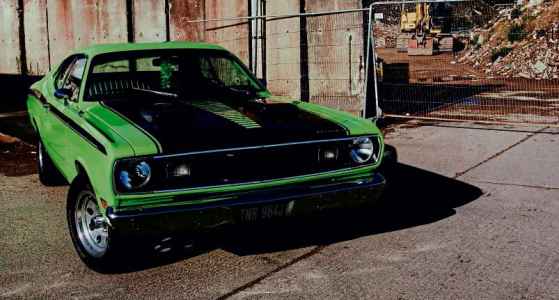 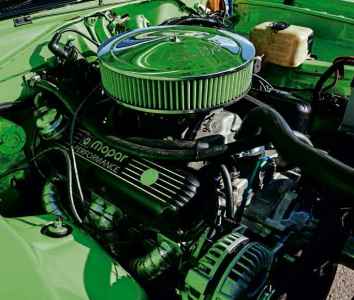 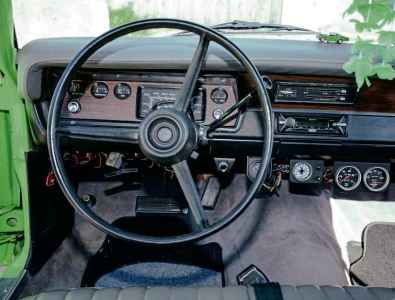 Plenty of auxiliary gauges under the dash. Interior and carpet done in no-nonsense grey. Amen to that! Stateside Auto Parts sourced the 318. Twister graphics. Fuel tank is believed to be 12 gallons. Duster was replaced by the Volare in 1976.