Backdating a 911 is nothing new but the lengths owners are now going to in order to create the perfect example and something truly bespoke are quite remarkable, as this timeless Targa demonstrates. Story: Stuart Gallagher. Photography: Andrew Tipping.

964 Targa 4 Backdate A backdated 964? Hasn’t that been done before? It has, but this example is one man’s interpretation of creating a modern classic.

I didn’t set out to build a copy of a Singer. I’ve never even seen one in the metal… well, carbon fibre,” and on meeting Gary Walters you have no reason to think otherwise. By his tone, the way he presents the car and the enthusiasm and passion he has for his 911, you just know that he wanted to build something unique and to his tastes, and not copy other’s ideas, which is exactly what he has done.

There is always a risk that anyone who backdates a 964 today is going to stand accused of copying the craftsmanship of Rob Dickinson and his talented LA-based crew. Indeed, we’ve seen enough home-brewed Singer lookalikes to know just how much of a cult brand the LA firm has become. So much so that people will try anything to bask in the glory of the West Coast’s finest 964s. But Gary’s project was different.

“I built this car to use, it’s not a trailer queen”

Gary is a Porsche man; 944s, Boxsters and 996s have come and gone but like so many of us it’s the older metal that holds the strongest attraction. But you don’t need telling that older Porsches are worth more than a footballer’s weekly wage, which is making them increasingly compromised machines if you want go out and enjoy them. It’s not a recent problem and it’s why the backdating game is nothing new, it’s just moved with the times. What started with unloved SCs being turned into 2.7 Carrera RS wannabes are now 964s being transformed into 911s that take their inspiration from the hot-rod era of the late 1970s when Porsche itself was throwing all kinds of mechanical upgrades and bodywork modifications in the direction of the 911 in a bid to keep it competitive on track and alive in the showrooms. And that’s where Gary’s Porsche, a 964 Targa 4, comes in.

“Good coupés are becoming hard to find and expensive, too, so I didn’t want to spend too much on a car that I knew I was going to change so much,” Gary said. “I don’t like the early Cabriolets but always had a soft-spot for the Targa, especially the original pre-’1973 cars with the stainless roll-hoop. And when I started this project you could still get a 964 Targa for sensible money.”

Before the project started Gary had a strong idea of what he wanted to achieve: “It had to be to the very highest standard and quality, I wasn’t prepared to compromise as I didn’t want to have a finished car that I wasn’t happy with.”

The idea for the build was to merge classic Porsche design queues from some of the company’s most iconic cars with the very latest technology. The work started with sourcing the main body components. The rear arches are exact copies of original RSR items manufactured in steel, while the fronts are from the ST. “There are plenty of fibreglass kits out there but I wanted steel, it was the only way I could get the quality I wanted,” Gary said. “It wasn’t only the wings but the bumpers and sills had to be correct, too. When I started the project I told the bodyshop that this wasn’t going to be a quick in and out job, that I wanted them to take their time to achieve the best result.” 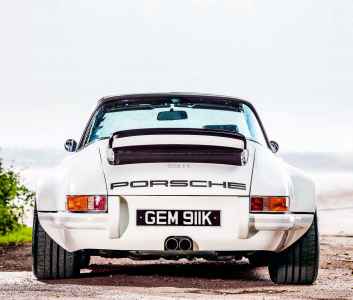 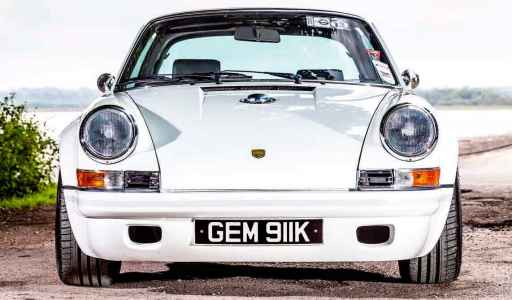 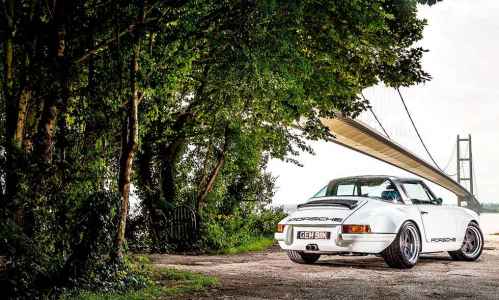 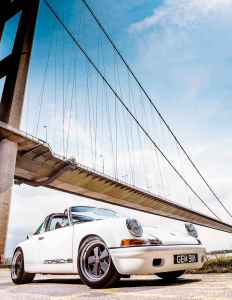 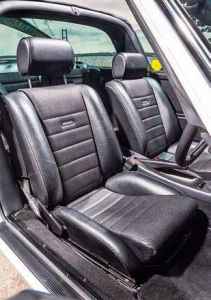 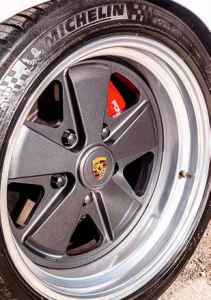 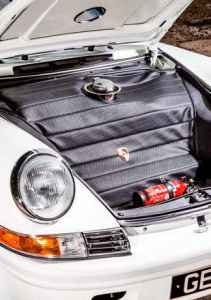 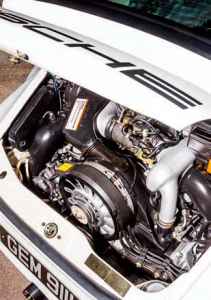 The early part of the build process saw sections of old bodywork cut away as cleanly as possible in order for the wings to fit with millimetric precision. And then Gary’s methodical approach to the build took hold: “It became quickly apparent that the ride height of the 964 and the dimensions of the old panels we were fitting were going to give us a few problems when it came to being a cohesive design. The wings weren’t the issue, but if we had just fitted the bumpers and side sills as they were the car would look a mess.

“We needed the bumpers and sills to be deeper but no one made them that size so we produced them ourselves. For both the front and rear we bought a replica bumper, cut it up and made it to the size we needed, took a mould off that and then produced the finished article.

“For the side sills we had to have them made for the car so that they covered the exposed oil cooler pipes and folded under the body’s sill to lower the body line of the car. These then had to be blended into the new front and rear arches.”

Stepping back to observe the deeper bumper and stretched sills, if this work hadn’t been pointed out to us, we wouldn’t believe they were any different. Run your hand under the sill and all you can feel is a continuous line of body trim. Look at the how the wider arches blend seamlessly into the sills and you’d be convinced this was a factory build. The rear bumper not only had to pull off the same trick as the front but it needed to house the exhaust, too. “Hayward and Scott made the system and sent it to us so we could fit it to the car and offer it up in situ with the new bumper. I then marked the tailpipes as to where I wanted them cut and sent the whole thing back to Hayward and Scott for them to cut to the final length, ceramic coat it and fit the chrome tips. Normally you’d have the exhaust made and finished to length and then you’d fit it to the car, but I wanted the tailpipe length just right which meant they couldn’t finish the exhaust until we had the body ready to be fitted.”

When backdating a 911, when it comes to the bonnet and the car’s nose there are two options open to you: either fudge the issue that later 911s have a short-bonnet and somehow make the front of a new car look older with some poorly-fitted side repeaters and cooing vents. Or, you can go the whole hog and replace the front slam panel and replace it with one from an older car and fit the correct period bonnet, lights, indicators and grilles. To be honest, the latter way is really the only way to do it. Unless, of course, you want to go to the trouble of extending a short bonnet by welding a handcrafted extension to the end of it and modifying the front of the car by hand to enable a factory tight shut line and period lighting and jewellery, which was Gary’s approach: “It wasn’t the straightforward approach but because we had to hand-finish the bumpers to get the right fit and finish we knew the preferred method of changing the nose of the car and the bonnet would no longer work. By doing this it allowed us to keep control of how the car looks as no off-the- shelf parts would have worked as well.”

It is this level of detail that permeates around the 964. The bright work has a stunning depth of quality about – those wing mirrors are handmade from aluminium and the quarter lights are colour matched to the windscreen; the opening for the centrally mounted fuel filler in the bonnet was painstakingly cut by hand and trimmed accordingly. The rear spoiler, still the retractable 964 item, is finished with a rubber lip that nods in the direction of a whaletail while having an element of ducktail design about it. Neat trick that.

And there’s so much more. The roll over hoop and the rear glass are from a pre-’73, the latter having been treated to an all-new chrome work. And while you’d like to think that the roll hoop and window should fit with ease due to this generation of 911 being from the glacial development stage of the model’s life, Gary will confirm it was a bit of a nail-biter when it came to the final fitting stage. Not least because tracking down a new rear window can’t be solved with a call to Autoglass.

Inside the detail continues. So much detail. The seats are new but period trimmed and offer the precision of the latest slide and tilt functions rather than the lottery of the original. The doorcards, rear seats and rear shelf have been retrimmed to Gary’s specification and the dash has been trimmed with matching basket weave vinyl and a period headunit fitted. The trim up the A-pillars, across the header rail and under the roll hoop blend brilliantly with the new Targa panel. Even the front boot is finished to a standard much higher than most new cars. The fit and finish throughout is second to none. Mechanically the 3.6-litre ‘six remains stock but that Hayward and Scott system gives it a raucous voice, enhancing the model’s natural vocal talent. The chassis is lowered on H&R springs and adjustable dampers, but not too much to be either impractical or suggest it’s an all go and no show machine. “I built this car to use, it’s not a trailer queen,” Gary told us, which is reassuring to hear.

The wheels are bespoke. The centres are original Fuchs items painted Porsche Seal grey and the barrels are hand-finished in aluminium and measure nine and eleven inches front and rear respectively. The dish on the wheels is on the right side of rude.

The decal set is to Gary’s own design, made to fit the car’s new bespoke dimensions: “With the RSR rear wings and the work we did to the bumpers we couldn’t use the same size graphics that Porsche supplies. I wanted them placed on the car so everything was in proportion and took in the car’s new dimensions. An anorak might say they are too high or too low compared to where Porsche would have fitted them but to me it was more important that they looked right.” Which they do, down to the very last millimetre.

Like everything on this 911 there isn’t a piece of trim that looks out of place or a section of bodywork that looks out of proportion. Nothing at all jars and makes you think, ‘ooh, that’s not right’. Perhaps the biggest compliment, however, was from Singer itself. “I had a call on my mobile from a US number and thought it was a colleague. I didn’t expect it to be Rob Dickenson on the other end!” The man behind Singer had seen pictures of Rob’s car online and, like all Porsche enthusiasts wanted to talk about it. “I thought he was going to say I couldn’t do it and that I was ripping him off, but he’s just a great bloke who just wanted to know about the car. I reassured him that I wasn’t doing it as a business and that there wasn’t a Singer badge anywhere near it and he was cool. In fact, he said if Singer was to do a Targa this is exactly how they would go about it. I was pretty chuffed with that!” And who wouldn’t be.