The List. Your dream drive made real Simon Lister has owned eight Lotuses, but never an Esprit. How will he fare when we let him loose in a mighty V8GT? Words Sam Dawson. Photography Jonathan Fleetwood.

‘You can feel the Shape around you’

Esprit heaven? A reader finds out

Arriving at Bedfordshire-based Morgan and Lotus specialist Allon White Sports Cars, I feel slightly embarrassed ahead of today’s dream drive. Usually I like to form a welcoming committee when our lucky reader arrives ahead of the big reveal of the car they’ll be driving for the day. But today, even though I’m half an hour earlier than planned, Drive-My reader Simon Lister is already here, leafing through a Lotus brochure, determining the perfect specification for a new Elise.

‘There are eight Lotuses in my back catalogue,’ he explains. ‘Mainly Elites and Excels, plus the Holy Grail Elite – a Riviera – which I still own, along with a Carlton. However, the Esprit was always missing from my Lotus experience.

‘I usually like early examples of cars – they tend to get messed with as they get older – but I feel the opposite way when it comes to Lotus Esprits. It’s clear they were improved massively over time, and were always meant to have a V8 from the start too. I want to drive the V8GT because it’s my perfect idea of what an Esprit should be. I don’t want to be let down by it!’

Simon laughs as he says this, because though he knows he won’t be. However, as we emerge into the car park behind Allon White to be greeted by a gleaming indigo-blue Esprit V8GT, two notes of caution sound. The first is the car Simon arrived in – it’s an early 4.3-litre Aston Martin AMV8 Vantage that he co-owns with a friend, the sort of thing many people might think would put an Esprit V8 in the shade. And the second comes from Simon himself, as he circles the car, taking in its details.

‘It feels so planted on the road, and I’m pleasantly surprised by how dated it seems’

‘I can’t work out the maths with the Esprit V8,’ he muses. ‘It has 3.5 litres and two turbochargers, but only musters 350bhp. I can only assume they turned the wick right down!’ Lotus did just that, in the name of driveability. This engine, with its two small Garrett T25 turbochargers, is all about tractability, but the thunderous GT1 racing derivatives contesting the BPR Global GT Championship in the Nineties, sporting a socking great single Garrett T04 and tuned without considerations like stop-start traffic in mind, managed to get a reliable 550bhp from the same engine. True, in that state of tune it had a habit of destroying driveshafts and gearboxes. But before it expired in a flurry of transmission shrapnel the Esprit GT1 proved itself capable of beating Ferrari F40s and even snapping at McLaren F1 heels. But did any of this explosive performance translate to the road car?

‘It’s quite comfy once you’re in here,’ Simon remarks as he settles into the driver’s seat. He tries to adjust it a little more, sliding it back, but there’s nowhere for it to go because of the immovable object behind his back. ‘You know, now I think back, having owned one short of 50 cars over the years – and even with a taste for unusual sports cars – none of them have been mid-engined,’ he notes. ‘They’ve not been avoided on purpose, I just tend to choose cars I’m interested in, improve their condition then sell them on. I pick cars on the experience they offer, rather than the manufacturer who builds them. Now I think of it, this will actually bemy first experience of a mid-engined car.

‘The basic shape, even 40 years after it was first created by Giugiaro, is still striking. I’ve never been in a car like this before – you can actually feel the shape around you. The roof and the top of the windscreen are so close to your head and the ’screen’s at such an extreme angle. It’s the ultimate wedge!’

Simon fires the engine, and pulls out of the yard onto the smooth, fast-flowing country lanes snaking around the little-used Cranfield Airport. It’s an unusual sound – at rest, the exhausts give off a deep, harsh-edged throb rather than a V8 burble, while acceleration produces a violent crackle and snarl, rather than the high-pitched Ferrari-esque zinging yowl you might expect of a relatively small-capacity V8 with a flat-plane crankshaft. This isn’t an engine contrived to sound operatic, but a powerfully mechanical noise straight from the racetrack.

Simon grins as he picks up speed, leaning the Esprit everharder into the bends as he enjoys his total-immersion course in mid-engined handling dynamics. ‘It feels so planted on the road,’ he enthuses, ‘and I’m pleasantly surprised by how dated it seems, in a way. You feel so insulated from the action in modern cars, even my Aston, but this steering feedback is so immediate and communicative. It gives you the confidence to corner hard, and being a Lotus, it’s good at corners!’ Simon aims the Esprit at an uphill succession of narrow, tree-shaded S-bends and firmly, progressively kicks the accelerator.

‘It’s so much more raw than my Aston. The only thing I can criticise is the way the performance is delivered. I find myself changing up a gear just as the turbochargers come on song, but perhaps that’s more a limitation of public roads than the car. I do track days at places like Bedford Autodrome so it’d be interesting to see what the car was capable of somewhere like that.’ So, the car that seemed strangely underpowered on paper to the man who arrived propelled by 380 of Gaydon’s finest thoroughbred horses turns out to be too fast for the road? ‘It turns out my maths was wrong,’ laughs Simon. ‘I didn’t factor in the weight – it’s a very light car, so it doesn’t feel underpowered at all.’ At just 1325kg, the Esprit V8 makes Simon’s 1640kg Vantage seem a little on the portly side.

‘And it’s so pure.’ Simon continues. ‘I’ve never driven this car before and yet already I’m cornering closer and closer to the apexes on the road without even thinking much about it. I imagine with a bit of practice on track, you could drive it very fast indeed.’ Thoughts of racetracks get Simon wondering what it is about Lotus that he finds so emotionally appealing, beyond the engineering. ‘It’s funny, I didn’t really follow Formula One when I was a kid, even though that was the height of Lotus’ JPS-liveried era when they achieved so much success,’ he muses. ‘Back then, I was more interested in learning to drive and getting my first car – at 17 I bought a Ford Anglia. It served a purpose, helped me learn how to be a better driver. I think everyone should go through that rite of passage – people shouldn’t be allowed to own expensive first cars.’

As we head away from the airport towards the village of Salford, the country roads offer a moment of driving perfection. Sun beating down from a cloudless sky bakes the tarmac into a great grey roll of upturned sticky tape. Freshly cut corn in the fields widens sighting lines into broad vistas. A mile of fast road is visible to the point where the dashed centre line can be crossed to create racing lines with shallower corner radii. Simon goes for it.

‘This car helps you be a better driver too,’ he notes. ‘The way the power falls away so suddenly when you lift off the accelerator, for example – it might sound like a criticism, but I like a car that loses its revs quickly. It’s more controllable, easier to slow down into corners. Modern cars try to smooth everything off gradually with torque and various electronic aids, but that’s not always what you want when you’re heading into a sharp bend and don’t want to carry that much speed, but at the same time want to avoid hard braking that would slow your momentum down. The fact you can drive an Esprit like this means you can feel the racing thinking that went into it. The steering’s heavy but you want it like that, because it’s resulted in more communication. The aggression of the throttle – both in response and lift-off – means you have to quickly learn to modulate it properly. And the gearchange is good – far better than I’d been led to believe. Only fifth gear is baulky, whereas first to fourth – where all the action is – are nice and slick. I’m not sure I like the lever though. It’s a bit too tall and doesn’t look like it belongs in the car.’

As the road settles down into a long cruising straight, Simon starts to feel more at home in the Esprit – this Lotus Carlton owner has started to spot familiar parts. ‘I can see Vauxhall bits everywhere!’ he laughs. ‘The ignition key, doorhandles, centre-console switches – they’re all a legacy from the time when General Motors owned Lotus.’ 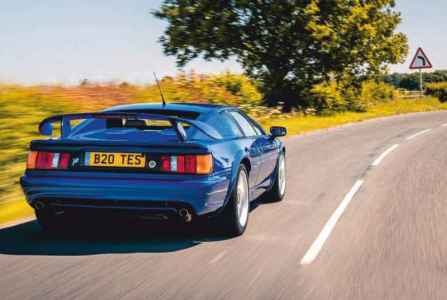 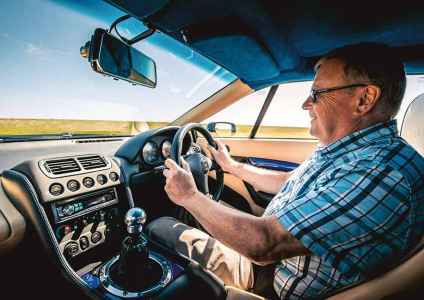 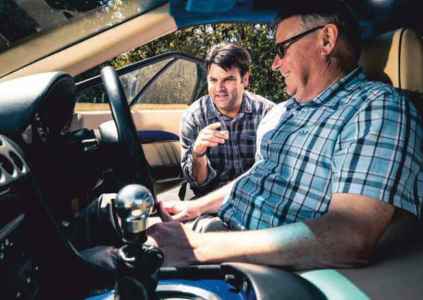 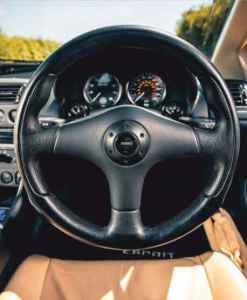 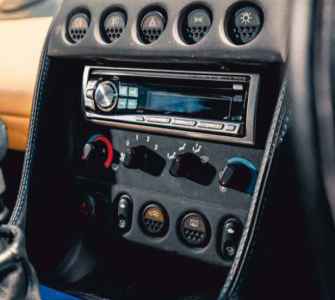 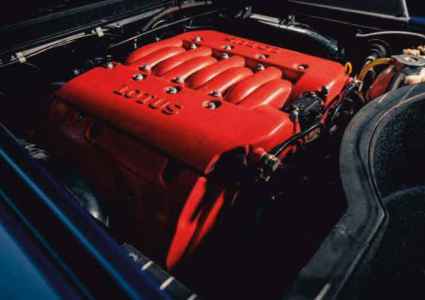 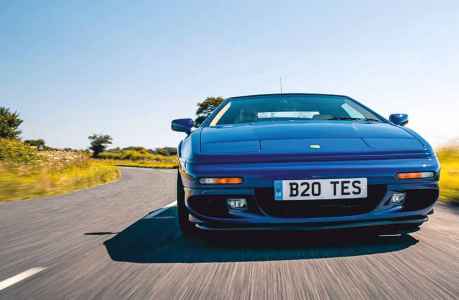 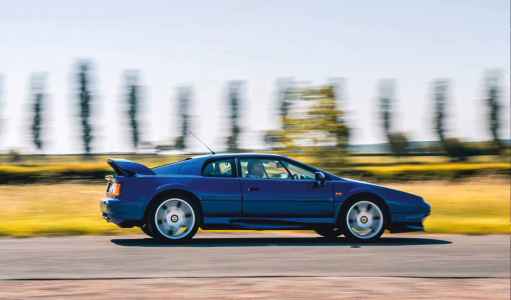 ‘As a Carlton owner I recognise this GM switchgear!’ Sam and reader Simon share a joke about the oversized gearknob ‘The steering’s very heavy – just like it should be’ ‘I like how the revs fall dramatically when you lift off – you can feel the racing thinking that went into it’ In full-fat endurance racing form, this V8 engine made 550bhp. Simon’s Esprit itch has been scratched – but has it impressed him enough to earn a place in his current six-car fleet?

So could an Esprit V8GT become Simon’s car number 50? He’s thinking about the practicalities now. ‘I imagine living with it would be like living with the Aston – similarly bespoke V8 engine, but the car’s well-made and feels dependable,’ he says. ‘You can tell it’s a Lotus engineered in the same manner as my Elite S2.2 though, in a good way – it rides beautifully and handles changes of direction so well. And that V8 really wants to go and go – the roads are the only limiting factor.

‘What surprises me most, actually, is how I’ve forgotten about the fact it’s mid-engined, and the ramifications of handling that. It’s just a very, very well-balanced and planted car, and the fact the engine is in the middle is all part of that sense of harmonious balance. You can tell how close your seat is to the centre of gravity – car and driver are as one. If I had a barn, I’d definitely have one as part of a collection of a diverse set of cars. But as it stands I have six cars and only garage space for two!

‘Only one thing though – and this really does sound like nitpicking – I’d have one from the first year of V8 production, before it lost the Giugiaro-styled interior with the boomerang-shaped instrument cluster. I know it was old-fashioned by that point but for me it’s an important part of the car’s character. Taken together, all these things would make for the perfect Esprit.’ I guess that Elise brochure can be left where Simon found it.

Thanks to Allon White (allonwhite.co.uk), where this car is for sale

These times are true for Sport 350:

I am really in big love with this last-edition-generation 1999 Lotus Esprit V8GT, put a lot of cars in it's class to shame including the 911 RS N/GT 993/996 and BMW M3 Lightweight E46. Imagine if it had gone to a Mitsubishi FQ400 instead of the V8, the timeless styling might still be in production like the Porsche 911 996. Forget Toyota powered bugs. RIP Colin Chapman.

Q: - is this fastest version of all-generations Esprit?

A: - if you mean all-stock factory Esprit - YES!