100E Ford prefect from Dagenham, Essex, to the Utmost parts of the Earth. The Ford 100E wasn’t exactly a ‘£5 POM’ but lots of them drove one. Words: Louis Kevin Shaw. Photos: Adam Croy.

Russ McIntyre is well known in hot rod circles for having built several superbly engineered top-quality cars in recent decades, so imagine our surprise when, during a visit to his home a few months ago, he announced that he was buying a 100E. Looking around at the American muscle parked everywhere in his workshop and his current ’1955 Chevy project with its 447-pluskilowatt fuel-injected 8.2-litre engine, it seemed to us that lusting after a small English car of similar vintage with a meagre 36hp (27kW) made no sense.

Sure, there are a few 100E pictures around the wall, but everyone who knows Russ thought that this was just a passing phase generated from his earlier years. However, it turns out that these little English Fords have been a passion his whole life. In fact, by the time Rus was 20, he had already owned 20 of them! For the past few decades, however, they have been on the back-burner, and, while a delivery van has been stored away for many years, we all thought that he was over them; how wrong we all were. It seems that another stock 100E was on Russ’s bucket list to go with his more performance-oriented collection.

Russ’s appreciation of the style and simplicity of these little cars should really come as no surprise, as these factors are the reason that they were built in the first place. Motoring in post-war England had remained virtually unchanged since the ’30s, with the revised models being produced based heavily on pre-war designs. The Ford Motor Company was no exception and continued to offer the same ‘upright’ cars that it had before the war and was known as a provider of cheap, no-frills motoring to the masses in the late ’40s. As such, when the 100E was launched, it was revolutionary.

As the ’50s loomed, Ford knew that it would need to revamp its range in the UK to provide something to compete with the offerings of rival companies, such as the new Minor that Morris released in 1948. In the early ’50s, Ford introduced “five-star motoring” to the UK with a whole new range of cars, starting with the new Consul and Zephyr Six.

With this success, Ford set out to build a light car to compete in price and running costs with the smallest models on the market but with the speed and comfort of the bigger cars, thus setting the trends for future light-car motoring.

In 1953, the new range of 100E Anglias was released, with the four-door new Prefect following shortly afterwards. This was a higher-spec version of the base Anglia two-door, and offered extra chromium trim, dual wipers, and twin sun visors. With the all-new modern monocoque body and a new engine and drivetrain, the 100E offered significant improvements over the outgoing models in terms of suspension, roadholding, acceleration, and comfort, and placed luxury light cars within the reach of all motorists. With beauty, spaciousness, and comfort combined with speed, safety, and economy, the 100E was true five-star motoring for the era. Within a few years, one in every three new cars in the UK was a Ford made in Dagenham.

Despite the much-improved styling and the improved performance of the new 36hp (27kW) 1172cc engine, Ford stayed with the three-speed gearbox when Austin and Morris were offering four speeds in their respective A35 and Minor. The 100E did receive Girling hydraulic brakes and a hydraulic clutch with pendant pedals, so at least that put an end to blasts of cold air in winter and heat in summer sneaking in around the pedals in the floor.

The 100E evolved during its production, both mechanically, with an upgrade to the brakes from seven to eight inches in 1955, and aesthetically, with the introduction of deluxe versions of both the Anglia and the Prefect. The deluxe models enhanced the standard versions with the addition of chrome strips down the body, chrome headlamp bezels, and chrome window surrounds. By comparison, the base Anglia and Prefect models now had virtually no chrome trim and had even gone to painted bumpers, ensuring that if you wanted chrome you had to pay to get the deluxe version.

More body alterations came in October 1957, with new grille, new front-headlight surrounds, an increase in the size of the rear screen, new rear tail lamps, and minor trim updates. Production of the 100E continued for a couple more years, with the next major rejig in 1959. This involved removing the existing Anglia and Prefect models and replacing them with an economy version of the Anglia. This was known as the ‘New Popular’, and it was available in both basic and deluxe versions, with the former truly basic. Compared with the base model, the deluxe had luxuries such as an air filter and an oil-pressure warning light, ashtrays, opening quarter-lights, a passenger’s sun visor, and other joys such as rubber floor matting and padded door trims finished with PVC, along with assorted chrome accessories.

By the time Russ’s car rolled off the production line in early 1962, sales of the new 105E Anglia were going gangbusters, and the writing was on the wall for the old Popular, with 100E production ending in June 1962.

Having rebuilt several cars and knowing the time and money involved, Russ was after a good, rust-free 100E. He’d owned 24 of these cars by then, so he knew their pitfalls and wanted the best he could find. After scouring New Zealand, he soon realized that finding a nice example is no longer an easy feat. While thousands of the cars were produced here over the decade or so of production, most that have survived the perils of 50-plus years on the road have now succumbed to tin worm.

Then, while searching the web, Russ found one that almost seemed too good to be true. Dry stored for most of its life and with all the authenticating paperwork, the 1962 car had a mere 9100 original miles on the clock. The only downside was that it was on the other side of the world, in Ireland.

The first owner put very few miles on it in its first decade, with the second owner having it for a mere six months before selling it to upgrade to a 105E. It ended up stored in a barn for the next 20 years before being rediscovered, tidied up, and offered for sale, now with 7500 miles showing. It then spent another period in storage, with the owner not wanting to increase the mileage too much, before being put up for sale again — this time with the odometer reading 9100 miles. The fact that the car came with all its documentation from new, with the original sales information intact, letters of correspondence, and receipts for maintenance and servicing throughout its life, made Russ’s decision an easy one, and the car was soon heading south to New Zealand.

The 100E was shipped here to Advanced Four Wheel Equipment, where Clive handled all the importation and customs paperwork before sending it to its new home in Puni, so that Russ could get it ready for compliance and use in New Zealand. Having got the 100E home, Russ discovered that it was not quite as original as he had thought. Disappointingly, after removing it from the barn, the former owner had decided that it needed tidying up and resprayed it entirely, rather than leaving it original; this was a shame, as they are only original once.

However, while the paint was not stock, the rest of the car was almost perfect. The engine sounds as if it has just rolled out of the factory, and 57 years later, the car still even has the showroom smell. That hasn’t stopped Russ from getting stuck into it, though, with the whole car now Dynamated and cavity waxed. All fluids have been changed, with Red Line added to the gearbox. Russ also changed the tail lights for a pair of more aesthetically pleasing 1957 units. Lap and diagonal belts have been fitted, which did mean that the car had to go through the Low Volume Vehicle Technical Association (LVVTA) certification process to get it road legal in this country.

While the low mileage was always part of the appeal, Russ does plan to use the 100E. He debuted it at the North Shore Rod and Custom Club event in April, where he took the award for best flathead engine — although he did get only half a prize, as the car had only half the cylinders of the other flathead V8 on display. Russ’s future plans are just to keep driving and enjoying 100E number 25.

The 100E is a lot smaller than the cars that Russ normally drives; in fact, it’s so small that it fits between the fog line and the edge of the road on the way to Pukekohe — somewhere Russ is getting used to driving, as the car just doesn’t keep up with the traffic at open-road speeds. The 100E is the only car that Russ has owned in the past few decades that he hasn’t fitted a radar detector to, as it doesn’t need it. 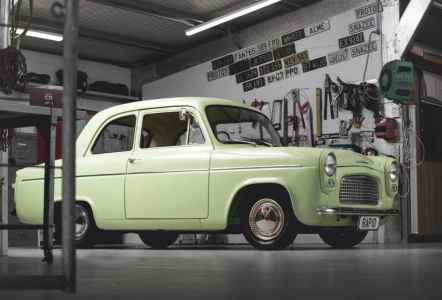 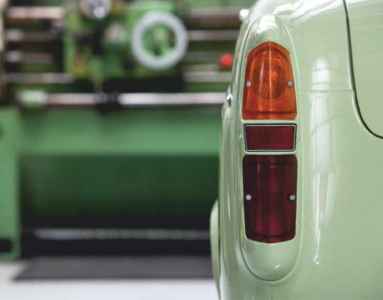 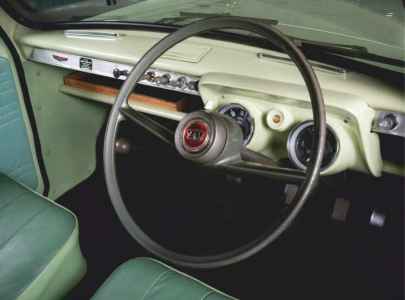 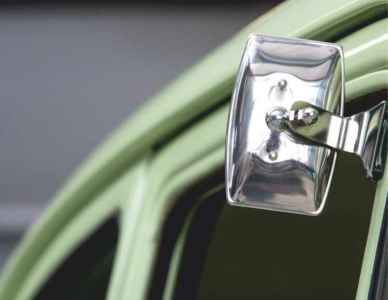 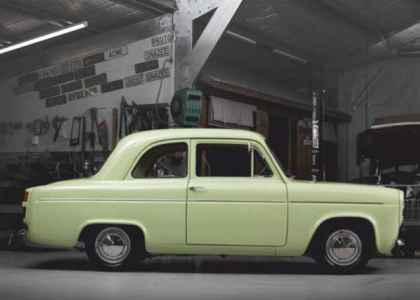 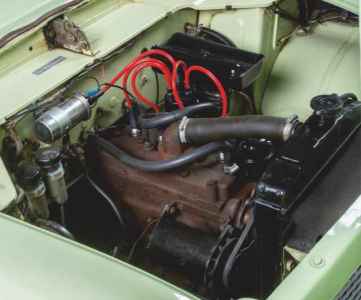 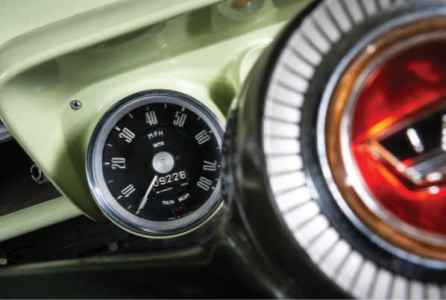 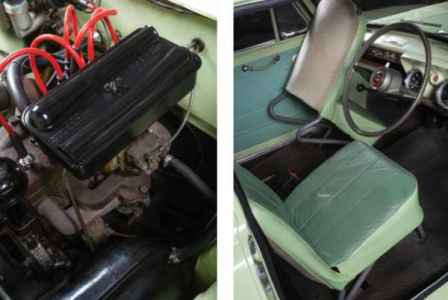 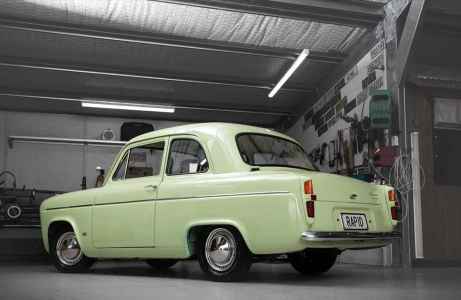 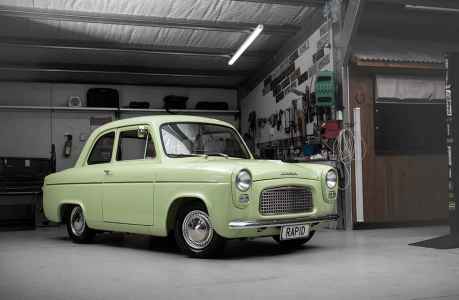 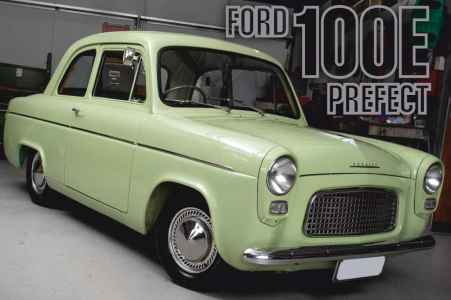 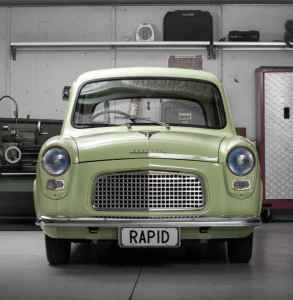 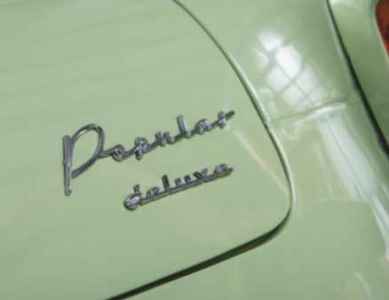 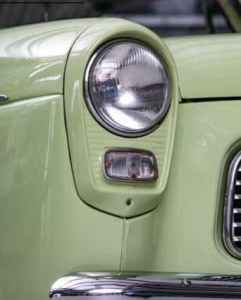 Motoring in post-war England had remained virtually unchanged since the ’30s … As such, when the 100E was launched, it was revolutionary Old style flip forward seats compliment the rest of the interior. The dashboard like everything else - just the essentials. Above: The little flathead four is a long way from today’s small Ford engines. This produced 27 kW or 36 bhp from 1172 cc.

What is it? Mustang-era Fords to bad