Taycan play that game. The electric performance car market has so far been dominated by just one marque: Tesla. But that's all about to change with the arrival of Porsche's new Taycan. Words by Jordan Katsianis.

It is inevitable, the plug’s overtake of the pump. One day, not so long from now, we could be viewing performance car favourites such as the current 911 GT3 as the swansong to 150 years of internal combustion. And this, the Porsche Taycan, is the point of no return. The scales have tipped. The brand that represents the very essence of sports car manufacturing has revealed its hand.

Tesla was the disruptor, but this is the response. Not so much a cold war arms race, more a front-line military offensive. This is Porsche putting its reputation, and €6 billion, into shoring up its position at the figurative head of performance motoring. The Taycan, with its new factory, platform and personality, has it all on the line.

It must transfer Porsche’s reputation to a new form, and because first impressions last, it can’t afford to be half-baked. That's why long before the Mission E concept first appeared on a show stand in Frankfurt four years ago, Porsche had already started development on its first electric production car. And this is the result.

The underlying chassis is all-new from the ground up, sharing almost nothing with other Porsche models due to an emphasis on packaging an entirely different kind of powertrain. In terms of dimensions, the Taycan is 90mm shorter than a Panamera, 21mm wider and 47mm less tall, but with an extremely low nose permitted by the absence of an internal combustion engine, the reduction of visual mass shrinks the Taycan further. In the flesh, it genuinely looks like a four-door 911, the frontal section dominated by haunches that frame the view out from the driver’s seat, just like in the rear-engined Porsche.

The detailing, meanwhile, is typically Porsche-sharp, with slim, near-hidden LED head and tail lights that leave the fascias clean and free of superfluous elements. But that's just the outside. It’s beneath the Taycan’s skin where it all becomes very un-Porsche...

The Taycan’s body is of mixed-metal construction, with high-strength steel, aluminium pressings and cast aluminium elements riveted and glued together. This helps keep the body-in-white weight down without having to resort to time- and cost-sapping carbonfibre. Despite this, the Taycan still weighs 2295kg overall - 300kg more than a Panamera Turbo, but 15kg lighter than the Panamera Turbo S E-Hybrid 971.

The lithium-ion battery pack is mounted under the car’s floor and has a layout that is nearly flat, with two cut-out sections behind the front seats for improved rear-passenger comfort. Adaptive air suspension will be standard on most variants, while the axles are all-new, with only elements around the wheel hubs and steering systems taken from the Panamera. Wheels will be 20 or 21 inches.

The Taycan will initially be offered in two versions, somewhat misnomered Turbo and Turbo S. A third, less-powerful model will eventually join them.

The Taycan Turbo S will hit 62mph from rest in 2.8sec. And, unlike the acceleration times you see quoted for Teslas, that figure isn’t only achievable after waiting several minutes to ‘precondition’ the batteries by bringing them up to temperature - it’s a time you can hit again and again, on demand, without the electronics deteriorating prematurely. Zero to 124mph is covered in 9.8sec, and top speed is limited to 162mph. The non-S Turbo will hit 62mph in 3.2sec, 124mph in 10.6sec and is limited to the same maximum.

‘THE TAYCAN’S INTERIOR IS PURE PORSCHE’

The powertrain’s urge is supplied by two electric motors - one on each axle - that in the Turbo S combine to create a peak power output of 750bhp, paired with 774lb ft of torque. If there is one caveat, it’s that these are ‘overboost’ peaks, only available when using launch control. Normally you’re looking at 616bhp and an as yet unrevealed torque figure. The Turbo offers the same 616bhp ‘basic’ power output, with 67lbhp and 627lb ft for launches.

Both models are rated with a range of between 240 and 280 miles on a single charge.

The powertrain is Porsche’s own, developed specifically for the Taycan. The electric motors, inverters, battery management systems and connection methods are all assembled in-house in Zuffenhausen, a mere stone’s throw from the 911 production line.

The two motors are of the permanently excited synchronous type, which have the advantages of improved power density and better thermal management compared with other electric motor types. The rear motor produces 449bhp and is the same in both Turbo and Turbo S. It drives the rear wheels via a two-speed transmission, which has been included to extend the reach of the electric motor, fostering that intense initial acceleration but then running a higher Anal ratio for sustained high-speed motoring. The difference between the Turbo and Turbo S lies in the second, front-axle-mounted units - the S getting a more potent version to achieve its higher combined power peak.

As you’d expect, Porsche’s upstanding development regime has been adhered to, with the Taycan being put through an even more intensive schedule to ensure that the electric motors and batteries can withstand any conditions without variations in performance or reliability.

The cells of the lithium-ion batteries are all temperature controlled and offer a total storage capacity of 93kWh. An 800V electrical system is used, which allows two things: firstly, the cabling routed around the chassis can be physically smaller and lighter, and secondly, 270kW charging is possible from appropriate charge points, meaning the batteries’ charge can be taken from five to 80 per cent in just over 20 minutes.

The way you control this EV’s speed will also be different to most others, with Porsche deciding to go in a different direction to the ‘one pedal’ methodology employed by many other electric vehicles. Instead of battery regeneration beginning

when the driver lifts off the accelerator, with an effect that can be strong enough to bring the car to a complete halt without using the brake pedal, the Taycan will organically coast without any regeneration (although there is an option to enable accelerator-off regen if desired). Regeneration instead occurs during the initial stages of brake pedal input, with the friction brakes then taking over when you’re deeper into the travel. The combined result should mean it feels just like braking in a‘regular’car.

Blending the two braking methods into one linear effect was one of the biggest challenges in calibration, as Porsche has been less than successful in achieving this in its current electrified models such as the Cayenne and Panamera Turbo S E-Hybrids. The Taycan’s friction brakes use tungsten-coated discs on the Turbo, signified by white calipers, and carbon-ceramic discs with yellow calipers on the Turbo S.

While the Taycan diverges from the Porsche norm in many aspects, its interior has been kept closer to the heartland, and immediately identifies itself as a Porsche product.

If there’s one crucial element that is missing, it’s a centrally mounted analogue tachometer, but, of course, here there are no revs to count (in a traditional sense). The signature row of five dials remains, however, here digitally recreated on a curved, free-standing 16.8-inch display. It’s an expensive-looking element that is just the first of multiple digital interfaces, which continue with the same 10.9-inch infotainment display as found in a current 911, but with new software to match the

Taycan’s EV capabilities. There is also an optional second 10.9-inch screen that sits to the right of the central unit and acts as a passenger display when the car detects someone is sitting beside the driver. When there isn’t, this display will either be dimmed or can show just the Taycan logo.

Porsche’s classic technique of Ailing the centre console with controls, physical or otherwise, has been replaced by yet another screen, an 8.4-inch haptic item, mounted in a portrait layout. This has the HVAC controls on the top half, and an input area below that allows drivers to swipe, prod or type commands into the main 10.9-inch system.

Other than the new digital interfaces, the Taycan’s interior is pure Porsche, with a small and perfectly formed steering wheel and an overall combination of superb build quality and material choice. It’s not as glamorous or ornate as inside a Panamera, perhaps, but this new minimalism says a lot about Porsche’s future aesthetic.

Material finishes have taken on a more environmentally friendly path, with vegan options, and there’s a wider spread of new-generation textile and multi-material finishes that deviate from the usual leather interiors of 911s and Panameras. And while rear-seat space is tight for adults, it’s perfectly comfortable once you’ve navigated the low roofline and tight rear door opening.

Below: lines reflect what a four-door 911 might look like; Taycan is shorter than a Panamera, but also wider. Below: white calipers denote the standard brakes and differentiate the Turbo model from the more powerful Turbo S. 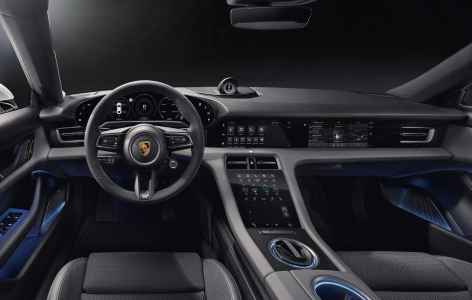 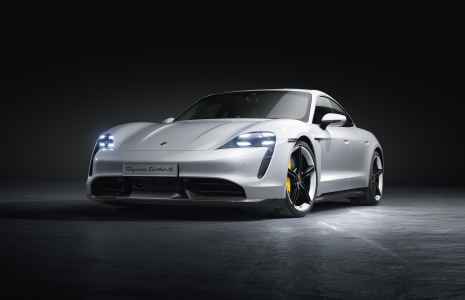 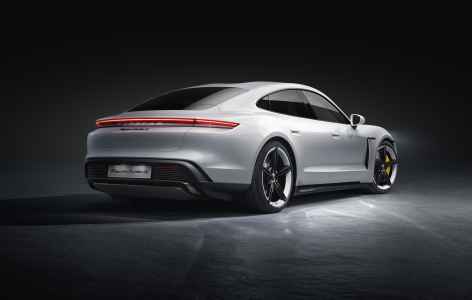 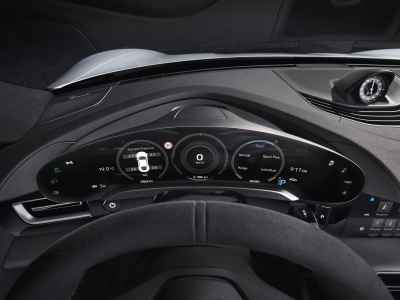 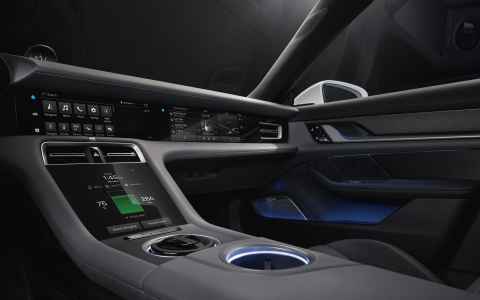 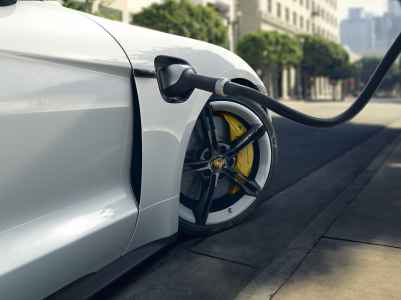 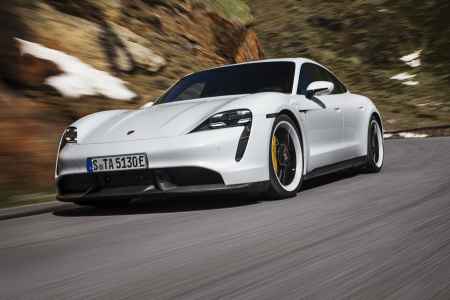 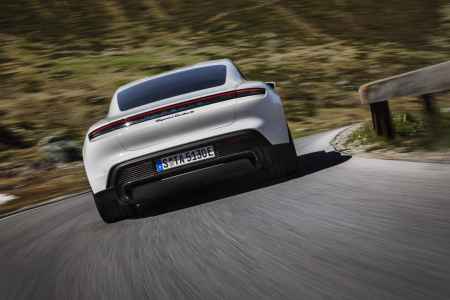 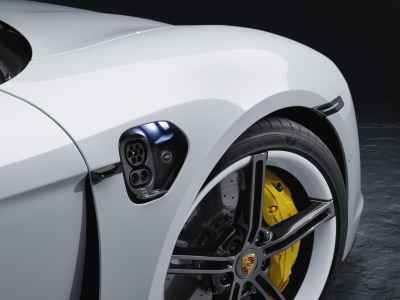 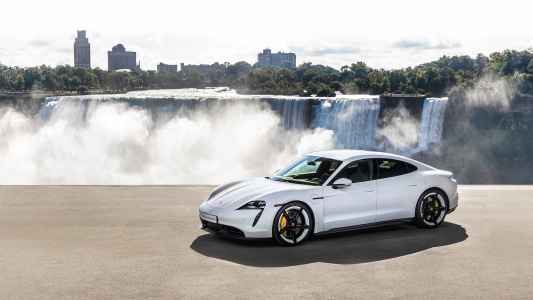 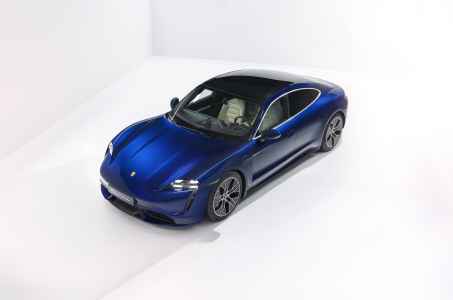 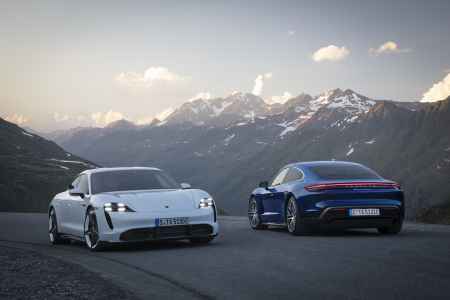 Tesla, the provocator that might be the reason we’ll have a Porsche Taycan in 2020 rather than later, pushed the boundaries, but did so without the discipline inherent in a traditional car company. Still, it was so ahead of the game that a Model S Performance (pictured right) still outperforms the Taycan on paper, and does so at a lower price.

Audi’s own version of the Taycan, the e-tron GT, is also on its way, and despite being engineered by a different team, in a different city, the challenge will be how the two manufacturers can maintain some form of their own identities in the two cars.

Less powerful and more heavy yet the panamera still probably has a better ‘ring time and top speed and acceleration at high speeds. I don’t like the Panamera 971-body styling as much though

The cost of building a 2019 Panamera 971 should be much higher than cost of building a Taycan. The price should reflect that and electric cars should be more affordable. Of course, that's not how it works in practice. They have major investment in R&D for the Taycan that they need to offset, the large battery packs are expensive too. So in the end it is not surprising that both end up roughly at the same price.

The Taycan Turbo S maxes out at 161mph, while the Panamera Turbo S E-Hybrid exceeds 190mph.

Last time i checked, they used a set of low quality conrods and bolts that ended up shooting out of the exhaust and cracking the block of the overrated 911 GT3. Can't believe anything is costly with vw group, all they do is go back to the parts bin and re-use it on other models with minor changes every 10 years.

2020 Porsche Taycan Turbo and Turbo S looks and performs nice but not for the price. This isn’t necessarily a smart car to buy. It’s just porsche’s way of saying they can build a better electric car than Tesla. The Turbo and Turbo S models are between around $150k-$180k. Other cars that are gas powered and are about as good if not better in some categories like the BMW M5 F90 cost around $100k. From 100k to 150-180k USD is a huge difference in price that you won’t make up for by having to pay money for gas and maybe maintenance for the next what, 25-40 years? Defeats one of the big purposes of buying an electric car. At least Teslas are priced similar to gas powered cars that compete with them

When having fake engine sound played through speakers is becoming a norm, why not call a car that has nothing to do with real turbos "Turbo"? The gen z buyer won't know the difference.