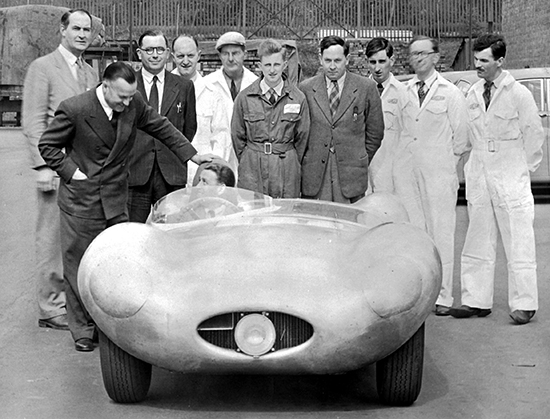 Only after Bob Knight cleared his desk, turned out the light and departed for home for the final time, did his immense contribution to Jaguar’s survival become apparent. He’d engineered the world’s finest car and then ‘saved’ the company, although not with any bold vision of the future. Knight doggedly held together Jaguar’s independent nucleus – its close-knit engineering and design teams, operating on shoestrings – while British Leyland seemed hellbent on destroying the company’s soul. History has proved him to be Jaguar’s unsung hero, manifested as a chain smoking procrastinator who drove colleagues potty with his quest for perfection.

Born in 1920, Knight attended Coventry’s Bablake School before graduating from Birmingham University with a BSc in mechanical engineering. He joined what was then SS Cars in 1944 as a technical assistant in the drawing office, recruited directly by chief engineer William Heynes who, being an instinctive talent but lacking theoretical academic education, was impressed by young Bob’s training, intellect and analytical skills.

Knight proved himself extraordinarily capable of identifying, interpreting and improving car dynamics. He was a brilliant problem solver, appointed chief vehicle development engineer in 1951. He’d worked first on the MkV saloon and then the XK120, but his expertise in chassis design was poured into the C-type and D-type, working in partnership with aerodynamicist Malcolm Sayer, whose use of applied mathematics impressed him. Knight was responsible for the C-type’s pioneering disc brakes in 1953, a hugely significant sports car breakthrough.

When Jaguar switched its racing programme into what became the E-type, Knight was absorbed in every aspect, but his personal triumph was its rear suspension. It gave the E-type its sophisticated compromise between roadholding and ride comfort. The story is told of Knight completing the design in 27 days, to win a £5 bet from Jaguar founder William Lyons that it couldn’t be done in a month.

By 1960, Bob Knight was supervising all Jaguar development, taking Heynes’ position as chief engineer three years later. He wasn’t a keen driver, so chief test driver Norman Dewis made an ideal partner. Knight left the highspeed stuff to Dewis, while he finessed ride quality and the suppression of noise and vibration, becoming a world-leading guru.

Via the S-type, Knight’s independent rear suspension migrated to the XJ6 – Jaguar’s masterpiece. His fingerprints were all over its exceptional road manners, and included working with Dunlop to custom-design its fat tyres. The later XJ12 was universally hailed as superior to any other luxury saloon. ‘The idea that development towards the ultimate should ever stop is anathema to Bob Knight,’ wrote Jaguar chronicler Andrew Whyte. ’He never failed to use every last available moment to perfect some detail.’

Knight was accustomed to working on slender resources but via short chains of command to produce engineering alchemy. Then, in 1968, the company became part of British Leyland. Jaguar alumni, including Lyons, retired or passed away, and Knight found himself the lone defender of its modus operandi, doing everything in his power to resist having Jaguar’s engineering base diluted by being folded into Rover or Triumph.

In 1973 he’d begun work on the new XJ40 programme, but BL kept him chronically under-funded, so the project was in near constant limbo. Most of his energy went, as one observer put it, on ‘a protracted campaign of non-cooperation and stubborn refusal’ to keep Browns Lane’s sparse design and engineering facilities intact. BL reclassified it in Soviet style as ‘Large Car Plant No 2’ but Knight kept the increasingly ragged Jaguar Cars Ltd flag flying. In 1969 he joined the Jaguar board. For three years from 1975 he was in unofficial charge of the company, although as many colleagues regarded him as a solitary figure, unmarried and with nervy habits like constant hand-washing, this wasn’t a role he was cut out for. Yet he received a CBE in 1977.

Between 1978 and 1980 Knight was, officially, managing director, but he couldn’t prevent build quality nose-diving nor see off every stupid diktat from BL head office, such as that XJ6 colour choice be limited to red, white and a horrible yellow. He turned down the chance to oversee all BL’s engineering and refused the ‘opportunity’ to install the Rover V8 in his XJ40 (he shaped the engine compartment so it wouldn’t fit anyway!). A more robust defender of a marque’s core values is hard to imagine.

When John Egan arrived in 1980, he implored Knight to stay as MD, but he chose to retire. ‘He was a very fine and meticulous engineer,’ says Egan in his new memoir Saving Jaguar. ‘Bob had been forced to put up with all kinds of nonsense from his superiors. He was tired of fighting Jaguar’s corner.’

Knight left Jaguar with a decent severance and his personal Daimler Double Six Series II, which he kept until his death in 2000, aged 81. He found consultancy work for Rolls-Royce, Dunlop and more. Meanwhile, Egan made good on his promise to rejuvenate Jaguar, and Knight’s precious XJ40 finally emerged in 1986.