style=”flat” size=”4″]It takes some skill to overcome a 160hp loss over the off-season and still win the championship, but then again, Jim Richards never lacked skill. And neither did Sir Frank Gardner or his JPS team, who put together an E24 for the 1985 Australian Touring Car Championship that, despite the power loss the change from Group C to Group A rules necessitated (they had to go from the 24-valve, 455hp M88 to the 12-valve, 295hp M30), still managed to win seven out of ten races that year and all bar one round of the Australian Endurance Championship (where ‘Gentleman Jim’ was paired with Tony Longhurst). It is, no doubt, also testament to the fantastic base BMW provided them with in the first place.

However, few fairytale runs last, and so it proved in the ‘1986 season, where an ever-strengthening opposition (led by Robbie Francevic in his turbo Volvo) overtook the now-ageing BMW and relegated Jim to third overall. However, the 635 did still win the endurance championship after a win at Amaroo Park, a second at Surfers Paradise, a fifth at Sandown (again shared with Tony Longhurst), a sixth at Bathurst, a third at Calder Park and finally another second at Oran Park in December.

It’s important to note, though, that while Jim and the JPS team only finished third for the year, it wasn’t for lack of trying to get the most out of the soon-to-be-retired E24 chassis. Knowing they would be in for a hard fight in 1986, Gardner and his team at their Terrey Hills workshop in Sydney’s north built a car some thought was even better than the Schnitzer cars out of Germany. Starting with a slightly stiffer chassis, thanks to a second rear cross brace on the bolt-in aluminium cage (safety regulations being rather different back then), they also increased wheel sizes from 16- to 17-inch, fitted wider rubber and made revisions to the engine via an improved head, intake, exhaust and exhaust manifold. The result was an estimated 25-plus horsepower gain and more grip. 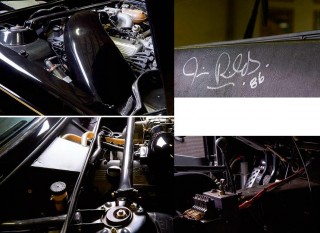 Combined with the already stable handling of the long-wheelbase chassis, these changes meant that, while still down on power compared to its rivals, the ‘1986 model 635 CSi was at nowhere near the disadvantage that you’d think compared to cars like the aforementioned Volvo and George Fury and Glen Seton’s fire-breathing DR30 Skyline.

“Jimmy Richards, who raced every 635 they had except for the very first one, tells everyone that it is the best one they ever built,” says current custodian Chris Bowden, whom you’ll likely remember from our other features on the Bowden Collection’s rare, classic BMW racers. “It was the last one they built, and all the evolutionary updates and tricks the JPS team had learnt along the way got poured into that one chassis. It was a pretty special car.”

Special yes, but not perfect. Trying to screw that much power out of such an inherently compromised engine meant driveability suffered, with Chris saying that “there’s literally nothing going on below 4000rpm”. Combined with a lack of power steering, the huge amount of caster and the wide slick tyres it runs, he says getting it out of the pits is “an absolute nightmare”, and apparently it doesn’t even get that much better on track until you’re pushing it to the ragged edge: “It’s basically set to kill, which is beautiful when you’re on a race track and up it, but in every other scenario it’s just hard work.” Jim himself clearly agrees with this assessment, saying in a past interview that “it was the best 635 I drove… you had to drive it hard, though!”. 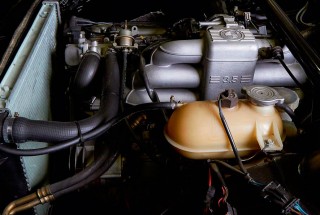 While this all makes it sound like this machine was a bit of a monster, it was still a total peach compared with some of its Group A rivals, due to BMW’s emphasis on total balance over outright power. “You get out of your 1986 635 and you step into, say a 1987 Group A RS500 and they’re an absolute handful,” Chris says. “Every single lap, you’re having a stoush with it, but the 635’s just lovely. Really, really nice.” He goes onto state that as a result, if he was in an endurance race, he’d choose a 635 every time as “they just look after you the whole race”.

“Maybe that’s a little bit of a BMW calling card, actually,” he says. “I can’t think of one BMW I’ve ever driven where the engine overpowered the chassis. The chassis are always extremely well-built, so it makes for a very nice, stable car.”

So how did this last ever factory-built JPS 635, a machine with such a great pedigree, make its way to the Bowden Collection? Well, after it was retired, Gardner sold the car to an old friend, Canberra car dealer and amateur racer, Ray Gulson, who also got a log-booked spare Schnitzer shell for his troubles, along with the usual spares like engines and diffs. Ray campaigned the car, along with son Graham and daughter Tania, for over a decade, and actually raced it for so long that Gardner was able to come and help spanner for the team after he retired. 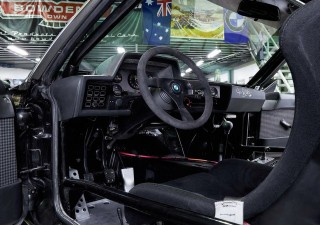 Clearly, Ray enjoyed the car just as much as Jim did too, as one article quoted him as saying the 635 was the best race car he’d ever owned, complete with “sensational” handling and fantastic reliability.

However, even though he loved the car so much he kept it for five years after Australian rules banned Group A machines at the end of 1993, eventually a desire for business-related expansion capital pushed him to sell it in 1999 to a Sydney BMW dealership. Apparently, at this point BMW Australia itself stepped into restore the historically-significant car at a cost of AU$150,000 – a fortune back then – but the level of work done meant the car was essentially concours condition afterwards, and while the company did originally plan on keeping it to maximise its investment, it later changed its mind and it ended up going to Chris Bowden’s dad, David instead.

“I was away at uni at the time and just came home one day and there it was,” says Chris. “I just couldn’t believe it. It had just been freshly restored by BMW, so it was like a black diamond. It was just flawless. And of course, the spare chassis came with it, which in itself was quite amazing. We did wonder why we’d want the shell but it turned out to be a proper motorsports shell and just in beautiful condition. It’s quite a piece so it’s funny how that all came together!”

Indeed, such was the restoration quality, Chris says he and his crew at Ecurie Bowden have never had to do anything mechanically to keep it running bar change the fluids and put fresh rubber on. “The people who restored it for BMW (Chris believes it was likely to be Paddington Smash Repairs in Sydney for the body and Ludwig Sinauer (Team JPS’s chief engineer in ‘87) for the mechanicals), my cap’s off to them, period. They did an incredible job. When the car was done, it could have gone to Pebble Beach. Very, very impressive. Even to this day, it’s got the same engine as in the mid-to-late ‘90s when they finished it and it’s still the same running gear. We have not had to change a thing on it other than the rubber and fluids. It goes like a jet.”

Having spent time looking around the car during the shoot, we can confirm every word Chris says, too. The race car-thin paint and iconic gold JPS stickers are still immaculate (no doubt helped by the fact Chris’ brother, Dan, runs the Bowden’s Own car care products business) and every mechanical component is flawless, to the point where even the radiator is still mostly unmarked on the inside.

There are a couple of fun little details, too. Look under the regular fuel filler flap and you’ll see an Anderson connector for the battery instead, thanks to the dry-break connectors in the bootlid, and of course, you’ll also note Gentleman Jim’s signature on the dashboard when you poke your head inside. While we’re on the subject of the interior, as with all the Group A E24s (despite weight-saving measures), most of the front half of it, right down to door trims and full dashboard, is still there, which is rather amusing in this day and age. 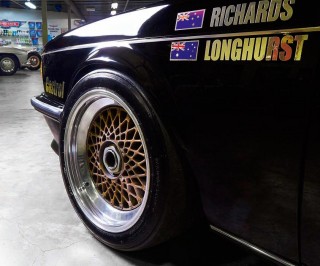 What doesn’t age at all is this car’s aura. There is simply nothing like standing in front of a genuine Group A legend, especially one that combines the stunning black and gold JPS livery with the equally stunning lines of the sharknose E24. Even by today’s standards, it’s a big car, but has any other large, classic coupé ever managed to look so right? We may be biased, but we think there simply isn’t a bad line, angle or detail on the thing. Like all Group A cars, it also shares that wonderful mix of relatability and mysticism. You know this is basically still the car you could buy off the showroom floor at the time, but equally, there’s this feeling of it being unobtanium, thanks to the knowledge that so much skunkworks expertise went into these machines that replicating them exactly without the actual parts would be nighon impossible. It’s a heady experience.

The great thing is that, like so many of the Bowden cars we have featured over the last 12 months, this particular beast will roar again in anger sometime in the future, too. It won’t just be another classic race car holed up in someone’s collection, never to move again. It will compete. It won’t win, because as Chris points out, Australia’s historic Group A racing rules mean you can run anything up to the 1993 local Group A cut-off (which therefore allows monsters like R32 GT-Rs and RS500s), but that’s not going to stop him having fun. Neither will the car’s incredible condition, because let’s face it, if your team can restore a crashed JPS Group A E30 to the condition of the one in our September 2016 issue, a few paint chips here and there aren’t likely to phase you. It’s great news, and no doubt Australian race fans will be rubbing their hands together in pure delight at the prospect of seeing this lithe beauty stretching its legs once again…