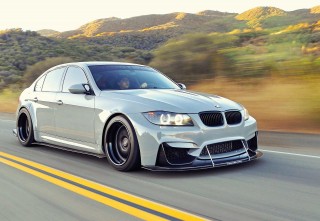 First class WTCC-style BMW 335i E90. Full-on wide-body beast Words: Daniel Bevis Photos: Peter Wu When it came to choosing his first BMW, Alex Aguiniga knew exactly what he wanted and, while he didn’t initially imagine it turning out like this, every element of the build is pure class…

The answer to the question ‘What was your first BMW?’ is often necessarily unimpressive. For most people my age (it begins with a three, that’s all I’m saying) the response is usually something like an E30 316i, or maybe an E36 3i8i, which were cheap, abundant and disposable back in the pre-Facebook era. My own first-timer was perhaps an anomaly, being a 1974 2002 Touring with twin 40s and a roll-cage, although to be fair it wasn’t my first car, merely my first BMW – I’d had maybe 20-odd cars before that. Still, the point is that most people’s first Beemer is something lukewarm; a gateway drug rather than a pure, uncut vial of mischief. 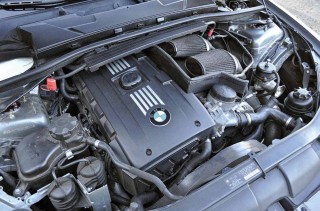 That’s not the case for Anaheim-based graphic designer Alex Aguiniga, however. He’s gone in hard and strong with an E90 335i. And, as you can see, it’s not exactly running the same sort of spec as your dad’s golf buddies.

“I’ve been into BMWs since I started driving in my early teen years,” he explains. “It’s the first car I wanted to buy with my own money. Why? I mean, why not? It’s a luxury sports car with a lot of potential. What 18-year-old wouldn’t want a BMW?” It’s a fair point. And being a hardworking, creative type of guy – at 22, he’s now a designer for Live Fit Apparel – Alex found himself with the means to make that particular dream a reality.

“I clearly remember the day I knew I wanted to buy this specific model,” he reminisces, misty-eyed. “One of my childhood friends had an E92 335i at the time when I had just got my driving permit. Long story short, she left it at my parents’ house for the weekend and I was able to sneak away for a little drive…! I will never forget how shaky my whole body felt while stomping down on that gas pedal - the acceleration on the car was like nothing I’d ever experienced. After that day I just couldn’t get over how fast the 335i was, and I set myself a goal to buy one, one day. Two years later, I was able to accomplish that goal.” 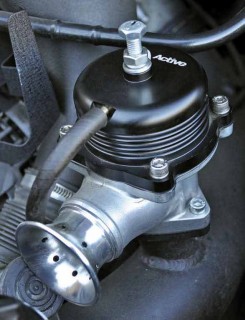 Ah, happy endings, eh? Alex found a tidy 2009 335i four-door at a local BMW dealership, a certified pre-owned vehicle that he knew he could put his faith in, pretending to be sensible while handing over the readies for this fundamentally quite silly car. But of course, this colossal exercise in life-goal box-ticking was merely the tremulous precipice at the very lip of the rabbit-hole.

“I didn’t have any plans for the car at first,” he admits. “It was crazy, I was just so excited to have bought my first car, my first BMW – I honestly jumped right into it without even looking at any other options. Rookie error!” Alex is being self-effacing here, of course, as there’s no hint of an error in play here; he’d bought himself a fi ne example of a sought-after car, and it was the perfect base for some pretty radical plans. Sure, he hadn’t specifically mapped out those plans yet, but the potential was already bubbling away.

Before long, Alex was weighing up the idea of giving the exterior of the car something of an aesthetic makeover, and it’s fair to say that he wasn’t planning on going off half-cocked. This would be no wishy-washy application of a few bolt-ons, this was real go-big-or-go-home stuff. And it really doesn’t get a lot bigger than a WTCC wide-body conversion.

“Deciding how to style my car wasn’t hard at all,” he grins. “As a designer, it came very easy when deciding what to do with it, and I even made a bunch of Photoshop renderings of how I wanted it to look before actually coming to Long Tran and telling him what I wanted. After showing him my renderings and explaining specifics, he took it from there.”

You may be familiar with Long – he’s the effervescent powerhouse behind the iconic LTMW shop, the El Monte, California-based outfit well established in the game of taking hot BMWs - and other brands - and making them world-class. With Alex’s renderings in hand, Long forged onward with a World Touring Car Championship-style E90 kit, comprising hugely broadened bumpers, racy skirts and, most impressively, steroidally-expanded wings all-round. Just take a moment to appreciate the sheer girth of the thing, it really is quite incredible; yes, we’re somewhat spoiled in today’s tuner scene by the likes of Liberty Walk, Rocket Bunny and all those advocates of horizon-broadening body styling (both literally and cerebrally), but harnessing the functional width of a race car is an entirely separate approach. It feeds into the same fashionable arena, but its roots are planted in something that has existed in motorsport from time immemorial, stretching the car’s body around the grippier footprint. 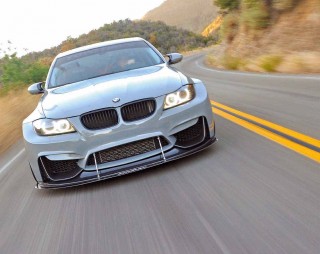 The outrageously pumped-up body was then all tastefully resprayed in Audi’s bang-on-trend Nardo grey paint, offering an ironic twist of subtlety to the in-your-face aesthetic, before being treated to a full aero kit from Aeroflow Dynamics. Naturally such a cosmically broadened silhouette required some rather wider rolling stock too, as the standard wheels would have been totally lost in those cavernous arches, and to that end Alex has seen fit to bolt on a set of super-chunky 18” Forgestar M14s. These measure 11” wide on the front axle and a frankly ludicrous 13” at the tail end, and such supercar girth necessitated a colossal contact patch, the sticky R888s weighing in at a meaty 335-section at the rear. That’s the sort of tyre width that was once the sole preserve of Italian exotics, it’s nuts.

Speaking of nuts, it’d be crazy to do all of this work without doing something sufficiently significant to the suspension too. There was no way it was staying stock – it’d look absurd all the way up there, struggling for oxygen with all that altitude – and, having weighed up the options, Alex opted for air-ride. No point rolling static only to be buying a new front splitter every week, right? So a fresh Air Lift install found its way in, meaning that he was actually able to use the thing with real aggression, park it hard, and also still get up his sloping driveway!

As you’ve probably gathered, Alex’s approach is a holistic one, so with the looks and the chassis taken care of, it was time to start tinkering under the bonnet. OK, the memories of being blown away by the grunt of that N54 were still fresh, but there’s always more you can do to get your palms sweating. The solution in this case came in the form of Burger Tuning’s celebrated JB4 performance tune, along with an AFE dual-cone CAI, front-mount intercooler, cat-less downpipes and a custom exhaust by LTMW that finishes with 4” tails. Because fast is good, but faster is better. 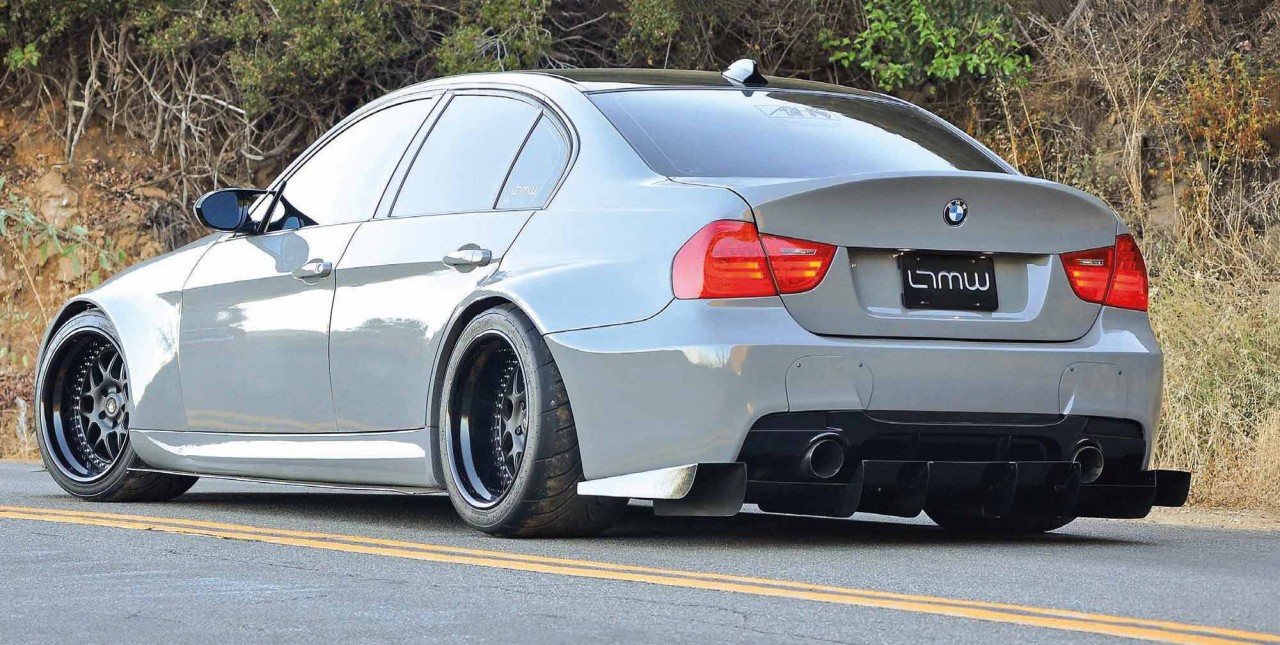 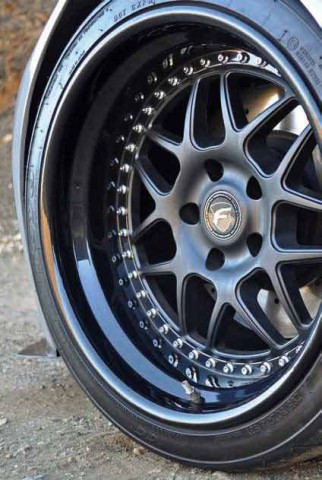 “It was an extreme makeover, no lie,” he laughs. “The car was under the knife for a good eight months, waiting for parts to arrive, and for the paint, and all of that. My favourite modification? Damn, that’s a tough one… I love every part of it, but if I had to choose then I’d probably say that the front end is my favourite. It’s just a unique look, you won’t find another one like it! Long was able to get a genuine M4 bumper and mould it into the wide-body – it’s basically an E90 body with an M4 facelift on steroids! The best part about it is that I can still run OEM F8x front lips and splitters, unlike all the replica M4 bumpers out there.”

So with every element of the car comprehensively modified, is Alex able to take a step back, view his first BMW with fresh eyes, and allow himself a breather for a moment or two? No, of course not. Modding is like a drug. “It really should have a single turbo,” he ponders, “and a manual swap, and a carbon fibre roof…” Who’d have thought that one sneaky drive in a mate’s E92 would have ultimately led to all this? As first projects go, the quality of this is pretty unbeatable. And as for first BMWs? Well, there’s not a lot of people who can tell a story as cool as this one­. 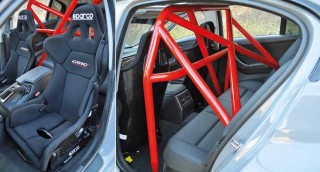 18” Forgestar M14s measure 11” wide up front and 13” at the rear. Active Autowerke charge pipe and BOV. Carbon front lip with custom splitter. Carbon side Splitters. A manual gearbox swap is on the cards. Sparco Grid 2 seats and custom four-point roll-cage fitted inside.

“It’d be crazy to do all of this work without doing something sufficiently significant to the suspension too and, having weighed up the options, Alex opted for air-ride”

“This would be no wishy-washy application of a few bolt-ons, this was real go-big-or-go-home stuff. And it really doesn’t get a lot bigger than a WTCC wide-body conversion” 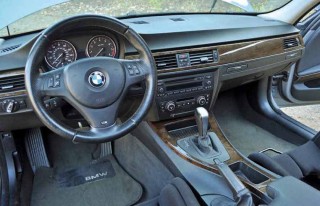