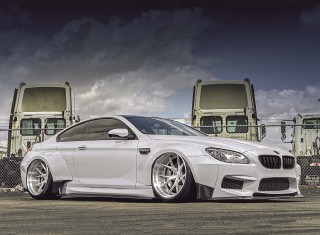 Consider the BMW M6. If you’re looking for a fast, luxurious and discreet form of transport then it really takes some beating. The performance is absolutely astonishing – it’s one of the fastest things we’ve ever driven and that was in stock form; it feels seriously opulent, with a cabin that’s really a cut above, and while it’s an imposing-looking thing it’s not exactly an in-your-face machine, and that’s a big part of the appeal for a lot of customers. Not everyone wants their high-horsepower monster to stand out from the crowd; the ability to blend-in and go about your business unnoticed is most definitely a good thing for a lot of people. Sure, slathered in striking Sakhir an BMW M6 is not a shy or retiring machine, but coat it in a more subdued hue such as grey or black and it will slip through traffic virtually unnoticed. However, that’s not much cop when you’ve chosen an M6 and want to use it to show-off the skills of your forged wheel company at their absolute best; that requires a car that’s going to get noticed wherever it goes and that will allow you to build just about the wildest set of wheels imaginable. Taking all that into account, we reckon David Batarseh has ticked all the boxes with his M6 build… 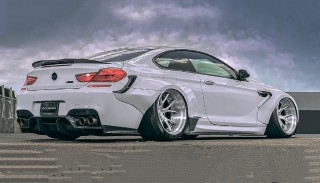 “Currently the car has MSR intakes, which I love! The sound is amazing. It’s also running a Weistec tune, which is also amazing, and I currently have an Armytrix full exhaust and downpipe system”

If David’s name isn’t familiar to you then the name of his company most definitely will be as he runs MV (Modular Velge) Forged, creator of some stunning multi-piece offerings that grace some of the wildest builds around the globe, and that includes his own. He is a BMW fan through-and-through and this M6 shares garage space with an E30 Cab that’s undergoing an M3 conversion, two diesel X5s, an E46 M3 and an F10 528i, a collection that covers just about all bases and he really has his dad to thank for his passion for all things Bavarian. “Growing up, my father only drove BMWs and nothing else. He always bragged about BMWs being the best tech and performance cars on the road. It was when I first laid eyes on an E46 M3 that got me hooked. So, you can say my whole life I’ve loved BMWs. My first BMW was a 1997 E39 528i. I loved the E39 5 Series chassis growing up as well and I came across a great deal for one when I was back in high school, so I picked it up and boy was I happy,” he grins and that was the first of many BMs that David has owned over the years, which is saying something seeing as he’s only 27.

“I’ve had so many BMWs in my life already but I’ll name a few,” says David. “My first car I modified was a 2003 BMW E46 330Ci when I was in high school. I had some wheels and springs and that was pretty much it. I moved up to a 2005 BMW E60 545i with full Dinan stage 5, Prior Design custom front bumper, iForged wheels, KW coilovers and M5 conversion. I also had another BMW F13 M6 which was the first bagged one in the world. It had a full Vorsteiner kit, MV Forged SV1 three-piece wheels, VF Engineering tune, wrapped satin dark grey, and a GT Haus exhaust. I loved the M6 so much that after I sold my first one I couldn’t see myself in anything else. I almost purchased an Audi R8 but hated it so I decided to go back to another M6 but this time really build the car fully. When I started shopping for one I came across mine with the Sakhir orange interior so I had to pick it up,” he grins.

Now, despite having a plan for his M6, even David didn’t expect to end up taking things as far as he did; “I knew I wanted to do something but I never thought I would end up cutting it up the way I did. But I’m this far in so I might as well keep going!” he laughs and we can totally get behind that way of thinking. We might as well just get stuck into the look of this thing because it’s easily the most striking aspect of this whole build. Regardless of how you may feel about wide-body kits you can’t deny that in terms of sheer head-turning presence, this M6 delivers in spades and looks absolutely epic, and this kit is no off-the-shelf offering, as David explains.

“I originally wanted to make a GT3 M6 wide-body. I approached PSM Dynamic since they have been making carbon fibre wide-body BMWs for a while now. They said they wanted to actually make a one-off wide-body kit for the M6 so I gave them the car for eight months and this is what they created.” The kit itself is made entirely of carbon fibre, which makes it even more awesome than it already is, and coupled with the numerous aero additions across the body it just looks so outrageous. It’s positively indecent, it’s just so wide and we can’t get enough of it. The front bumper wears an angular, full-width carbon splitter that looks like some kind of weapon from Star Trek (yes, we know what it’s called, no we’re not writing it down here…), then you’ve got those fat front arches with vents on their trailing edges, there are carbon side blades and then it all just goes completely insane once you get to the rear. Firstly, the rear arches are just gigantic, massive and angular and completely outlandish; they’re bolstered by those carbon winglets just in front of them and they’ve got carbon-trimmed vents at the back. There’s also a carbon boot spoiler and then you’ve got this huge diffuser array – also carbon, of course – with vents and fins and there are additional carbon blades that protrude from the sides of the rear bumper. It’s just so full-on and it takes the M6 to a whole other level, while the gloss Storm Grey wrap works so well, offering the perfect colour contrast to those sexy slivers of carbon visible across the body. 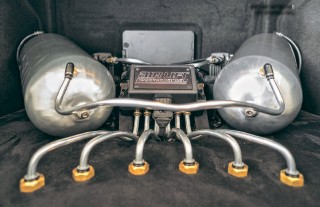 So what’s the perfect suspension choice for your one-off wide-body M6? Why, a one-off air-ride setup, of course; “We did a custom, one-off Air Lift 3H air bag system. This was the same system that I had on my previous M6; I wanted to be the first to bag an F13 and I pitched the idea to Cody over at Status Automotive who specialise in air suspension and they finished within a month! The car rides beautiful!” grins David and not only that but it looks awesome too, like a spaceship that’s just touched down. Of course, with air on board and that incredible wide-body, this build needed a set of wheels that would do the whole thing justice, as well as adequately filling out those vast arches.

This demanded a seriously impressive set of wheels and David has delivered; “I wanted something that would show off the brakes and get some really deep concavity,” he explains. “We ended up going with a set of 12x21” front and 14x21” rear MV Forged SV1 Corsa Series Super- Deep Concave wheels. I had to relocate some parts on the front to clear the turn radius due to the front width. At the rear I could have easily fitted 15x21” wheels but no one makes a tyre past a 355/25. I do have full titanium MV Forged grade 5 hardware, MV Forged titanium custom locking wheel bolts in a polished finish and the wheels are fully hand-brushed with a clear coat,” says David and we have to say they look absolutely amazing. 21s are the perfect size for the beefy M6 and the widths are just outrageous, delivering both the most incredibly deep dish but also incredibly deep concave faces, giving David the best of both worlds, while the brushed finish is simply beautiful. As for those brakes that David mentioned, that would be the absolutely vast Brembo BBK that’s been fitted front and rear, with custom-polished calipers, six-pots up front and four-pots at the back, both clamping massive drilled discs. 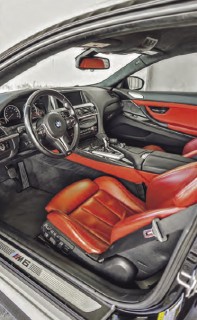 Compared with the exterior, the interior is rather virginal, though to be honest that striking Sakhir leather works well enough on its own but there is a lot more to come here. “Right now, I am making a full Studio RSR roll-cage, fully-custom Dinmann carbon steering wheel and some parts in carbon fibre for the interior,” says David, which will really step things up a notch but at east one thing he doesn’t have to worry about is the boot build as he’s got a seriously nice air install on board, with a twin-tank, twin-compressor setup that’s simple but smart. Of course, with this being an M6 it’s never just going to be about the looks because there’s not a single person on the planet with an S63 V8 who’s capable of leaving it stock and David is no exception. “Currently the car has MSR intakes, which I love! The sound is amazing,” he grins. “It’s also running a Weistec tune, which is amazing, and I currently have an Armytrix full exhaust and downpipe system,” and that combo delivers a hefty hike in power, and noise, giving this M6 the go to match that incredible amount of show.

Impressive as this M6 is – and it is very impressive – this is only phase one of this build and the second stage is currently well underway. “It originally took a year to finish the car but it’s never truly finished, I am always adding parts so it isn’t over yet!” laughs David. “The car is currently going to be the first-ever F13 M6 on the all new Weistec W3 turbos and tune. It will push around 900hp to the crank and 750 to 780 to the wheels,” he grins. “Since I am upgrading the turbos I want the car to be louder. We are in the process of making a one-off, full titanium exhaust system with MSR Performance with Fabworx downpipes. I’m also doing an SSP clutch kit installed by Mike over at Precision Dynamics Motorsports. I’m going to do a full paint job or wrap and I’m also going to change the colour of the wheels and make them wider, and add a little more PSM carbon parts on the front end,” all of which is going to take this M6 even further than it’s already gone, which is really kind of hard to imagine. David is planning to get everything ready for SEMA so we’re not going to have to wait very long at all to witness its final form and, when we do, it’s going to totally blow our minds, but what else could it possibly do when it already looks like this? They say less is more but they’re clearly wrong and we couldn’t be happier about that. 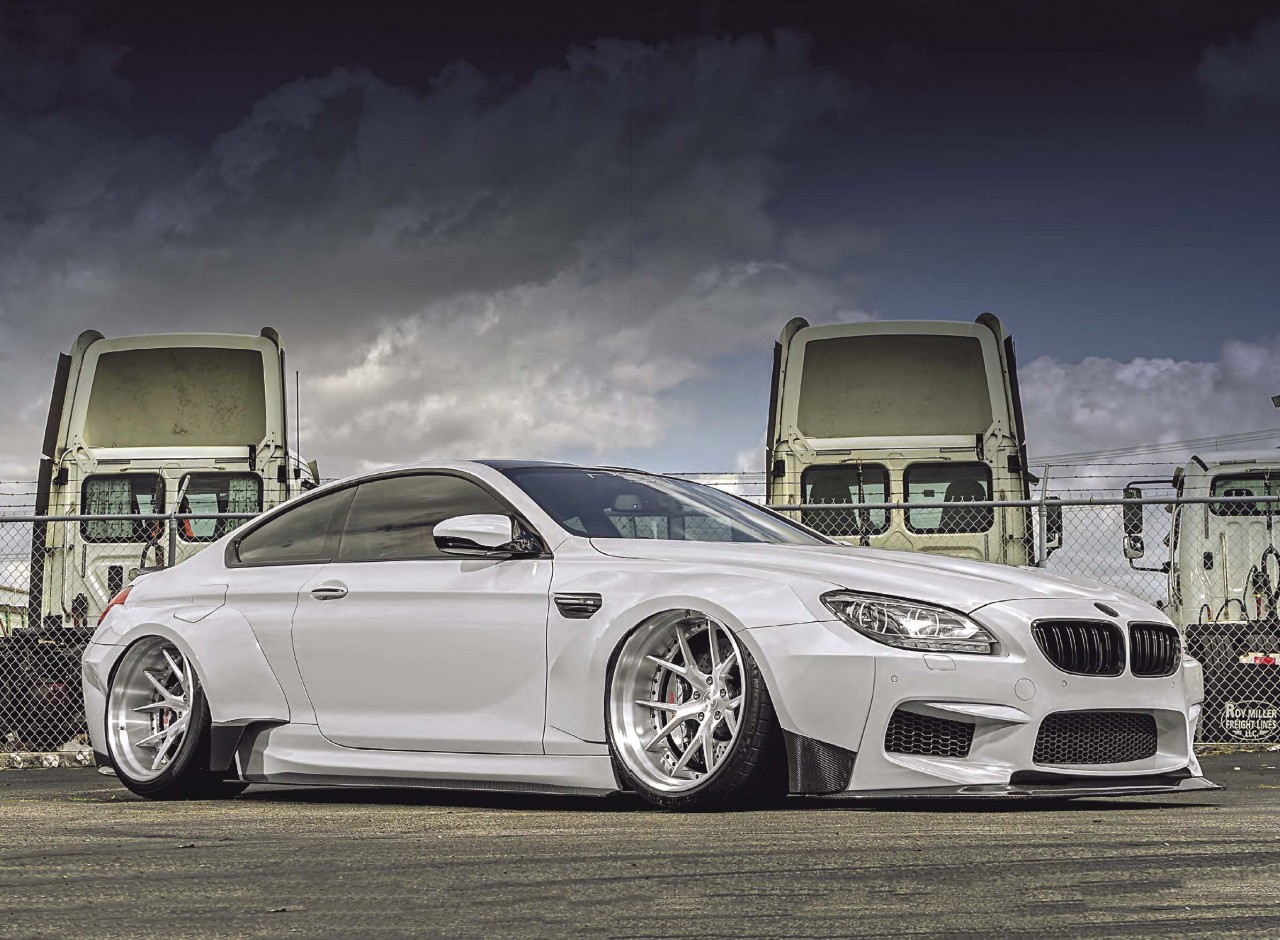 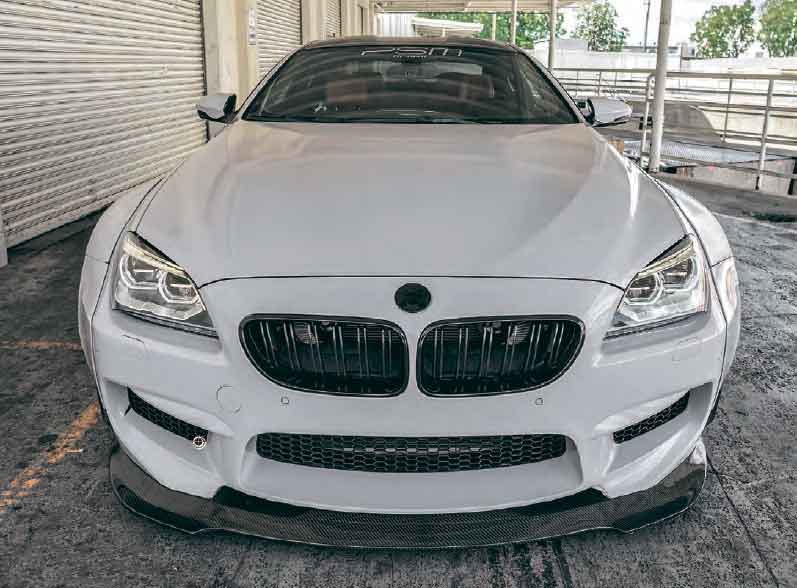 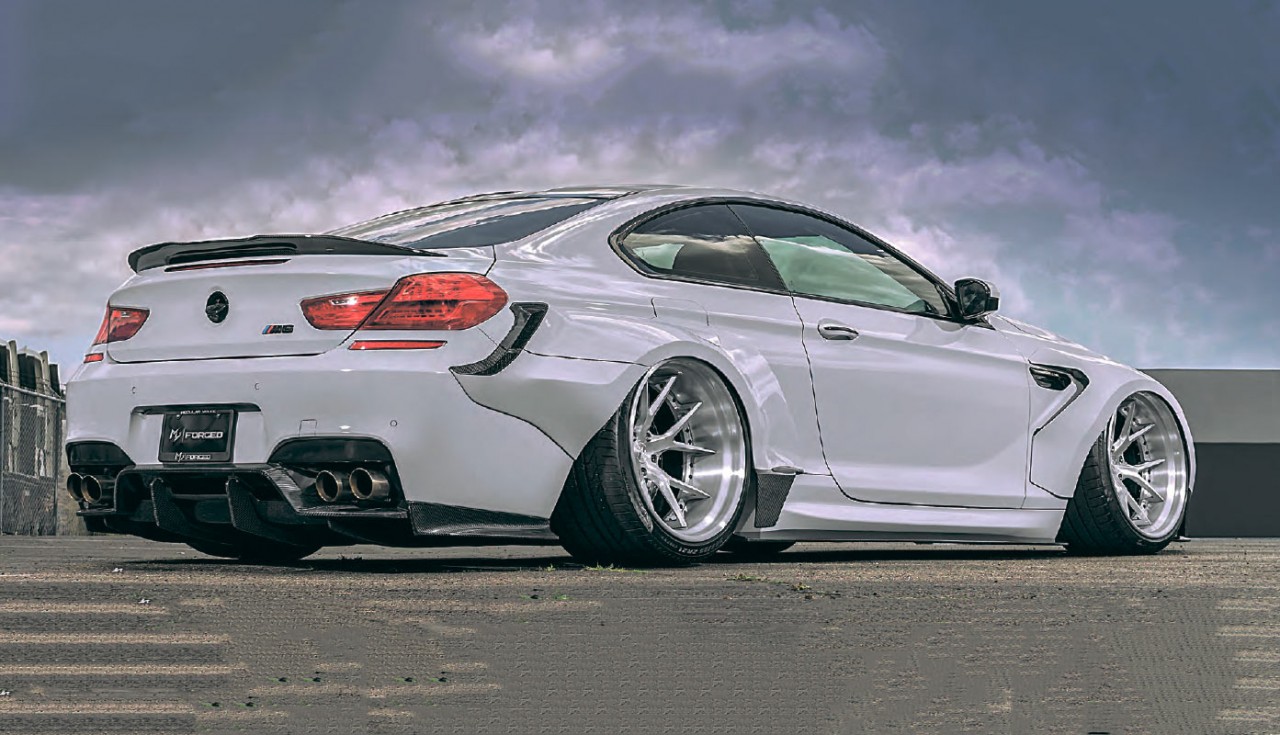 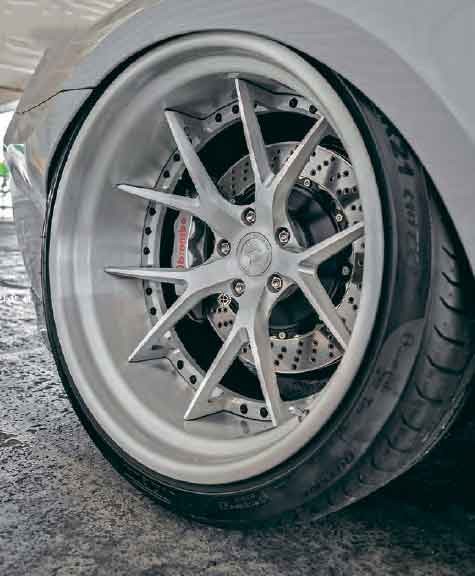 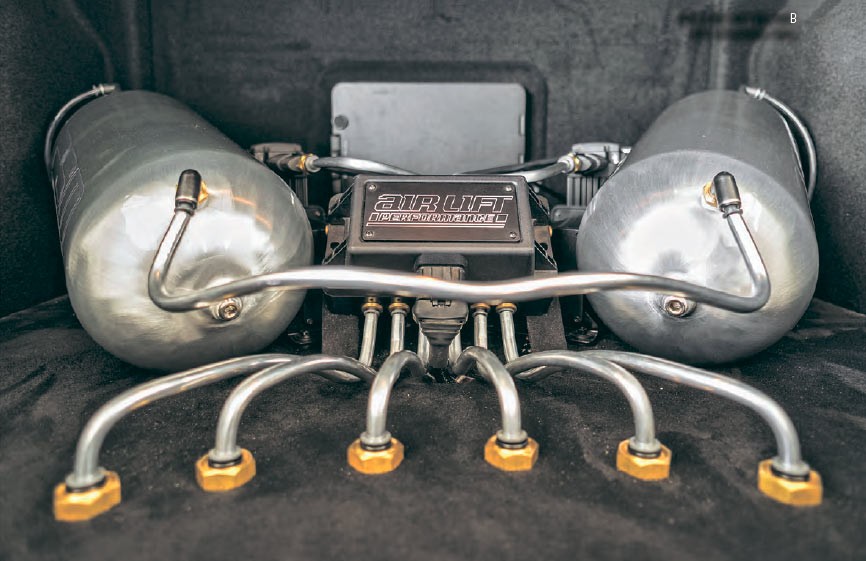 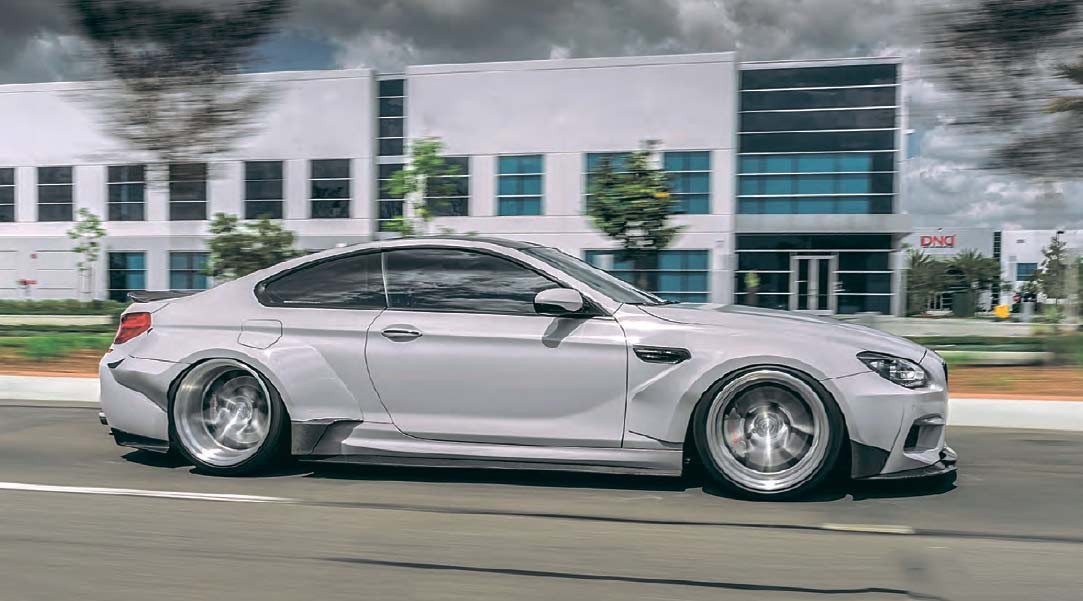 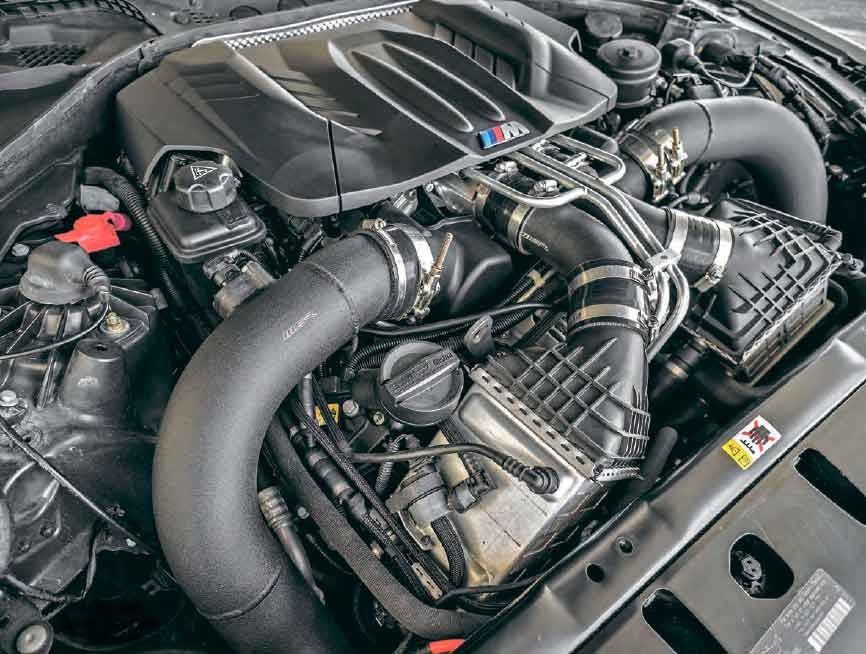 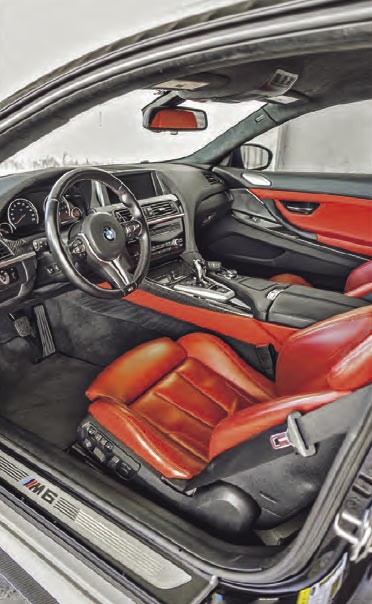 Daniel ML
There are no comments posted here yet