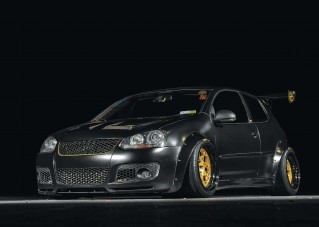 Cars built purely to satisfy the owner rather than to follow trends or conforming with the 'in crowd' are often easy to spot. Don Santora’s unique Mk5 Golf is one of those very vehicles and we just can’t get enough of it. Here's why… Words: Tony Saggu. Photos: Viktor Benyi.

Big turbo, wide-arched Mk5 leaves convention at the door and rewrites the rule book while it's at it!

It really is one of the most difficult things to do… putting rims, springs and a few shiny things on your daily chariot and calling it unique just doesn’t work anymore. You tried your best, Lord knows you did… and so does your bank statement, but this whole projecting self expression and enthusing character into inanimate objects lark is hard. There are so many moving pieces on the board; skill, talent imagination, practicality, reliability, fiscal responsibility… it’s impossible to wrangle them all at the same time while blending the best bits to get that perfect mix, it just is. But to paraphrase that famous Irish American fellow back in the 60’s, “we chose to do these things not because they are easy, but because they are hard…” Those clever sorts who get it right love the challenge, for them it’s all about the taxing effort and wearying work of weighing up the options, lining up the pieces in just the right order and magically making something truly different that actually speaks to us. 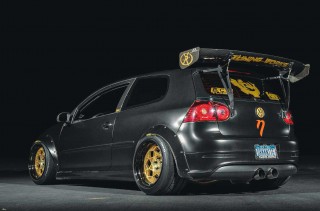 “Honestly, I built it just the way I wanted to,” explained New York based Dub devotee Donald Santora, “it’s not really modeled on anything else or built to a particular style.” As owner and chief spanner spinner at Tuning Works Automotive Performance, Don’s got the tools and talent to bolt together whatever his imagination can dream up. He admits he’s not much for following trends and fashions and one look at his, far from cookie cutter, Mk5 should convince anyone he’s no Scene queen. Don’s path to the wonders of VW was hardly a direct route; “It all started with messing around with a 1984 Pontiac Firebird that my dad had passed down to me,” he recalled. “I had done a few mods to it and always liked the idea of making something mine, personal and custom that no one else had. Around the same time I also started working on my friends' cars here and there; modifying stuff and installing different upgrades they bought.” One of Don’s mates in high school bought a Mk4 GTI and our man admits his head was turned. “It was pretty awesome and I thought to myself I need to have one. By the time I had saved enough money to buy my own car, the Mk5 came out and I’ve stuck with it ever since. When I bought my first VW it opened up a whole new world to modding cars and to the culture that it brought with it.”

A shiny new dealer fresh 2008 GTI fit the bill a treat, but as Don tells it his car shopping capers nearly went horribly wrong. “Yeah, about that,” he laughed; “The Mk5 was my first choice of car when going car shopping. My dad, being old school gave me the typical “Those German cars are so expensive to fix if they break!” talk. We went out to look at other options, which I was not a fan of, and somehow ended up at the Toyota dealership. I’m not even sure how it happen but I almost ended up buying a Scion TC! Thank God I didn’t.” After the baby Toyota deal fell through it was right back to the VW dealership to put a deposit down on a new GTI… a lucky escape!

Chances of leaving the car stock were always going to be slim, the first couple of years of ownership saw Don peppering the GTI with a host of almost mandatory makeover bits; exhaust, intake, coilovers, wheels, front mount … all the usual suspects. “Around 2011 I started getting a little more serious about modifying it and went to air suspension,” explained Don. 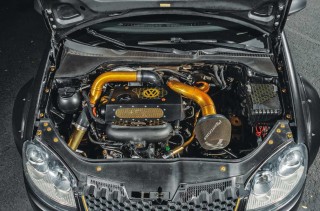 “Originally it was BagYard bombers and Accuair Switch Speed, but I’ve since redone it all and upgraded to Air Lift Performance front and rear struts with 3P management and twin black stealth Viair 444c compressors.” Spirited driving was always on the cards from the outset, so the spongy stock bushings were replaced with track inspired firmer Powerflex polyurethane donuts, while Bilstein rear shocks and thicker H&R and Whiteline roll bars help to keep the car planted in the twisties. Bolting a set of wheels to the hubs with their massively upgraded anchors has not been an easy choice, the hoops needed to be big brake friendly to accommodate the burly Porsche Cayenne stoppers Don’s strapped onto each corner. “I’ve gone through a few sets of wheels over the years but I think I’ve finally settled on a set I’ll stick with,” Don assured us.

Porsche Monoblock Twists were the first to replace the stock GTI rims, which themselves had been powdercoated when the project was new. “I liked the look of them and managed to go one step further a few months later by replacing them with a set of three-piece Twists,” Don told us. “I had to completely refurbish them but they really looked the part.” A set of 3SDM 0.05 wheels came and went before things changed in a big way… a really big way! “They are thirteen inch wide in the rear, and that’s with a minus nine offset,” Don assured us, “the fronts are only eleven and half inch wide though,” he laughed. Compton rim crafters Rotiform cooked up some huge hoops in the shape of a quartet of 18" DSC splits that are anything but subtle. Wrapped in a half acre of rubber the rotund rims would call for some serious surgery on the Mk5 bodywork in order to house them. 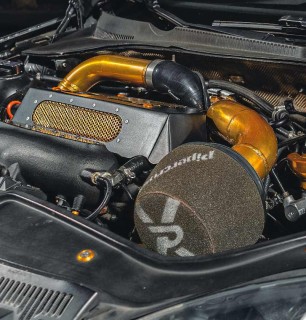 While most Dub modders would have their smiles turned upside down if their rides were referred to as a little 'Fast and Furious', senor Santora takes it as a complement, “You could say that the original Fast and Furious movie was an influence, it gave me some motivation to go faster and look good doing it,” he smiled.

Nowhere is the silver screen SoCal street racing style mimicked more than in the exterior treatment on Don’s Dub. Starting at the front… oh who are we kidding, the biggest talking point of Don’s GTI is at the opposite end, “It’s one of my favourite parts of the car and it’s the bit that gets the most hate,” he laughed. The inspiration for the huge GT style wing bolted to the back apparently came from somewhere half way between the VW Racing team and Hollywood’s high horsepower high jinks. “It was one of those late night thoughts that I made work and it came out badass!” insisted Don. “Now everyone wants to know how I did it and where I got it from.” To let the pussy out of the purse the rear-end real estate was actually stolen from a Subaru STI, Don’s cousin just happened to be parting one out and had the wing for sale. The two slid the spoiler up to the GTI and used their imaginations.

Attaching it to the car proved to be a challenge, shockingly there was no one who seemed to make off the self hardware to attach that degree of downforce to a Dub. “It took a while but I found a company called BMSPEC who listed wing mounts for a Mk5, after some modifying and fab work it worked perfectly.” Barely covering the oversized Rotiforms are two pairs of carbon fibre fender flares, exposed rivets and no finish blending to the bodywork adds to the street fighter persona, as does the Seibon carbon bonnet. “The original factory colour is Black Magic Pearl,” Don told us, “It's currently wrapped in Avery Satin black and I have plans to have the car painted the same Satin black once I have a few weeks that I won’t need the car." Without a doubt there is more added than taken away on the exterior and subtly takes a backseat… by the way there is actually no back seat. The front seats are Cobra Misano Anniversary buckets with Cobra harnesses. The black and gold vibe is carried on into the interior. The cabin boasts lots of everything; switches, dials, custom stitchwork, ICE… its tuner car heaven. Don promises that by the time you read this he will be sitting on the passenger side... with the steering wheel in his mitts, the Americans do love their right hand drive conversions and our man is not one to be left out. 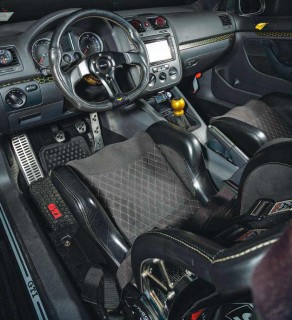 The GTI powerplant is still the original two litre lump shown in the sales catalog, however due to an errant time chain tensioner a new unit had to be sourced. “The motor started with a full IE Sport long block to support a custom top mounted GTX3071r big turbo,” explained Don, “as far as I know it’s the first top mounted turbo on a TFSI motor.” With a strong supporting cast of go faster bits added in and around the engine promised horsepower numbers are around twice those of a stock unit. “The gearbox is built with a Peloquin LSD with steel shift forks in a Beetle Turbo six-speed transmission with a South Bend Stage 4 street endurance clutch kit,” revealed Don. Swoops add the fine detailing to ensure the two litre looks as good as it performs. “I’ve got plans to clean up the bay a lot more, relocate the fusebox, delete the coolant ball, tuck the harness and fabricate cleaner pipework.”

There’s no risk of Don’s creation blending into the background, it’s different and it demands attention. It sets itself apart in a sea of cookie cutter vinyl wrapped water cooled wagons all running Air Lift and Rotiforms…wait…what? You see what he did there?

SHOUT: My wife Abby and my son Andrew, my dad, Tuning Works (Rich, Hans, John), Swoops Built, all my friends, anyone I’ve had the opportunity meeting/talking to or has come up to me at a show or a meet to compliment the car 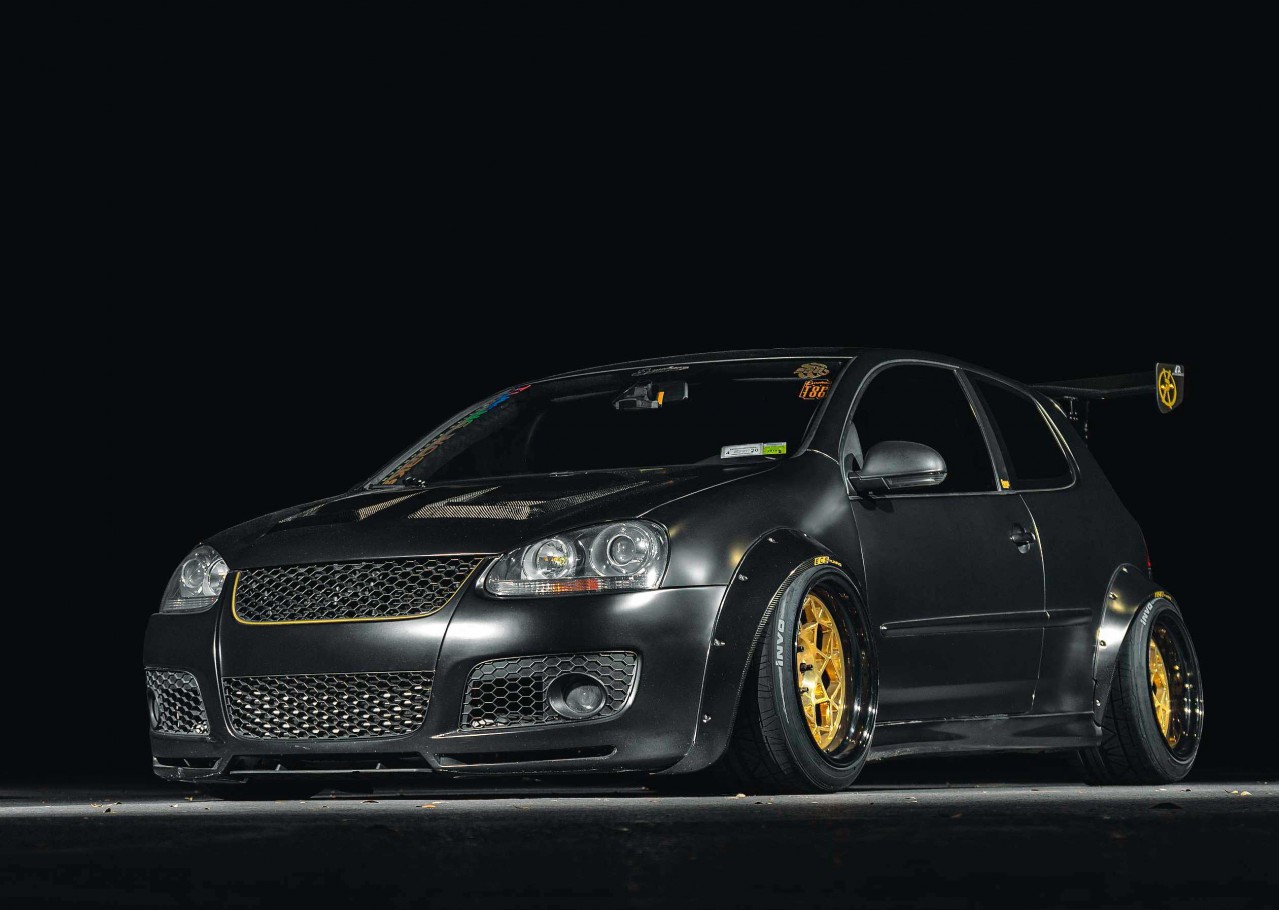 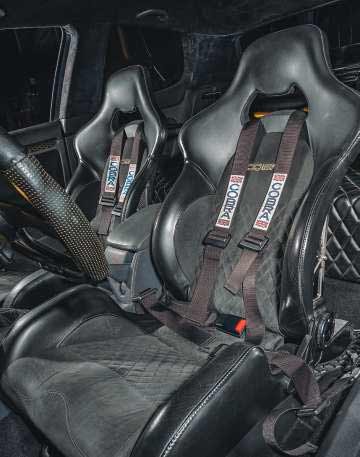 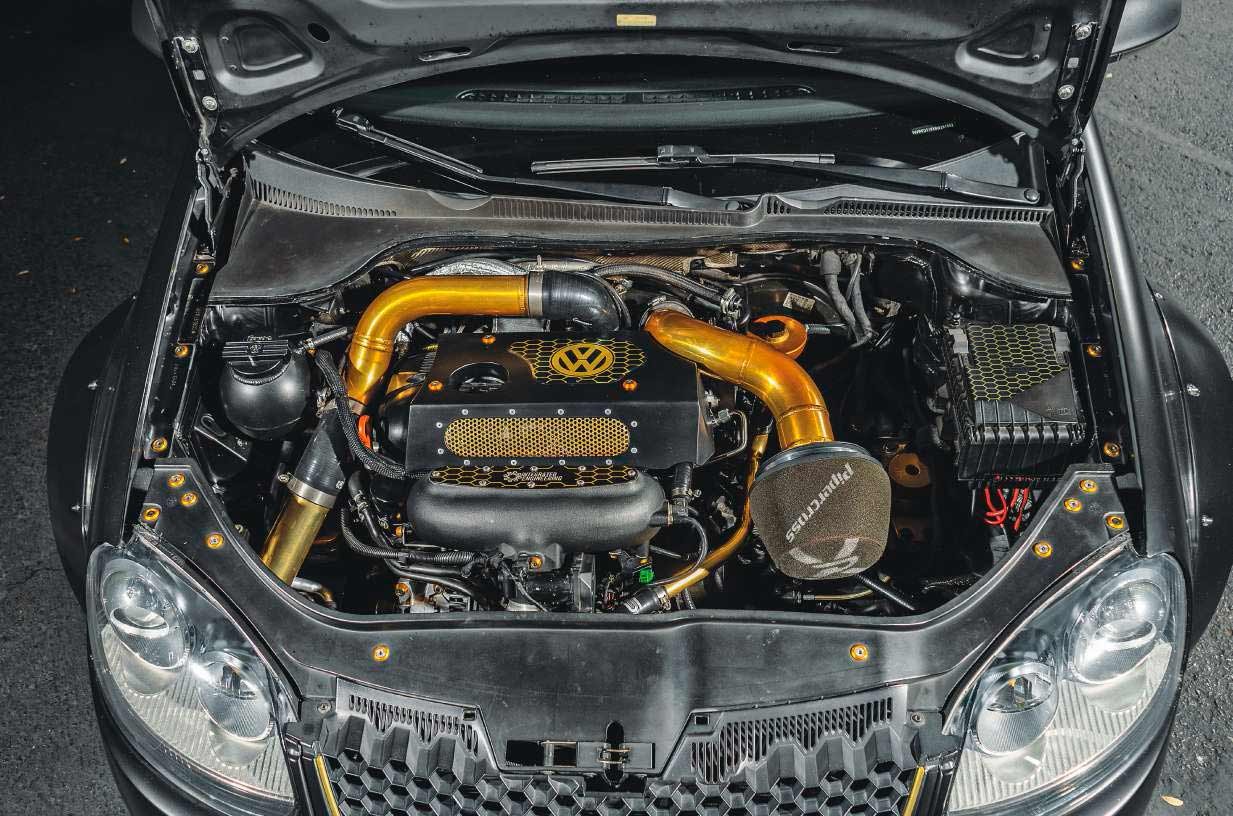 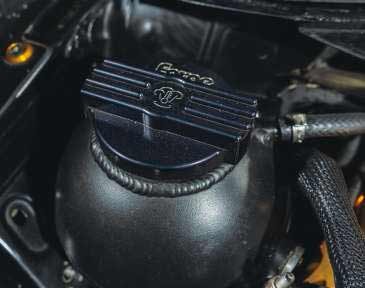 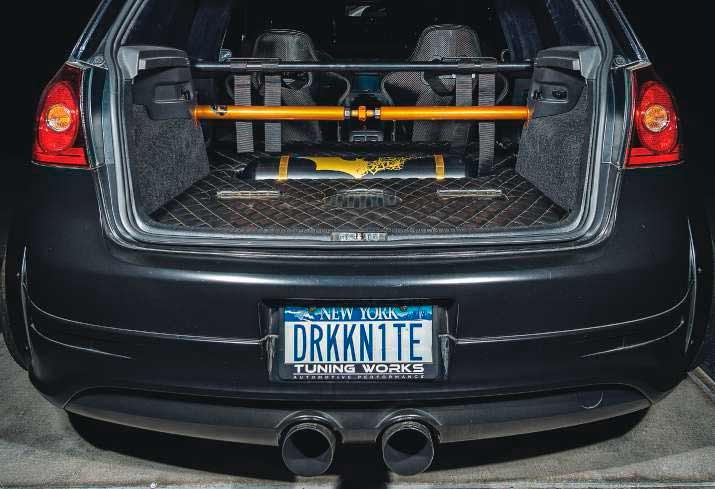 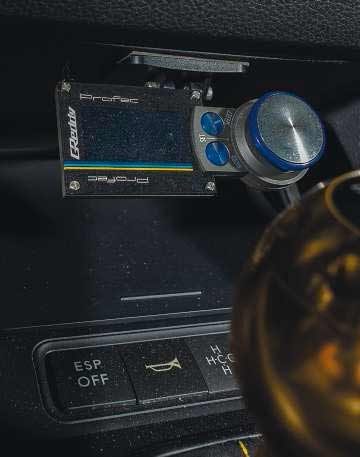 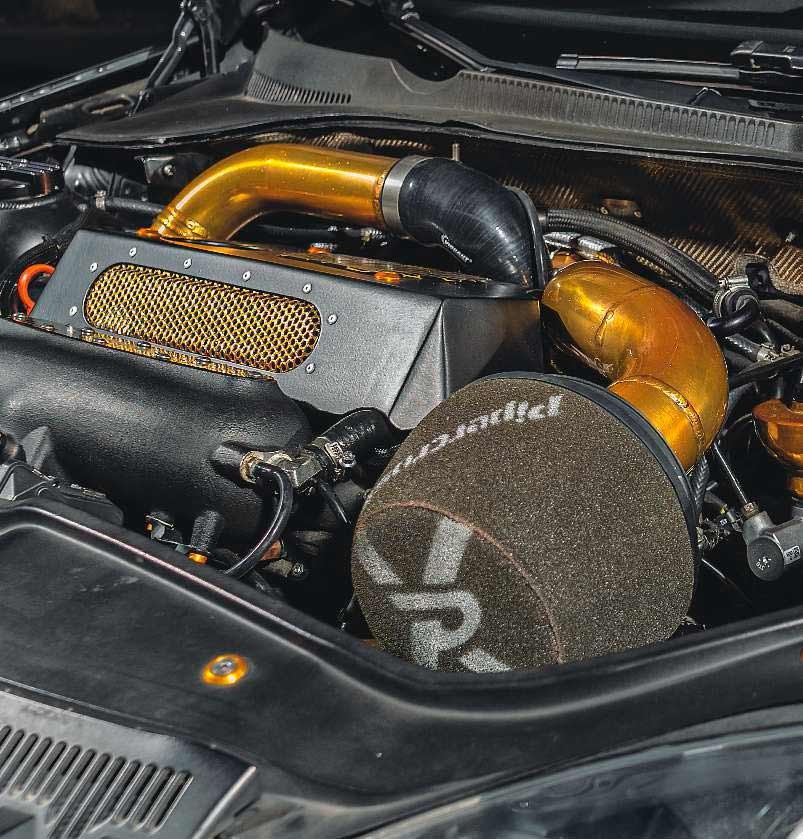 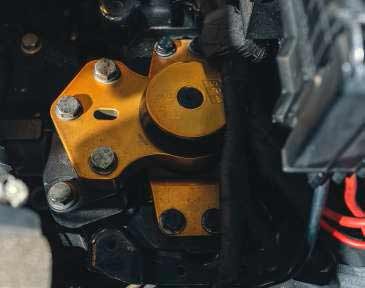 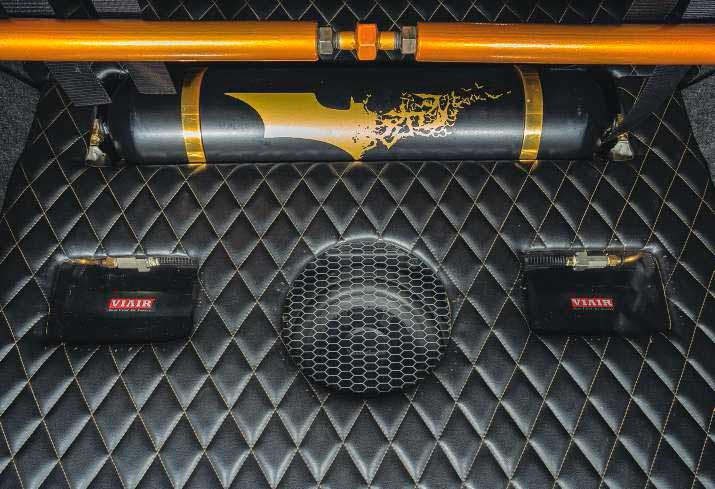 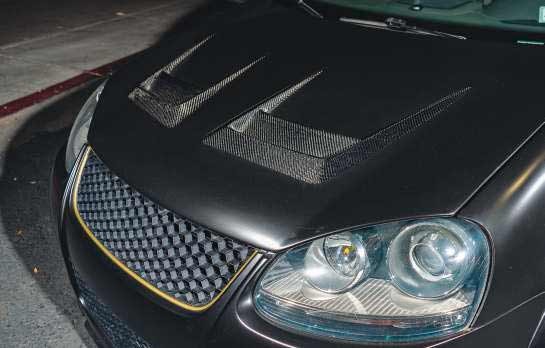 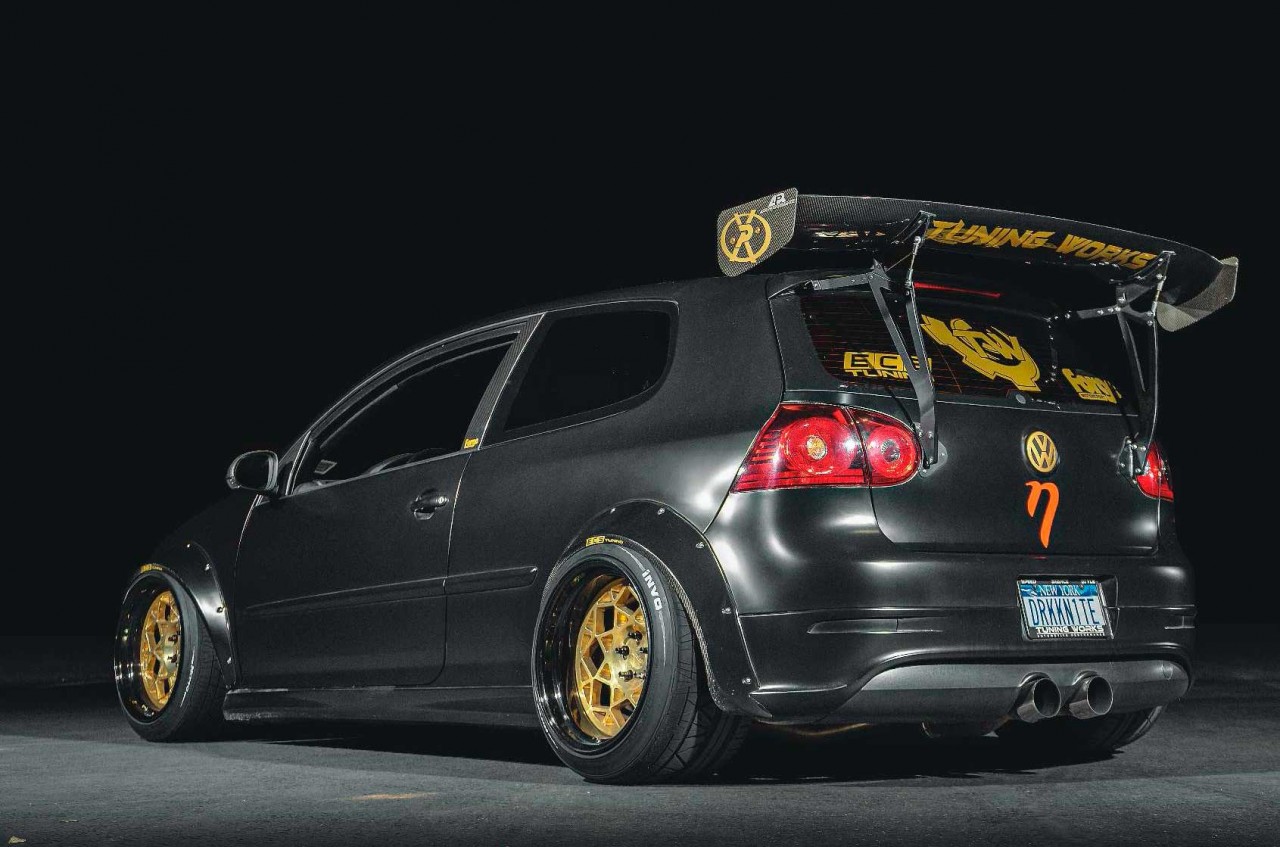 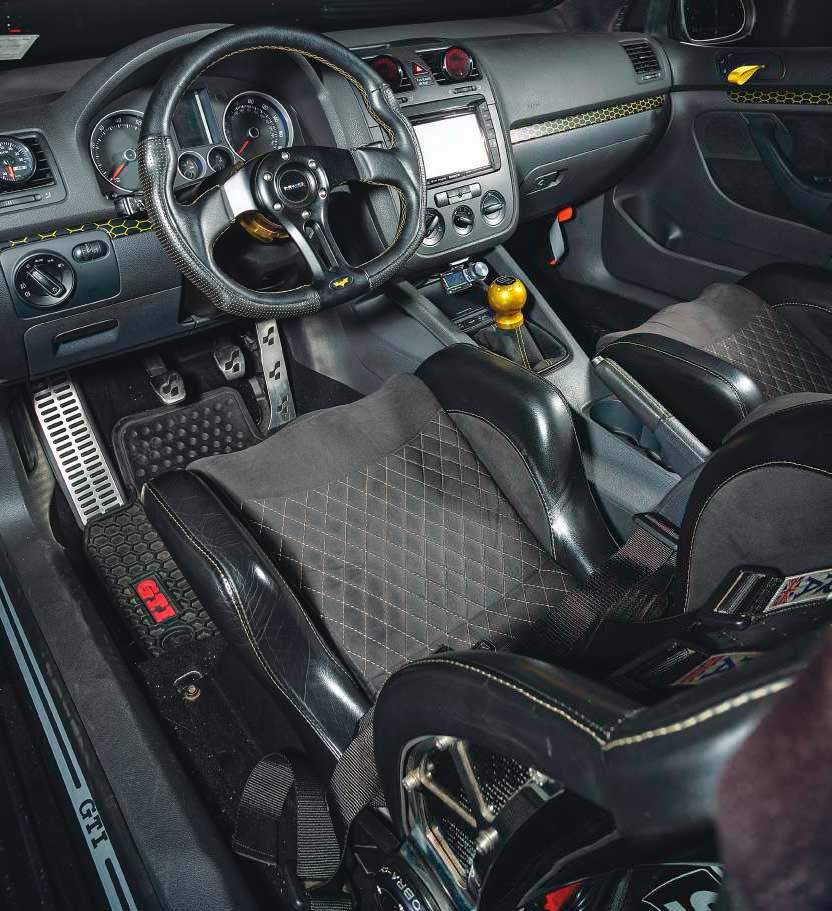 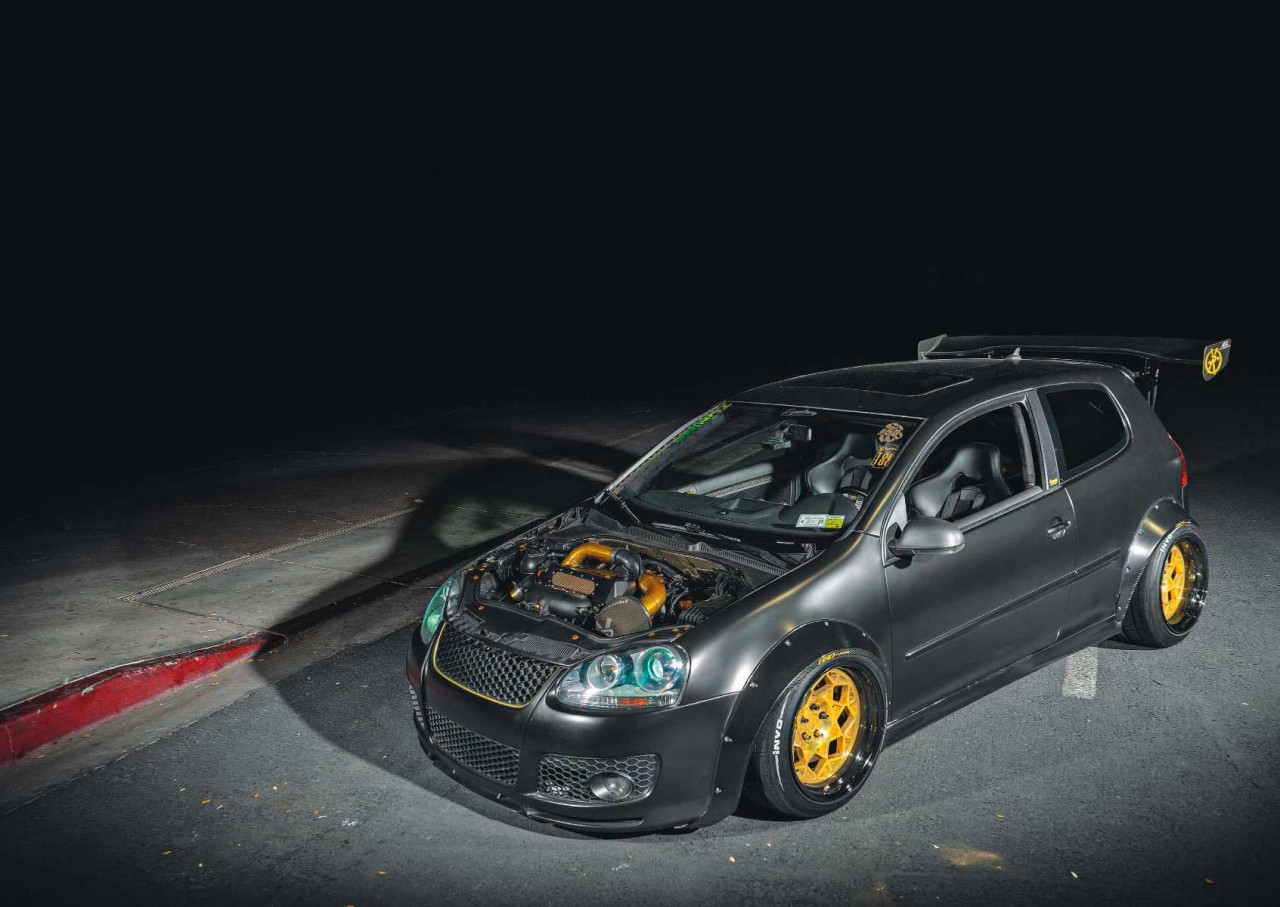 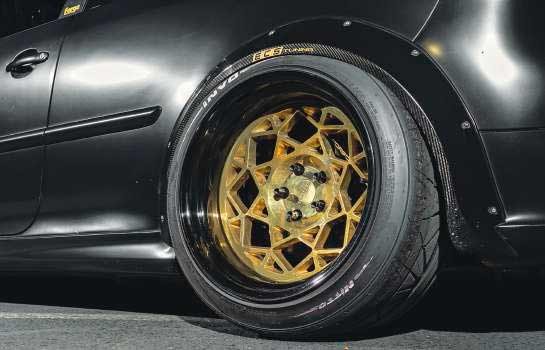 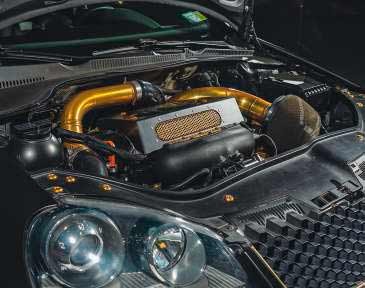