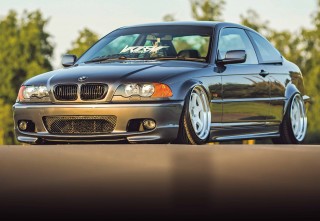 It’s impossible not to love the 3 Series. BMW’s mid-sized exec saloon has been wowing punters since it was launched way back in the ’70s in E21 form and, when the undisputed icon of the ’80s, the E30, arrived it had firmly cemented its place in the market as the go-to choice for anyone looking for the perfect blend of style, performance and driver involvement. Whichever way you look at it, the 3 Series is just a great car and the E46 in particular is hard to beat. It’s still a great-looking car, is outrageously affordable, just so good to drive, ticks just about every box imaginable and gives you everything you could possibly want from a car plus a little bit more. Just look at Josh Lamb’s example: this is a damn good-looking car and Josh has done an awesome job on it and, if you didn’t know better, you’d struggle to believe that it was coming up to being 16 years old. You can’t deny that a perfectly-executed E46, especially in coupé form, is still a seriously nice thing to look at.

‘But,’ we can almost hear you say, ‘An air-ride E46? We’ve seen this so many times before…’ and you’d be right, we’ve featured more bagged E46s than we’d care to mention. Which must mean that, in order for another air-ride E46 to get our attention, there has to be something a little bit special about it, something that really makes it stand out and sets it apart from the crowd, and that’s exactly the case here. You see, Josh is addicted to fitment, devoted to stance and with this build he was willing to go further than most to express that passion. The result is a car that doesn’t give away its secrets readily, a car that you have to have a keen understanding of the E46 to be able to truly appreciate and, when you do, you’ve got nothing but respect for both the owner’s dedication and what he’s achieved. So, a little background about Josh himself first; “BMWs were always a car I wanted to own; being young and my old man having an old 5 Series really made me want one when I was older,” he explains and he made that happen when he bought this E46 330Ci Sport, his very first BMW. “I was looking for an E46 M3 but the insurance was too much for what I was looking to spend, so the second-best option for me was the 330i, as insurance wasn’t too bad. I always wanted a straight-six, it’s got a lovely sound. I previously built a Mk5 Golf four-door with air suspension, Work split wheels and it was a lovely car but I just didn’t enjoy having a diesel,” he says so you can bet he’s seriously enjoying driving his E46, but finding his perfect car took some searching. “I was looking for months for the right one with leather, a manual gearbox and low miles,” says Josh. “I found one eventually not far from me; it was family-owned from new and had been passed around the same family so I am the third registered owner. The interior was lovely, really clean leather, no rips or tears, but exterior-wise it was looking a little sorry for itself, with a cracked side skirt, scratched bumpers and some minor car park dents,” he says, not that you’d ever know to look at it now, mind.

So he had his perfect E46 330Ci but did Josh have a plan for it? You bet he did although, as with most of our feature cars, he didn’t intend for things to work out quite the way they did, but that’s certainly no hardship. “Before purchasing the car I knew exactly what I wanted, so a couple of months before I’d even bought it I got my air suspension kit, which I bought second-hand from a private seller at the Edition 38 show. I wanted to make it a show car and eventually stick my dream wheels on it,” he says and he’s done all this and rather more, too. With mods planned and air suspension in hand, Josh wasted no time in getting stuck into the build once he’d bought his E46 and the whole process took seven months, exactly the same amount of time that he’s owned the car so there was no messing about here.

Step one was fitting that air suspension and Josh’s kit comprises Air Lift Performance struts, with AccuAir e-Level management, and while all that was nice and simple, things started to get complicated once Josh threw his dream wheels into the mix. The wheels in question are the rather sexy set of Work Meister S1s you see before you and these three-piece 18” splits cost a pretty penny, so when Josh happened upon a used set at a killer price he just couldn’t say no, even if the fitment wasn’t quite right for his E46… You see, while these beauties measure a meaty 9”-wide up front and a hefty 10” at the rear it wasn’t the widths that were going to cause Josh a headache, it was the offsets. Those fronts are an ET5 and the rears are ET1, ultra-aggressive fitments that were never going to work on the E46 unless Josh took matters into his own hands, which he did.

“I never intended on making the arches wider but when I got the wheels for such a good price I just couldn’t justify running -14° camber to get them to fit. So it had to be done,” he grins. “I had the rear arches widened by 2.5” on each side, making it wider than an M3 at the back, and while this was being done I had the whole car sprayed by Dom’s Street Shop – it’s a family-run business and he has his daughter, son-in-law and wife all lending a helping hand and he does amazing work,” enthuses Josh. And there’s the secret of this build, a secret that was hiding in plain sight and staring you right in the face, and that’s the metal wide-arch conversion that’s been carried out. An additional 2.5” per-side is not an insignificant amount of width to be adding to a car and we love the fact that rather than getting his wheels rebuilt, Josh stuck to his guns and was determined to run that crazy-aggressive fitment. His dedication has absolutely paid off because, firstly, not many people are committed enough to go for a metal widebody as it’s a lot of work and, secondly, the end result is seriously impressive. This E46 just looks so fat, so wide and imposing and it’s really hard to put your finger on just why that is without knowing its secret.

Of course, plenty of credit must go to the Works for looking so damn good; the combo of white centres, black hardware and polished lips is a fantastic one and the fitment is so perfect, with the front arches just kissing the lips while the rears touch down between lip and tyre when Josh airs out, for maximum visual drama. That’s not the end of it though as even widening the arches wasn’t going to be enough to get everything to work properly; sure, the wheels would fit but the car wasn’t going to be able to drive properly so a set of modified toe brackets have been fitted at the rear to allow Josh to run some camber without excessive toe-in.

There’s also a lot more to the styling than just those arches and a respray and Josh has paid plenty of attention to the details. He’s had the front bumper smoothed, rolled the front arches, fitted gloss black kidney grilles, a gloss black lower grille, gloss black fog light surrounds and rear valance and the rear bumper has been modified and plastic welded to marry up to the rear arches. He’s also added all-red rear lights and US-spec amber indicators all-round and all these elements combine perfectly and just give this E46 that visual edge to keep it looking fresh. The 3.0-litre M54 that sits under the bonnet is a strong performer out of the box and notoriously tricky to extract additional horsepower from without spending big bucks so Josh has instead concentrated on upping overall driving enjoyment. He’s got a custom ECU, with a performance map and raised rev limiter along with a pop and crackle map, and he’s also had an idle control valve-delete carried out, and he says once this was blocked off it gave the car much better throttle response and was well worth doing. The final piece of the puzzle was an exhaust to be able to enjoy a bit more of that straight-six soundtrack, and so he’s now running a 2.5” straight-through system with one small box and a pair of Powerflow twin tips which, says Josh, sounds incredible and we don’t doubt it. Finally we come to the interior and while Josh hasn’t done too much to the cabin, adding a carbon steering wheel badge, polished gear knob, Alpine ILX700 double-DIN head unit and Alcantara parcel shelf to replaced the faded original item, it’s the boot where things really impress. “I had a professional boot install done by Oxford Car Audio with updated Alpine speakers and tweeters, two Alpine amps and twin 10” JL subs in the boot. Custom brackets were made for the management and compressors to hang from,” he says and this is a seriously impressive install.

The twin 444c compressors, sitting in mid-air on their custom brackets, look fantastic and are joined by a single tank and hardlines, while the custom-trimmed enclosure for the floor-mounted amps is the finishing touch. It all adds up to make one seriously-sexy boot build that is the perfect show companion to the widearches and those spectacular Works.

In seven short months, Josh has taken his E46 from stock to show car and his dedication to this build and determination to get those wheels to fit is majorly impressive, and the end result is the perfect E46 he wanted to build. With all the mods he wanted executed perfectly and no further plans (for now…) we get the rare pleasure of saying that this build is finished and not only that but Josh has cut no corners and made no compromises. Considering he’s just 22 and has already built such a smart machine, we can’t wait to see what his next stop on his modding journey will be but, for the time being, for Josh it’s all about enjoying this E46, happy in the knowledge that he’s done exactly what he set out to do and the end result is very good indeed.

THANKS Dom’s Street Shop and all his family for their hard work and determination to get the car finished for the magazine, Oxford Car Audio – Lem, Mark and their team for my air suspension, audio and custom installs throughout the years and especially on the BMW, and my dad for always driving me to achieve what I thought I couldn’t, especially for myself being so young

“ Before purchasing the car I knew exactly what I wanted, so a couple of months before I’d even bought it I got my air suspension kit” 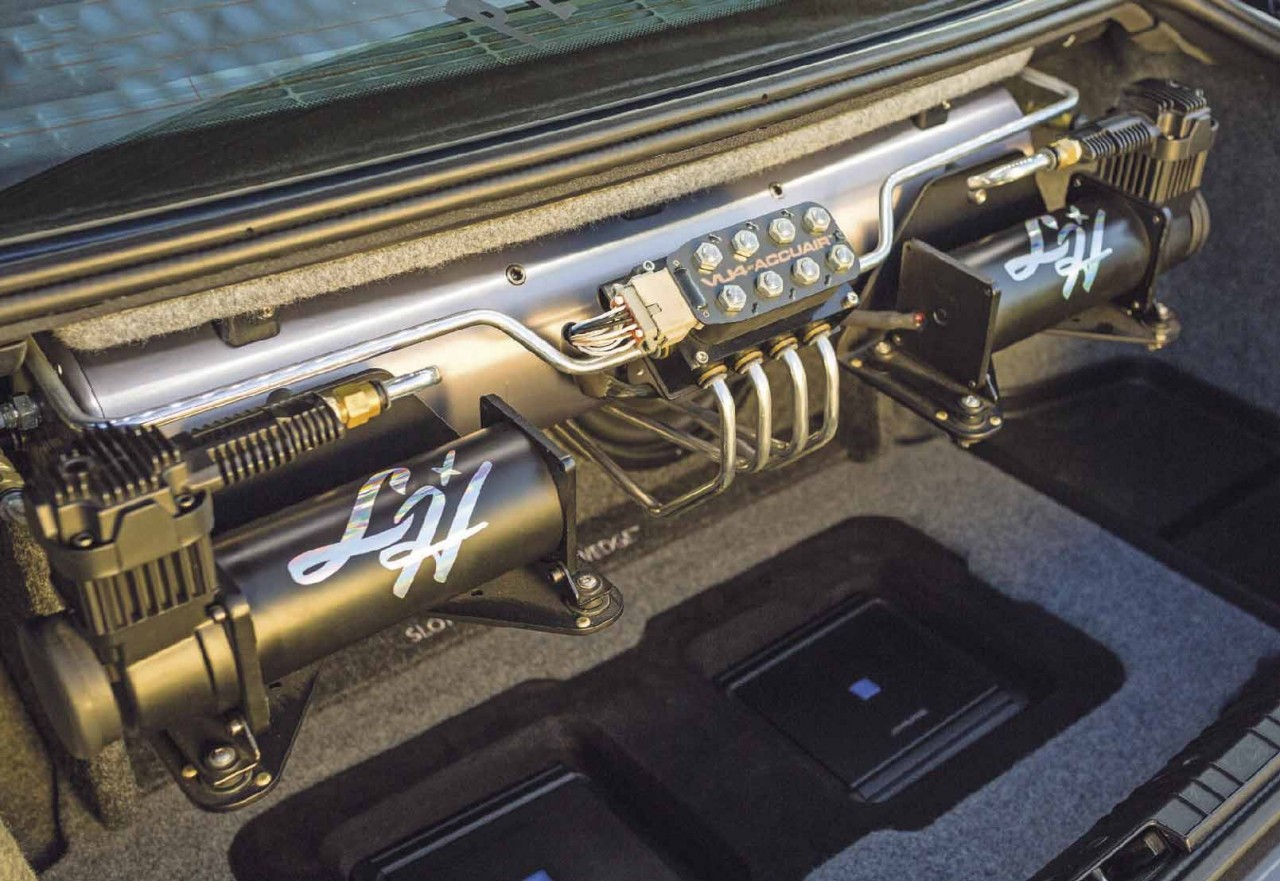 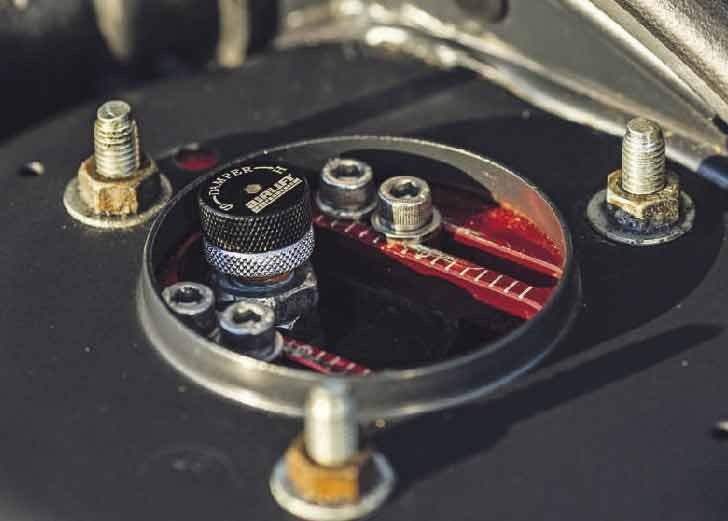 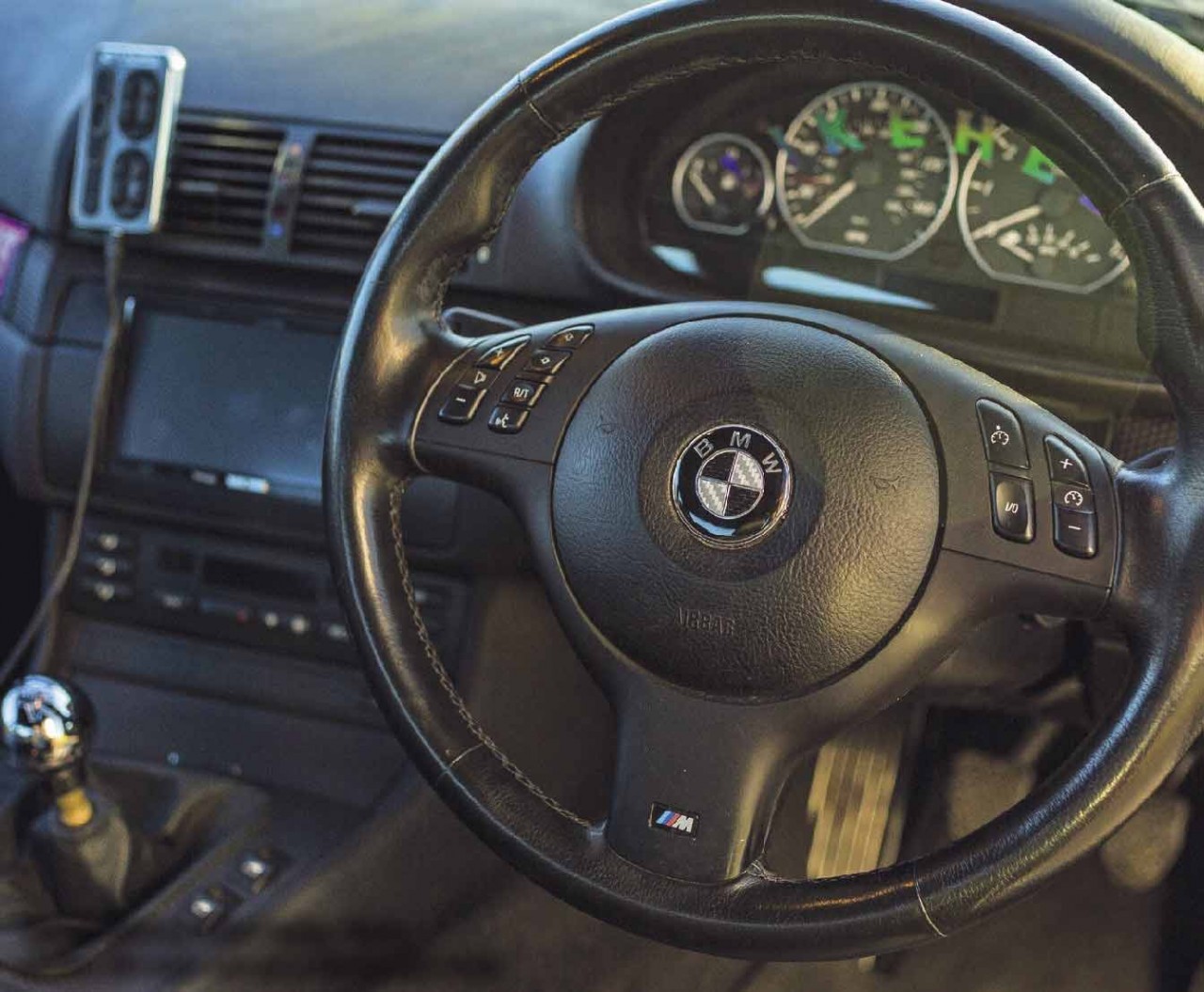 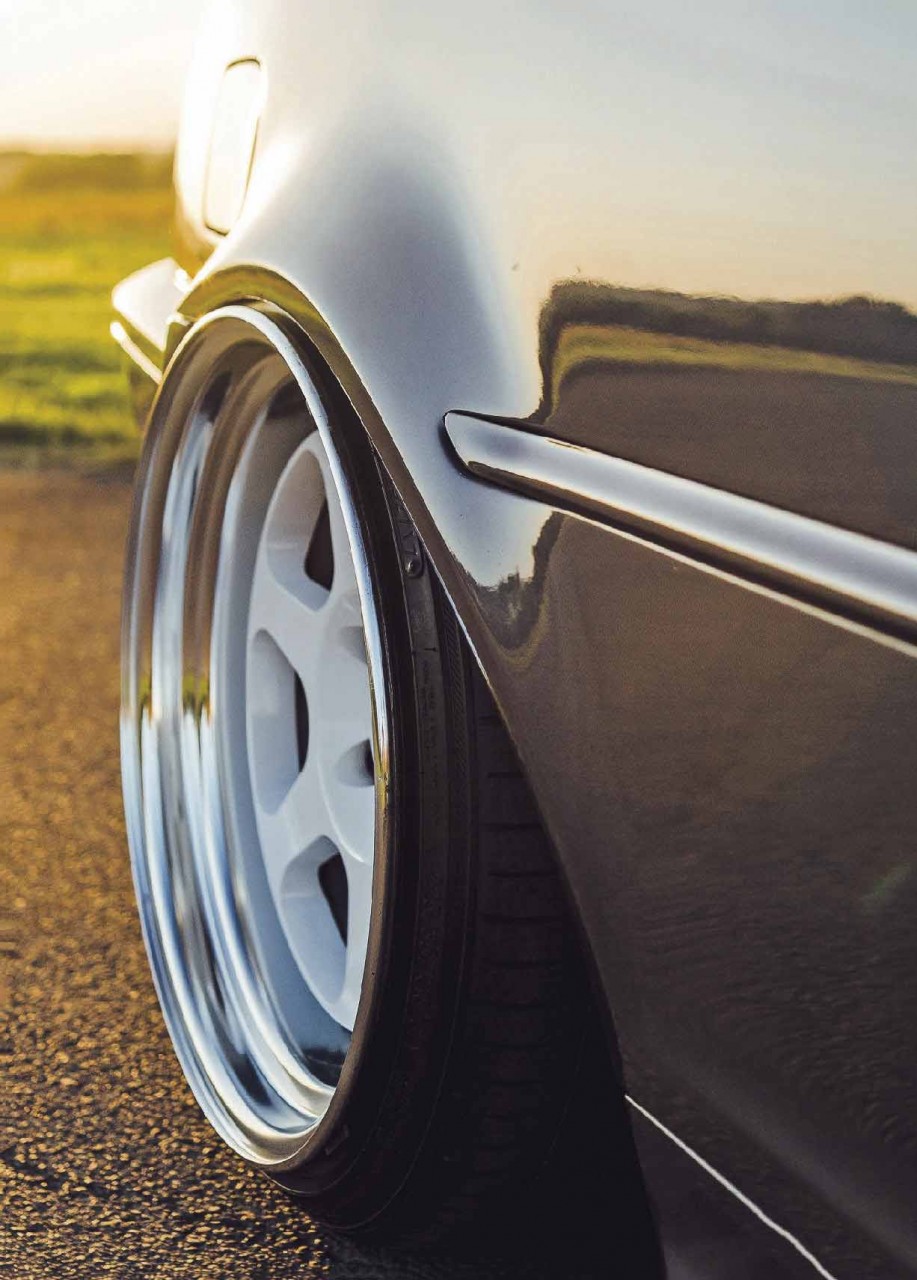 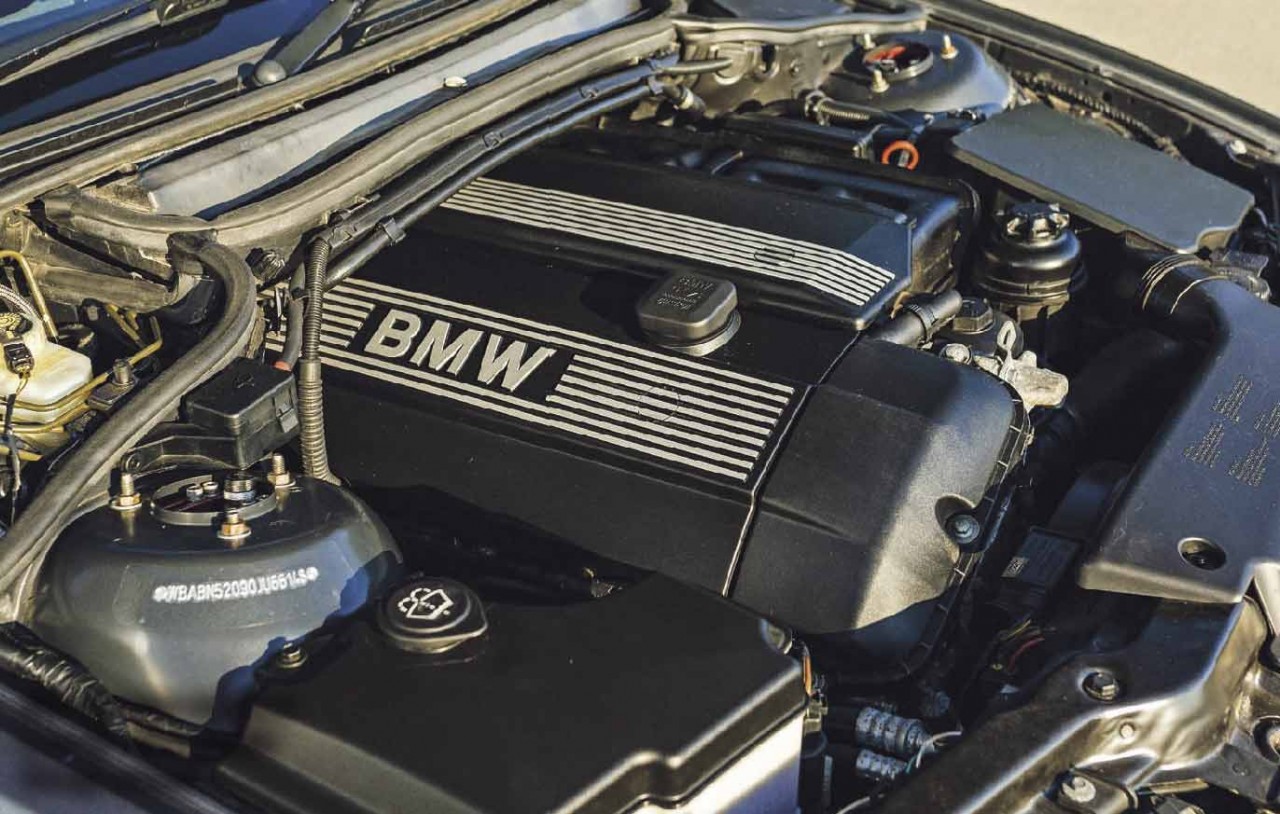 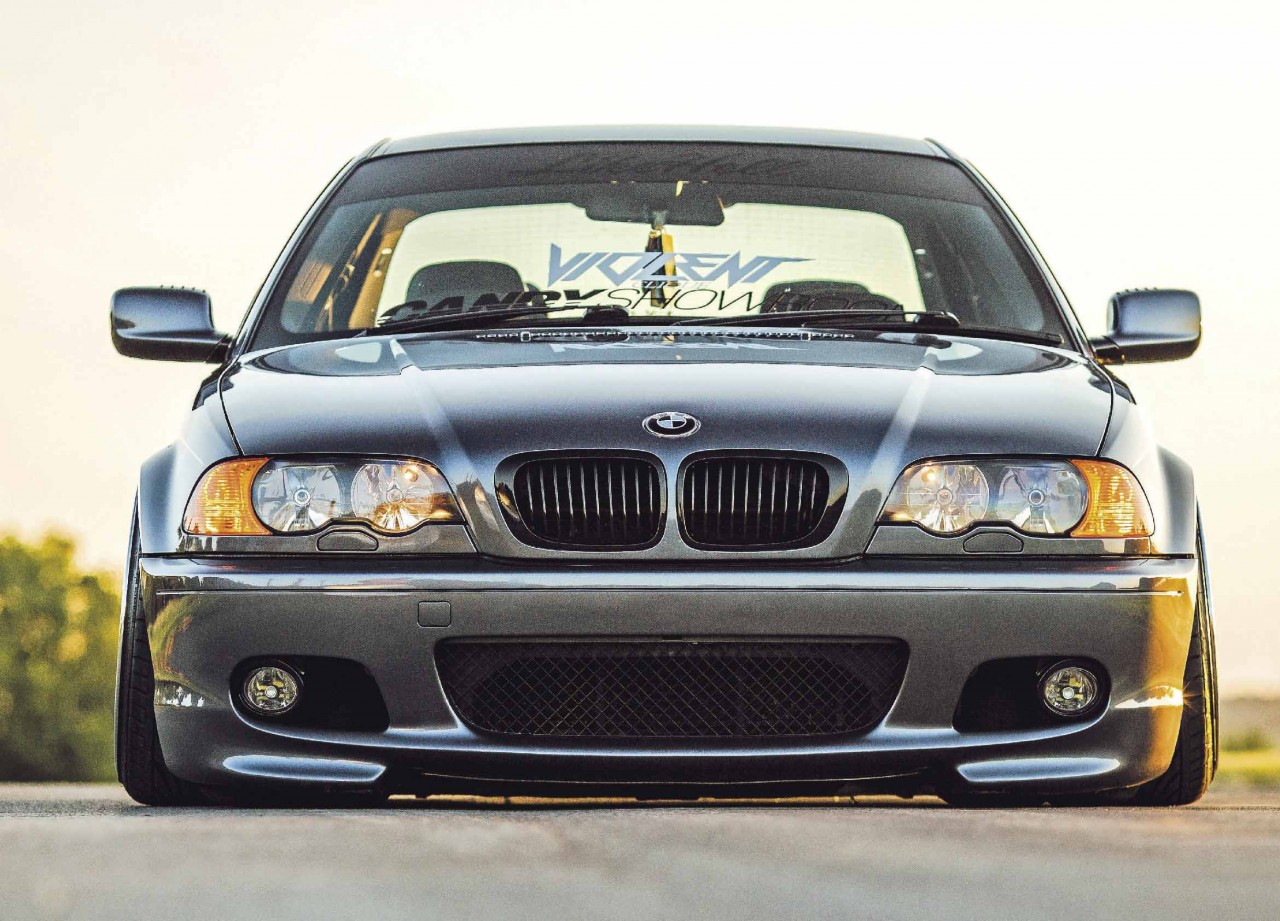 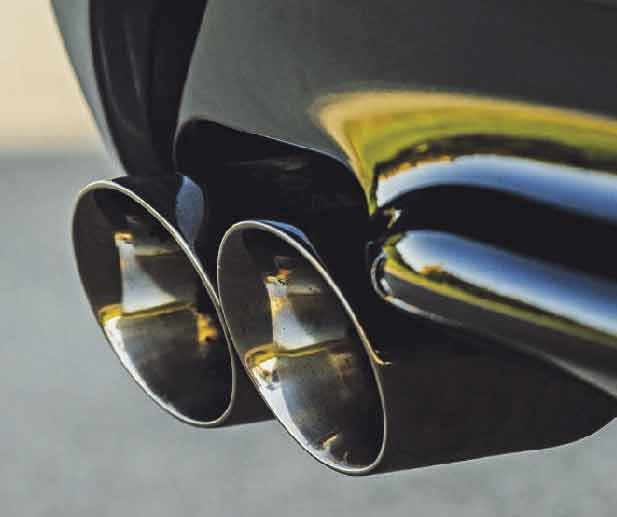 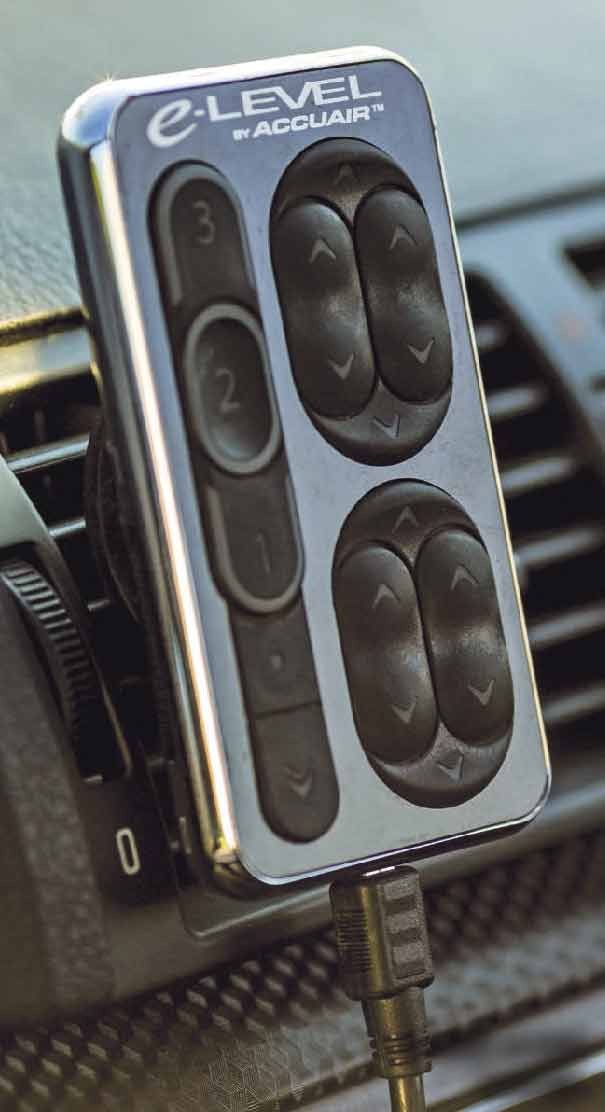