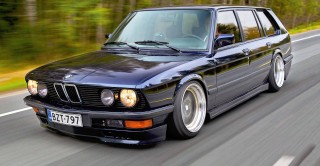 Ultra-rare E28 Touring. Super-cool retro wagon. Mythic rare. Gorgeous E28 535i Touring. You might have never seen an E28 Touring before, you might never see one ever again, but they do exist and their rarity makes a modded one all the more special. Words: Elizabeth de Latour. Photos: Jape Tiitinen.

PBMW features are always about the we, not the I; we’re the voice of the mag when we’re speaking to you from these pages, it’s not about who’s doing the writing but what’s being written about and what’s being said. But I will break with tradition, briefly, because I have a personal connection with E28s.

Quite a few years ago I bought one, a 518i Lux that was more rust than car, as a “sensible” daily (the not-sensible car was an 840Ci) for £400. I adored it, even though it was slow, smelled of mould and had a leaky boot (but then again they all do). I sold it a year later for what I bought it for but sadly the extensive rust was terminal and it didn’t last much longer after that. Sad times, but I don’t think I will ever own one again, not because I don’t want to, but because seven years on the E28 is no longer a cheap runabout, with prices climbing steadily, and far harder to come by nowadays. When’s the last time you saw one that wasn’t at a show, for example? They’re rare beasts, that’s for sure, and the rarest E28 of all is undoubtedly the Touring. This model was not an official BMW creation, with just a handful ever produced by a handful of German companies. Schulz Tuning is generally regarded as having produced the best conversion, which used a Mercedes tailgate, and was responsible for the majority of Tourings in existence, having produced 32. Even when combined with the unknown but exceedingly small numbers of the other builds that’s really not very many cars at all. All of which makes the chances of finding one extremely slim and yet here we are, staring at not just an E28 Touring but a modified one at that, making an already incredibly rare car into a true one-off. 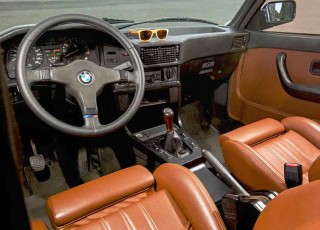 When the E28 Touring was created, we doubt that Schulz and friends had aimed the car at 23-year-old engineering students but some 30 years later and that’s exactly who’s driving this one, namely Finn, Alex Sirén. This young man may have only been interested in BMWs for four years but he’s already got his hands on two and he’s clearly hooked on classics as this E28 sits alongside his other E28, a 525e, another rare model, while his first BMW was an E28 535i. He’s clearly passionate and he’s clearly found his groove when it comes to BMWs, and what a mighty fine groove that is.

The Touring, then, wasn’t a car that Alex had been shopping for but when opportunity comes knocking you’d better be ready, and this was not something to pass up. “The opportunity presented itself to get a really rare model so I had to get it,” he explains. “I bought the car from an older collector who wanted to part with his E28-related things. The restoration had begun, the car was painted and rolling, but it needed a lot of small parts and an interior.” Just in case there might be any purists reading this, who might have baulked at the thought of someone modding such a rare gem, the fact that Alex was starting out with a restoration in progress gave him the perfect opportunity to put his own stamp on it while finishing it up.

The plan, he says, was to keep it looking OEM but to put some suspension and wheels on it and he’s largely stuck to his own brief, with stunning results. He may not have done much to the car as far as absolute mods are concerned, but starting with pretty much a blank canvas means he has absolutely made this car his own. 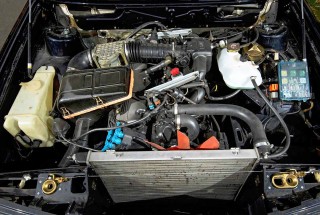 Besides, much like an E30 or an E24, the E28 is not a car you want to embellish with all manner of unsightly addenda, it’s a car that just looks so right out of the box that it would be so very easy to ruin what is pretty much a perfect design. It’s just about subtly enhancing those good looks and adding a dash of your own individual flair to proceedings. And, remember too, that Alex has put a lot of work into this car, far more than meets the eye, because it was in a very different state when he bought it to how it looks now. This is a car that has been lavished with love, but which doesn’t shout about it.

So, first things first, top of Alex’s list was an interior because, you know, there wasn’t one, making this E28 no use to man or beast as actual transport. Just getting any old E28 interior wasn’t going to be enough, though, it had to be something special. “I saw a picture on social media of a blue E30 with a brown interior and decided that was the style I wanted,” he says. “I asked around for a good upholsterer and found a small shop, run by a local woman who did all sorts of upholstering and she had done my friend’s 2002 interior before, so I had a good reference.” The end result is absolutely gorgeous, with Alex opting for a caramel shade of leather for his interior and he’s not just had the seats trimmed, the door cards have also been beautifully finished and the quality of the work is exceptional.

This is the sort of interior you’d expect to find on something seriously top-end and expensive and it immediately makes the whole car feel that much more special and the fresh hide completely hides any hints of the car’s age. The lush leather is joined by a brand new M Tech 1 steering wheel, the perfect period piece, and there’s also an un-lacquered wooden gear knob that fits the whole theme of the car perfectly.

With something to sit on, Alex could now turn his attention to how his E28 Touring looked and drove, and the next item on his list was the suspension.

Obviously as standard the E28 has arch gap for days and looks like it could drive across the Alps without catching its undercarriage, so the need for lows was an urgent one. As you can see from the pictures it’s definitely mission accomplished on that front and Alex has really put in the time and effort to get his E28 sitting absolutely perfectly. To hit that ride height sweet spot he’s attacked the Touring with a two-hit combo of serious suspension goodness. BC Racing’s Extra Low coilovers, capable of delivering a monster 90mm drop, are at the heart of it all, bolstered by a set of Bags by Only Charged Dubs. OCD’s bags have been designed specifi cally to be threaded onto BC Racing’s coilovers, making this the perfect pairing for Alex. “I wanted to be able to drive more comfortably and be able to get the fi tment on point,” he explains, and this combo has allowed him to do just that. The ride height he’s got going on is perfect, and the way the car sits stationary is the same as when it’s on the move; there are no compromises here, just one perfectly orchestrated setup. Of course there would be no point going to all that effort to get this car sitting so right if your wheel game was weak and you were planning on rolling down the road on disappointment, but that was never a concern with a man like Alex at the helm of this project. Initially, the Touring sat on OZ Futuras, seriously nice wheels, but they weren’t his perfect set for this build and there was something else he had in mind. “I had set my sights on a set of these wheels a long time ago,” he says, gesturing at what he’s got on the car now, “and at a BMW meet I met an older enthusiast who told me that he had an extra set in his garage.” Much like the purchase of his E28 in the first place, this was an opportunity that could not be turned down and once the money had exchanged hands, Alex was the proud owner of a set of 17” Hartge Design Cs. These period three-piece stunners are the perfect choice for a car like the E28, they just suit it so well and here they’ve been finished with grey centres and gold hardware, which contrasts perfectly against the blue bodywork. But simply slapping on a set of stunning wheels wasn’t enough for Alex because they needed to sit perfectly and getting the right fitment was his absolute priority. Up front, the wheels are 9” across with an offset of ET6 and Alex has added 15mm spacers to get that down to ET-9, while the 10.5” rears have been fitted on 5mm spacers to drop the offset from ET11 to ET6, pushing the wheels further out, and with a bit of stretch on his tyres they clear the arch lips with absolute, millimetric precision. 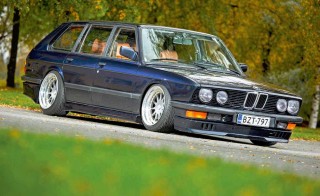 You might think that nothing else would be needed as far as visuals are concerned, but the keen-eyed among you will have noticed that this E28 has received some enhancement in that area, with the addition of a Pfeba kit, the last item on Alex’s E28 mods list. This comprises that slatted front spoiler, those sculpted side skirts and the lower rear bumper section. While it might not be to all tastes it definitely gives the car an even more unique look and manages to subtly enhance the styling. If you didn’t know any better you’d think the car had come from the factory wearing those components in the first place. Finally, under the bonnet, we come to the M30B35 and while Alex hasn’t invested in any performance mods the ‘Big Six’ has been enhanced with the addition of a Hartge exhaust manifold. At the rear, meanwhile, there’s a rectangular AC Schnitzer exhaust in the E28’s infamous off-centre location, which we’re sure was designed purely to drive everyone’s OCD completely nuts.

Alex’s E28 Touring might not have the most extensive mods list in the world but this is a car that’s been enhanced with a selection of choice mods and into which has gone a lot more work than may at first meet the eye, resulting in a machine that is an absolute pleasure to behold. 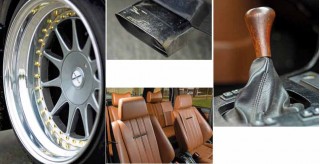 E28s are universally loved, BMW Tourings are some of the downright coolest cars around, so the combination of the two is an irresistible one and a modified example ticks a lot of our boxes. Alex and his Touring are definitely still in the early stages of their relationship but we can tell it’s going to last; you don’t buy a car as rare as this unless you’re serious about it, it’s not a casual purchase and we reckon this one’s a keeper. Alex is looking to further bolster his classic BMW collection with either the addition of an E34 M5 or an E28 535i or M535i Saloon, and we certainly won’t be surprised if it’s the latter.

Whatever he does buy next is unlikely to be as special as his Touring, and that’s quite an achievement­.

“ The rarest E28 of all is undoubtedly the Touring. This model was not an official BMW creation, with just a handful ever produced by a handful of German companies”

“To hit that ride height sweet spot he’s attacked the Touring with a two-hit combo of serious suspension goodness, with BC Racing’s Extra Low coilovers bolstered by a set of Bags by Only Charged Dubs”