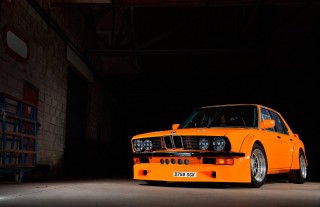 BMW E28 5 Series race car Gorgeous retro-racer packing a 360hp E34 M5 straight-six. The Turner Prize E28 RACE CAR. The Turner brothers had been yearning for an E28 racer ever since they used to see them pounding the circuits in period. And after a decade of practice in a Mini, this work-of-art race car is their reward… Words: Dan Bevis. Photography: Matt Woods.

The story of two brothers who decided to create a track weapon with an E34 M5-powered E28.

Folks who grew up in the late-20th century invariably have a fond attachment to the movie Toy Story. Released in 1995, this was the first ever feature-length computeranimated movie, and it’s impressively stood the test of time by still being watchable today, rather than ageing badly into a CG mess like all those awful Dire Straits videos. And generally you’ll find that fans of the film are either on Team Woody or Team Buzz – some love the forthright, futuristic, forward-facing energy of Buzz Lightyear, while others favour the honest-to-goodness old-timey wholesomeness of Woody the cowboy.

Not me, though. I side with Mr Potato Head. Always have done. His very existence, both on and off the screen, serves up a keen metaphor for reinvention and on-the-go evolution. Adaptability is his watchword – if you want to improve something, simply find a better thing to take its place. It needn’t be complicated, just get on and make it happen.

The searingly orange E28 you see here is very much the Mr Potato Head of retro BMW race cars. It’s not a slicks-and-wings Buzz Lightyear or a concourspristine Woody, but instead a car that cherry-picks superior parts from elsewhere in the BMW stable to make it harder, better, faster, stronger. Hidden within that robust and angular silhouette lies the bloodsipping fury of an E34 M5… but we’ll get to that in good time. Let’s first find out just where this lurid Bavarian potato came from.

Huw Turner is the man twirling the keys with a slightly dream-like expression, as if he’s seeing the true majesty of his creation through fresh eyes as it poses before the lens. “My brother and I used to share a classic Mini, which we sprinted and hillclimbed together for over a decade,” he explains.

“We decided to replace it with an E28 as we wanted something completely different to the Mini that we had been competing in; that was small, light on power and front-wheel-drive, while the BMW is big, rear-wheel-drive, and has lots of power! Also, we had always loved the period of circuit car racing that included the E28s and E24s.” A chance, then, to make those sparkling dreams of youth come true. Who could resist such a lure? 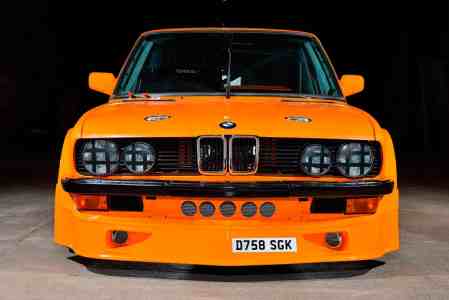 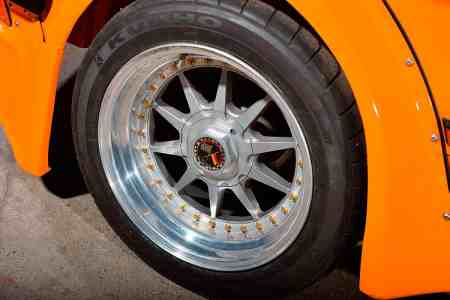 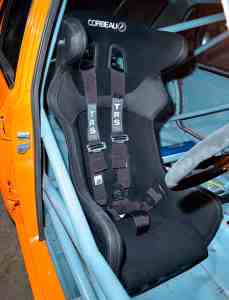 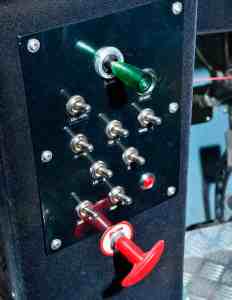 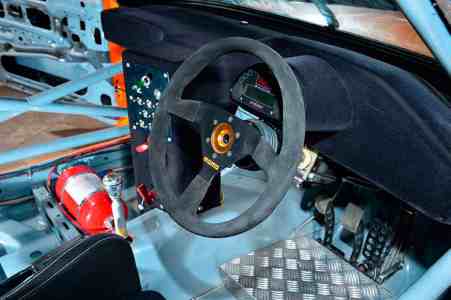 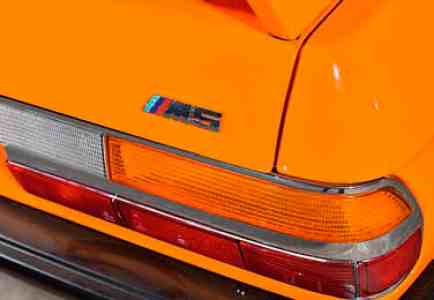 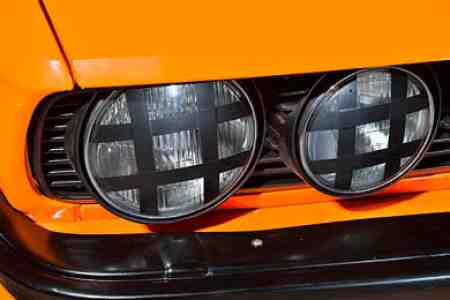 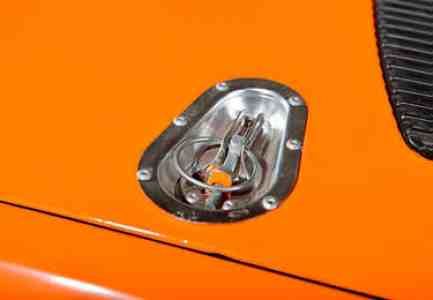 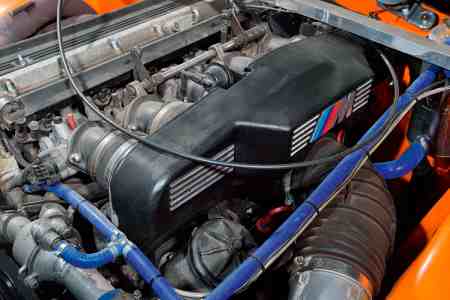 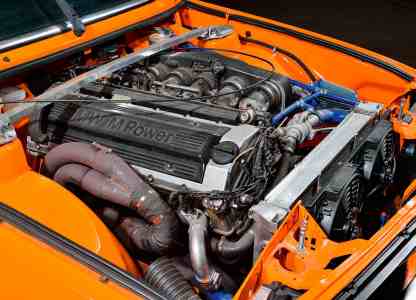 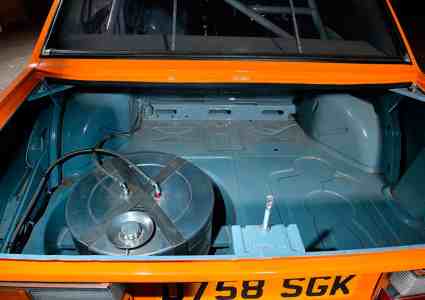 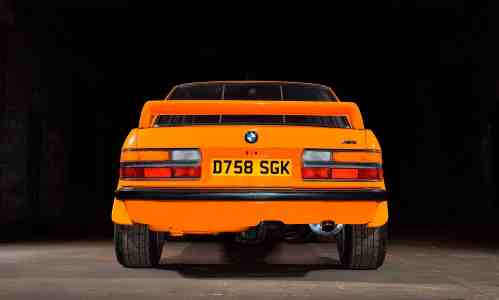 The custom switch panel was designed specifically to ape that of Huw’s other race car.

The plan, as is so often the case, started off a relatively simple one. The two brothers pinpointed a likely candidate in the classifieds, in the form of a 518i, and set off Dartford-wards to retrieve it and begin the process of transmuting it from pedestrian grocery-getter to flame-spitting circuit terror. With the Mr Potato Head ethos firmly entrenched, the guys also sourced an E34 Alpina with the intention of plucking out its noisy bits and shoehorning them into the older car. “The E34 was in a really rough state body-wise, but the engine was a good starting point,” says Huw. “The E28 did have an MOT, and we trailered it back to storage – but had several adventures moving it where it broke down. And it was at this point we became aware of Zaprace…”

Having contacted Zaprace’s Chris Randall to enquire about some body panels, Chris asked the fellas what exactly they were intending to achieve with their E28 project and, after listening closely and nodding sagely, suggested that he might have something in his lock-up that would be of interest to them.

“It was his E28 race car, sitting in a barn in bits,” Huw grins. “It had been partly rebuilt following a major crash that had written off the shell. The next thing I know, I’m on the way to Drifield, north of the Humber, in a Transit with a flatbed trailer to collect the majority of a former race car! It has lots of history, and even features on the front of the BARC Championship Raceday programme for August 16th 2003 at Silverstone. When we collected the car the brakes, coilovers, wheels and gearbox were missing, but we had a great shell which I gather was originally supplied new from BMW and had never been on the road. The shell had been stripped, acid-dipped and electro-plated following a rollcage being fitted and the rear arches tubbed. The engine was included, as were some doors and other bits and pieces.”

And so the plan to revivify and rework one E28 had spiralled into the collection of a pair of them along with an BMW E34… some decisive action was required at this point to move the project forward and stop Huw and his brother from inadvertently buying every available BMW in the country. You know how these things can snowball. So the dishevelled but peppy old race car was duly dispatched to Stuart Hayman of Coast 2 Coast Motorsport.

“Stuart had built our Mini, and thus he was the ideal person to restore and rebuild the E28 to the condition and spec you see it in now,” says Huw.

“There were a few hurdles along the way; the competition suspension proved tricky to source, for example – ultimately we had a new set made up for us by Gaz. And another major challenge came when my good friend Richard bought in and took my brother’s share of the car…”

Richard and Huw had studied at university together and are both dyed-in-the-wool petrolheads, between them also owning a Porsche 996, Mercedes G-Wagen, Mercedes SL, and an E90 M3 Saloon. With Huw’s brother emigrating to Australia, Richard was the perfect candidate to step in and buy out his share.

“Richard is six-feet eight-inches tall, while my brother and I are much more vertically challenged at circa five-feet eight-inches, so there were a few adjustments to be made,” Huw laughs. “When Richard was test-fitted in the car we discovered that the rollcage was too close to his helmet, and this resulted in major parts of the ’cage being removed, redesigned and reinstalled to ensure that it complied with the regulations and was safe. Richard had to have a custom seat made to accommodate his height too – Corbeau were very helpful, suggesting a seat based on models it sells in Scandinavian countries where people are generally taller. We’re also considering a sliding pedal box to give Richard a little more legroom.” Adjustability is key with two disparate body shapes taking it in turns behind the wheel; Huw has a sort of booster seat arrangement to get him into the right position, but it’s cooler than it sounds!

Now, as interiors go, they don’t come a lot more forthright than this car’s pared-back effort. The absence of carpets, doorcards or, of course, most of the seats means that the dash is the first thing to draw the eye, and it’s an item that’s taken rather a lot of work to perfect. The custom switch panel was designed specifically to ape that of Huw’s other race car, to save the effort of having to teach his musclememory a new layout, while the dash itself is a flocked affair that’s been reshaped to custom specs, with the instrument binnacle now housing a clever DigiDash 2 readout. You’ll also spot an Accusump reservoir in there. “Chris Randall explained when I bought the car that the Accusump was used by Alpina in the ’70s,” Huw elaborates. “They were used as an alternative to a dry sump. The system employs a bottle of pressurised oil which plumbs into the main oil gallery, so when you get oil-surge there is another supply available. Chris tells me that Alpina used it on the E9 CSL Batmobile racers.”

This sort of purposeful setup is all in-keeping with the brutal nature of what’s going on under the bonnet; while the S38 may be in a relatively stock state of tune (Huw gathers that it’s had some work prior to his ownership, and is in the process of finding out more), it’s still serving up a mighty 360bhp-odd in a relatively featherweight shell, and that’s more than enough to justify the chunky 750iL brakes that you’ll find at each corner.

“With any build of this nature, there are inevitably lots of custom parts that take time to make,” says Huw. “I couldn’t find any decent bumpers, so manufactured some glassfibre ones, and I’m really pleased with the results.

“The car hasn’t been anywhere as yet, other than a shakedown session at our local sprint circuit at Llandow,” he continues. “The session went really well, and nothing fell off! And the car always receives great reactions whenever I post updates online. We’ve recently acquired another set of wheels, and will be fitting slicks ready to start getting to know the car in 2017. The intention is to do several track days with tuition this year, with a view to racing in 2018.” All of which sounds very sensible – there’s nothing to be gained by rushing into these things like a bull in the proverbial crockery emporium, only to stuff it into the barriers first time out. Huw and Richard clearly intend to take a few scalps with this boisterously Tango’d E28, and every step of the process thus far proves that they’re keen to do things properly. The Mr Potato Head approach has served them well in the project’s chrysalis phase – now it’s ready to emerge as a shimmering butterfly, and they’re primed to switch allegiances to Team Buzz. To infinity, and beyond!

THANKS: “Thanks go to everyone involved in getting the car to the condition that it is in now, but mainly Stuart.”