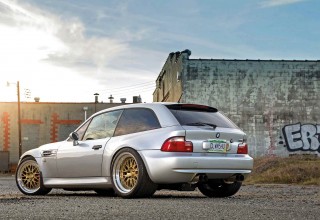 Insane Clown Colossi. The cartoonish Z3 M Coupé is a larger-than-life sports car wrapped up in a compact little package, and when you add forced induction into the mix, the clown shoe goes completely mental…Words: Daniel Bevis Photos: Mike Kuhn.

Nicknames can often be deliberately misleading. Like the muscle-bound bouncer outside your local nightclub, who’s so improbably ripped he looks like he’s been stitched directly into his shiny Next suit, and whom everybody calls ‘Fluffy’. Or your gran’s cute little kitten, who sleeps all the time and is essentially made of smiles, and she’s decided to call ‘Fang’. Such it is with the Z3 M Coupé – while UK fans may refer to it as the ‘bread van’ (a sort of catch-all nickname applied to pretty much any car which has had an estate-like glasshouse unsuspectingly grafted to its rump), in the USA this perky little thing is nicknamed ‘clown shoe’. You can see why, is it does share the proportions of one of Krusty’s size-19s. But when you look at the specs of the Z3 M, there really isn’t anything funny about it. This little road-racer is as serious as hell.

The restyling job carried out under the watchful eye of lead engineer Burkhard Göschel really was masterful, taking the wind-in-the-hair, laissez-faire vibe of the Z3 Roadster and angrying it up a whole bunch; the proportions of the M Coupé, particularly when viewed from the rear-three- quarter, suggest a caricature of a sports car – something so comically muscular that it surely can’t be real. But here it is, in the metal – a profile that’s basically four huge wheels with a small amount of bodywork in between. This subversion of proportion exists under the skin too, as the tiny little sports car has an M3 engine aggressively stuffed into it. For the first couple of years of production, they came with the E36 M3’s S50B32 (unless you lived in the USA, in which case you got the less powerful but still M3-derived S52B32); after 2001, as with the Titanium silver example you see here, BMW saw fit to send in the big guns – or, we should say, bigger guns – by fitting the S54B32 from the E46 M3. Caricature credentials well and truly assured there. Of course, for some people, too much is never enough. 320hp (for the US-spec engine) is a nice starting point, but where’s the fun in keeping things stock – even if ‘stock’ can be defined as ‘dangerously unhinged’? This is the case with Billy Dawson and his supercharged Z3 M, which is so gloriously daft it would be frankly negligent of us not to share it with you. “This is actually the first BMW I’ve owned,” Billy explains. “I’ve been interested in the marque since 2004, though, when a friend of mine purchased a 1999 Imola red M Roadster. The high-revving M performance engines, their aftermarket support, and the ethos of BMW Motorsport is what really drew me towards these cars. And the Z3 M Coupé in particular is such an interesting car – a small enough production run that it’s nearunique, and the sheer driving thrill of the S54 motor stuffed into the Z3 chassis.”

While this may be Billy’s first foray into hot BMWs, he’s certainly no stranger to the world of performance tuning; in true Carolina style it’s simply been more apple pie than bratwurst, as you’d probably imagine. The C6 Corvette has been a perennial favourite of his, rocking either the LS2 or LS3 V8 and up for a ruckus with whacking great gobs of good-ol’-boy horsepower. But having seen the Z3 M, he just knew he had to have one – and while Corvettes certainly have their merits, we’d (possibly controversially) suggest that the BMW is the smarter choice, with its hyperintelligent engine and poised, balletic chassis. And though 1400kg isn’t exactly featherweight, every gram is focused on the notion of going as quickly as possible to the next corner, getting around that also as quickly as possible, and repeating such behaviour all day long.

“I found the car advertised by a dealer in Denver, Colorado - Glen Shelly Autobrokers,” Billy recalls. “I called Alex at Glen Shelly and told him I’d be flying out from Charlotte to look at the car. Everything checked out from the inspection, and the car really looked great in person, so the deal was done and I drove it 1561 miles home.” That’s a truly impressive shakedown run. It often takes a while to learn to trust a newly-bought car, but if your first journey in it is the equivalent of driving from London to Monte Carlo and back, you’ve probably got to know it pretty well right away.

The Z3 M is a rare model in the USA, but not so rare that it’s strictly necessary to travel quite this far to acquire one. The reason behind the epic road trip is that Billy had quite a specific set of requirements in finding his dream clown shoe. “I was searching for a Z3 M Coupé with a big brake kit and aftermarket suspension work, but little to no engine modification,” he explains. “Just about every suspension piece on this car had been modified by the previous owner, along with the addition of Rotora fourpots, so it ticked a lot of boxes. My plan was to modify the engine to my taste.”

Indeed, the list of work already carried out on this car before he bought it was really quite impressive: it’s running Ground Control coilovers front and rear – with 650lb and 800lb springs respectively – along with Ground Control camber plates and rear shock mounts. Stiffness and control are assured by a Strong-Strut brace, H&R 28mm front anti-roll bar and Status Gruppe anti-roll bar end links, along with a comprehensive bushing session to tighten everything up, courtesy of Ireland Engineering and Turner Motorsport. Those Rotora brakes he mentions are clamping 355mm front discs and 335mm rears, with the ever-useful braided lines to firm up that middle pedal and Billy’s also opted for a clutch delay valve (CDV) delete, which delivers a smoother driving experience.

The nuts-and-bolts of the car were neatly taken care of then, and this canvas – while nowhere near blank – was all ready for Billy to splash his own bright colours across. Few could have predicted quite how hardcore he’d go, though, as the M3 engine in this sparkling silver bread van is already a mighty and aggressive unit. Can it ever be strictly deemed necessary to inflate its ego by supercharging the thing? Perhaps not. But heroes don’t live their lives by doing what’s necessary, do they? You only live once, you’ve got to roll the dice, so Billy got on the blower to Active Autowerke to chew their collective ear about the Prima supercharger kit.

This is a pretty forthright package, centring around a Rotrex C38-92 blower and complementing it with an Active Autowerke Gen-VII intake manifold, bespoke double blow-off valve system, larger fuel injectors, colder heat-range spark plugs, and topping it all off with an Alpha N software tune. This is a company who have been specialising in performance-tuning BMWs since 1981, so it’s fair to say they know what they’re playing at. And when the horsepower gains at the wheels can be as much as 50%, who could possibly question the brilliance of the idea? OK, certain purists may shudder at the idea of introducing forced induction to an old-school NA M3 engine, but Billy’s happy to leave those people back at the starting line, munching bitterly on brackish mouthfuls of his dust.

“All of the parts were installed by EuroMpire in Monroe, NC, over the course of a week,” he says. Impressive, no? The thorough and proven engineering of the Active Autowerke setup means that, in as little time as it takes to work through a Craig David love affair or a Solomon Grundy life cycle, Billy’s gleaming acquisition became startlingly more powerful while also remaining OEM-reliable. What a time to be alive, huh?

In addition to the shrieking blower, Billy saw fit to augment the new-found treble with a little bass, courtesy of a full Magnaflow exhaust system mated to Active Autowerke’s own cat-less headers. The interior now bristles with data readouts to help keep an eye on everything under the bonnet and ensure that nothing’s amiss; auxiliary gauges monitor boost and other vital signs, all neatly integrated into the classy Z3 M innards.

That intelligent chassis, while superbly upgraded, came in for a few further improvements; namely a rear subframe reinforcement and dual diff mounting points from Randy Forbes, and the diff itself now wears a finned cover by Rogue Engineering. And the final piece of the puzzle was the wheels… “The exterior styling hasn’t been altered – I just don’t feel that the car needs it,” Billy reasons. “But I wanted to fit the CCW LM20s, they’ve been my favourite wheel design for some time, and with the added power I was in search of a wider wheel/tyre combination. These CCWs were previously owned by another Z3 M Coupé owner and became available shortly after my supercharger install so the timing was perfect. I got lucky being in the right place at the right time when they came up for sale!” The footprint is appropriately broad now, with those 11”-wide rears wearing 315-section P Zeros, which is basically entering supercar territory, and once again indicative of how cartoonish the Z3 M is in factory form, that such colossal rubber can be fitted under the stock arches.

All of this work adds up to a beautifully resolved package. “I can’t say I could even pick a favourite modification,” Billy ponders. “The suspension, the brakes, and the added power all together is what makes this car a blast to drive. And future plans? Well, I’m looking into different cams and meth injection, but basically I just want to enjoy it.” Rightly so, we say. It’s the modifying dream, to have a clear vision of what you want to achieve and then for it all to neatly work out, so Billy’s earned the right to have a thoroughly silly time in his cartoon clown shoe. Silly… but at the same time, deadly serious: this car is far more Pennywise than Ronald McDonald, and it’s certainly not taking any prisoners. 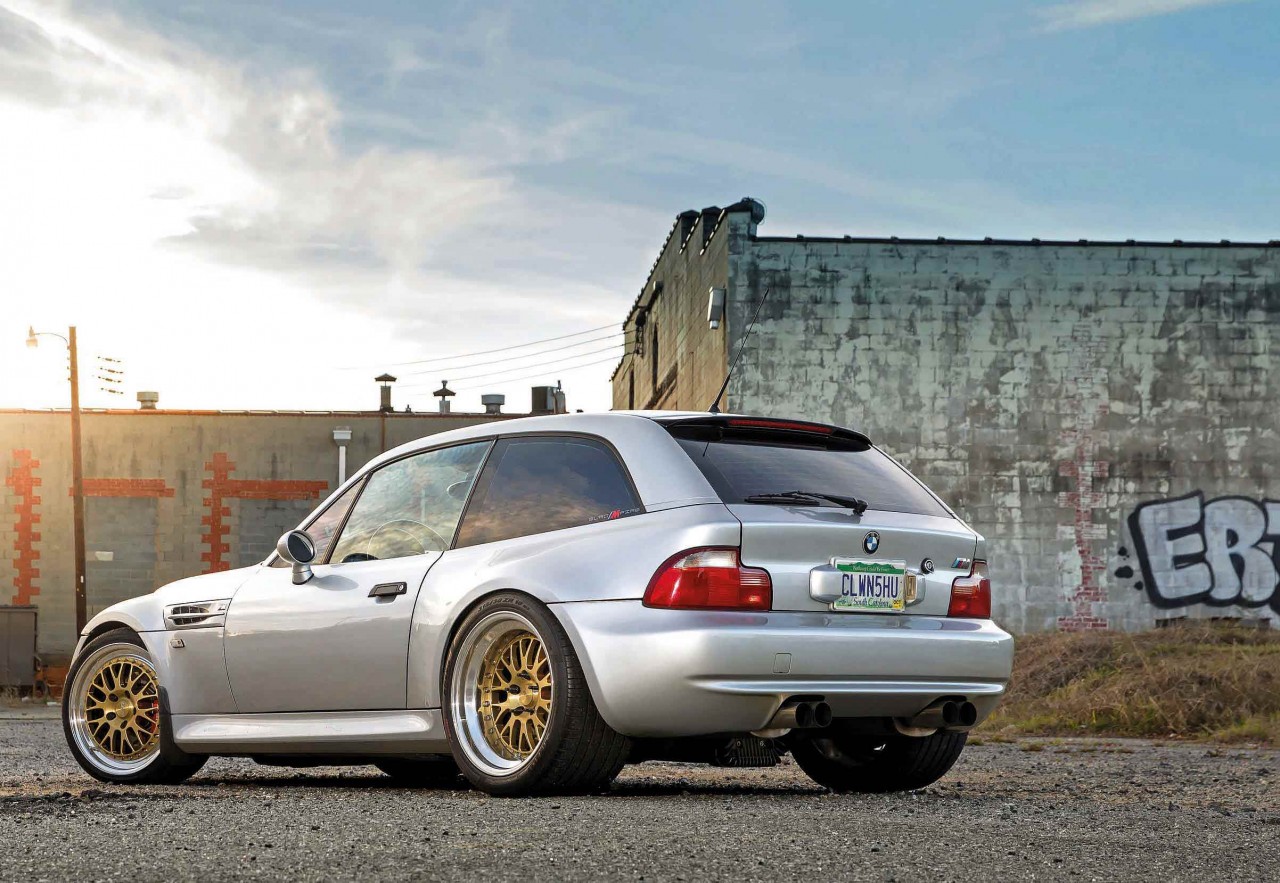 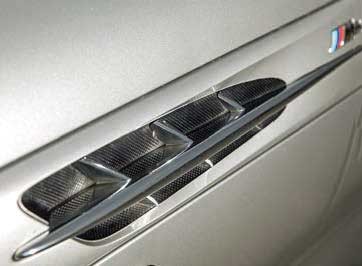 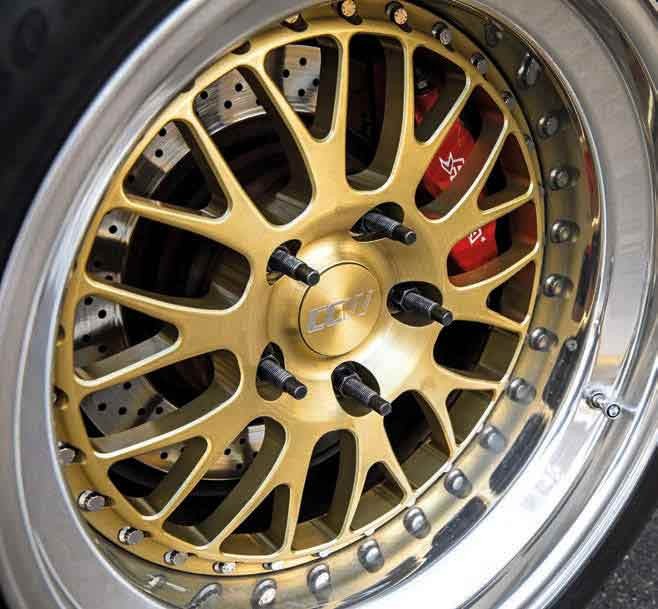 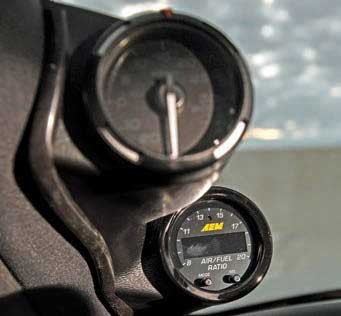 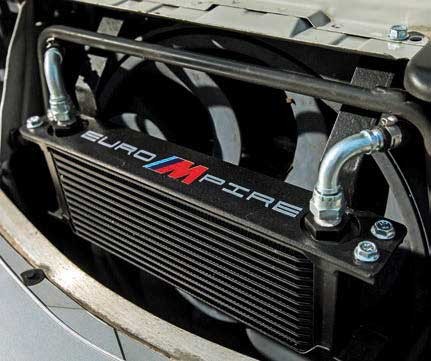 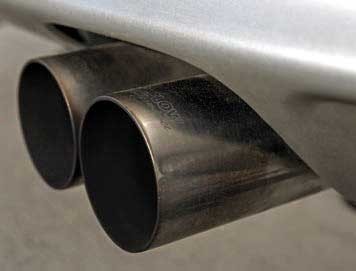 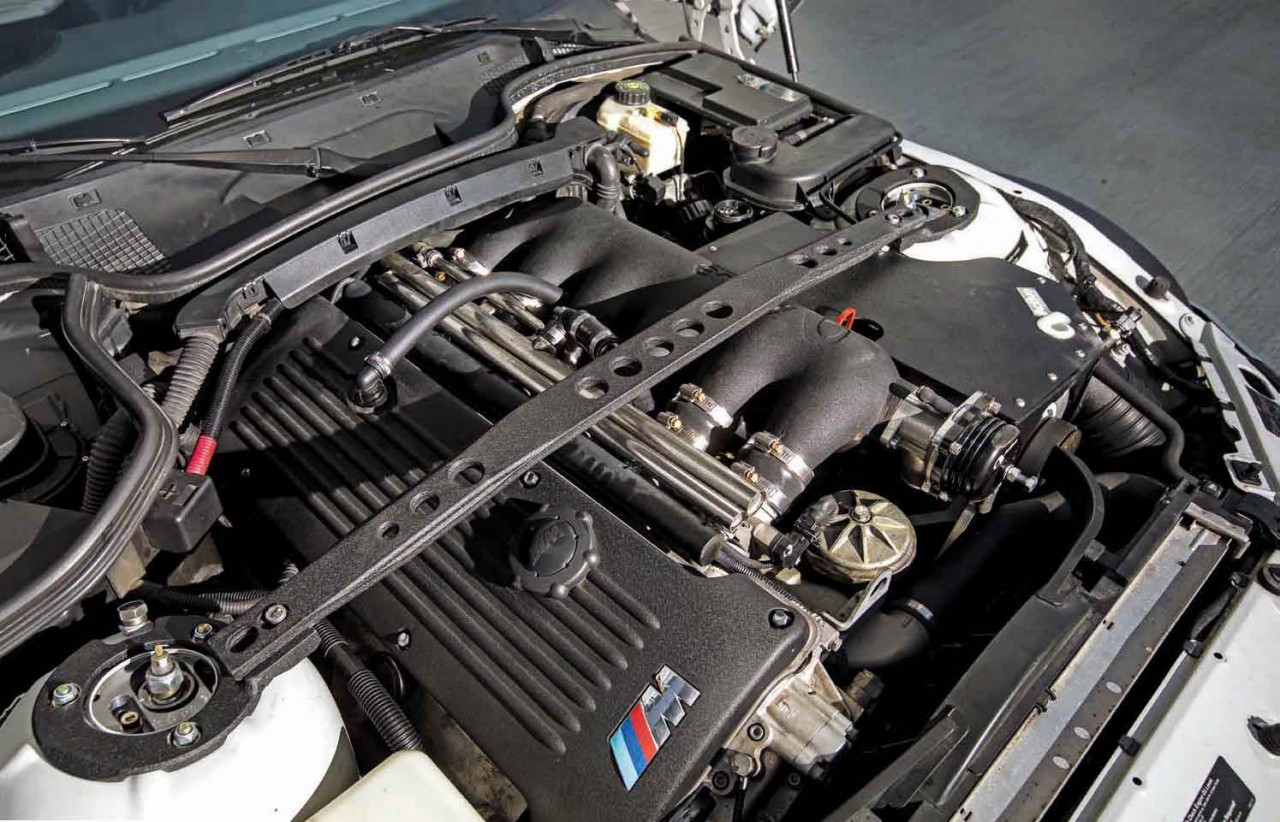 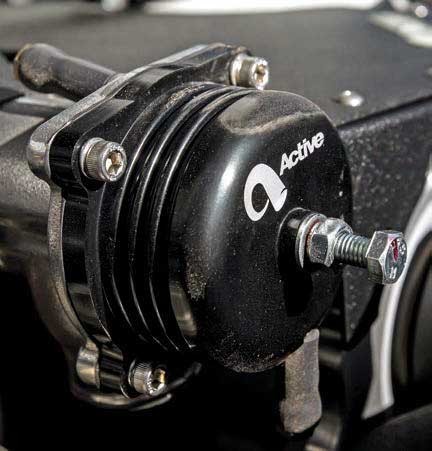 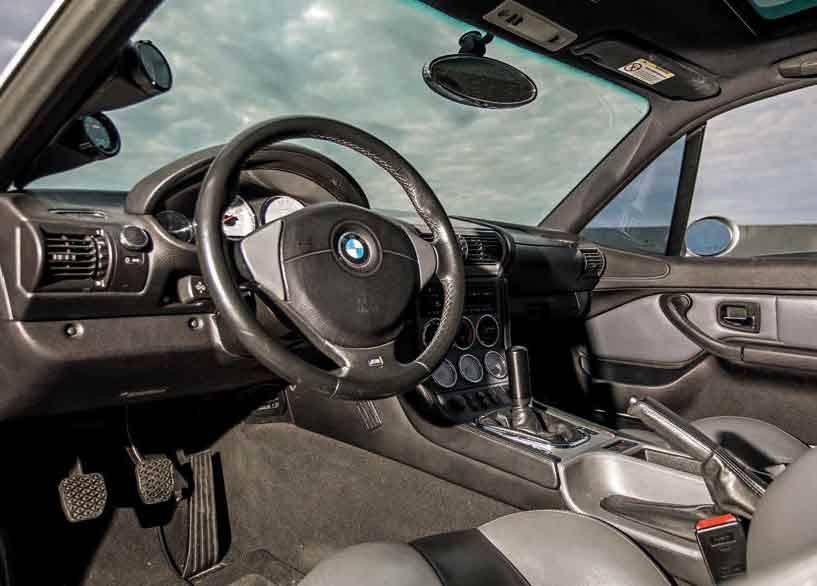 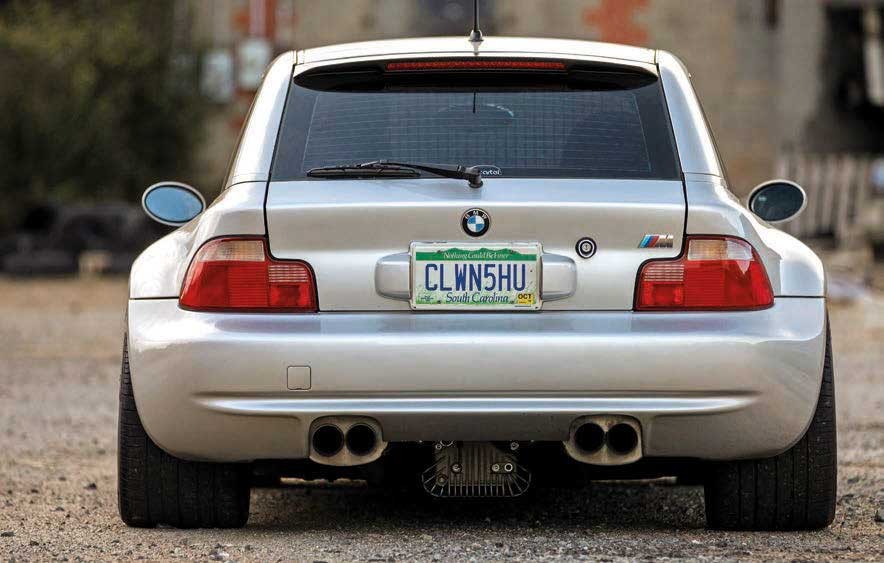 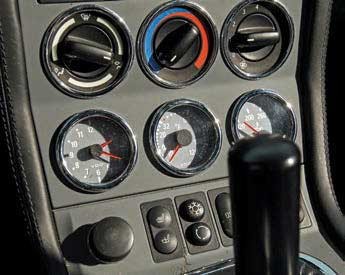 “Just about every suspension piece on this car had been modified by the previous owner, along with the addition of Rotora four-pots, so it ticked a lot of boxes”

“The Z3 M Coupé in particular is such an interesting car – a small enough production run that it’s near-unique, and the sheer driving thrill of the S54 motor stuffed into the Z3 chassis”

More power for the classic Z3!

Mark HYDRO Dixon
There are no comments posted here yet