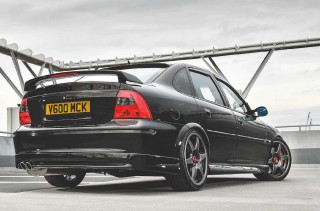 It’s September 2000. Technicians at renowned competition car tuner, Motorsport Developments (MSD), are applying final tweaks to a new breed of Vectra B GSi. Equipped with a 2.6-litre version of its predecessor’s smaller-displacement V6, the first example of Vauxhall’s new sports machine rolls off the production line in the form of a black saloon. Leading the charge to the open road, the car is fitted with every option, including sunroof and a rare full-colour information display with integrated satellite navigation. Swish! 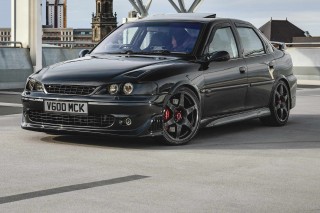 Pulling out of the factory gates, this fiercest of Vectras enthusiastically pulses towards a predetermined future as one of the manufacturer’s pool cars. Sadly, the good times don’t last long; as the mid-noughties arrive, the second-gen Vectra becomes less desirable than last week’s milk, leading GSi 26001 to be left out to pasture in a quiet corner of the company’s car park.

Two years pass before the black beast sees its next glimmer of life. Keen to see the car safe in the hands of an enthusiast, a lateral thinking Vauxhall employee posts on the Vauxhall Vectra Owners Club forum (vvoc.com) appealing for a new keeper to step forward. The deal being offered was simple. It was also mind-bogglingy unusual: the first committed Vectraphile to show an interest could have the car free of charge. Yes, you read that correctly. Zero pence. What an opportunity!

Mike Mant was the quickest to his keyboard, subsequently becoming 26001’s first private owner. Keen modifier, Steve Francis, was next to see his name on the car’s logbook. In his custody, the six-cylinder stunner gained everything from upgraded front seats to a full Bastuck twin-exit exhaust and an Omega B’s 3.2-litre V6. By 2016, however, Steve was ready to move on to a new ride. 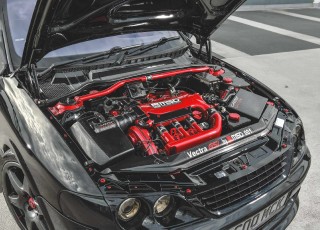 He couldn’t have picked a better buyer when he mentioned the prospective sale to his friend, Mick Johnson. The CNC router operator from Bradford has been a GSi nut since he first spotted a tidy example of the model on the road back in 2002. “I wanted one from that moment onwards!” he smiles. Enough pennies were saved to buy a 2.5-litre GSi before months of careful modifying were topped-off by a feature in Performance Vauxhall (then known as Total Vauxhall) and eight years of happy motoring. A Japanese diversion in the form of a Bugeye Subaru Impreza STI disrupted the proceedings, but the call of the Griffin was much too strong to ignore. “I loved the Scooby, but I missed the Vauxhall scene and the fellow owners I spent good times with at shows,” sighs Mick. He reasoned another Vectra was the only way forward.

He bought a silver 2.6-litre GSi, which fast became a modified masterpiece. Key changes included Apex coilovers, a 3.2-litre engine swap, custom bi-Xenon headlights and more Irmscher parts than most petrolheads can hope to imagine. Needless to say, the car became well-known, but Steve’s offer resulted in a shift in focus. “I’ve followed 26001 ever since it first appeared on forums,” continues Mick. “I really wanted to own the car and wasted no time in agreeing a price with Steve. The problem I had was being in love with two GSis, but only being able to keep hold of one. I remember machine-polishing 26001 and parking it next to the silver car. The new arrival’s black bodywork looked so much better. It was at that point the decision was made.” He wasn’t going to let the silver GSi go easily, though. Determined to stick with the bigger V6, he decided to swap engines between cars. 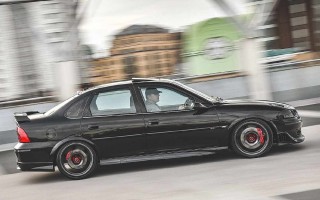 After dropping subframes, Mick and his mechanic father (also named Mick) refreshed the 3.2 with a Courtenay Sport lightweight crankshaft pulley, a flywheel from the same Vauxhall specialist, Vibra Technics engine mounts and Piper fast-road camshafts. The black car’s cabin was also revolutionised with chic Recaro Trendline front seats, while grey interior plastics were coloured black by the guys at Airtime Paint in Dorset. A tonne of standard trim then hit the bin in favour of Irmscher pedals, kick plates and floor mats. Vauxhall’s legendary styling partner also provided carbon-effect parts, including the coin tray, gear stick surround and handbrake cover. As a personal finishing touch, Mick commissioned custom dash dial inserts featuring the MSD logo and his longstanding forum handle, V6MICK, emblazoned on the faces. A full respray was followed by a Stage 2 detail and ceramic coating courtesy of JC Detailing. The process delivered an ocean deep sheen, ensuring the exterior is as bold as it is black. Morette quad headlights, Team HEKO wind deflectors, Opel taillights from Brazil and a custom extended bonnet ably push the darkhued theme, while Mk2 Astra GTE vents tip the proverbial hat at Vauxhall’s long run of pre-VXR fast-road scene smashers. Under the long hood, a riot of Chrysler Candy Apple Red and carbon-dipped componentry has the engine shocking like a steel heart, but it’s the Irmscher parts that shout loudest of all. 26001 bristles with the German firm’s upper and lower grilles, rear apron and side skirts. The latter were an especially stunning find, as Mick explains. “Phase 2 skirts are very difficult to get hold of. Fortunately, I spotted the parts attached to a neglected Vectra B being advertised online. The car was dumped on its side, but I instantly recognised the rare Irmscher items looking sorry for themselves!” 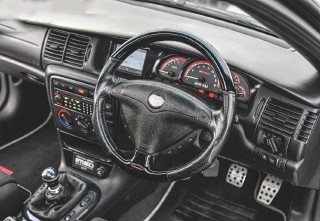 His Vectra’s body is committed to the all-black attack, yet Mick hasn’t been afraid to experiment with the wheels his car rides on. At the point of purchase, 26001 was rolling on genuine Corsa D VXR eighteens, but Phase 2 Vectra B GSi alloys took up residence a short while after the car arrived at the Johnson family home in West Yorkshire. Carbon-wrapped BBS Performance Line REs took their place a short while later, but the pristine Griffin would wear them for little more than a year before the appointment of rarer rims plucked from the long-gone silver machine. “When I first bought them, I wanted a design of wheel nobody else had ever fitted to a Vectra B,” he reveals. He’s talking about Compomotive MO6 six-spokes, an iconic offering from the motorsport-focused wheel manufacturer. MO6s are usually found decorating the corners of Cosworth-badged Fords, but finished in a custom silver-black powder-coat and decorated with bolts and centre caps painted Candy Apple Red, they’re the perfect choice for this special Vectra.

Barely a blink above, the arches hunch tight over tyres. As standard, the GSi sits 20mm lower than regular Vectra Bs, but Mick’s car runs far closer to the floor thanks to a set of Spax RSX adjustable coilovers. The RSX units were chiefly chosen to fully lower the rear without forcing a helper spring delete, but teamed with Aluminati adjustable drop links, a Whiteline rear anti-roll bar and a full conversion to Powerflex Black Edition polyurethane bushes, the result is a chassis which follows through on the hardcore aesthetic. 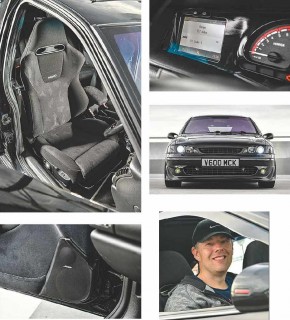 Only the brakes needed attention to complete 26001’s mechanical transformation. Thanks to Steve’s efforts, the car was already making use of large front discs slotted into Brembo four-pots. It also featured a rear end loaded with SAAB 9-5 Aero stoppers, but Mick wanted to take things a step further. “The Brembos were brilliant!” he cries. “The only negative I have to say about them is they simply didn’t look big enough behind the new wheels. Being totally honest, I swapped to AP Racing brakes and 330mm discs for looks more than performance!”

Today, there’s not an inch of 26001 that hasn’t seen improvement through significant modification, but not everybody is a fan. “I got a fair bit of grief after buying the car,” Mick remembers. “Many people told me I had a duty to return it to standard specification.” Of course, that was never going to happen. After all, he wanted to build the car to suit his own taste in performance and looks. To that end, across the Irmscher-littered exterior, over the all-black cabin and all the way through to the oily bits, the superb style of the first 2.6-litre Vectra B GSi goes where more cautious owners fear to tread. Number one is now one-and-only!

BEST THING ABOUT YOUR

The Candy Red engine bay gets lots of attention! 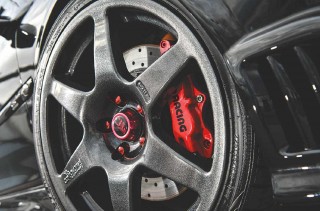 THANKS Terry caston at airtime paint for the interior work and mirrors, ade pettitt for his advice and hours of phone abuse, Barry morton at rascal Joinery and coatings for the carbon-dipping, Josh at Jc Detailing for the detailing and ceramic coating, andrew Haselgrove for the candy apple red paintwork, my old man (mick Sr) for all the hours helping me put this car together, and to my wife, adele, for putting up with all my crap!

“MO6s are usually found decorating the corners of Cosworth-badged Fords”

The revolution will not be televised…