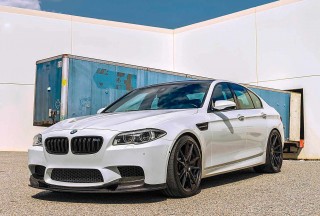 With a monster engine making over 1000whp, this is the planet’s most powerful F10 M5. Brace yourself… Words: Elizabeth de Latour. Photos: Viktor Benyi.

BMW’s move to turbocharging for its M cars brought about a sea change in the modifying world. Companies and owners went from extracting marginal horsepower gains via intakes, exhaust manifolds and remaps, or using aftermarket forced induction for big gains, to suddenly finding themselves with everything they needed for huge power right before them. BMW had done all the hard work, laid the foundations and gifted them with a selection of turbocharged machines that were suddenly able to give them impressive gains for very little effort. 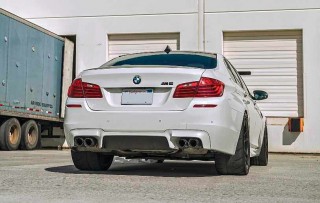 A new age was upon us and, if you wanted to go faster, life was good and gains were great. But that’s the thing with power, once you’ve had a taste you want more and some people will go to any lengths to get all the power they can get their hands on. Power corrupts, but absolute power corrupts absolutely and that makes this F10 M5 an unholy, corrupted creature not of this earth because its power level is something to behold…

The custodian of this all at once terrifying and yet seemingly understated F10 M5 is a mysterious, enigmatic character – on Instagram he goes by @allmotor_2000 but for the purposes of this article we’ll just refer to him as the owner. For the owner, life is to be lived in the fast lane and preferably travelling faster than anyone else, judging by the fact that this M5 shares garage space with a 991.1 Porsche 911 Turbo and there’s an F90 M5 Competition on order too, and that’s before we’ve even touched on the modified machinery that makes up his motoring past… Most importantly, BMWs have always played a big part in his life and he’s most definitely one of us; “I have loved BMWs and M cars in particular from the time the E39 M5 came out,” he begins.

“My first BMW was a 2001 E38 740iL; I bought this car because I had just had my first kid and wanted something spacious, comfortable and safe for the family, and I bought my first M car in 2009, an E60 M5, and since then have always enjoyed the M5. It is a very dynamic and capable car that also has four doors… unbelievable engineering,” he enthuses and we are with him on that one. The aforementioned modified machinery he’s owned includes a ’93 Civic that won the title for fastest NA Honda in 1997, a Honda Prelude running 400hp with a custom turbo setup, an NSX, a custom-turbo-equipped Acura CL Type S, and that E60 M5 he mentioned? Yeah, turns out that was running an ESS VT750 supercharger, which must have made his F10 M5 feel slow when he first got his hands on it. 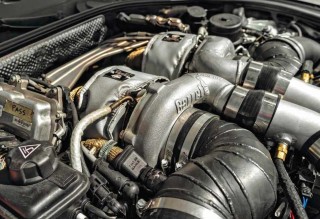 “I was very familiar with the F10 M5 chassis and wanted to start a new project from the beginning,” he explains as we discuss this build. “I knew I would modify it but had no plans on the extent of what I wanted to do,” he adds and when you learn just what’s gone into this project, you understand what he means. What you have to understand about this build is that it’s all about the engine; yes, there are other mods throughout the car but the absolute focus of the owner has been on building the engine up in order to make this the most powerful F10 M5 the world has ever seen – and it is. Step one was building the engine to take the sort of power that the owner was aiming for and this car is on a whole different level. “I had a spare S63 engine, so I sent that to Carbahn Autoworks – which is owned by Steve Dinan – for the build,” he says, at which point you’re probably wondering who has a spare S63 engine just lying around but, as we said, this build really is something else. The engine build took two months, during which time the stock S63 was transformed into a Carbahn Autoworks S2 engine, with uprated rods and pistons, ported heads and upgraded cams and the high-pressure fuel system flow rates were also increased. “Once the engine was done it was swapped in a few days and then I had to do the run-in process,” the owner tells us and while this was happening the drivetrain was upgraded with an SSP Spec Z 20(!)-plate clutch system with upgraded billet baskets, capable of handling over 1000lb ft of torque, a carbon fibre propshaft and Drive Shaft Shop 1200hp axles, which gives you a hint of what was to come. “Once the engine was run-in, the turbochargers were upgraded which took around two months as well and the tuning process took another month,” says the owner. The stock turbos have now been replaced with a Pure Turbos Stage X Turbo System, which means there’s now a pair of Garrett GT3076R turbos nestling within the centre of the V8. They are joined by a DME Tuning back-end flash for baseline timing and fuelling, a custom JB4 for boost and water injection control, Pure/CSF upgraded intercoolers, a Burger Tuning custom intake system and additional heat-shielding and thermal protection throughout the engine bay. The end result of all this incredible engine work is a scarcely-comprehensible, dyno-proven 1076whp and 1043lb ft wtq, which are the sort of numbers that you can’t really wrap your head around. That’s the sort of power figure you can’t contextualise; it’s so much power that it’s just an abstract concept, really. What you have to bear in mind is that this isn’t some stripped-out drag car – this is a daily, more practical and usable in absolute terms than the 911 Turbo with no luggage space and tiny rear seats. This is a car that just slides in between traffic on the freeway, with little to give the game away, almost nothing to suggest to anyone else that they are sharing the road with an absolute monster.

The rest of the mods on this car are mild because this was never about creating some sort of show-stopper, this was about making a very, very fast car and everything else that has been done and will be done is all about helping to make it even faster. “I had planned on swapping to lighter brakes and shocks to reduce rotational mass. These have not been done yet,” the owner tells us so, for now, the brakes and suspension are stock but, as you can see, the wheels have been changed and lightness was the deciding factor; the current set is more of a stopgap solution but even these couldn’t be any old wheels. “I was considering the ESE Carbon Fiber wheels, which weigh in at 12lbs each, but they are not available yet. So in the meantime I ordered a set of Rohana RF2 rotary forged wheels (22lbs each) while the Carbon Fiber wheels are being designed,” explains the owner and these 20s look really good and contrast perfectly with the M5’s white bodywork.

With 9s up front and 11s at the rear they’ve got some serious girth and have been wrapped in some seriously wide and seriously sticky rubber, with 265 section Michelin Pilot Super Sports up front and huge, 315 section Toyo R888Rs at the back, the only tyres short of drag radials that are capable of even getting close to putting all that power and torque to the tarmac. The finishing touches are a carbon fibre front lip, the roof has been wrapped black and all the exterior chrome trim has been blacked-out, making this M5 a monochrome marvel and an exceptionally discreet one at that, considering how much power it’s putting out.

In terms of sheer power, this is without doubt one of the most awesome builds we’ve ever come across – awesome in the absolute sense of the word. The work that’s been poured into the engine is astonishing, the turbos are vast, far too big to be contained by an engine cover and they now dominate the engine bay – no mean feat when the rest of the engine bay is occupied by a 4.4-litre V8 – and the end result, the numbers it produces, are simply mind-melting. Unsurprisingly, having built this M5 up to this stratospheric level, the owner is done, with just the aforementioned suspension upgrades and carbon wheels to come and that’s it. But for how long? How long before he becomes accustomed to the power that this M5 is now producing? How long before it becomes familiar, he becomes bored and, suddenly, finds himself craving even more power? It’s a terrifying proposition, one that will surely see the government order cities to be evacuated, people huddled in bunkers and the streets abandoned because that level of power surely cannot be contained. We can’t wait.

“The finishing touches are a carbon fibre front lip, the roof has been wrapped black and all the exterior chrome trim has been blacked-out, making this M5 a monochrome marvel”

“The stock turbos have now been replaced with a Pure Turbos Stage X Turbo System, which means there’s now a pair of Garrett GT3076R turbos nestling within the centre of the V8” 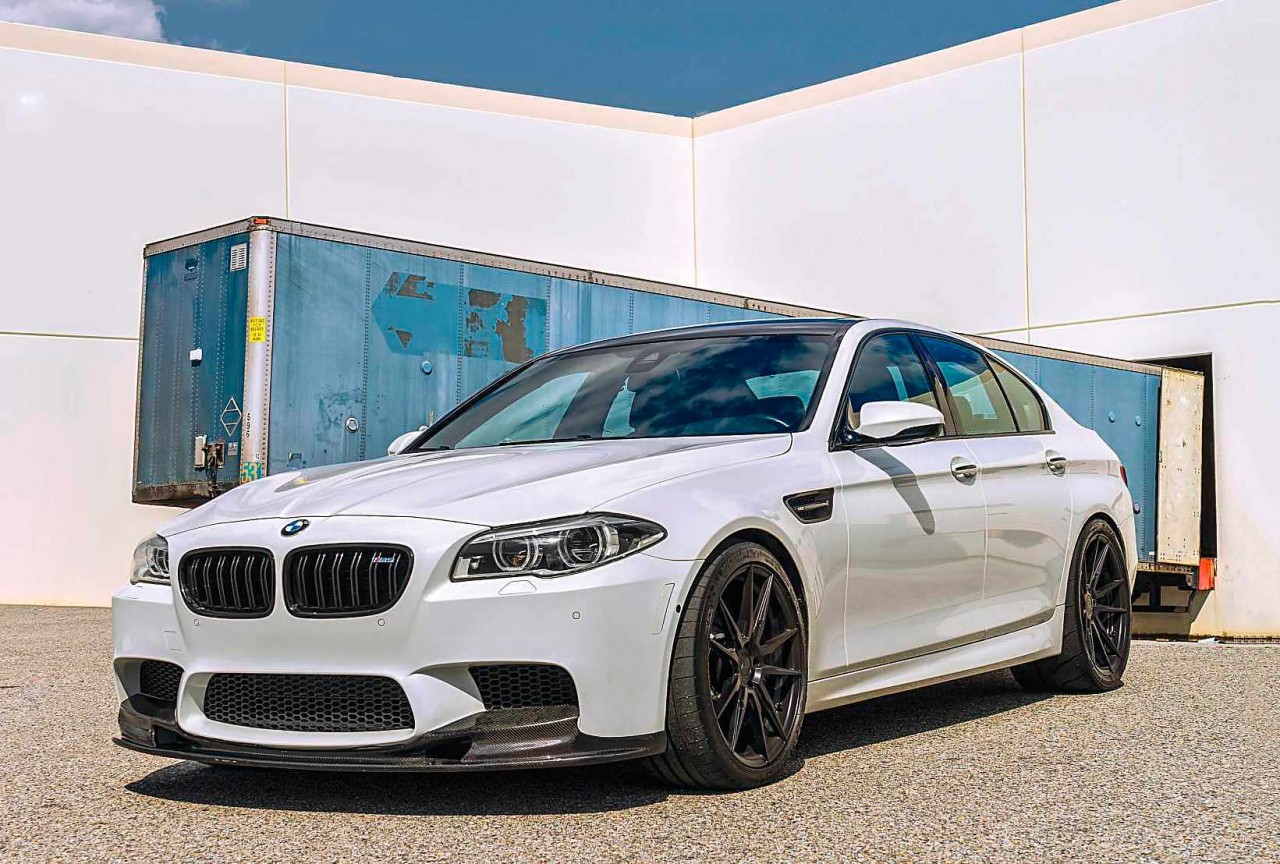 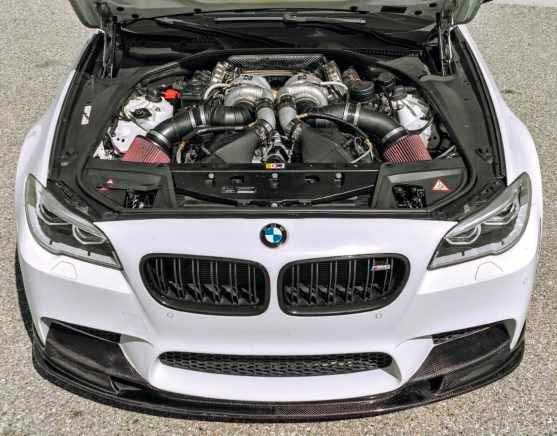 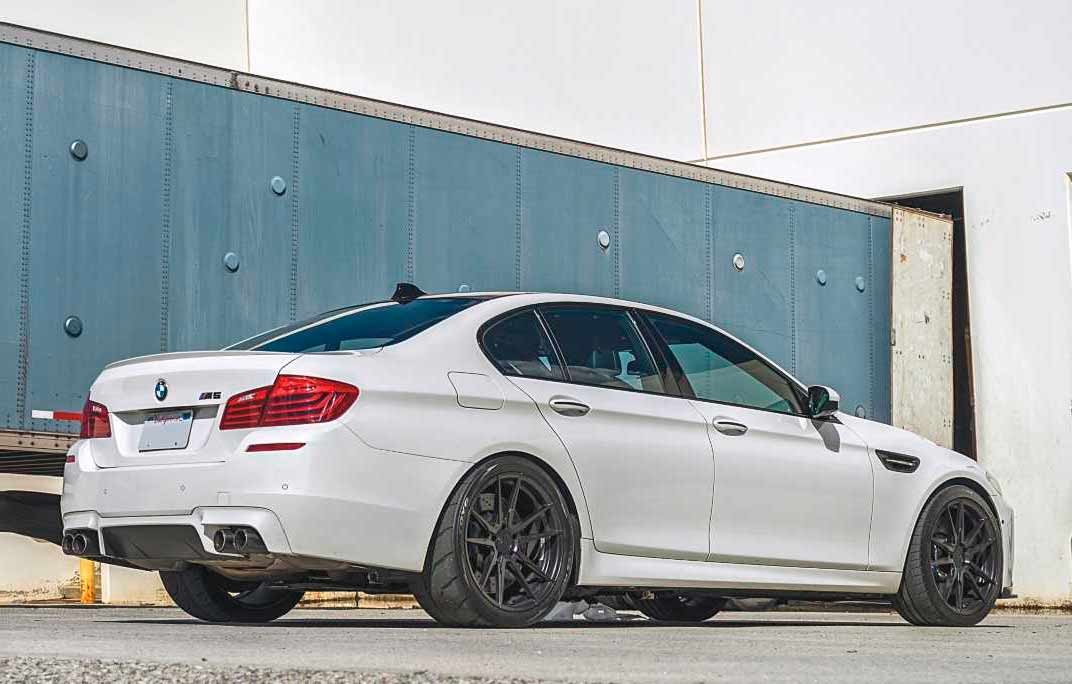 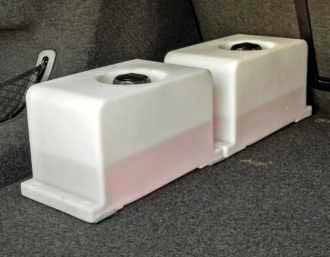 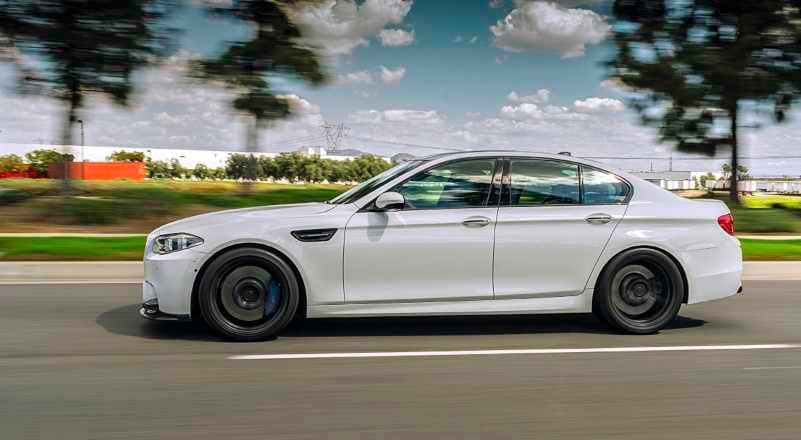 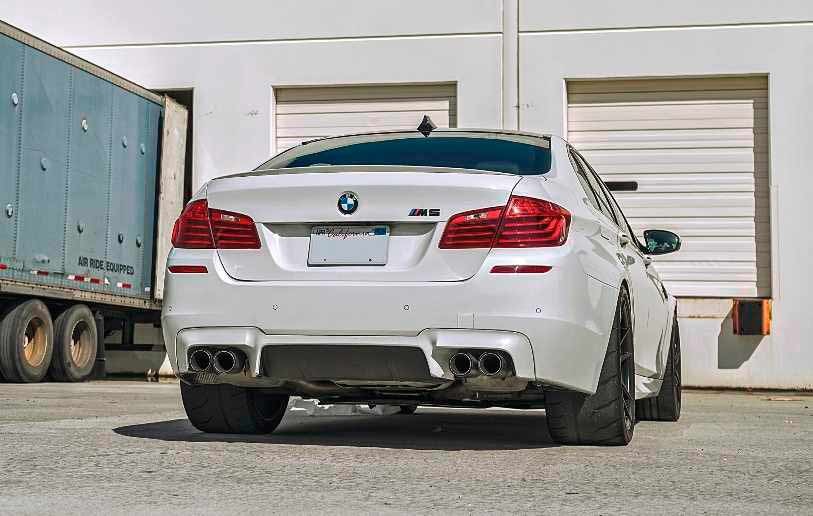 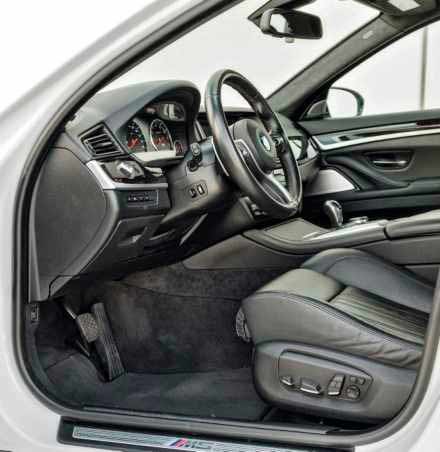 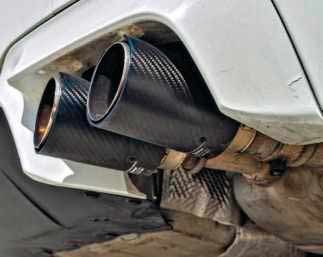 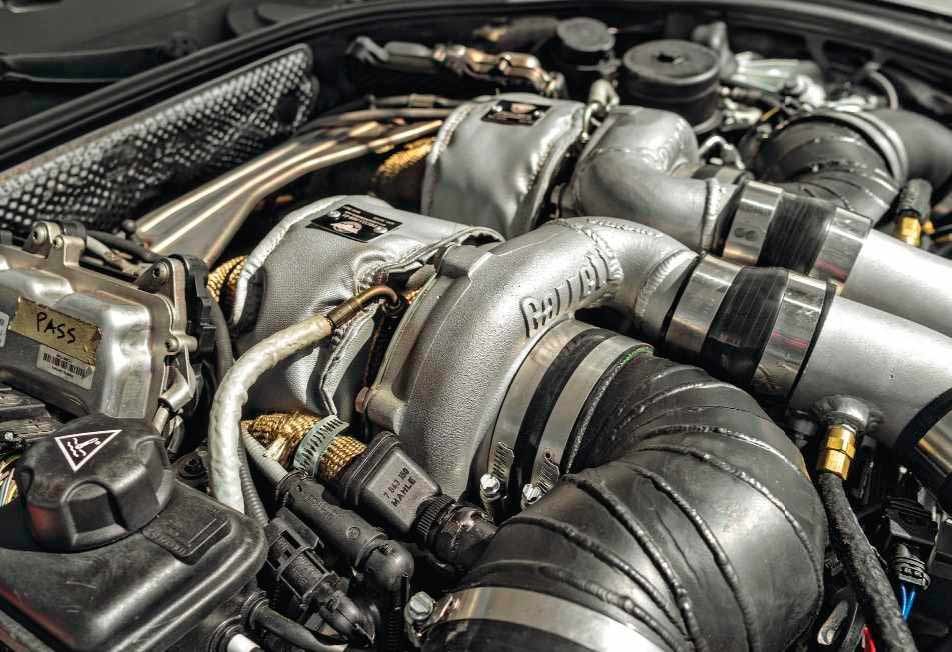