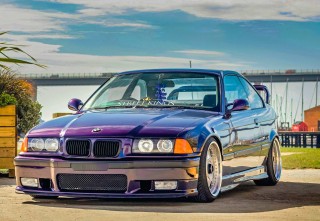 This car should have been a sensible daily driver. That was Stacy Brown’s original plan for it, merely a replacement for the old daily. But when you accidentally bid on a retro purple sports car, ‘sensible’ goes out of the window…Words: Daniel Bevis. Photos: Original Persona.

Stacy Brown is a unique thinker. This fact is self-evident, given that she’s chosen a 1990s coupé in an eye-catching shade of purple as her daily driver. While this plants her affections firmly in the arena of being ‘one of us’ in Drive-My terms, out in the wider world this marks an intelligent alternative to the easy route of just getting an anonymous new Corsa on finance or something. She needed a new daily driver as her old one had given up the ghost, and this 328i Sport was the result. 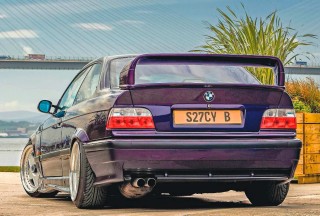 Being of such cognitive offbeatness, it perhaps won’t surprise you to learn that Stacy didn’t enter into retro BMW ownership via the traditional channels either. For many readers, the affection for the brand plays out along similar lines; either you grew up around these cars because your parents had them and they’re a vital staple for your formative motoring memories, or you spent your childhood glued to the TV watching BMW BTCC racers bouncing over kerbs, or simply that you once saw an E30 Cab or an M5 cruise down your high street and immediately and irretrievably fell in love. For Stacy, however, there’s no such long-standing passion. “I found this car on eBay when I was drunk,” she grins. Fair enough though, the journey and the destination are entirely separate things, and it’s safe to say that her first foray into Beemer ownership has spirited into creation something rather magnificent.

“My first car was a Rover 25,” she says, “and then I got into the Vauxhall scene everything from engine swaps in Novas to performance mods on Mk4 GSis.” So how did the shift to Bavaria play itself out? Seems kinda out of left-field? “I guess I’d always had a respect for BMWs, ever since I passed my test and started going to Crail Raceway and used to see them on the skid oval,” Stacy continues. “I’ve owned a few different BMWs now, and find them to be very versatile cars; the build quality is phenomenal, they’re easy to work on and modify, they can be everything from a drift missile to a comfy cruiser. And you can always tell a BMW in your rear-view mirror!”

“I was going to keep the car pretty stock, but then I was offered an M50 inlet manifold and a set of pink injectors at a price I couldn’t turn down… and then I stumbled across a set of Schrick cams!”

The marque certainly planted a seed then, and it’s pleasing to note that Stacy’s very first BMW, the E36 328i Sport, is the one we see here today; other examples have followed, but this is the car that worked so hard to worm its Teutonic wiles into her affections. “My last car had been written off and my original plan was to daily this one,” she explains. “Like I say, I’d enjoyed a few beverages before I found this car on eBay back in July 2015; it wasn’t in the best condition, and definitely looked better than it turned out to be!” All the key elements were in place, however. For one thing, it was wearing a dazzling shade of Techno violet paint, a connoisseur’s option that’s really worn the years well as a colour and earned its place in the pantheon of all-time great OEM paint shades. And of course, it’s no ordinary 328i – it’s a 328i Sport, which means that the factory spec includes the M Tech body kit, Sport suspension, and Sport seats. It’s starting to become a sought-after model these days, and regardless of its foibles Stacy had certainly bought well. 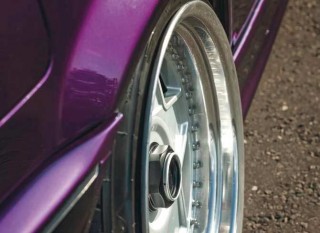 “Given that it was to be the sensible daily, I certainly wasn’t planning any engine modifications,” she goes on. “I was going to keep the car pretty stock, but then I was offered an M50 inlet manifold and a set of pink injectors at a price I couldn’t turn down… and then I stumbled across a set of Schrick cams! Amazingly, fitting it all went smoothly, even the setting up of the cams.” So in one fell swoop Stacy had imbued her M52 with a fresh sense of urgency – the Schrick cams in particular making a marked difference in providing greater power in the mid-range and topend without any loss of torque lower down. The M50 inlet swap is a proven entity too, a real no-brainer for these engines as it eliminates an unsavoury restriction with a free-and-easy path to increased horsepower.

As is so often the case, the modifications started coming thick and fast from this point onward. That’s what happens when you start off by doing something you said you wouldn’t do – you arrive at a fatalistic ‘Oh well, why not?’ scenario, by which time there’s no turning back. The floodgates are firmly open. “I was running HSD Monopro coilovers on the car,” she recalls, “although after a time I was finding them too stiff for everyday road use, I was after something a little more comfortable, so I swapped them for a set of FK coilovers and E30 bottom arms instead.” And with the car sitting pretty and proving itself to be very usable, the spectre of wheel choices started to rear its ethereal head. The Sport as-bought had come with a set of Style 5s, which is a perfectly decent choice and suits the E36’s profile handsomely, but Stacy was on the lookout for something that hadn’t been done a million times before. “A friend told me he had these Autostrada Modena wheels sitting split, acid-dipped, and with no hardware,” she says. “They were in a 4x100 PCD, staggered 9.5x17” and 12x17”. I took them, rebuilt them, hand-polished the lips and had the centres re-drilled to 5x120. They’re my favourite part of the car now, they’re so baller!” 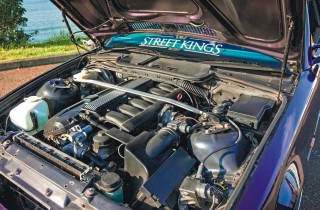 Another element of the car which was in situ when Stacy bought it was the LTW wing, that high-rise rear spoiler evoking the aesthetic of the limited-run M3 GT special. Indeed, this cool period upgrade was one of the first things that hooked her attention and piqued her interest in the car. “I quite liked it as it set it apart from other E36s locally at the time,” she reasons. “When the car went in for paint I decided just to tidy the wing up, and have my rear arches custom-modded with an OEM finish to accommodate the 12”-wide Autostradas – the rear arches are very subtle, the work on them is barely noticeable until it’s sitting next to another E36. I did try a GT splitter at the front too, but because I run quite low static I was just smashing them! I wanted to keep the car pretty OEM+, and subtle and sleek.” Admirable sentiment, although naturally there’s only so much subtlety one can achieve with Techno violet paint and a whacking great GT wing on the rear! Nevertheless, the overall effect is one of OEM perfection to the uninitiated. We can spot all the nonstandard tweaks because we know E36s, but to the average passer-by on the street you could almost believe that it came from the factory this way. Almost…

The next task on the to-do list (and we all know how these lists love to make themselves longer and longer) is to find a set of black Vaders to go inside. “I sold a full silver Vader interior – idiot, I know,” Stacy laughs. “But that money went towards the paint and bodywork on the car, so it was for the greater good! I installed the iS-spec interior from my other car in the interim, so that’s the next thing to take care of.” Further down that list we find the possibility of a full engine bay tuck, possibly a custom manifold and exhaust system, and maybe even an engine conversion. You see, that’s the nature of being a unique thinker. Having never owned a BMW before, Stacy jumped in with both feet and snapped up a whole bunch of them, and this particular purple monster has sat at front and centre of her affections ever since. 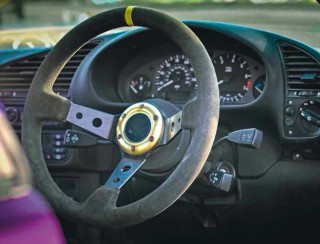 Starting from a position of ‘I’m not going to mod it, it’s a sensible daily’, she now finds herself cruising the mean streets of Glenrothes in a slammed and cammed retro coupé with style in spades and sufficient grunt to thoroughly embarrass whatever faceless finance hatchbacks may pull alongside at the lights. Which we thoroughly approve of – after all, where’s the fun in being like everybody else?

Stunning custom Autostrada Modena wheels and custom rear arches. 2.8 M52 has been fitted with an M50 intake manifold and a set of Schrick cams Front number plate blank has been added. 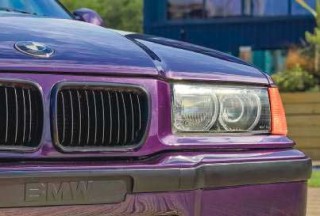 THANKS Thanks to Leven Coachworks, WheelCoat Fife, and JEA Engineering