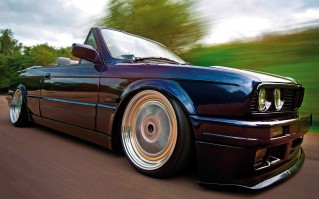 So, the E30 325i, what a car.   Arguably the pinnacle of the E30 family, not counting the M3, and the combination of iconic E30 body with that sexy, silky-smooth and hugely characterful M20 is one that’s absolutely irresistible.

Whichever body style you prefer your 325i in they’re all great but perhaps the one held in the highest esteem is the 325i Motorsport Convertible. Produced in limited numbers, the Motorsport softtop is the Holy Grail for many E30 fans and collectors, especially in perhaps the ultimate combo of lush Macau blue combined with bubble leather. This is, in fact, what you are looking at right here but, as you may have noticed, something is very different because where there should be an M20B25 there now sits an S54.

Sacrilege to some purists perhaps, sure, but for the rest of us what a combination this is, the sort of car we love and live for.

The custodian of this beastly E30 is Sal Carter, a man who has loved cars all his life and has settled into the BMW groove despite not growing up around them. “My dad was into Jags,” he tells us, “but I remember when I was about 11- or 12-years-old seeing a red E30 325i come past and from that moment on I’ve always wanted one.” Working as a car trader means that Sal has sampled a huge variety of cars over the years and, you won’t be the least bit surprised to hear, many of those have been BMWs, “I do love them” he grins, and he’s in good company. From seeing his first 325i it took Sal about 10 years to make childhood dream an adult ownership reality with this very car but the following 12 years, which brings us bang up-to-date, were not spent dedicated to crafting the machine that this E30 has become today. “I actually bought this car three times,” admits Sal, which is a surprising thing to hear but the fact that it always found its way back to him is what we love. It’s a bit like the Stephen King book, Christine, but without a killer car murdering people, thankfully. 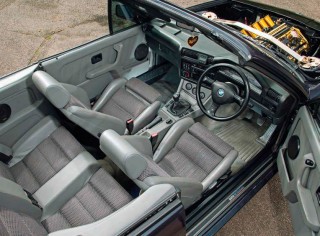 “I bought it back in 2005,” Sal continues, “it was completely stock and original and I paid £1400 at the time,” which is crazy cheap compared with today’s prices. “I had it for three years and sold it to a friend so I could buy a Cirrus blue one; I then ended up buying it back and sold it again for a Calypso red one with Lotus white leather before I bought it for the third time three years ago. It was still pretty stock back then, it was on coilovers and had a few other bits, but I bought it with a plan; I wanted to re-trim the bubble leather, I knew I definitely wanted air, a full respray and a set of custom wheels,” and it’s been mission accomplished on all those fronts.

The first item on Sal’s to-do list was the right set of wheels. “I’ve always liked the AC Schnitzer wheels,” he says, “but the offset was too high and I wanted to be able to tuck them once I switched to air. So, I bought a set of single-piece 14” ACS Type 1s and gave them to CR Customs who turned them into three-piece splits, stepped-up to 17s and specced for tuck.”

All of Schnitzer’s classic wheels look fantastic, especially when applied to a classic BM, and Sal’s decision to split a set of Style 1s was inspired. It’s such an iconic wheel that suits the shape of the E30 so well and stepping them up to 17s has resulted in the perfectly-sized set of wheels for the car in Sal’s perfect spec. At 8” up front and 9” at the rear they fill the Cab’s arches perfectly and slip under them equally perfectly once the car has been aired-out while the ceramic-polished faces and lips are blindingly brilliant; the finishing touches are, naturally, a set of gold nuts and gold hardware. 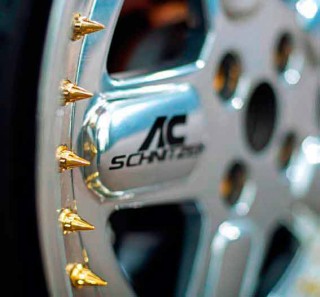 The whole car is a stunning showstopper, but the star turn here is without doubt the engine. The S54 is an engineering masterpiece, arguably one of BMW’s greatest-ever straight-sixes and finest motorsport power plants, so you’re off to a great start but the combination of E30 and S54 is just on another level altogether. “I wanted power,” says Sal, “and I liked the idea of having an older car with a newer engine. The E46 M3 is one of my favourite cars so I figured why not have the heart of that car in an E30?” and you can’t argue with that. The swap happened over the winter of 2016 and into 2017 and was carried out by Sal’s brother-in-law who runs G.N.R Motors; “It was straightforward,” Sal says, “but we had to get the oil pump running right and ended up using the pickup from an E34.”

The actual engine swap, though, was only the beginning and with the S54 ensconced in the E30’s engine bay Sal set about embellishing it. “I decided to think outside the box and went for the trumpets and the gold-plating” he tells us and that decision is what transformed this E30 from merely marvellous to head-turning show-stopper.

The engine cover has been removed and the exposed surfaces have been goldplated but that wouldn’t have been enough for Sal and so he’s opted for an array of different shades of gold to highlight various elements throughout the engine bay and across the engine. The top of the engine itself is finished in a lighter shade of yellow gold and topped off with gold spikes that match the hardware on the wheels; the oil filler cap and strut brace ,meanwhile, have been given a lighter rose gold coating and then we get to the velocity stacks. Normally Sal has these covered with filters and normally his Cab wears a full-size bonnet but for shows (and shoots) the E30 bares all. The velocity stacks are 51mm items custom-made in Japan as Sal wanted straight stacks made of metal and they have been finished in a deeper, richer and more intense shade of yellow gold, with a PSDesigns E46 M3 carbon cover plate trimmed to fit the E30’s bay and located beneath them to help deflect away hot air. The whole bay is immaculate and wonderfully clean, which means all eyes are always on the S54 and all those gold elements ensure that it always stands out and always draws a crowd. It’s not just a pretty face, though, as Sal has had it remapped and with the Sport button pressed the rev limiter is raised to a spine-tingling 8500rpm while the straight-through Milltek exhaust system ensures both ends of this E30 deliver a sensational soundtrack. Attached to the engine is the S54’s Getrag Type-D six-speed manual gearbox, enhanced with the addition of a stage one clutch, while a custom propshaft sends power to the rear wheels via an E30 M3 LSD running a 3.25 final drive ratio. 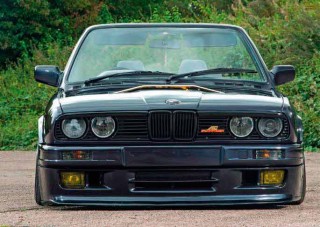 With the wheels and engine taken care of Sal turned his attention to the chassis; “I wanted the car low,” he explains, “but I was fed up with breaking the front lip with coilovers and I couldn’t get everyone in the car as it was too low then. I wanted to be able to drive the car without damaging it, which is why I went with air ride and I absolutely love it, it’s the best thing I’ve ever done in my life as I can actually drive the car and still have it low.” Aired out, with Sal’s custom-spec Schnitzers, the E30 sits super-low and looks absolutely awesome as a result and while not everyone is a fan of air, if you want this combo of lows and practicality without compromise (because who likes compromise?) it’s hard to argue against it. There’s more to the chassis than just the Air Lift suspension setup, though, and with so much more power on tap than any iteration of the E30 ever came equipped with, Sal has fitted a set of Wilwood fourpots up front to help up the stopping power. We’ve already mentioned that strut brace and there’s also an E46 Clubsport purple tag steering rack on board, which helps to sharpen up the E30’s helm.

As far as styling is concerned, the E30 is such a good-looking car that only a few subtle enhancements are required to bring out its best and add a splash of individuality and that’s exactly the case here with Sal’s example. That full respray has brought out the best of the brilliant Macau blue, one of the best E30 colours without question, and when the sun strikes it really comes alive. Up front there are black grilles and smoked headlights, a pair of eyebrows and a gold AC Schnitzer badge while at the rear sit MHW smoked lights and Sal has also fitted carbon roundels front and rear. It’s a subtle selection of additions but together they work really well and just give this E30 that extra bit of edge as far as looks are concerned. Inside is that very cool bubble leather interior, re-trimmed by B-Trim, iconic M Tech 2 steering wheel and trio of auxiliary gauges ahead of the gear lever displaying oil pressure, temperature and volts. The air-ride controller has been custom-mounted in the driver’s central air vent and the boot houses the single tank and compressor setup along with the JL Audio shallow-mount sub. This forms part of the upgraded audio in this car, which also includes a Pioneer head unit and Pioneer speakers. 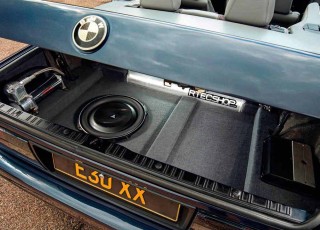 Sal and his E30 have come a long way together over the years and they have a bright future together because he has no intention of ever letting it go. “I’m going to keep it forever,” he smiles, before adding “well, unless I can get a 964 911, but I still won’t sell it, then it will go to my daughter, Dilara. She’s only three but she loves the car,” he grins and she is going to be one lucky girl when she’s old enough to drive it because by that time it’s going to have evolved even further. “I’m going to get the seats re-done again,” says Sal, “and I’m also going to get extended leather under the dash. I’m also going to gold plate the exhaust tips and the calipers as well as the air tank and compressor. I might supercharge it as well…” he muses but there’s no rush, he’s got plenty of time to get his E30 just right and all his plans are going to take it to another level altogether. We’ll never get bored of engine-swapped E30s and this one right here is the sort of car that will make people fall in love with modding, BMWs and the whole scene; it’s the kind of car that just makes you happy and we love it.

THANKS Big thanks to G.N.R Motors 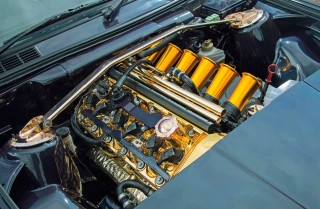 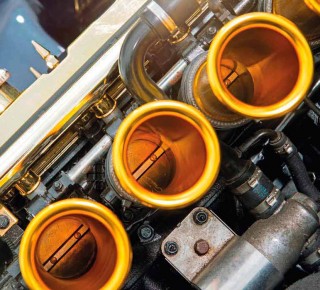