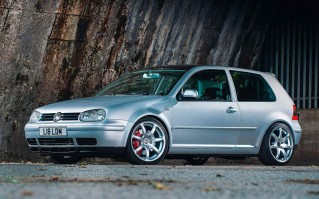 This stock-body VR6 4Motion gives away few clues as to the mighty power hiding beneath. But with the addition of a turbo and a lot of elbow grease, this Golf’s thrust more than justifies the smattering of sneaky supercar embellishments… Words: Daniel Bevis. Photos: Ade Brannan.

It may seem unlikely to the kids of today, but turbocharging used to be a mysterious and aspirational thing. The road cars that pioneered the everyman turbo – the BMW 2002, the Oldsmobile Jetfire, the Chevrolet Corvair Monza – were almost wilfully scary, lulling you into a misguided sense of ease with their yawning chasms of turbo lag before suddenly coming on boost mid-corner and forcing you to wrestle extravagantly with the wheel to save yourself from spearing off through a hedge. And when turbos started to find their way onto hot hatches in the 1980s and ’90s, more or less directly influenced by the hard-boosted insanity-whistles of the Group B era and the necessary homologation situation thereof, it was very exciting indeed for young petrolheads. ‘Turbo’ was a badge to wear proudly on your car – ideally as large as possible. 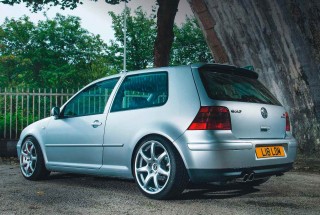 It almost sounds far-fetched in an era when so, so many new cars are turbocharged, and the technology is feted as something sensible, something to increase efficiency and reduce CO2 emissions, but a couple of decades ago ‘turbo’ was synonymous with ‘cool’. It symbolised bravery (in that they were temperamental and could grenade your engine without a moment’s hesitation), thickness of wallet (to pay for all the rebuilds and the insurance) and, most of all, thrust. It was a thrilling, glowing Pandora’s Box bolted on to unleash the inner potential of internal combustion via some kind of voodoo.

Thankfully, for people like us, turbos are still cool. And what’s coolest of all is sneaking them into unexpected places… like, for example, the Mk4 Golf 4Motion. Now, this has long been one of our favourite variants of the Mk4 platform, as it’s a bit of a hidden gem – that subtle boot badge may not mean anything to the average passer-by, but we know that it means all-wheel drive and a 2.8-litre VR6, which is a pretty decent spec for a Golf in anybody’s book. What Lewis Mewse has done here, then, is to take the stealthy essence of the four-mo, stir in the ages-old reverence and mystery of turbocharging, and combine the two to create the ultimate weapon of surprise.

Indeed, surprise really is this Golf’s trump card, and it plays it aggressively and with impeccable timing. You see, most people wouldn’t give this car a second look when they saw it rolling down the high street – to the uninitiated, it’s just an old Golf in an anonymous colour, nothing out of the ordinary. But the spirit of the supercar is rich in this one, and a few choice details can’t help but bleed out into the visionscape of those who know what they’re looking for. Aicionados will immediately have their interest piqued by the 4Motion badge, as that’s something to be admired. The standard arches house wider wheels in an eighteen-inch diameter, although that’s a pretty common upgrade… but as the car comes to a standstill, you notice that they’re 18" Spider alloys from a TVR Tuscan. Intriguing. And peeping through the spokes at the front, an amusing greatest-hits counterpoint to the TVR centre caps, you spy the Porsche legend emblazoned upon mighty six-pot calipers so large they essentially cover half the disc. There’s clearly mischief afoot here.

What Lewis has is a strong, reliable, proven VRT making big power but also happy to run daily 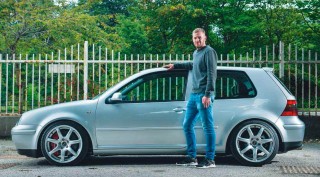 Catch Lewis filling up at the petrol station and you’ll spot the Bentley badge on his filler cap too, although that’s just for kicks. The bottom line is that this is a period-perfect sleeper with a supercar heart. In fact, with 443bhp to play with, it’s just as powerful as some really quite formidable machinery that was new on the forecourts at the same time as the Mk4 Golf was – the Porsche 911 Turbo S, Ferrari 456M, Aston Martin Vanquish… this 4Motion is in good company. And yet it slithers under the radar like a buttered python.

“I bought this Golf in December 2012 as my everyday car,” Lewis recalls. “It was a standard 2.8 4Motion, which I came across after months of searching for one. I finally found this one on my local Gumtree, and it just happened to be the same car I’d seen earlier in the day when posting flyers. I went to view it that evening and landed up buying it there and then for £2000. The first thing I did was to fit the BBS Anniversary alloys that I had from my previous Mk4 Golf, and I used the car daily for the next two years.”

The suspension and exhaust were upgraded during this time, nothing seismic, but a change in fortunes occurred in 2014 which went on to dictate a fresh new direction for the Golf. Lewis took the car to get the stock ECU remapped, but unfortunately things didn’t quite go to plan. Getting the car home, he decided to carry out what he describes as ‘a quick turbo build’ (but of course, as you do). Things sort of spiralled from there.

“For something that was meant to be a quick build, it actually took up most of my weekends,” he laughs, and it wasn’t until 2016 that the car was ready for finalisation and mapping at Storm Developments in Reading. How so? Because Lewis wanted to do this properly, that’s how. 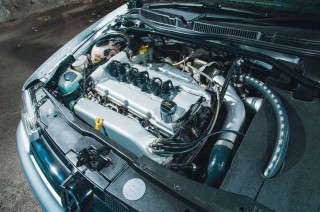 The Golf was retired from daily duties so he could concentrate on the engine build, and the spec today is really quite formidable. We’re looking at a custom-upgraded Garrett GTX 35-76 ball-bearing turbo, 630cc injectors and RS3 fuel pump, Forge intercooler (one of the few visual clues outside the car that something out of the ordinary’s going on), ARP rod bolts, ITG induction, and a whole lot of strengthening, bulletproofing and bushing to make the VR6 as strong as possible to take the boost.

“Storm Developments provided the Syvecs ECU and took care of the mapping,” says Lewis. “Andy at Storm gave me good advice throughout the build; most of it was carried out by myself, with help from a few friends; Les Dawson from Volkswagen did the head work. We had some issues with the 044 fuel pump I was originally running, but Andy replaced it with an RS3 pump when it was getting mapped; we also had problems with the running on idle sometimes after the map, and as Storm Developments is over six-hundred miles away it ended up getting transported back… but it was as simple as the fuel regulator and tweaking on the map to make sure it was running 100%.” So now what Lewis has got himself is a strong, reliable, proven VRT making big power but also happy to run daily, idle cleanly, and generally behave like it was always meant to be this way. This is testament to his skills, as well as the expertise of Storm, and it certainly ticks a lot of boxes on the power wishlist.

“Having modified cars since I was seventeen, I had a good knowledge of mechanical work - although I did learn a lot more on this build,” he says. “Most of my previous cars were Vauxhalls, Hondas and Fords, so I was fairly new to the Volkswagen scene.” Suffice it to say that he’s jumped in with both feet, and the results really are remarkable. Lewis has been careful to keep the exterior of the car looking as close to a stock 4Motion as possible, giving just a few choice clues to those who know what they’re looking for, while the bubbling undercurrents of thrust hiding beneath the skin give him more than enough entertainment to keep a smile plastered across his face.

As the car comes to a standstill, you notice that they’re 18" Spider alloys from a TVR Tuscan

“I’m just enjoying driving it whenever I can, after the long build,” he beams. “There’s always something more to do, though; it’ll soon be having a full body respray by Fleep Greig at Kirkton Motor Body Repairs, and I’m also looking into getting rear diff work done. Never finished, are they?” Sure, that’s indisputably true, but the bulk of the hard work is done here: after years of careful and methodical work, Lewis has a stealthy 4Motion with all sorts of power hidden inside. And very few people suspect a thing. 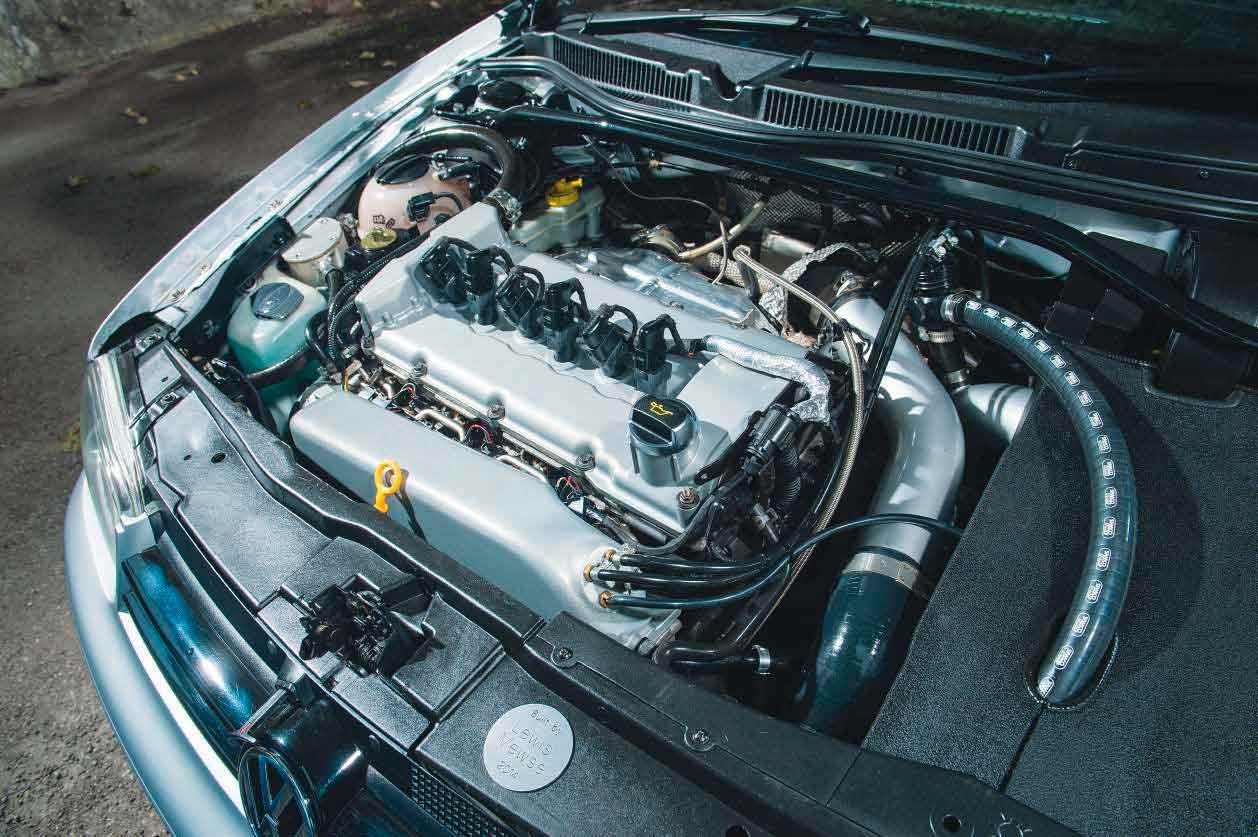 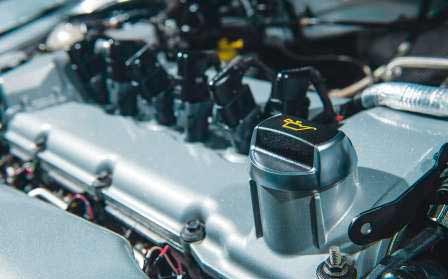 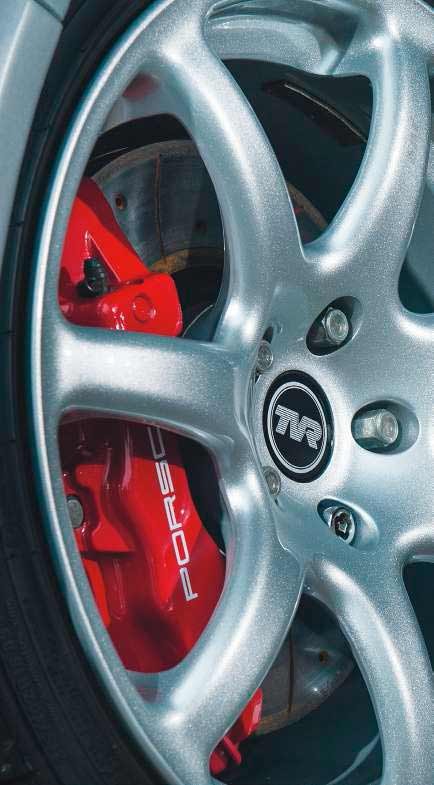 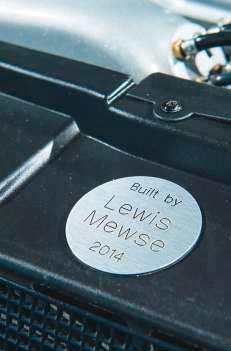 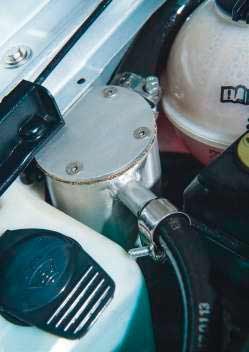 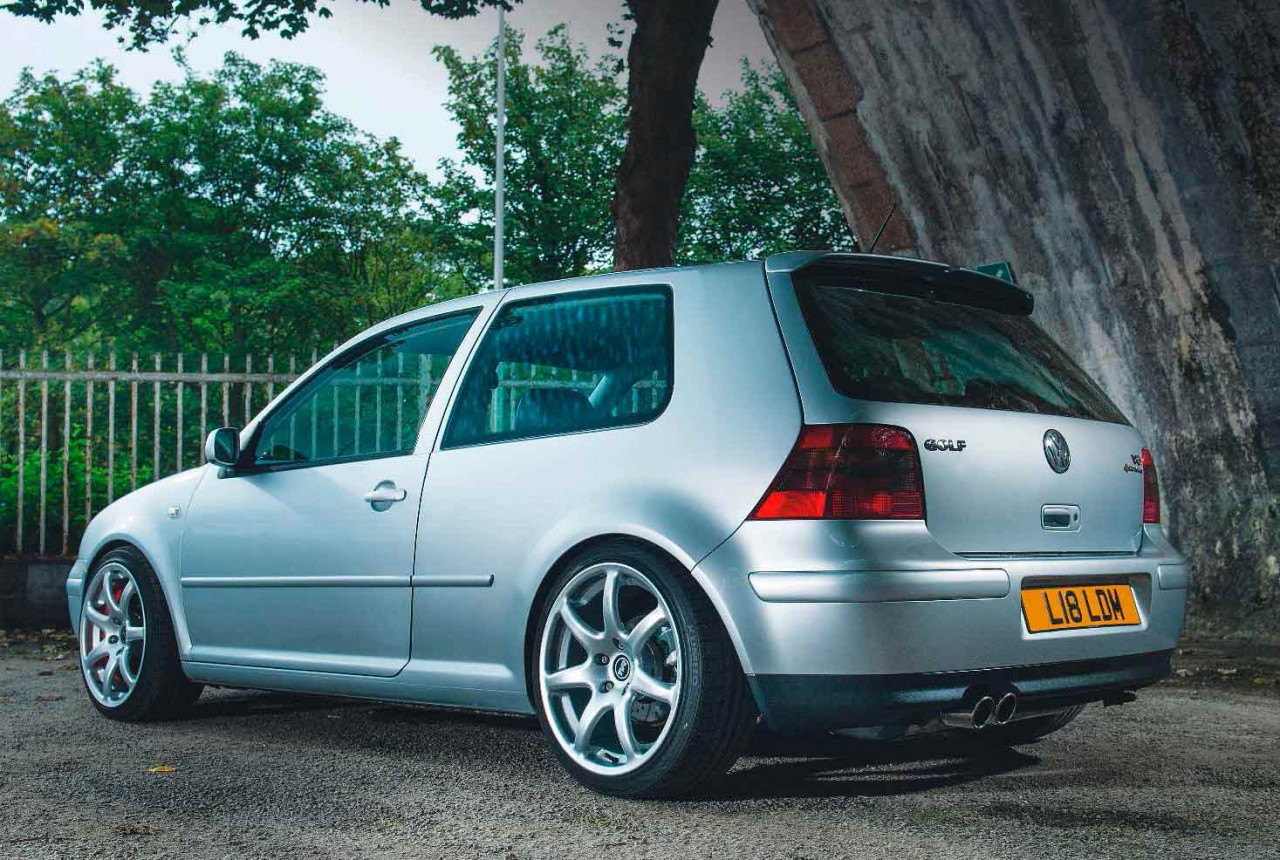 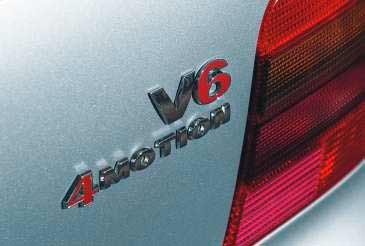 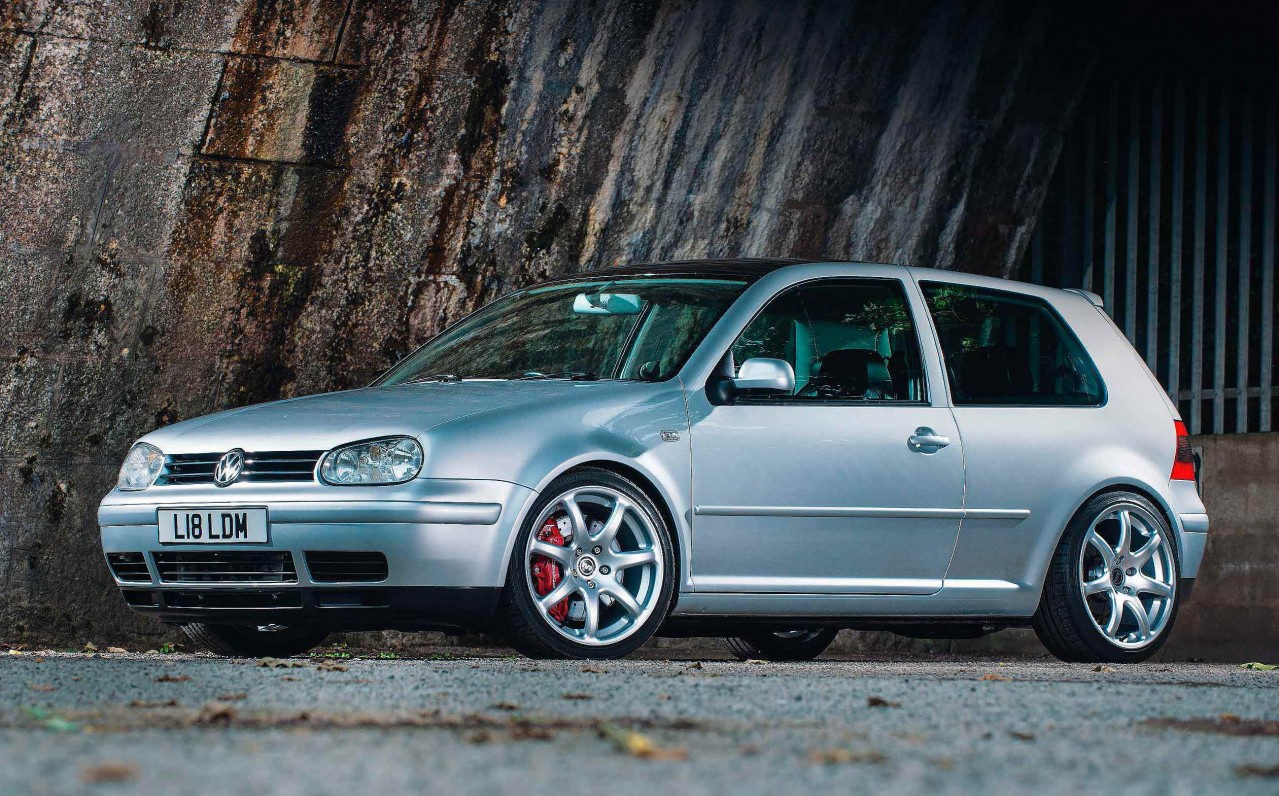 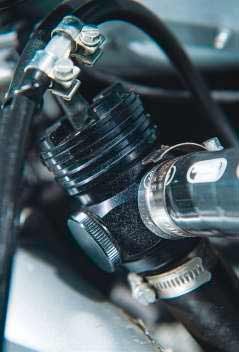 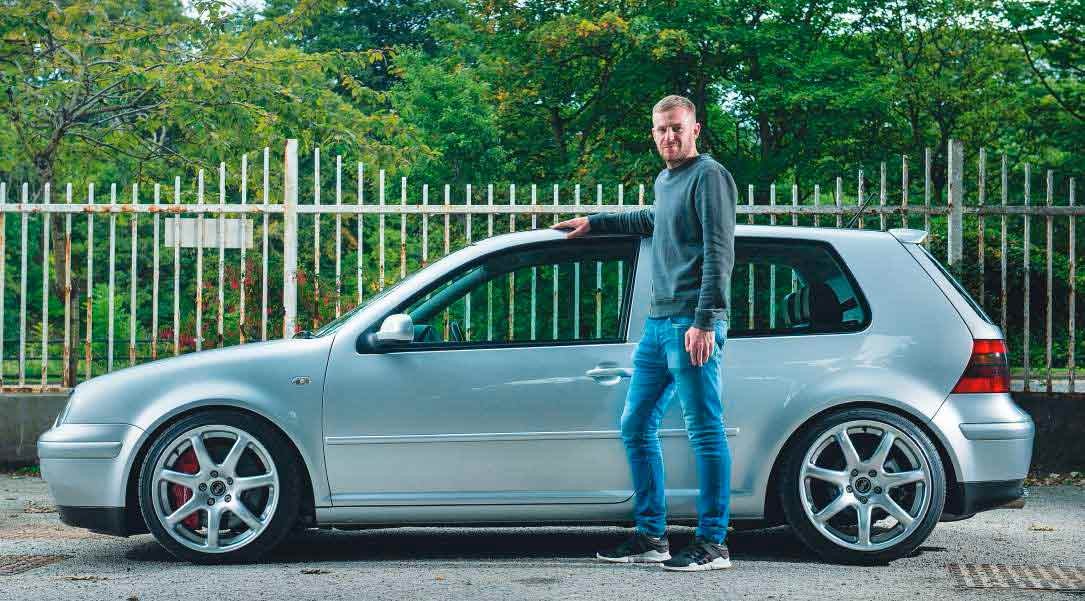 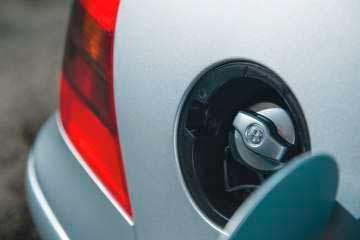 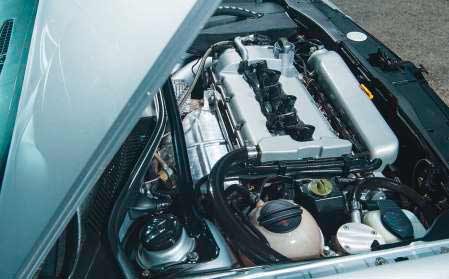 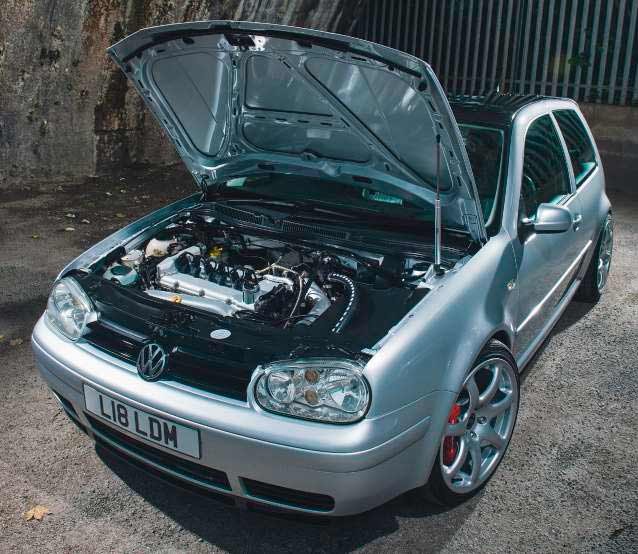 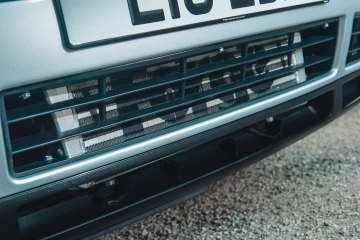 With 443bhp on tap the car now has over three times the power it originally left the Wolfburg factory with.