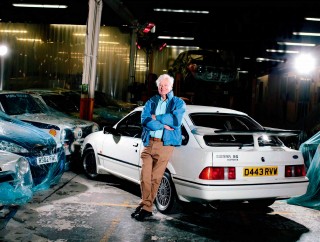 Ford’s Total Performance initiative transformed the company’s lacklustre image in the 1960s, thanks to the GT40, NASCAR and a range of saloons that was hugely successful in racing and rallying alike. Two decades later, the company was still determined that its sporting side should come to the fore, which is where Special Vehicle Engineering came in.

When the marque found itself in need of a Group A contender, director of motorsport Stuart Turner went searching for an answer. One solution presented itself in 1983, when Turner went with Ed Blanch and Jim Capolongo – chairman and vice president, respectively, of Ford Europe – to meet Cosworth’s Keith Duckworth. They happened to pass a (strategically placed) 2-litre Pinto engine fitted with a dual-overhead-camshaft cylinder head, Duckworth explaining that it was a private kit the company was planning on marketing. 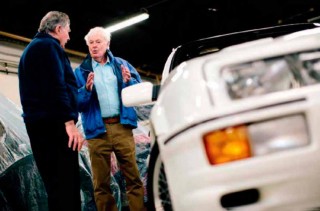 Could a fire-breathing Sierra provide the solution that Ford desperately needed? Going from blue-sky notion to production-line reality took a lot of effort from all involved. It helped that Ford of Britain’s chairman, Sam Toy, was on board from the outset, especially when Turner declared that it would do for Ford what the Lotus Cortina had done in the 1960s. While the Total Performance slogan may have been long gone, its essence was still very much alive.

“I started my career with Ford as a development engineer in 1960,” says Rod Mansfield, the first head of SVE. “In my spare time I raced an Austin A35 van, then a Ford Anglia, a Cortina and on to an Escort. That did me no harm at all when I started campaigning to join Advanced Vehicle Operations [AVO] in 1970, and I was appointed Supervisor of Engineering.”

That famous organisation closed in 1975, and it was a number of years before a replacement was considered: “I never knew there was even going to be a department called SVE until I received a telephone call from Gerhard Hartwig, head of Vehicle Engineering in Germany, on 1 February 1980. He asked if I would take charge of this new facility. Later, I wasn’t surprised to learn that it was Walter Hayes and Bob Lutz who had requested the programme through the company’s Product Vehicle Development. Ford’s range was seen as pretty dull – BMW’s line-up was considered far more sporting.”

Several factors, however, would set SVE apart from AVO. Importantly, it was to be entirely based within Ford’s engineering organisation, while all SVE vehicles would be assembled on the company’s own production lines. 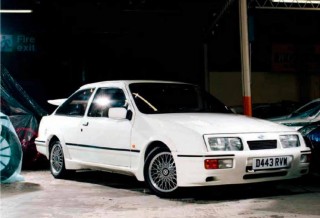 “Our first programme was the injected Capri,” recalls Mansfield. “The model was dying in the market place. I knew that Michael Kranefuss, who headed Ford of Germany’s Motorsport Division, was driving a fire-engine-red Capri fitted with a 2.8 injection engine, lowered suspension, wide wheels and so on. One of the German Motorsport Capris was transferred to us and that specification became our template for the SVE version. The Capri was quickly followed by the XR2 and the XR3i as Ford’s planners grasped the benefit of our skills.

“A major part of my role with the SVE Sierra was to ensure that it could be used for shopping and the school run. We were responsible to the showroom buyers, not the few who used the Cosworth for racing. There was no opportunity for giving the car excuses. It was to be homologated under Group A, which determined that at least 5000 examples had to be built.

“We’d already dealt with Keith Duckworth over the BDA engine for the Escort RS1600. For the Sierra Cosworth, we explained that we wanted 200bhp from the production 2-litre engine. In reply, Keith advised us that, with the twin-cam turbocharged configuration, he didn’t know if he could limit the power to that level. In fact, some of the press cars did come through with rather more than that…”

Since the external dimensions of the Cosworth engine are identical to the basic 2-litre version, the power unit fits neatly into the Sierra’s engine bay. “There were still serious engineering challenges for us,” remembers Mansfield. “One example was the intercooler packaging. It takes up a lot of space and had to be mounted in front of the engine to be in line with the air stream from the grille aperture.” 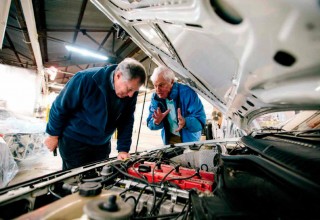 Another hurdle was the turbocharger: “Keith designed a lovely four-into-two exhaust manifold, but together with the turbocharger it formed a huge mass that gave off considerable heat. Also, there was a bad resonance period at around 4000rpm. We solved that by designing a mounting that comprised a couple of friction washers and a spring. Obviously, it was affected by heat and had to be regularly changed.

“Later, we redesigned the whole exhaust manifold and turbocharger unit for the Sapphire 4x4 programme. That didn’t resonate and was much more civilised.”

Ride and handling were other areas that received considerable development: “Mick Kelly and John Hitchins were put in charge of that, lowering the ride height, changing the spring rates, increasing the roll-bar thickness and altering the geometry settings plus the angle of the front struts to desensitise the steering. The car was then taken to Ford’s test track at Lommel, Belgium, for evaluation.”

As we walk around the immaculate example that Ford keeps in its Heritage Collection, Mansfield points to the various holes that were cut in the body to reduce underbonnet temperatures and cool the brakes under high-speed use. “The discs were changed to ventilated, while we fitted 283mm units on the front,” he says. “Combined with ABS, they handled the increase in performance well. Pevis, our supplier, was very helpful and understood our objectives.” 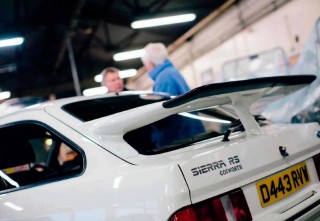 “I think we went after the extrovert look in spades,” he says with a grin, surveying the famous spoiler. “We knew that we needed to kill the rear lift that was generated by the jellymould body shape. To create the required downforce, we dispatched Gordon Prout to MIRA, where he used their wind tunnel. Working at temperatures of -4ºC and with help from the aerodynamic guys from Ford of Germany, he shaped the wing – going through a total of 92 iterations! Finally, he returned with this very basic-looking device that had been pop-riveted onto the car. It looked dreadful but it gave us the downforce we needed.”

For the spoiler to have the greatest effect, it had to be positioned as far back as possible. Ideally, it would have been another 6in further rearwards, but this would have required a very expensive additional bumper to remain legal. “We always garnered help from whomever we could,” says Mansfield. “John Miles was a great friend of mine, and he estimated that the final spoiler would result in a two-second benefit around Silverstone. In fact, it showed an improvement of two and a half seconds.”

Eventually, the time came for Mansfield to ask the design team to produce the final spoiler: “Inevitably, they said: ‘Not you again…’ as I explained what we needed. Of course, they worked their magic and what they produced did the job fabulously. They were also responsible for designing the sideskirts, which looked great.” “It reminds me of just how standard-Sierra everything looks,” he remarks as we survey the Cosworth’s interior. “Only the addition of the turbo boost gauge suggests that this is anything different to a less-powerful version. 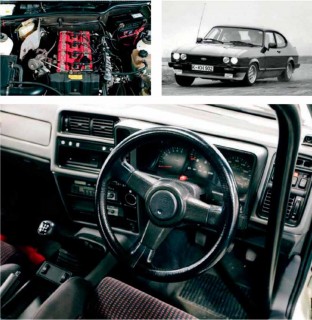 “To have fitted a more upmarket interior would have been very costly. Introducing different trim would have involved a raft of crash tests on each component. The Recaro bucket seats and leather-rimmed steering wheel were things that we could fit within reasonable purse strings. And we had the RS branding to call on as well.

“In the beginning, Ford’s hierarchy was still a little reserved about its looks. Fast-forward to when the car was winning races, though, and it was clear to see our involvement and what we’d achieved.

“Even when driving the prototypes, there was always the ‘bloody hell’ moment when the car’s performance really sank in. It had that kind of effect. While he was in Italy, Paul Burton, one of my team, used a Cosworth development car to take the chief engineer of Magneti Marelli to lunch. He asked if he could drive it back, only to be stopped by the police. They just wanted to look under the bonnet to see what enabled a Sierra to out-drag their Alfa Romeo.”

Ford Motorsport later contracted Tickford to convert 500 RS Cosworths into RS500s: “The major differences were a cylinder block with thicker walls, a Garrett T04 turbocharger and an uprated intercooler. There were multi-fuel injectors with a redesigned induction system and an uprated oil and cooling system. To tell it apart from the standard Cosworth, it was given cosmetic changes to the spoiler, a re-shaped front air-dam and RS500 body decals.”

Then came the four-wheel-drive programme: “At AVO, we’d already worked extensively with Stuart and Tony Rolt of Ferguson Formula in developing the 4x4 Capri. Before SVE had even completed the Cosworth, Bob Lutz wanted a three-door Sierra concept to be built with four-wheel drive as an answer to the Audi quattro.

It had to be drivable by the press and would be exhibited on the Ford stand at the Frankfurt show.

“It was quite a tight programme, even for us, though because it was a prototype we could cut the bodyshell to install the bulkier drive-train.

Bob drove it and was so impressed he withdrew it from the show because he wanted it developed into a production vehicle. A plan was created and it became the XR4x4. The Sapphire was then an obvious follow-on to the rear-drive model.” 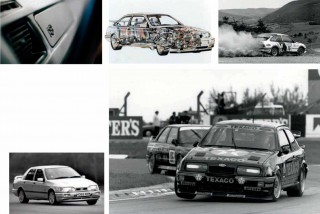 But would Mansfield change anything were he to start again? “I’d apply the same principles, which is bound up in not modifying things that cost a lot to change,” he replies. “Customers might like to have an interior that sets it aside from lesser models, but I’m sure we’d come up against the same problems: cost and time. After all, it would only ever be a limited-build model.”

He pauses, then adds: “Actually, there is something I’d alter. I’d change the door locks, which were common to lesser models. The RS Cosworth was such an easy car to steal.”

Thanks to The Ford Heritage Collection

‘IN THE BEGINNING, FORD’S HIERARCHY WAS A BIT RESERVED ABOUT THE STYLING’

Mansfield with Ford’s own Cosworth. Left: next up for SVE was the fourdoor Sapphire variant.

Clockwise, from right: the twin-cam, turbocharged powerplant gave well over 500bhp in full-on Group A RS500 form; Mansfield talks Taylor through its finer points; his first SVE project was the injected Capri III; underwhelming interior was a result of cost considerations.

Clockwise, from above: the signature rear wing was developed in MIRA’s wind tunnel; the Cosworth was an effective rally weapon – here with the late, great Colin McRae; Silverstone ETCC, 1988, when RS500s filled the top six positions; cutaway shows the road car’s mechanical layout.