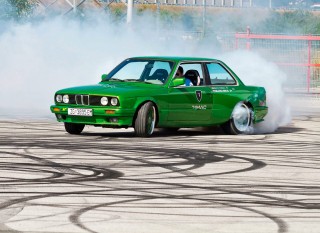 Mate Rimac is not like you or I. Obviously you and I don’t own our own car company, of course, but that’s not the kind I of difference I’m talking about. What I’m referring to is Mate’s approach to modifying his BMW, and how it differs from ours. You see, if we were ever to suffer the misfortune of our BMW’s engine blowing up we would consider the following options and nothing else. Option one: rebuild current engine, preferably with upgrades. Option two: replace current engine with newer, more reliable and more powerful version. Option three: replace current engine with that of another manufacturer’s. Option four: replace whole car.

A fifth option would probably not even enter our minds. Yet for Mate, option five was the most appealing one available to him and, in theory if not quite in practice, even the most rational one. Option five, of course, was to replace the broken internal combustion engine with an electric motor and batteries. Now, electric cars have been around a long time (the first motorised London taxis of 1897 were powered by electricity, don’t you know), but that is still some unconventional thinking right there.

And here we have the result of that thinking. A 1150kg electric E30 with the equivalent of 600hp and 664lb ft of torque that will do 0-62mph in 3.3 seconds, a quarter-mile in 11.3 seconds and go on to 174mph flat-out. Okay, the range is only 112 miles between charges (those taking from eight hours using a conventional wall socket to 30 minutes using a three-phase high-current outlet). But how many miles do most highly modified 600hp cars get driven in one sitting? 112 miles in something this potent and uncompromising seems enough to me. 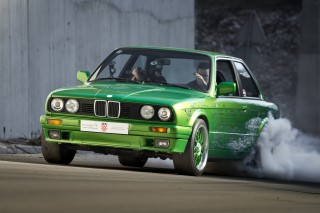 Not only is there a majorly impressive car as a result of Mate’s exercise, there is also now a car company, based in his home country of Croatia. Called Rimac Automobili, it produces the Concept_One electric supercar that, dressed in a far more appropriately sleek and sexy body, is an altogether higher quality, more luxurious yet faster and even more exciting proposition than the e-M3. At the time of writing, Rimac was just weeks away from delivering the first car to a customer.

When during a race the petrol engine in his E30 blew up [about a year after he bought the car], he decided to start making his dream come true - making an electric sports car. He knew that the electric motor is a much better machine for propelling a car compared to an ICE engine.” And this is despite the fact that he hadn’t even driven an electric car before. Perhaps it is this difference in approach, and a lack of vision on our part, that is the reason why we don’t own a company that produces its own cars and Mate does. Probably. 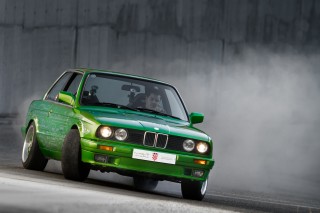 The 1984 323i was Mate’s first. BMW (though he’s owned an 320i E46 Convertible, M6 Convertible and X6 35d since). The E30 had been prepared and used for drifting before Mate bought it in 2007, and he later modified it further by fitting a tweaked M20B25 from an E32, but other than that it was a totally unexceptional E30 before the electric tuning extravaganza began. The goal from the beginning was to create a very powerful car, according to Mate. First he started on his own, reading and researching about other people’s projects who had already converted cars to EVs (Electric Vehicles, for those of you who have tried to ignore this kind of witchcraft until now), some of whom who had used them for racing. Then he ordered the required parts and started to build the car in his garage, and after a year or so the car was drivable.

Drivable but not that impressive. Mate wasn’t satisfied with the result. “It was heavy, not very powerful and the range was very limited,” he said of the car later on. At the time, though, he was still just “a guy in his garage - no company, no team”, so to move the project on he started to bring together a group of experts to develop his own components. Why did he persevere even after the disappointment of that first attempt? “I believed that the electric propulsion could give much more compared to what was available on the market.”

It has been a long process to get the e-M3 to where it is now, with the car having gone through five guises, each time the power electronics, motors and battery packs being replaced with more compact, lighter, yet more powerful versions. “Mate (and Rimac Automobili later as a company) replaced the powertrain and upgraded it five times with the latest developments,” reveals Monika. “In the first setup the car still had its original gearbox and differential. Mate soon figured out that those components couldn’t keep up with the power and torque of the electric motors - we lost several gearboxes, clutches and differentials during races - and started to eliminate those components. Already in the second generation, a direct-drive configuration [where the motor is directly connected to the propshaft] was implemented and a custom-made differential installed. Then the driveshafts started to break and suspension to bend... there aren’t many parts that have been untouched.”

And all this from a company that had zero experience in electric propulsion, and that is based in a country with a smaller car industry than that of the small UK town of Malvern (that’ll be Morgan). “There is no car industry in Croatia," confirms Monika. “We all had to learn a lot. No one in our team had previous electric car experience and it was a long try- and-fail process.”

I ask whether the E30 has at least been a reasonable base to work from, and if there were aspects of it that suited the conversion, knowing full well what the answer would be and only asking in the vain hope that there might have been a pleasant surprise. “Honestly, the E30 was chosen simply for budget reasons - or the lack of,” says Monika, not surprising anyone. “Mate loved BMWs but this old E30 which was already used as a drift car by two drivers was not really the best choice: he lost almost a year to get the base car into an acceptable condition. He considered a Mazda RX-8, E46, Audi A4, Attack K1 and some others as the donors, but in the end he stuck to the E30 because he already had it.” In a similar line of questioning, I ask whether there are any standard BMW components - or at least off-the-shelf modifications - on the car. Again, the answer is as expected. “Only the body,” says Monika. Unfortunately for company policy reasons Rimac cannot go into the technical details of the BMW and its precise stages of evolution, but suffice to say it’s complicated under that standard-looking if brightly-coloured body. 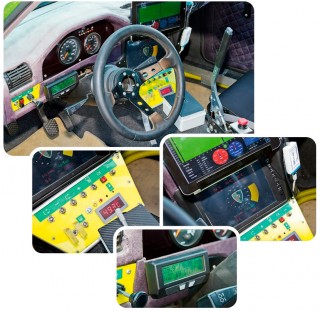 However, there can’t be any regrets about the choice of car at all. One reason for this is that because there was so little left of the BMW, it motivated Mate to build a car from scratch, and that’s why the Concept_One exists. The other reason is that, well, the concept of an old E30 containing such advanced technology is a totally brilliant one. “Now it’s kind of cool to have this future technology in such an old and iconic car,” confirms Monika. “Isn’t it funny that a 28-year-old BMW holds five world records for electric cars?”

And what are those records? Well, in the FLA’s Category A, Group VIII (electric vehicles), Class 3 (over 1000kg), the e-M3 holds the world record for one-eighth of a mile (7.549secs), quarter-mile (11.808), half-kilometre (13.714), one-kilometre (23.260) and one-mile (35.347). That took place on a two-kilometre runway near Zagreb back in April 2011, although the records have only been allowed to be published recently However, things have moved on and Mate reckons the pre-production Concept_One can beat the e-M3 easily. And it’s not as if the older car has been resting on its laurels with batteries drained...

The E30 is still being used, both hard and regularly, for the purpose of further research and development and it’s now being transformed into its sixth evolution. “It’s being uprated all the time,” says Monika. “Even right now our engineers are working on it. It’s being used every day; employees use it simply as a normal car - going to work, visiting suppliers, going for lunch - and also for the testing of new components. Everyone in the company is driving it.”

And soon it will be more than just Rimac employees driving its vehicles, with the first, ground-breaking car of Rimac’s having been delivered to the first customer this year. It’s a brilliant success story for a company that started from such humble beginnings, and one you’d do well to remember when the M10 in your 1987 316i lets go... 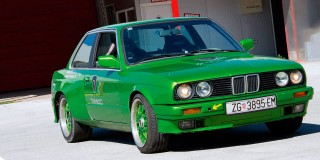 Stunning Rimac Concept. One is the result of all the development work with the E30 and it went on sale this year.

Elizabeth
This comment was minimized by the moderator on the site

Elizabeth
There are no comments posted here yet