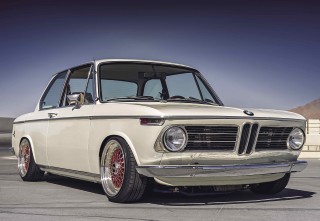 Retro Rocket Turbo M20 2002. Under the pristine Chamonix white paintwork of this stunning 2002 sits a turbocharged 2.7 M20 that has turned it into a proper performance classic. Words: Elizabeth de Latour Photos: Viktor Benyi.

Over the years BMW has produced a number of engines that, while very nice when new, have over time become performance heroes for various reasons; these include turbo-friendly motors like the M30, M50 and the sturdy M20, especially in 2.5-litre form. In stock form the M20B25 is a fine engine – it’s got decent power, plenty of torque and a great old-school BMW six-pot soundtrack that is synonymous with the E30. But people soon realised it was the perfect candidate for forced induction; the M20 loves a turbo and if you’re building a compact classic it’s a killer combo to have under your bonnet. 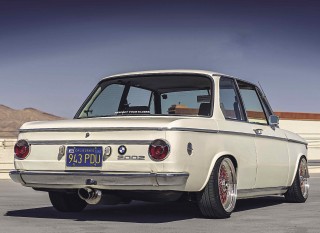 Case in point, Tony Adzhemyan’s 2002; what started out as a carb-fed classic has been transformed with the addition of a turbo M20 under the bonnet, though that was never actually his plan… “BMWs overall are just great-looking cars and drive so well, it was love at first sight,” he says as we discuss his passion for Bavarian motoring and there’s definitely a lot of love there, with Tony owning no less than five BMs in total. They include an R1200 motorbike (“Like the one in the James Bond movie”), an 840Ci and another 2002, which is clearly just being greedy, but it was the 2002 that is responsible for his BMW obsession so it’s no surprise that it holds a special place in his heart. “My first BMW was the 2002, it’s just a good-looking car overall and easy to modify. A few friends have 2002s which I worked on, from adding dual Webers to basic stock carbs,” he says but his own build was destined to have something a little more special under the bonnet. “I didn’t pick the car, the car picked me,” he smiles, gesturing to his splendid white 2002. “The car came from a friend; it needed way too much for him to take on so he sold it to me as a shell with a few odd parts. My plan was to get it in running condition just to drive it,” he says but, as you can see, the project has gone far beyond that.

“I started with getting the stock motor running. Once I’d got it going I modified it with carbs and a few other bits until it started to smoke badly, so it was time for a rebuild,” Tony explains. “While shopping around for a good deal, I ran across a friend that did an engine swap in his E30 leaving his M20 parts up for sale, so I pretty much decided then that I wanted to do an M20 swap; I bought all the parts from my friend and the process began. It started out as a stock motor but I kinda felt it needed a little more…” he says. “That’s when I started collecting parts for a turbo conversion – I got all the parts and eventually got the stock motor running a turbo until I blew that up. After that it became a full rebuild from body paint to motor,” he says and that explains just why this car looks as stunning as it does. This might be a turbo M20-powered 2002, but there’s so much more to this build than just the engine. 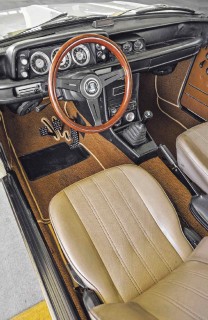 First things first, you’re not looking at a regular M20 here, oh no, what Tony is running is called a Super Eta; here in the UK we got the 2.7 Eta M20 in the E28 525e (called the 528e in the States) while in the US it was also fitted to the E30 325e, with the ‘e’ standing for economy and it was a low-revving version of the M20 designed for lots of low-end torque and improved fuel economy. However, with some tweaks the larger capacity straight-six can be turned into a bit of a performance motor and the Super Eta was the name given to the uprated version of the engine that was introduced in 1987, which added a lower compression ratio and higher redline for more power, and this is the engine that Tony is running. “The engine is a stock Super Eta block with full ARP bolts all-round, new bearings and rings. The 885 model head has been ported and polished and fitted with oversized intake and exhaust valves, heavy duty rockers, upgraded valve springs and a BimmerHeads dual pattern cam,” explains Tony, which makes for a seriously impressive build and that’s before we even get onto the actual forced induction components. The turbo is a Holset HX35, which can handle up to 500hp, and it sits on a Good & Tight exhaust manifold, with a custom mandrel-bent 3” turbo-back exhaust built by Tony himself, while a Sheepey Built intercooler handles the cooling duties. The swap itself is supertidy, with the bay having been cleaned-up, and the distinctive red intake manifold adds a welcome flash of colour that contrasts perfectly against that pristine white paint. It’s a mighty motor, one that gives this 2002 some serious performance and makes it quite the sleeper.

With the bigger, heavier M20 on board and turbocharged power to deal with, the 2002’s chassis needed some significant upgrades and Tony has put in a lot of work to make sure that the car is capable of coping with all that performance. “The suspension is all custom to the car,” he explains. “The front struts were cut and welded shorter using re-valved Mk1 Bilstein shocks, coilover collars were welded-in with Eibach springs while at the rear are Eibach springs with adjustable spring perches. The chassis has a few modified braces going across it for less body flex while the rear subframe is modded to accept a much larger differential to handle the extra power, with a 3.25 LSD and heavy-duty axles.

I’ve also added front and rear heavy antiroll bars along with front and rear strut braces under the hood and trunk. I chose this setup for my particular driving style – stiffer springs for better handling and cornering ability and to help stop the rear end of the car from squatting onto the ground every time I step on the go pedal,” he grins. Beyond the custom suspension setup, Tony has also added a Wilwood BBK with four-pot calipers up front and single piston calipers at the rear, which gives this 2002 a significant upgrade in stopping power, and then there are the wheels. 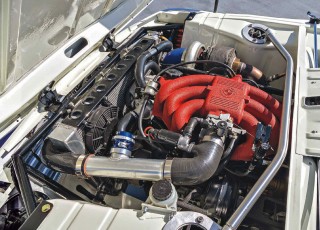 Unsurprisingly Tony has opted for a set of RSs, because there’s pretty much no wheel as perfect as the ultimate classic BBS for this classic BMW. They measure 7x16” all-round and the custom finish on them is just stunning – the polished lips and gold hardware are a great combination but the faces are just gorgeous, with the outer portion of the intricate cross-spoke pattern having been left unpainted while the inner areas have been painted candy red and the attention to detail and the extra visual dimension that this adds is just fantastic.

With the 2002 being as good-looking as it is, most owners don’t do much in terms of exterior styling additions and that’s the case here; “The styling of the car kinda grew on me as I went further with the car, but I also kind of wanted to keep the sleeper look and not give away what was under the hood so I wanted to keep the car stock-looking from outside,” says Tony and we don’t blame him. With a fresh set of chrome mouldings and a fresh coat of Chamonix white paint, this 2002 is looking seriously fresh and to mess around with those classic lines would have felt like sacrilege. With the generous drop delivered by the custom suspension setup and those stunning red RSs, this 2002 is just so gorgeous and it’s really classic perfection. 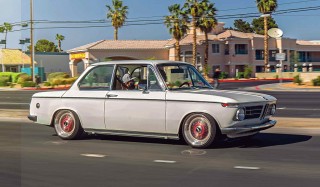 The inside has received a little more work than the outside but Tony’s plan was to still keep things looking as period as possible; “I did all the interior stuff myself.

I wanted to keep the stock original look and yet comfy,” he explains. “I always loved the tobacco brown colour interior BMW did for the 2002, which I carried out in the door panels and carpet. The seats are Comfort seats out of an E30 – I didn’t want something too sporty-looking but also comfortable for long drives so I fitted this set of tan E30 seats which give it an original BMW look,” Tony explains and we can totally see the appeal. The combo of tobacco door panels and carpets with the tan leather seats is great and it actually works really well with the white exterior, giving the car a sort of coffee and cream vibe, while the wooden Nardi steering wheel is the perfect finishing touch. Tony’s 2002 is just a stunning machine – it looks absolutely perfect, such a wonderful classic and we love the fact that he’s kept the exterior so pristine and just used the drop and those intricately-finished wheels to deliver all the styling upgrades it needed. But the star of the show is without doubt that engine and it’s a big build with an impressive spec that really sets this car apart; “I would honestly have to say the motor is my favourite mod on the car,” grins Tony. “Driving the car and getting a bunch of thumps is really cool, but when that one car pulls up next to you and thinks they are fast, I just downshift and just blow their doors right off, which most of the time catches them unexpectedly. It’s not every day you see an old car just squat and jump once the pedal hits the floor!” he laughs and he’s not wrong. 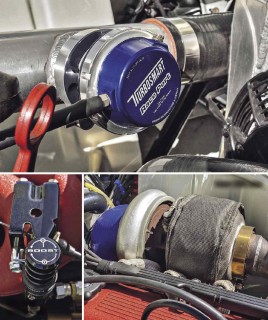 This is a proper little sleeper packing some serious power and while it hasn’t been a quick, easy build, taking as it did 10 years to complete, the end result was more than worth all of that time and effort. While Tony admits there are likely to be some more mods on the horizon (“Customs are never-ending projects”), for the time being this build is finished and all that’s left to do is maintain and enjoy it, something that comes very easily when you own a turbo 2002.

“The turbo is a Holset HX35, which can handle up to 500hp, and it sits on a Good & Tight exhaust manifold, with a custom mandrel-bent 3” turbo-back exhaust”

THANKS Thanks to BimmerHeads for building my motor, Sheepey Built for my custom intercooler, Pure Turbos for the turbo parts, and most importantly all my friends who helped me out when I needed a hand

“The suspension is all custom to the car. The front struts were cut and welded shorter using re-valved Mk1 Bilstein shocks, coilover collars were welded-in with Eibach springs” 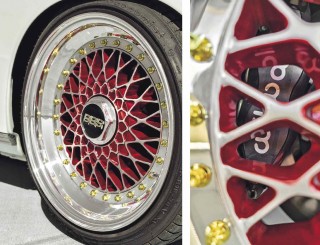