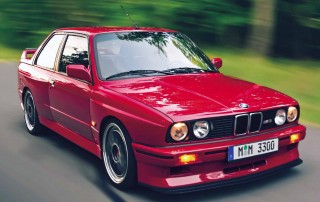 We cram all of the most important facts about the mighty E30 M3 into a guide you can read in the time it takes to make and drink a cup of tea (or coffee)! Words: Elizabeth de Latour Photos: Tony Lopez.

If you've been inspired by our awesome E30 M3 cover car and fancy a go yourself (though perhaps not at the S55 swap bit) then our compact little guide is a great place to start. There's enough info out there about the E30 M3 to fill several books (and there are more than several books about the E30 M3) but it can all be a bit overwhelming so we're going to trim the fat here and just leave you with the meaty facts to get your teeth into.

The E30 M3 was designed to take on and beat the best that the touring car world had to offer and while BMW’s Fives and Sixes were potential race winners their size and weight really counted against them so the new E30 3 Series was deemed to be the most suitable machine for BMW M to get its teeth into. The S14 was designed specifically for the new touring car and all that motorsport goodness filtered down into the homologated road-going version. Originally BMW planned to build 5000 E30 M3s, but such was the popularity of the car that over three times as many were actually produced from March 1986 to June 1991, with many minor changes for homologation requirements along the way. There was also the Convertible model, with 786 cars built over a four-year period; the suspension was revised to cope with the extra weight and the whole car was assembled by hand.

THE RANGE AT A GLANCE

There were eight different versions of the E30 M3 produced in total, starting with the regular E30 M3 two-door and Convertible, which came with the 2.3-litre S14 that developed between 195-215hp depending on year and presence or lack of cat. Then you had the 195hp Europa Meister, with 148 made, 200hp Evo I, the France-only Tour de Corse, Evo II with 220hp and a huge number of upgrades, the 215hp Cecotto for Europe, the UK-exclusive 215hp Ravaglia and, finally, the Sport Evo, with 238hp from its 2.5-litre engine, thinner glass, lower suspension and suede interior appointments.

E30 M3 prices haven't really moved much in any direction for a while now – they climbed fast across the board and stabilised and that's how the market stands. There's a sense that maybe values aren't quite as rock-solid as they were and top-end stuff isn't successfully commanding the stratospheric prices it once was (asking price and selling price are two very different things), but for the most part you're still going to need a thick wedge of cash to get into E30 M3 ownership. Just north of £30k will get you into a base model Euro or Japanese import, with Convertibles sitting around the £50k-mark, lower-mileage two-doors in the £60k zone, where you might also find some of the special edition models like the Europameister, and then prices just soar from there for Evos and the like.

With prices as high as they are we'd be more than happy with just a bog-standard E30 M3. Sure, we'd always be dreaming about some form of Evo, or maybe a Cecotto or Ravaglia, but we don't need one. The base version gives you the full E30 M3 driving experience and that's what ownership is all about. Certainly, an Evo is an awesome machine, but is it potentially five times better? No. And, if anything, once you get into the really expensive models, you start enjoying them less because they are now investment pieces. For £30k or so no one expects a perfect M3 – you'd expect maybe a little rust, maybe some mods, a bit of tatty trim and you don't care about any of that because you're happy to just have one and that is a car that you will love ragging on the back roads on a sunny Sunday. Perfect. Anything north of £70k is something that people are going to expect a lot more from, they're going to want lower miles, better condition everything and they're not going to be doing much in the way of driving it so every time you do you'll probably be a bit nervous about pranging your investment piece. All credit and respect to those people that really drive whatever M3 they own hard and truly enjoy it, but they're absolutely in the minority. If you want the E30 M3 experience and you really want to enjoy it, the cheapest way is without doubt the best way.

The S14 likes oil changes every 6000-7000 miles; running problems will typically result from air leaks at the inlet manifold – the blocks perish over time, not helped by the plenum chamber being quite heavy. Tappets are of the shimmed variety and should be regularly checked and re-shimmed as necessary – an excessively noisy top end will demonstrate that it’s not been done recently. Exhaust manifolds also have a tendency to blow so check that this is just a result of the studs loosening, not snapping. The S14 has a double-row duplex chain and there’s no fixed mileage when it should be replaced but the problem lies with the tensioner, which wears over time and means the chain won't be tensioned properly. On a test drive check for excessive smoke from the exhaust, particularly on the overrun, as this will indicate worn valve stem seals.

Gearbox synchros can wear but the gearbox will happily keep performing like that for a long time. Gear linkages also wear and result in sloppy changes and diffs can weep. The original 16” wheels are rare so make sure they're in good condition; an illuminated ABS light will either be caused by a sensor or the pump itself, and brake lines rust.

On the body, rust will be your biggest concern and most rust hotspots are hidden behind plastic outer panels so you need to be thorough in your search; check behind the front spoiler, the wheel arches, the front scuttle panel, the bulkhead and the inner wings. Also check the condition of the metal work around the front struts and also where the exhaust manifold almost touches the body as the heat from the exhaust can remove the protective coating on the metal and rust takes a hold.

The doors (generally at the bottom) can also be affected, sills and jacking points are often in a very poor state and the front and rear footwells can go too. Do remember to have a look at the roof panel too as sunroofs are very prone to rust. At the rear both the inner and outer rear wings rust as does the rear panel (underneath the rear bumper) and also around the number plate lights and the rear light clusters. The area around the fuel filler neck is also susceptible as is the boot floor and below the battery tray. Finally, on the inside, dashboards can crack, seat cloth is very hard to come by so repairs will be difficult and the heater matrix can fail, resulting in coolant leaking into the cabin.

Some areas of the E30 M3 are easy to mod, others less so. If you're talking wheels and suspension then you're spoilt for choice; the E30 M3 came with five-stud hubs so that means you've got a wealth of wheel options out there available for you and as far as suspension is concerned you also have countless spring, damper and coilover options available, meaning if you're just after the perfect stance or want to get your E30 M3's handling the best it can possibly be, there's something to suit your needs and your budget.

If you're looking for more power, that's where things get expensive as the S14 is a highly-strung, small-capacity engine so it's going to take some work to get more from it. You'll be looking at cams, head work to help the engine breathe, manifolds, an exhaust, chip, MAF conversion, maybe a carbon air box and Alpha N management, maybe a stroker kit if your pockets are deep enough. 275-300hp is certainly doable with enough work, so there are definitely options if you want to keep things NA. If you want real power gains then you'll be needing some forced induction in your life; there are both turbo and supercharger kits available for the S14 and both will give you some serious gains, though neither options is especially cheap.

Not cheap to buy and not without its problems, the E30 M3 is, however, a living legend and a car that will never not be ultra-desirable. Offering one of the purest driving experiences it is possible to have, it's a glorious machine and one that – should the opportunity ever arise – you should buy without giving it a second thought. You won't regret it for a moment.

Regular oil changes are the key to a happy S14 Interiors are solid but dashboards can crack Leather seats will be easier to repair than rarepatterned cloth ones. A full toolkit is a rare sight and worth a few quid. Five studs mean loads of wheel and brake options.