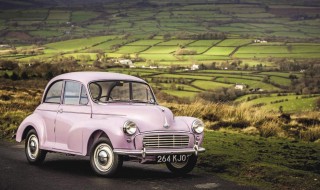 Out to Lunch. A lilac Morris 1000 – how could such madness have come about? Blame a boozy midday meal, says Jon Pressnell, as he reveals the true story behind the unmissable Minor Million. Photography. Tony Baker/BMIHT.

Morris Minor Million - Inside Story. One Minor in a Million Why was Morris’ special-edition lilac?

Some time back in 1980 my brother and I were to be found mountaineering up a pile of old cars in a Canterbury scrapyard. Our mission was to retrieve a bumper from the remains of a Morris Minor perched at the top of the stack. It was no ordinary bumper. Or rather, it was no ordinary Morris Minor. The lilac colour of what was left of the car was the giveaway. 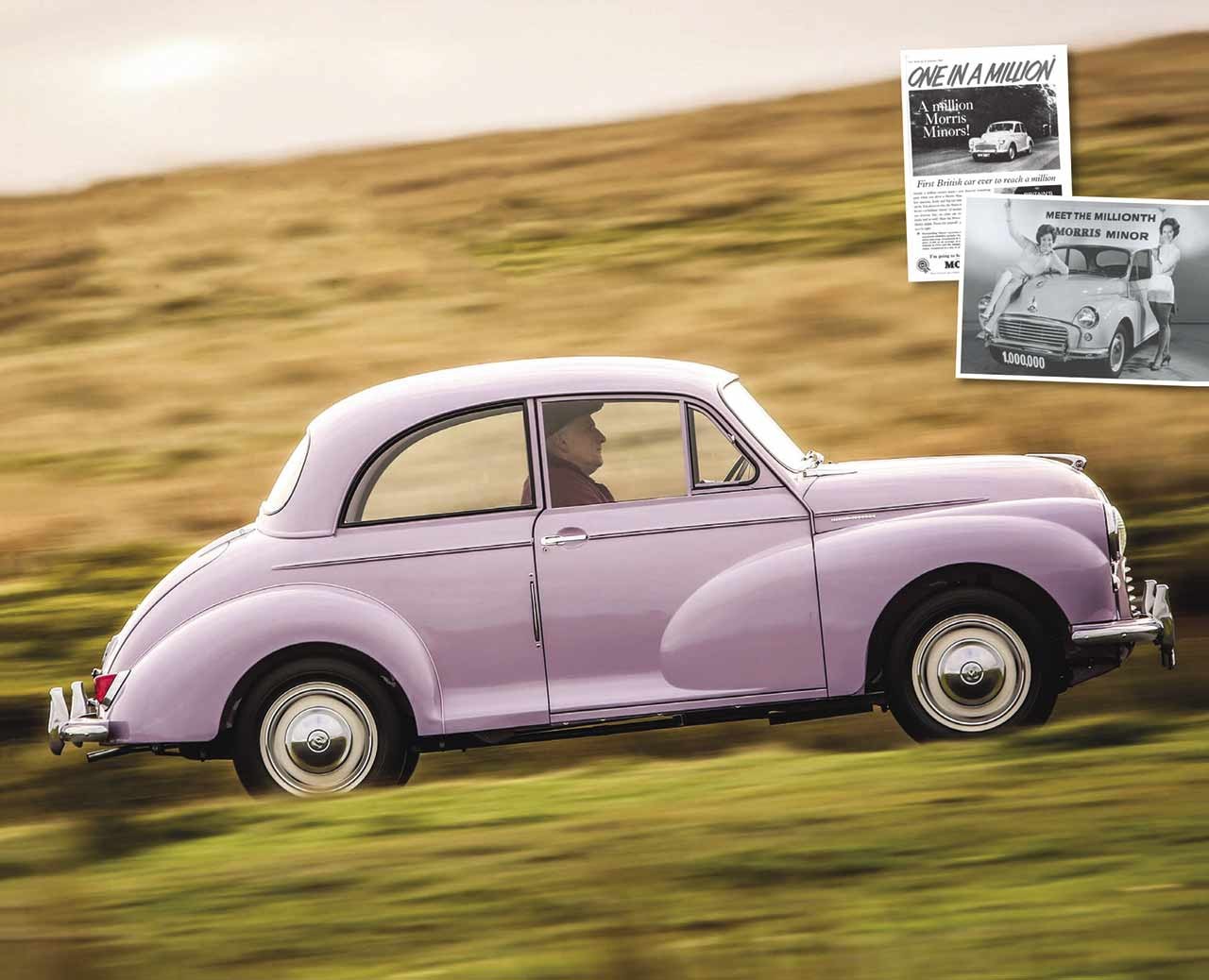 What we were dismembering was one of just 350 examples of the Morris Minor Million, a limited edition made to celebrate the production of the millionth Minor. Needless to say, I took the ID plate as a souvenir, along with the special ‘Minor 1000000’ script on the boot. Charmingly, it was adapted from two ‘Minor 1000’ badges, the ‘1’ being milled off the rear one and a hole drilled to take the rear fixing peg of the first badge. 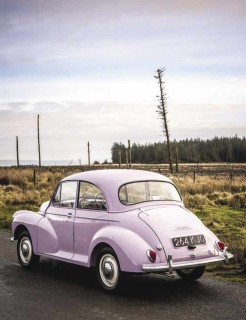 The Million was Britain’s first limited edition, as we understand the marketing term today. But how did it come about, and why that startling lilac? The answer was revealed by old Morris hand Jack Field, who had been sales promotion manager for the parent Nuffield Organization. By 1960, the Minor had been in production for 12-odd years. Despite its relative age, sales had only peaked in ’58 and were holding up well. The millionth car was due to leave the lines at Cowley in late 1960 – the first time a British vehicle would achieve this milestone. Admittedly, a year earlier VW had produced its three millionth Beetle. But it is only fair to point out that it took until 1958 for Renault to breach the one-million mark with its little 4CV, first on sale in 1947, while Citroën’s millionth 2CV only arrived in ’1962, nearly 14 years after its 1948 launch.

Given the extended range of cars produced by Nuffield and by BMC, the firm had every right to feel proud, and to want to celebrate the event. Rather less proudly, the millionth Minor was meant to have been the star of the 1960 Motor Show, but production was delayed by unofficial strikes at some BMC factories, and the car, with a build date of 22 December 1960, would officially only come off the line on 3 January 1961.

This Minor, and 349 others, was made to a unique specification, and all but one car have build dates in December 1960 – scattered among the production of regular Minors, but with all being given consecutive chassis numbers.

Formally announced on 4 January 1961, all 350 Minor Millions were two-door De Luxe models. Just 30 had left-hand drive, and all were painted lilac, matched to ‘white gold’ ivory leather trim. As well as the off-white hide seats with their black piping, the Million featured black carpets, chrome rimbellishers, and special ‘Minor 1000000’ motifs on the bonnet and the boot.

The boot badges were modified by an 18-year-old apprentice, Keith Philpott, who in conversation with Ray Newell of the Morris Minor Owners’ Club recalled dimpling an exposed part of the milled section by hand, so it blended in better with the embossed detailing between the badge’s figures. If you look closely at the example I rescued, you can see a little cluster of Mr Philpott’s dimples. The bonnet emblems, however, were one-off castings.

So, why the colour? Ultimately the choice was made by Jack Field, as he related to me, and it was hamstrung by the imperfect paint technology of the time: “Donald Harrison, the sales manager, said we were going to build the millionth Minor. I asked whether they wanted any particular colour. ‘Yes,’ he said. ‘They want gold or silver.’ So I got hold of the paint superintendent and he said we’d better go to ICI. So off we went, and I put my story. ‘Well, we can’t do gold,’ they said. What about silver? ‘We could do it,’ I was told, ‘but it would only last three months.’ So I asked what colour I could have. 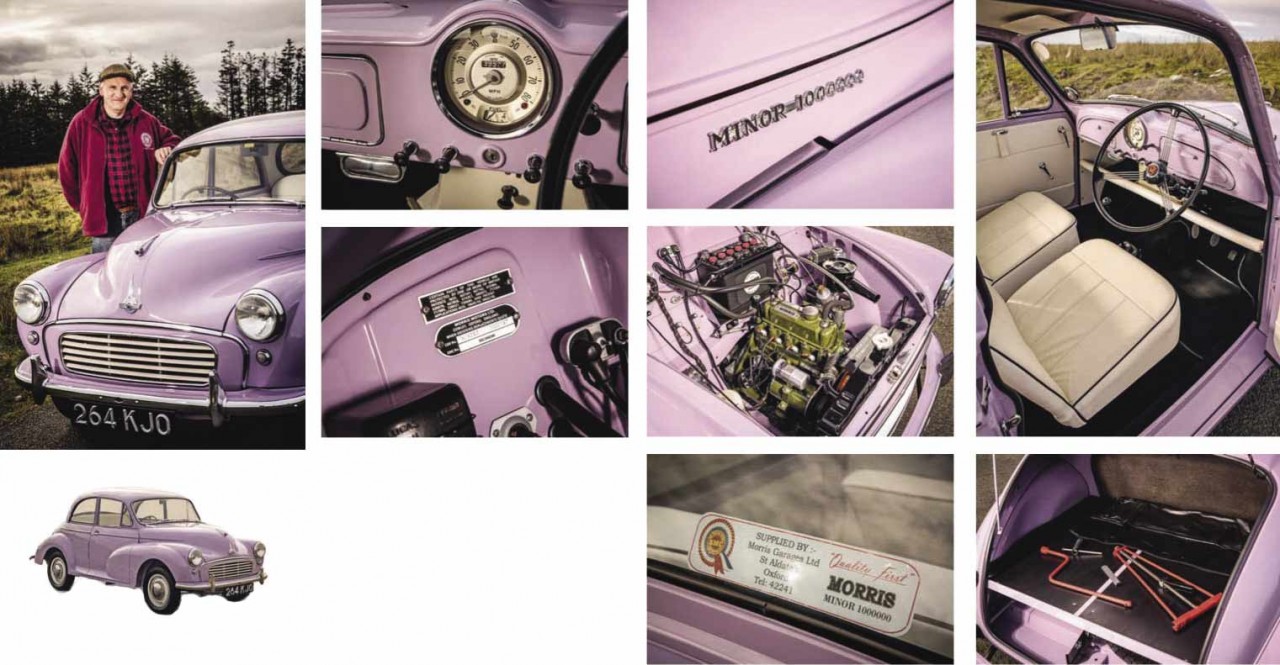 ‘Any colour in our regular range,’ was the reply. So that was that. It was agreed that the plant would do six or seven Minors in assorted shades, one being that lilac. I know I did an orange one, because Donald Harrison had a passion for orange, and I thought he’d choose that. And I think there might have been a kind of pale blue.”

Cars sprayed in these various colours – which seem to have included a yellow, a pink and a lime green – were gathered together for a group of senior Cowley managers to consider one day, after they had finished lunch. But things did not go as planned, and in the end the lilac was chosen primarily as the result of what was evidently a slightly over-lubricated meal. These were not unusual at BMC, where high-ups had their own dining room and unlimited alcohol on tap.

Many decisions, often capricious, seem to have conformed to a practice that might be termed ‘Management by Agreeable Luncheon’. A classic example was when Alec Issigonis, probably after the odd one or two of his favourite Dry Martini cocktails, emerged from lunch and decided that he couldn’t stand the sight of Austin 1800s in white with a black interior. Without consulting the sales department, he issued an edict cancelling that particular colour combination, despite the fact that apparently it accounted for 60% of 1800 orders at the time.

This sort of management ambience continued into BL times, according to Ray Bates, an ex-Triumph engineer who joined the board in 1970: “The attitudes I encountered were Victorian. I was entitled to eat in the Longbridge executive dining-room – a great honour. There was gin, scotch or whatever you wanted. I remember [director of engineering] Charles Griffin saying to me: ‘You’re the junior member, you’ll have to carve.’ It was like sitting in a gentleman’s club, watching the world go by…”

Returning to the Million, Field explained how the plan to have the directors choose the colour went awry: “Unfortunately, they came down after lunch, and were in no state to make up their mind. All of them went except Donald Harrison, who asked me if they’d chosen a colour. ‘No,’ I replied. ‘Have you?’ When he said he hadn’t, I asked him what he wanted me to do. ‘Please your bloody self,’ he said. So I chose the colour. It was generally acclaimed. You have to remember that this was a time when women were beginning to have more influence in colours being chosen.”

Indeed, in the context of the time, the lilac probably wasn’t that outlandish. Pastel colours were in vogue. Think of the marvellous palette of shades offered on the early Citroën DS. Then there was probably the most controversial car at the 1960 Motor Show at which the Million was to have been exhibited. The choice of a similar lilac for the unspeakable Lea-Francis Lynx may well suggest that it was regarded as the trendy colour of the moment, a notion reinforced when you consider that the ill-starred Lynx featured at the time on the cover of a fashion magazine. Meanwhile the Minor carried on being built until 1971 – or ’1972 for final deliveries of the van.

In total 1,619,958 would be made, with the wood-framed Traveller taking an increasing proportion of diminishing sales. Today, about 70 Millions survive. These include the very first car – which, perhaps unsurprisingly, ended up being resprayed bright red. Alas, my ‘historic’ bumper perished along with my Minor in an accident some 20 years ago. But Keith Philpott’s badging is on my desk as I type these words.

‘IN THE END, THE LILAC WAS CHOSEN AS THE RESULT OF A SLIGHTLY OVER-LUBRICATED MEAL’

Longtime Minor enthusiast Ted Brooke bought Million chassis 1000167 in 1993 as a wreck: “I can always remember from when I was a child driving past a very rural BMC agent in Wales and noticing a funny-coloured Morris Minor in the showroom – the first Million I’d ever seen and one of only two allocated to Wales. This inspired me to look out for one for myself.”

Brooke restored the Morris himself, over 18 years, completing the task in 2011. Since then, the Million has been entered in various national events, taking first prize at the Manchester Classic Car Show in 2015 and being runner-up in that year’s Meguiars Club Showcase at the NEC Classic Motor Show.

In 2017 the car achieved Grand Masters status, after five years participating in the Morris Minor Owners’ Club concours series – making it probably the very best Million that you’re ever likely to see.