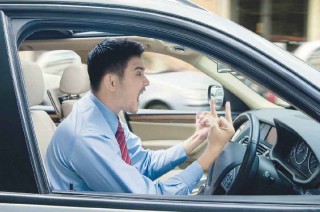 Given that I’m writing this during the run-up to Christmas, I suppose I should be full of peace and goodwill to all mankind, but I’m afraid I’m not. This is, in part, thanks to using our wonderful public transport system several times this week and, if anyone who’s reading this has the misfortune to commute into central London on a daily basis, I can only say that you have my deepest sympathy. I’d also wager you have the patience of a saint.

COMMENT: BOB HARPER … has had quite enough of antisocial and impatient drivers

I was going to launch into a diatribe on the inefficiencies of bus and tube travel in London but, I’ve come to the conclusion that it’s not necessarily the mode of transport itself that’s the problem, it’s the people who use it. Common courtesy seems to have gone out of the window, and this isn’t just evidenced by the way people push or bump into you without pausing to utter a ‘sorry’; it’s something I’ve noticed on the roads, too.

There seems to be a new breed of driver emerging nowadays; those who simply don’t give two hoots about anyone else. They evidently think they’re more important than anyone else, and so need to get wherever they’re going in a blinding rush. Quite frankly, if you have to drive like a total numpty to get somewhere on time, you really should have left a little bit earlier.

But what is this behaviour that’s got me wanting to swear so profusely? Well, it’s a whole range of impatience, typified by drivers leaning on their horns if the first car at the traffic lights doesn’t pull away more than a nanosecond after the green light shows. It’s Clapham High Street for God’s sake, not Santa Pod.

My biggest pet hate, though, is drivers who simply can’t be bothered to queue. One junction I traverse regularly has a set of traffic lights with a filter to turn right and, during rush hour, there’s inevitably a queue of cars waiting their turn. Equally inevitably there are several self-important cretins who drive in the left lane all the way to the traffic lights, then cut in front of the queuing line of cars. If there happens to be more than one cretin, the left lane becomes blocked as there’s nowhere for cretins two, three and four, to go.

I’ve seen the same thoughtlessness with cars pulling out of side roads, too. If you’re turning right on to a main road, but the lane into which you’re attempting to manoeuvre is already full of stationary cars, the correct course of action is to wait until a space becomes available… but not for Mr (or Mrs – selfishness behind the wheel traverses gender barriers, as far as I can tell) I’mMoreImportantThanYou. They’ll merrily drive down the wrong side of the road to get to the front of the queue and block the main road to save a precious few seconds. Almost inevitably while texting or making a call on a handheld device.

So, what’s the solution? Obviously, the fitment of some 007-style accessories from Q Branch wouldn’t go amiss, or perhaps some sort of black box could be installed in cars that could detect antisocial behaviour at junctions. Flat tyre for a first offence, ECU meltdown for the second, then a snapped timing chain for the third.

Or perhaps Santa could do me a favour and bring everyone in London a copy of the Highway Code next Christmas. Or better still, instead of those awful jokes in crackers, we could have Highway Code conundrums. No Christmas pud if you can’t get all the correct answers…

There seems to be a new breed of driver emerging nowadays; those who simply don’t give two hoots about anyone else.