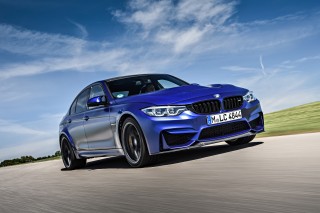 FIRST DRIVE: F80 M3 CS  We get behind the wheel of this hardcore M3.

There’s always a buzz in the office when the details of a new M car emerge and when it’s a special edition M3 that’s doubly true. Here we have the new M3 CS, a four-door doppelganger of last year’s M4 CS – more power, an even more finely-honed chassis and some exterior additions to complete the package. 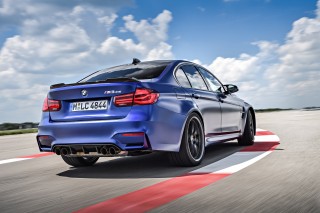 It should drive well but with worldwide production limited to just 1200 units you’ll need to get your skates on if you want to buy one. You’ll also need the best part of £90k to join this exclusive club and that’s F90 M5 money so the M3 CS better be good. It’s also the last of the line of the F80 generation of M3 as production is due to cease in the summer. The bottom line is that this model of M3 will not pass the new WLTP emissions regulations and while BMW could modify it to get it to pass (as it’ll do with the M4 Coupé) it just wasn’t going to be worth the time and effort with the M3. Production was due to end in October as BMW readies the next generation of 3 Series for its introduction at the end of this year so this is the last of the F80s.

But what a way to go. There are no hardware upgrades for the engine but a bit of tweaking to the ECU has liberated an additional 10hp over the M3 Comp Pack (and 29hp over the standard M3) while torque is up by almost 10% at 443lb ft. Unsurprisingly its vital stats are pretty impressive with a 0-62mph time of just 3.9 seconds (that’s with the M DCT ’box that’s standard on the CS) while its top speed is 173mph. That latter figure is still limited but is part of the M Driver’s pack that comes on UK-spec M3 CS models.

The CS will be easy to spot when it hits the UK’s street as it sports a unique carbon front splitter, a carbon rear Gurney flap spoiler on top of the boot lid and a carbon rear diffuser as well as a vented carbon bonnet that’s similar to the one on the M4 GTS. Other external differences include new lightweight Style 763M wheels in Orbit grey (which, along with the carbon bonnet, shave 10kg from the CS’s kerb weight) – 19” up front and 20” at the rear like the M4 GTS – and these are wrapped in 265/35 and 285/30 Michelin Pilot Sport Cup 2 tyres. The CS will come in one of five colours – Alpine white, San Marino blue, Lime Rock grey, Black sapphire and the BMW Individual Frozen San Marino blue seen in the pictures.

The suspension of the M3 CS has also been borrowed from the Comp Pack model but for the CS there has been a comprehensive reworking of the software for the Adaptive M dampers as well as for the Active M differential and the electric power steering. Everything has been fine-tuned to get the very best out of the Cup 2 tyres and once you start driving the car it’s transparently obvious that this is the best-driving F80 M3 we’ve experienced. While the steering still might not be the most feelsome set up out there, the CS turns in far more sweetly than before and every small input from the wheel gives an instant response from the front wheels. It’s far more pointy and darty than before which gives you a huge amount of confidence in what the front end will do. Understeer is notable only by its absence.

At the same time the rear end is significantly more planted than it used to be – again, no doubt in large part thanks to the Cup rubber – and you can get on the power early coming out of corners and really punch your way down the next straight. On less than ideal surfaces the tyres just seem to grip and grip, and there’s none of that scrabbling sensation you can experience in a standard M3 when it’s struggling to unleash its torque. On the twisty roads around the Nürburgring where we tested the CS it was utterly mesmerising, coping brilliantly with abrupt direction changes and feeling utterly composed when taking dips and crests at speed. We’re not sure how well it’ll perform on wet and greasy UK roads in the winter when those Cup tyres won’t be feeling quite so surefooted, though.

While you probably won’t be able to distinguish the CS’s performance over a Comp Pack M3 in a straight line it does feel as quick as the figures suggest and as there’s so much dry grip you really can get the best out of the engine. The additional torque makes itself felt as you drive out of corners while the engine also seems to be a little sweeter at the top end, surging up to its 7600rpm red line without ever feeling like it’s going to run out of puff. And with its new exhaust it sounds divine too, popping and crackling on the over run and with a less digital augmented feel to its bassy soundtrack.

Inside we have the Comp Pack’s seats (clad in Merino leather in a two-tone black and Silverstone combination) while swathes of Alcantara cover most surfaces. Unlike in the M4 CS there are no composite interior door trim panels, possibly becausethe M3 CS is the slightly more sensible and practical four-door machine. It does gain a red start button like the new M5 which is either a nice touch or a bit naff depending on how you view these things.

Overall, though, the CS is a glorious swansong for the F80 M3. It goes incredibly well and the chassis revisions and those Cup tyres elevate it to the next level as far as handling is concerned. But £86k is an awful lot of money. £23k more than a standard M3 and £20k more than a Comp Pack car with the DCT ’box. You’d have to really want one to pay the extra. 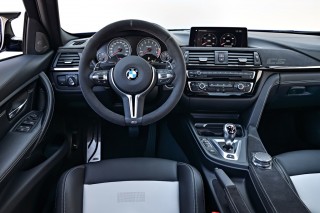