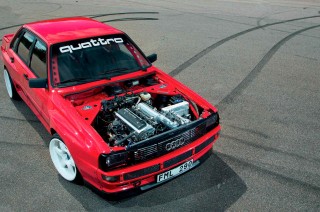 Acceptable in the Twenties. A lot of mad things happened in the 1980s, particularly when it came to cars bearing the four-ringed badge. But a four-door version of the homologation hero Sport Quattro? That sounds like a very 2020 idea… Words Dan Bevis. Photography Patrik Karlsson.

The 1980s was a time of shimmering, pastelhued excess. The future was bright, the trousers were orange, and hair products were more important than anything else in the world. You were nobody without a Filofax, your carphone had a thick and curly wire, and you had a Rubik’s cube on your desk as a vibrant but static ornament – because you were too busy rocking out to Prince to solve the bloody thing. The epicentre of eighties excess, the towering monoliths of Canary Wharf, was neatly divided into two automotive cliques: the Porsche 930 Turbos, with their red-braces- and-Brylcreem drivers ever eager to bait the 205 GTIs through the Limehouse Link, and the AMG-enhanced Merc SELs, resplendent in gold badges and acres of ostrich leather.

Money talked, and you were shouting loudest if you had either a hard-snorting turbo or a well-stocked drinks cabinet in your car. This enthusiasm for boisterous motors bled out rather effectively into other levels of the motoring strata, and perhaps most relevant to our interests here is what was happening on the rally stage: Audi’s development of the Quattro system had immediately rendered every other competitor old-hat, and the advent of the Sport Quattro S1 in 1984 heralded a new dawn for rally cars bearing the fabled four rings on the nose. Quite simply, the Sport Quattro rally car was a game-changer, and its necessary homologation-special road car sibling earned an immediate cachet that endures to this day.

Over in Sweden, the young Tobias Hellmansson was certainly paying attention. He may have been born right at the end of the 1980s, but all of this Quattro magic was absorbed through the umbilical cord, intertwined in his very DNA, and the outlandish four-door creation he’s crafted with his own two hands is proof that the all-pervading Quattro magic spread its ripples widely. 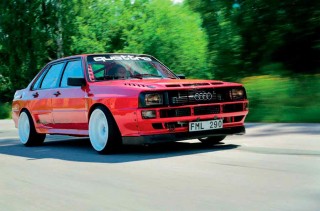 Checking out the photos here, there’s quite a lot to unpick - so if your brain’s struggling to process the sheer unfettered magnificence of what you’re seeing, let’s break it down into bite-sized chunks: what you’re looking at is essentially three cars in one. It’s a B2-generation Audi 80, extensively reworked to incorporate the aesthetics of the Sport Quattro, running the engine from the ur-S4. And just for fun, there’s a bit of ur- Quattro thrown into the mix, and shades of Coupe GT… it’s really a sort of greatest hits mash-up of the 1980s. Except that, unlike your seedy uncle’s record collection, this is a greatest hits that’s really quite spectacular in 2020.

As you’d no doubt expect, it took a hell of a lot of work to create this custom one-off, and it sounds like Tobias is still eddying in the turbulence of it all. “This is by far the biggest car build I’ve ever embarked upon,” he says, with that thousandyard stare of a man who’s seen a few things and made it through the other side. “I’d modified a few old Audis before, but nothing on this scale and never a Quattro. When I bought this car, it was originally just meant to be my winter hack, maybe a bit of drifting in the snow; it was cheap and pretty wrecked, with crash damage and a lot of rust. I was eighteen and had never held a welder in my life, but being young and impetuous I didn’t really see any problems here!”

Tobias wasted no time in pooling together a sizeable pile of parts to repair and improve the four-door 80. He’d already stockpiled a bunch of 80 and GT parts from previous projects, and when he found a cool set of wheels for the car it caused the mental cogs to start whirring: he’d found himself a set of Brock B1s which were 9”-wide, meaning that he’d have to wide-body the car if he were to get them to fit. So it was this set of rims that really dictated the direction of the project – demonstrable by their absence today, their legacy lives on in the car’s remarkable makeover. 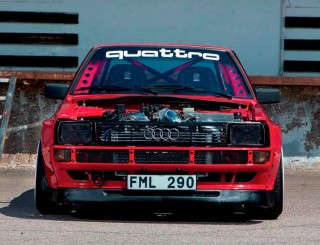 “My first thought was to follow the style of the ur-Quattro,” he recalls, “but the more I thought about it, the more I realised that people were doing that very same thing all over the world… and then it hit me. Why not make the four-door look like a Sport Quattro? I’ve got files and files of photos on my computer of Audis I’ve seen and liked the look of, probably more than 5,000 pictures, but I’ve never seen a four-door Sport Quattro project…”

With this realisation colourfully arrived at, there was no choice but to jump in with both feet. The idea was too awesome not to pursue. So he started saving his pennies (and let’s not forget that Tobias was still at school at this point) and eventually he’d scrimped and saved enough to buy one Sport Quattro rear quarter. Just one. But that was enough to get the whole project rolling. When he taped it onto the car to see what it looked like, it was a revelation: this wasn’t just a cool idea in theory, it was going to be a bloody cool car in reality too. And it really does make a lot of sense to use an 80 as a base for a Sport Quattro project – the homologation model’s windscreen, for example, was the steeper-raked unit pinched from the 80 to reduce glare on the dash. The logic of it is writing itself really, isn’t it? Naturally there would be a few sizeable hurdles to vault – not least the fact that the four-door 80’s wheelbase is much, much longer than a Sport Quattro’s, and of course there’s the presence of those extra doors – but these concerns could wait. As he sat there in the garage, gazing at the wide homologation wing taped to his humdrum saloon, Tobias’s imagination was going into overdrive.

“That one moment derailed the whole project,” he laughs. “I knew I was going to be building something really serious. So I started fabricating a rollcage; I’d never done anything like that before, but again I looked to the internet for ideas. I used to love reading people’s build threads from all over the world, and I’d garnered so much inspiration and advice over the years. Finally, I figured that if they can do it, so can I. I’m very stubborn!” 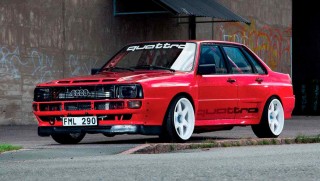 It’s amazing the way he reels off these achievements as just fun ideas that he’s had; sure, Tobias was inspired by all those online builds, but there’s a lot of inherent skill and persistence here that actually made all this happen. Most people could probably knock up something that vaguely looked like a rollcage if they had a bunch of tubes, but to do it so that it was safe and effective as well as fitting properly and looking great too? That’s a whole other ballgame. Every individual element of this car is a remarkable achievement.

“The project took quite a long time, because for the first two years I was still at school,” he reasons, which is fair enough really. “After that I had a few different jobs but never really had the job I wanted, so I didn’t have much money to spend on the Audi. Without money, these things will always take time… but I had time, plenty of it.”

Painstakingly, piece by piece, Tobias bought one part at a time as funds allowed and tackled the project methodically. Having spent an improbable number of hours, days and weeks eradicating all the rust and perfecting the shell (to the extent that he nearly gave up, figuring that he could have saved two years of his life by starting with a better Audi 80 in the first place), it all started to come together in style. Through sheer grit and determination, the body was converted to run the much wider Sport Quattro wings, with endless further modifications to fit the appropriate bumpers, bonnet, front grille, and everything else from the two-door homologation hero to reimagine its four-door sibling. In a final glorious flourish to accentuate the evolution of OEM+, Tobias painted the finished product in classic Tornado Red, adding in a bunch of extra silver flakes to the mix to really make it sparkle and glitter in the sunlight. 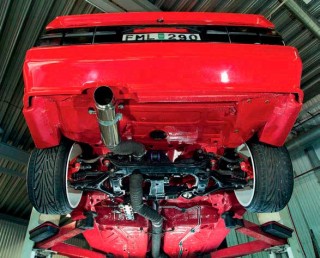 “I first showed the finished car at the Elmia Custom Motor Show, which is a huge meet here in Sweden,” he says. “A few months before the show I’d sent off an email idly wondering if I could display the Audi, and two months later I got a reply saying I’d been accepted. I was shocked – the car was in a thousand pieces, the cage wasn’t finished and neither were the rear wings, it wasn’t painted… there were a lot of WTF moments, but in the mad panic to get it finished I had a lot of help from my dad and my very understanding wife! I worked day and night with my dad for weeks to finish it, all in secret because I hadn’t told any of my friends about it, and we just about made it. The Compomotives came back from the paint shop on the day of the show, and we drove there in the car we’d built. And the response when we arrived was incredible!”

It’s a fairytale project, it really is. Tobias has built up this unique creation from scratch using self-taught skills, and the end result is a true dream car. It takes all of those 1980s fantasies, shakes them up, and reworks it all for the 2020s. The greatest hits of Audi for a new generation.

THE POWER OF FIVE

The engine in Tobias’s project is, appropriately enough, a five-pot – a 2.2-litre 20v turbo. It started life in an ur-S4, which is a model that some modern Audi enthusiasts may not be familiar with: the original S4 was based on the C4-platform Audi 100 four-door, from 1991-94, designed to replace the outgoing Audi 200 Quattro Turbo. The turbocharged and intercooled AAN-code motor made a healthy 227bhp in the ur-S4, and it’s running in a fairly stock state of tune in Tobias’s car… for now. Mated to an Audi 200 20v gearbox and S2 rear diff, the scene is set for more power. And that’s precisely what’ll be coming next. 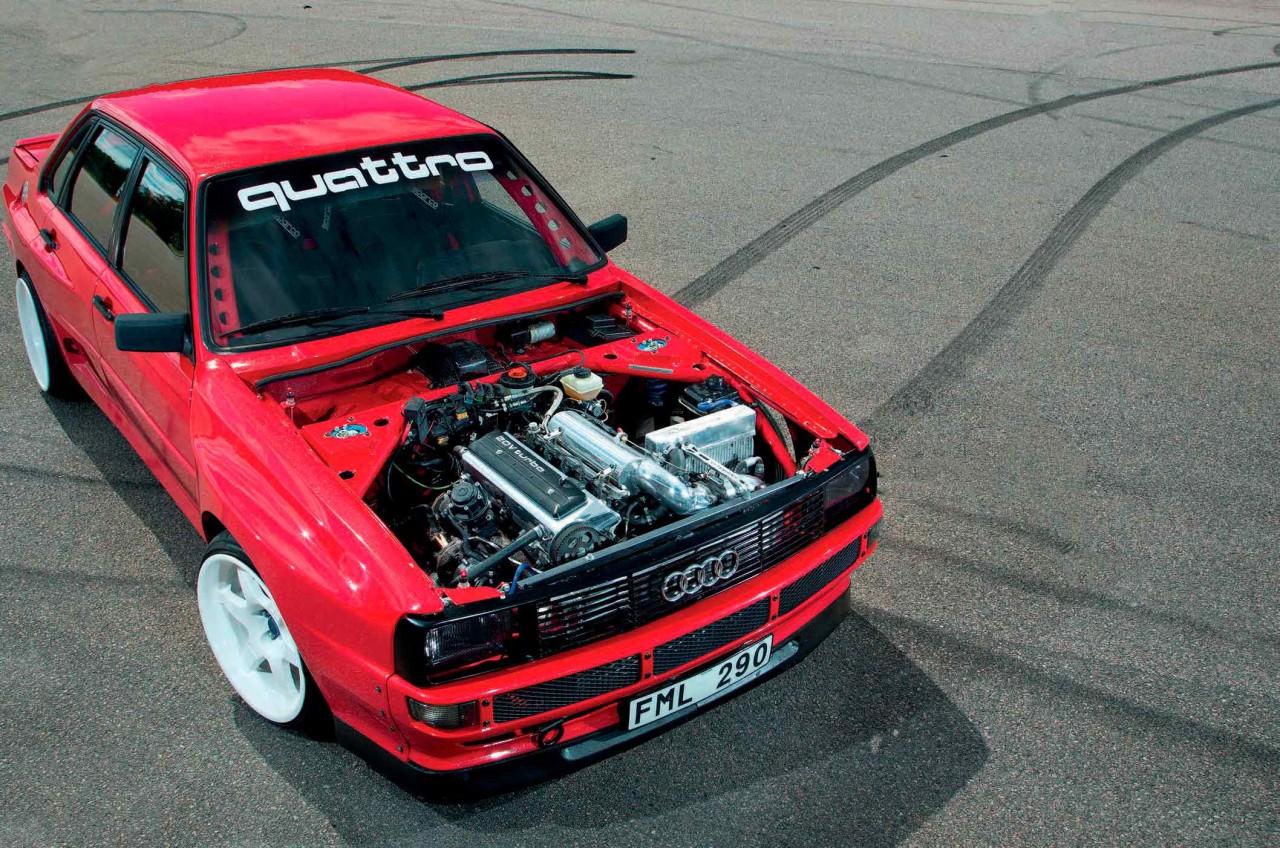 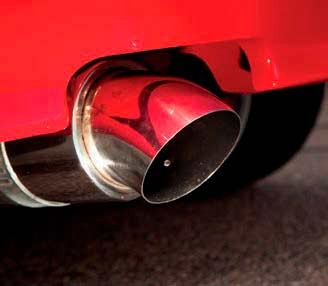 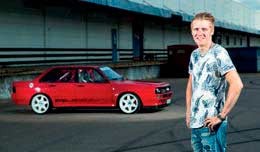 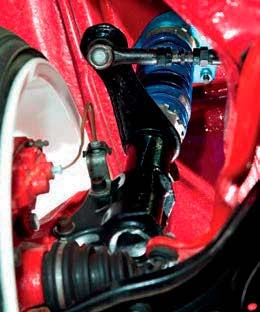 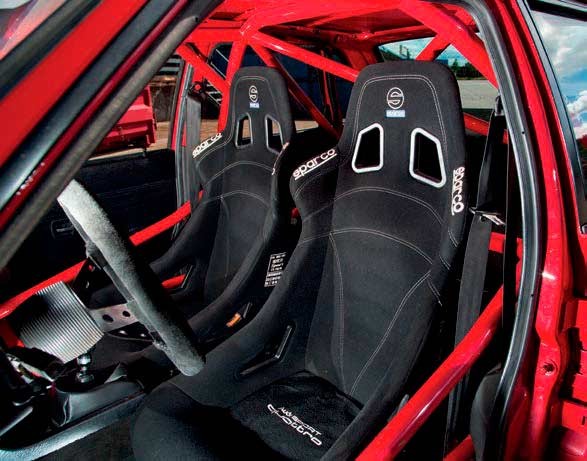 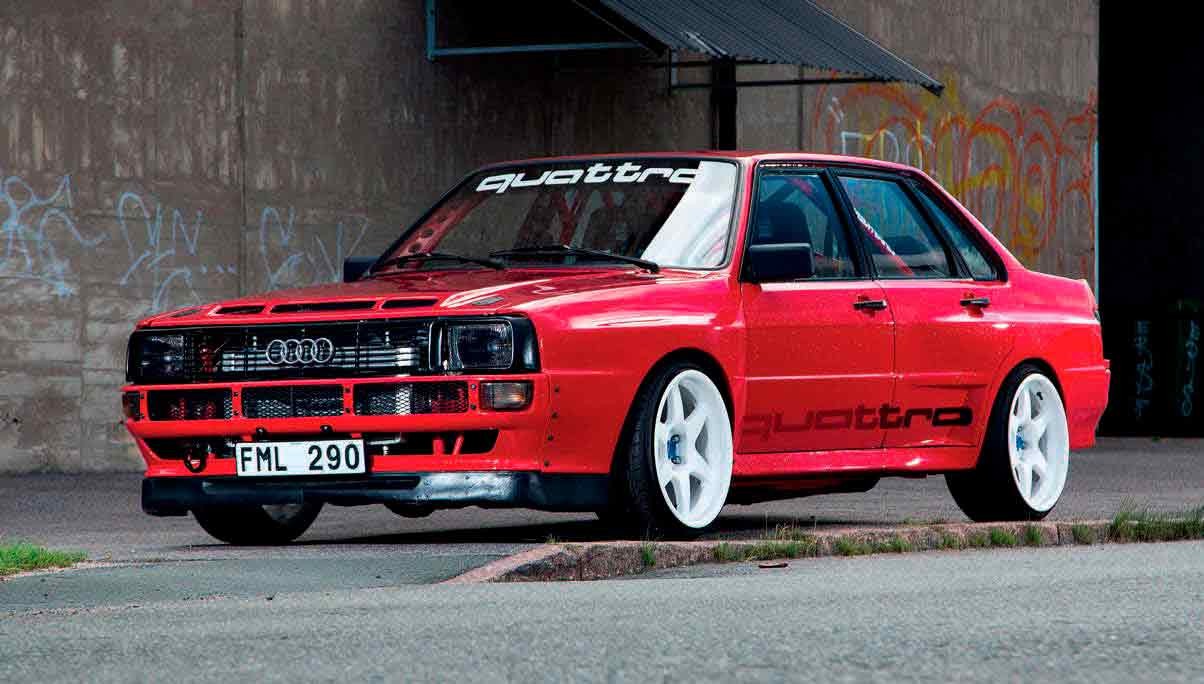 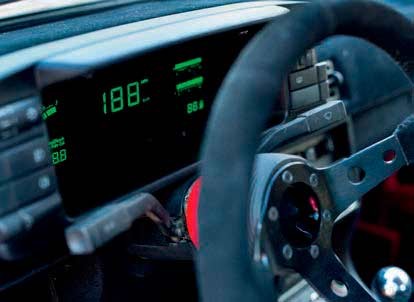 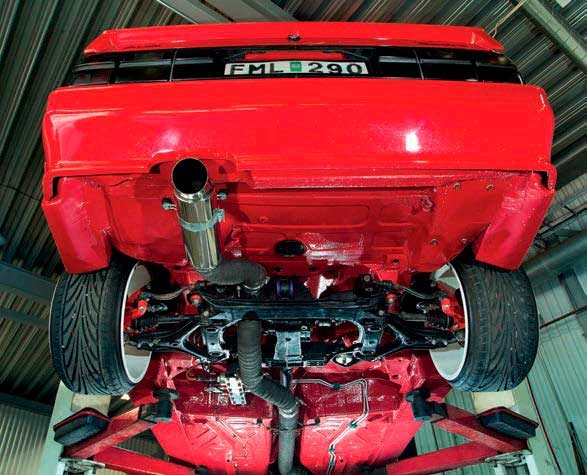 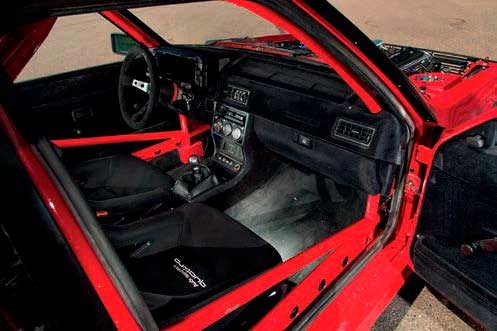 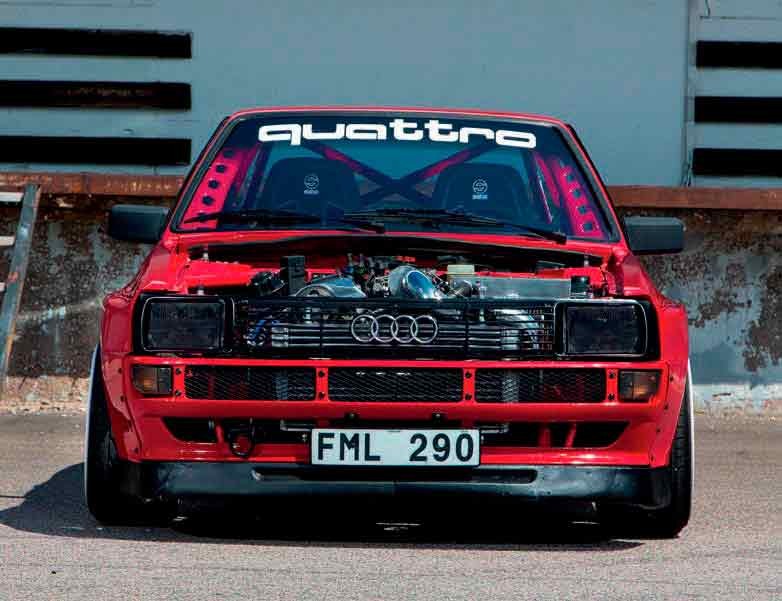 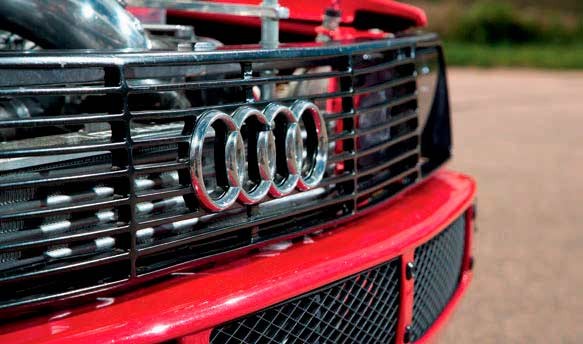 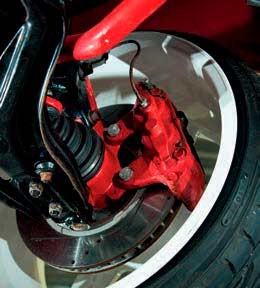 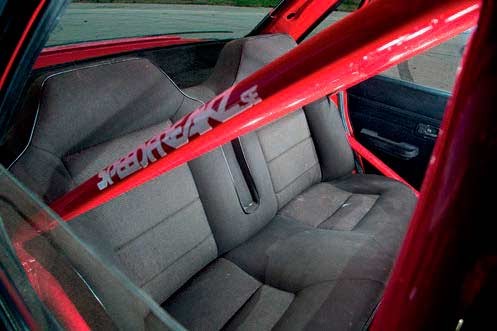 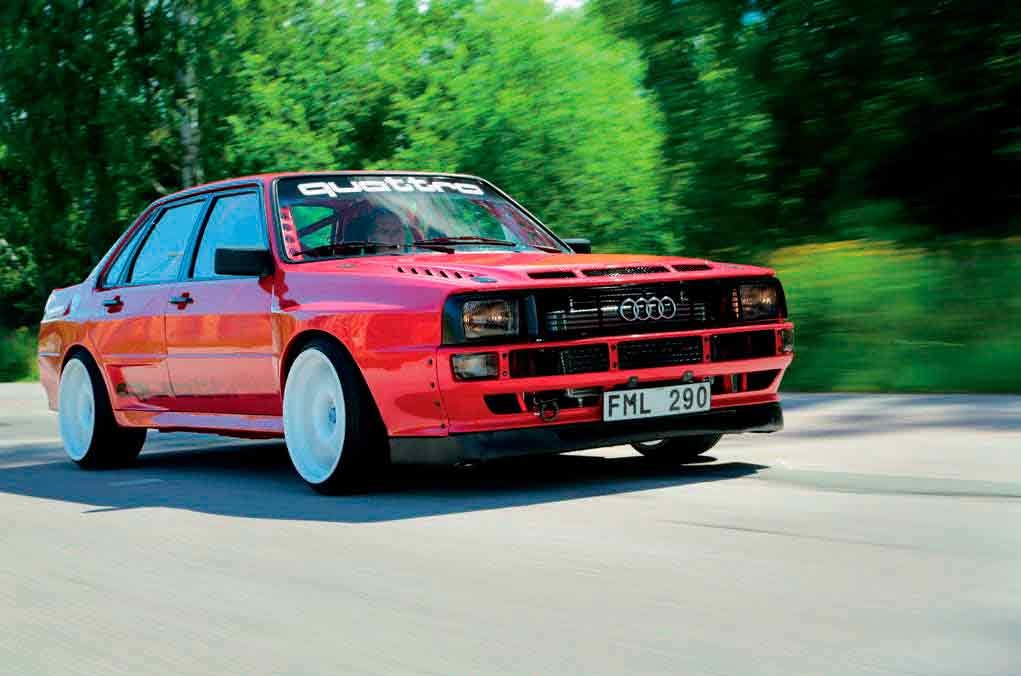 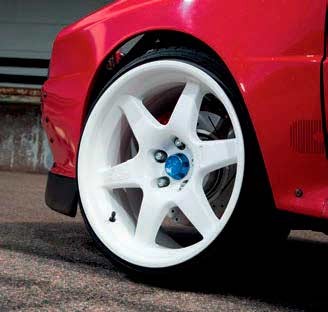 White 10x18-inch Compomotive MO6 wheels look stunning against the Tornado Red. Practical...kind of Fully flocked dash is fantastic. Tobias’ 80 has certainly been doing its squats We do like a clean pipe. Above: Tobias’ 80 quattro, quite simply art in motion.

Dream Audi: I think I built it!

Favourite thing about your car: The fact that it’s street-legal

Hardest part of the build: The wide rear wings and opening rear doors!

It’s all been a lesson, I’ve learned so much from this build

What’s next – any future plans?