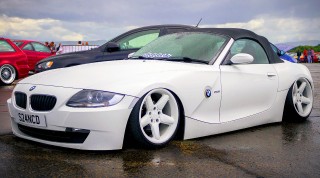 World war Z. Serial slammer, Niall O’Dowd, kills it yet again with this super stanced and rather dapper BMW Z4 E85... You may be looking at these pages thinking this dude and his number plate look familiar, and you would be right. Yes, Niall O'Dowd has been here twice before with a fine little Lupo and a grid-look Mini. Each car was blessed with the S24NCD number plate and he built them to live up to the name - or rather down to it.

In fact, every time we come across Niall, he’s bigger in hair and lower on stance, that's just his thing. He also likes a bit of craic, and controversy when it comes to his cars - and this stunning Z4 fits right into that category!

Not so long ago, this car was totally standard and being innocently driven around by its one lady owner (we’re not referring to Niall here). He actually got hold of it in May last year with a clear plan of attack; it simply had to be the lowest Z4 in existence. For this to happen only one man was up to the job, the superhero of stance himself John Peden.

Some of you may not realise the extent of what’s involved in getting a car glued to the ground like this, but John Peden knows all the tricks and has invented many of them himself. Sure, you can fit hydraulics to get lows, but taking it even further to the floor demands a lot. In this case, custom top mounts and Eibach arms are used for setting camber and ensuring the super wide wheels will fit right up into the arches - which had to be puled by 2 inches each side! The subframe was trimmed in places too, for clearance, and only then would the body meet the tarmac. This was all designed around the wheels and Niall is particularly choosy when it comes to this area. “I had OZ Breytons at first but they became too popular,” he explains. “So I searched for something else and ended up importing Carline CM6 rims from Germany. We still had work to do, building them up, colour coding the centres and giving them gold plated bolts but they do look the part.” He's not wrong there and the combination is just stance perfection.

Hydraulics can take you low, but to get this low required lots of work on the camber, with the subframe trimmed in places too.

Elsewhere on the car you'll find plenty of M Sport kit including the bumpers and full, red, nappa leather interior. Niall has gone a bit further in the cabin too, having the door cards re-trimmed in matching red leather as well as the roll hoops, keeping it all classy and a bit OEM+. Under the bonnet, Zeetech Tunhg have given the 2-litre lump a remap to make use of the custom manifold and exhaust, which pops out the back with genuine BMW Z4M E85 tailpipes to keep with the theme.

Niall revealed the BMW Z4 E85 at Dubshed this year, just as he did with his Mini in 2013. Both cars had the crowds swarming around all day so he’s making the right impression. We can only wonder what he’ll come up with next year but you can safely bet whatever it is will be damn wide, and scraping the ground!

Full M Sport kit including binpers and trim, de-chromed, full respray in BMW Alpine white, arches widened by 2in all round.

Thanks to all my friends and family who helped with support and abuse to drive me to get the car looking so outrageous. John Peden of Peden Conceptz for the suspension work and paint Barry from SL Trimming Ronnie from OCD.NI for the detail.

How did you manage to find the parts for the 24?

“I just got lucky with Internet auction sites, that’s where I picked up the wheels and the interior.”

You’ve had a big career change since we first met you?

“Yes, I was studying to be an architect but switched to being a chef as that’s more my passion”

What are you cooking up next then?

“I’ve bought another Mini Cooper S, not quite sure yet why or what I’ll do with it but I’ll do something! The ultimate goal is a Porsche though!”

Can your hair get any higher?

Slammed to the feckin weeds - as they say in Ireland