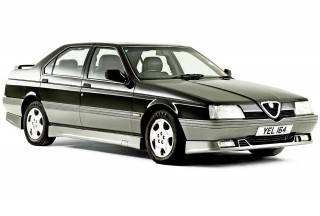 Alfa Romeo 164. Alfa’s big saloon is a joy to drive but buying one needs care – here’s how to do it. Words Russ Smith. Photography Julian Sandiford. Buying Guide Seven steps to choosing the best Alfa Romeo 164.

Billy Clarke has been in the garage trade for about 50 years and Alfa 164s have been one of his specialities for the past 15 of these. He restored the body of the car featured here and has two more awaiting similar treatment.

Philip Clay from Alfashop in Norwich has been fixing and selling parts for Alfas for 30-plus years and is a fount of knowledge on 164s. He says the up-to-1990 12-valve V6 cars are the pick of the bunch.

Richard Kerr is the Alfa Romeo Owners’ Club’s 164 registrar and says, ‘They are not a cheap car to own and the availability of parts has become a serious issue – but the driving experience is absolutely divine and I highly recommend it.’

The 164 has been described – with some justification – as the best car Alfa ever built while it was still an independent company. The car was based on a transverse engine/ front-wheel-drive platform shared with the Type Four gang of Lancia Thema, Fiat Croma and Saab 9000, but has several advantages over all of these. Not least are the Pininfarina styling that set the 164 well apart from the rest of the quartet, and the use in higher-spec models of Alfa Romeo’s renowned – indeed, worshipped – 3.0-litre V6 engine. The early cars’ 2.0-litre Twin Spark units weren’t bad either. 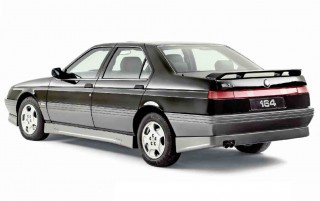 Its launch was greeted with great enthusiasm by Car magazine. ‘The 3.0 V6 sounds spine-tingling. There’s bags of poke (enough to make the steering wheel stiffen and writhe a little in low gears) and a wonderful smoothness that you just don’t experience in most executive machines. It’s a car that deserves to appear on every executive’s shortlist.’

High prices and tough competition meant they were never a common sight on UK roads and they are now sadly almost on the endangered species list – which is all the more reason to get one while you can. Prices are rising too, even for project cars. Here are the potential pitfalls to watch out for when buying yours.

Bodies weren’t galvanised until the 1992 model year, so earlier cars do that Italian thing – rust. Most important places to check are the front and rear screen pillars (and look for water leak stains inside the rears), inner wings, A-pillar/door hinge area, around the fuel filler flap and the front suspension tops. With the last-named also look for stress cracks, particularly by the bolt nearest the coolant reservoir. Front crossmembers rot out, along with the coolant pipe above – which is hard to find in the UK but only a few euros from Italy. 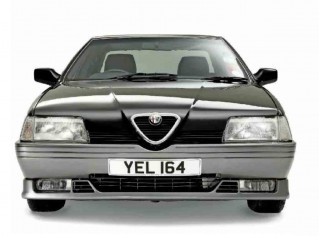 An even bigger problem is a rotten rear subframe, which supports the suspension arms and fuel tank. These are no longer available, so you have to repair what’s there or track down a better secondhand one.

Front subframes corrode too, but a little more slowly thanks to the proximity of the engine. You still need to check them, especially on a car that’s stood unused for any time, as they are extinct as well. While you’re under there, look at the lower spring plates on the suspension struts because these can rot out as well.

Don’t underestimate bumper damage, especially on S1 cars. You can get new ones from Germany but expect to pay £300- £350 each plus shipping.

The Twin Spark is pretty robust and easy to deal with, and the V6s are if anything even tougher. Billy Clarke says, ‘If cared-for they can do more than 300,000 miles without being rebuilt, but they are hard to rebuild with their wet cylinder liners – you really have to know what you’re doing, and a set of pistons and liners is nearly £900. 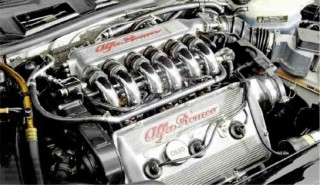 Also, if the crank does wear it can’t be reground and new they’re around £2000… if you can find one. Don’t ever overheat one of these engines or you’re in for big trouble, so check that the cooling fan works, keep on top of radiator condition and replace the thermostat regularly. Always inspect a car for signs of overheating and blown head gaskets – oil in the coolant or the other way round.’ A full rebuild could easily swallow £5000-£6000 – a gasket set on its own can be £300 and there aren’t many secondhand engines about because they’re popular for building Stratos replicas.

These do break, so change it every 30,000 miles or five years, whichever comes sooner. If you don’t, you’ll be left with a bunch of bent valves and a big bill for a rebuild. If a car’s history file isn’t clear when the last belt change was done, budget about £500 for the job and have it done as soon as possible.

At every second belt change it’s wise to change the water pump because their bearings are prone to failure. One big plus for the Twin Spark engines is that they have a timing chain that shouldn’t need replacing if the car has been serviced regularly.

There are two reasons to beware of any dampness in the carpets around the centre console. The engine and ABS control modules live under there and if these haven’t been wrapped in heavy-duty plastic (highly recommended) they can be ruined by leaks from the heater matrix. And if the matrix is leaking, replacement is a massive job. Ian Osborne, owner of the car here, says, ‘The whole dash has to come out, and that starts by removing the aircon unit from the engine bay. The matrix itself costs £30; to have it fitted costs around £1800. So it’s no surprise that I’ve seen 164s with a loop of pipe bypassing the heater.’ It’s the same with the electrically driven flaps that direct the heat flow, so set the blower to High and switch between screen and footwell to discover if the airflow changes as it should.

Inspect the steering rack for leaks, which are quite common. You’re looking at £200- £250 for a rack rebuild and about double that in labour to remove and refit it.

On Cloverleaf models try the suspension in both Auto (normal) and Sport (firm) using the button on the centre panel and make sure you can feel a difference. If there’s a fault in the system it defaults to Sport mode, which means the car can still be used but will need fixing eventually. The bad news is that electronic dampers are £600-£700 each, if you can find any – and that will almost certainly mean tracking them down abroad. Quite a few owners have converted a Cloverleaf to standard (softer only) suspension for £500-£600 for a set of struts. Ask if this has been done – it’s a distinct possibility if the car doesn’t switch to Sport mode (a red light should come on).

Other parts are also unavailable or rarely seen. These include front and rear screens, along with their chrome trim strips, which are very difficult to remove without bending. New door rubbers are almost impossible to find, as are most trim clips. The same goes for exhaust manifolds for both engines, so check them for cracks. It’s possible to have them welded up but that’s tricky and expensive. Finally, if any of a Cloverleaf’s ‘Salami Slicer’ alloys (as on the car here) is damaged, you’ll need Sherlock Holmes to track down replacements. 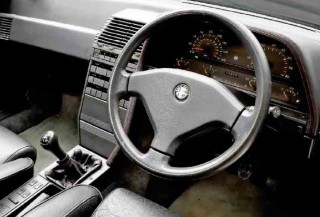 ‘My advice to anyone is don’t buy one, buy two’

Ian owns the 3.0 Cloverleaf featured here, one of eight 164s he has owned. ‘This was the third one I bought and I’ve had it for 14 or 15 years. Four of these were spent restoring it. It was so bad I should really have scrapped it. Over the years I’ve assembled a spares package – engines, gearboxes and other parts. I can’t imagine being without it because some of this stuff is so hard to get. My advice to anyone else would be: don’t buy one 164, buy two.’

‘I bought a 1997 V6 24V Super off eBay late one Saturday night. It was described as complete but hadn’t run for six years. What could possibly go wrong? Walkers Garage looked it over for me and agreed to replace the rusty subframes and get it running in between other jobs. Six months later the car was ready after I’d spent £7250 on it. I’ve since spent another £4000 on paint, clutch and detailing. In terms of what it’s worth that’s crazy, but it was never about the money.’

Cloverleaf (QV in other markets) is the new range-topper for 1990. It gets a 197bhp version of the 12-valve V6, while the regular V6 gets a catalytic converter that cuts output to 181bhp. The Cloverleaf also gets electronic Controlled Damping Suspension, Speedline ‘Salami Slicer’ alloys and even more goodies. It was more expensive than a Jaguar XJ6, so only a handful were sold in the UK each year. This is reflected in current prices: £7000 or more for the best.

Alfa introduces galvanising for the bodies in 1991 ahead of the September 1992 arrival of the revised 164 known as the S2 or Super. Twin Spark engines remain much the same but the V6 is now a 24-valve unit with 211bhp (232bhp for the Cloverleaf) largely cancelled out by a 100-180kg weight hike. Prices now are similar to those for previous models, though the best Cloverleafs will still be less than £7000.

In late 1993 Alfa announces the four-wheel-drive Q4 with a 231bhp 24v V6 and six-speed Getrag gearbox. It’s not officially sold in the UK but some find their way here. Today’s prices are comparable to early Cloverleafs but are rising. Production ends after 268,757 are built.

Part improvement, part insurance policy is to wrap the under-console engine and ABS control modules in heavy-duty plastic and tape (see point 4). This will prevent damage from heater matrix water leaks, which are almost inevitable at some point in the car’s life. This way you only suffer from damp carpets.

Some owners find the brakes a bit marginal, especially if you make full use of the more powerful V6 versions. The solution is to upgrade to Brembo or HiSpec four-pot caliper conversions with larger-diameter discs for just over £1000. It’s easy to return the car to original if you ever want to.

The V6 is eminently tunable, but that’s far too complex a subject to go into in the space available here. The accepted bible on the subject is The Alfa Romeo V6 Engine High Performance Manual, published by Veloce.

Best car in this days in E+saloons

Vojtěch Ondráček
There are no comments posted here yet