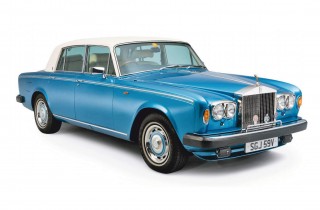 2 £15k-£20k buys a decent saloon. The split between Series I and Series II is pretty balanced in terms of availability and demand, so values are determined by condition. Low- mileage cars carry a significant premium.

Prices of Silver Shadows and their Bentley T-Series counterparts are sliding back towards pre-boom levels – but don’t jump into the first one you find. Running costs are potentially stratospheric because of the car’s complexity, expensive parts and thirsty V8. These cars need regular expenditure and a seemingly innocuous problem could be very costly to fix.

Buy badly and you could be hit with large bills, but buy smart and you’ll own a piece of quintessential British craftsmanship that looks regal, is beautifully finished and is eminently practical. This guide pools the expert knowledge of Stephen Brown at Hanwells (hanwells.net), Paul Brightman at Royce Service & Engineering (rsande.co.uk), and John Neale of the Rolls-Royce Enthusiasts’ Club (rrec.org.uk).

R-R Silver Shadow I and Bentley T1: launched in 1965 with a 6230cc V8; a 6750cc unit was fitted from 1970. These earlier cars look more striking with their extra chrome bumpers but a steering box means they’re not as sharp to drive. A long-wheelbase option arrived in 1970, while the track was widened and larger tyres fitted from 1974 – these cars have flared wheelarches.

Silver Shadow II and Bentley T2: introduced in 1977 with rack-and-pinion steering, rubber bumpers and many smaller changes. The LWB saloon was renamed the Silver Wraith II. In 1981 the Silver Shadow and Corniche FHC were killed off; the convertible survived as the R-R Corniche/Bentley Continental until 1995; the two-door Bentley was called the Corniche till 1985.

The Silver Shadow was Rolls-Royce’s first monocoque car; its whole structure is made of steel so corrosion can be a real problem; flared-wheelarch cars are more rust-prone than the predecessors. The sill ends can be replaced for around £500 per side if tackled early, but leave it and full sill replacement costs £3000 per side.

‘The Shadow II is better to drive, with its more modern steering and suspension’ 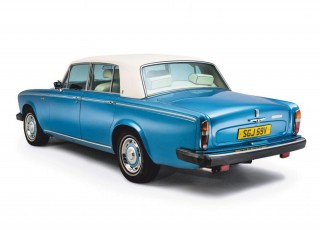 Check the chassis legs alongside the engine for buckling; they can get damaged in a front-end shunt and repairs can run to £20k. Corrosion is most likely in the rear wheelarches (£1500 to fix), but front and rear valances also rust (£1000). The aluminium bonnet, doors and boot lid can get creased, with decent used replacements usually the cheapest option; Flying Spares charges £125, £400 and £125 apiece respectively. Inspect around door handles and brightwork; localised repairs cost £150-£200 for each damaged area. The bootlid seals can fail leading to water ingress; the front and rear screen seals can also leak; they cost £150 (front) and £145-£180 (rear); with a new screen too it’ll cost £420-£620 (front) or £600-£1150 (rear). Fitting a screen is a specialist job priced at £300.

A huge boot and spacious cabin make the Shadow a practical extravagance. Just be prepared for potentially high running costs. Don’t underestimate the cost of trim on these cars – whether exterior or interior. A set of stainless steel front bumpers costs £1000; cabin timber refurbishment can cost three times that.

All of these cars got a V8 of 6230cc or 6750cc; they’re unstressed units so they’ll easily notch up 250,000 miles if looked after. With no annual anti-freeze change or the wrong fluid being used, the iron cylinder liners corrode. They then shrink, squeezing the pistons which is given away by knocking. Ask for proof that the correct Castrol/ICI anti-freeze has been used.

In the worst case, the engine needs a rebuild – it’s a choice between a decent used powerplant for £3000 or an exchange unit for £8000. Check the service history to see if the engine has been serviced each year or every 6000 miles. Make sure that the 96,000-mile service has been done; this costs around £3000 for lots of new hoses, fluids and filters. Specialists charge around £1200-£1500 for a 24,000-mile service.

Look for oil on the bellhousing which indicates a rear main bearing scroll seal leak; the sump and rocker cover gaskets can also weep. Budget £1200 to fix them.

Sumptuous wood and leather trim can suffer from water leaks. Electrics are generally reliable, although poor earths and brittle wiring are issues these days. The lusty V8s that power these cars can last up to 250,000 miles if looked after. Using the correct anti-freeze is vital.

The Opus electronic ignition system fitted from June 1975 causes problems when it overheats; a replacement is £370, (£180 for post-1976 units). Some owners fit a Lumenition system for £235 but, says John Neale, ‘I’ve known some owners have more problems with the Lumenition set-up than the original, with the latter not inherently unreliable.’

A replacement alternator costs £250; the brushes need to be replaced every 48,000 miles but rarely are. The radiator cools the engine and transmission, but the coolants are separate; a replacement costs £400.

All Silver Shadows came with an automatic gearbox; a three-speed GM400 unit in the first left-hand drive Shadows, while RHD cars got a four-speed GM Hydramatic fettled by Rolls-Royce. From 1969 all Shadows got the GM400 transmission. Problems are rare if the fluid is replaced every 12,000 miles and the filter every 24,000 miles. Rebuilding a badly neglected transmission will cost £1300 for the three-speed unit, £3300 for the four-speeder. On later three-speed cars the transmission coolant pipes run alongside the gearbox to the main radiator and these can corrode; if a pipe bursts the gearbox will be drained in seconds, wrecking it – budget £500 for a new set of pipes.

The self-levelling hydraulic braking and suspension system is effective, but maintenance and repairs can be expensive. The hydraulic fluid should be changed every four years (£1200-£1500); check its condition and level by looking through the sight glass on the side of the reservoir, on the nearside of the engine bay. There are two large rear subframe mountings plus four cushions (‘Brillo pads’) for the rear subframe.

These age and distort; replacing everything costs around £3000. Front suspension bushes can also give problems and the ball joints can wear. New ones cost £200 for the lowers and £250 for the uppers.

The Shadow I’s recirculating-ball steering box wears and a rebuilt one costs £600. An exchange steering rack is £500, but a box can’t be swapped for a rack. The power steering belts can break (£25 each new); squeeze the gaiters to ensure they’re not full of power steering fluid, as the rack can leak internally, necessitating a rebuild. The six ball joints in the steering system also wear, with new ones costing £150-£270 each.

The hydraulic braking system is relatively complex; two brake pumps maintain pressure, so use the brakes hard to ensure everything is working correctly. Check that no dash warning lights are lit up (but the wire can be disconnected from the sensor, so check the warning lights illuminate when you switch on the ignition). Removing the rear discs requires special tools; a pair of discs costs £300 and a pair of rebuilt calipers is another £600, with specialists charging £800 to do the work.

Predictably a full interior retrim is costly but a skilled trimmer can usually match the leather and just replace specific sections. A set of new lambswool rugs costs £725, but tired wood trim is less straightforward because patching isn’t generally possible – and an overhaul to factory standards is £2000-£3000 depending on how much work is needed.

The exterior brightwork is generally expensive to replace, so ensure that it’s all present and undamaged. A three-piece set of stainless steel front bumpers costs £1000; the radiator grille can split along its soldered edges and exchange replacements are around £2000. The electrics tend to be reliable, but there are lots of servos, motors and relays, so check that everything works. It’s all available and parts tend not to be costly; but labour to diagnose and fix a fault can be.

Air conditioning failures aren’t unusual. A new compressor costs £420-£735, but on a Shadow II make sure its heater matrix isn’t leaking; this is betrayed by anti-freeze staining on the footwell carpet. Replacing the matrix is an involved job – new ones cost £175 – and because coolant will have leaked on to the climate control circuit boards, a new pair will be needed at £250. All in, the bill is likely to run to £1500.

‘We have owned our 1980 Silver Shadow II since 1988 and it has covered 51,000 in our hands. Many of those miles were racked up on European rallies with the RREC; long-distance cruising is the Rolls-Royce’s forté and the atmosphere within the club is extremely friendly. ‘Keeping the car up to condition hasn’t been an especially costly exercise. On a run we get about 15mpg, but using the air-con knocks 2-3mpg off this. The aircon has needed some work and the starter motor has had to be replaced, but very little has been needed really.

‘Our car is garaged, but rust is inevitable; we’ve spent money on the scuttle and wings keeping it at bay. With this approach we’ve spent as much as £3000 in a year and there was a one-off cost of £6000 to overhaul the engine bay, but a £400 annual service is often all that’s needed so our average annual expenditure is very good value at £1000-£1500.’

‘I bought my 1979 Silver Shadow II in 1991, having previously owned a Shadow I. I’ve never been let down by either car, although the Shadow II has had a much easier life as it’s done just 86,000 miles, including 51,000 with me, mainly on European rallies with the RREC. ‘The Shadow II wasn’t quite as well made as the Shadow I, but it’s better to drive with its more modern steering and suspension. I do much of the maintenance myself. It’s much easier than you’d think, although regular use is key to minimising problems. Often the biggest issue is finding someone who can accurately diagnose a problem and fix it – I’ve had aircon and central locking earthing faults that have taken longer to sort than they should have done, but I still average only £1000-£1500 per year to keep the car running.’

‘I bought my 1976 Bentley T1 five years ago, having bought an S1 in 1988. While the older car is quite old-fashioned, the T1 is utterly usable with its aircon, cruise control and two-speed wipers. ‘I do all my own maintenance and parts can be surprisingly cheap; used and reconditioned bits are available from Flying Spares, and some good-quality pattern parts are available. There’s also some interchangeability; front brake discs from a contemporary Ford will fit, for example. My T1 has an LPG conversion; there’s no perceptible difference running on petrol and LPG, and there’s still plenty of boot space, even with the 100-litre fuel tank installed. It costs less to run than my XJ8.

’Values for the saloon-body cars have been pretty much static for some time and show little sign of moving skywards in the next few years,’ says Peter McIlvenny of specialist classic car insurer Carole Nash. ‘Convertibles have however seen their values rise in the last ten years but now seem to have plateaued. As with many classics, values can vary wildly depending on condition; solid service history is a must – especially for the rear suspension – and it is vital this is kept up to date. With high service costs and a tendency to rust there is no such thing as a cheap example. However, if you’re prepared to play chauffeur, these cars are as popular as ever as wedding cars with the right insurance cover.’

One Rolls-Royce for sale

Finished in Antelope with Tan hide and brown interior piping. Showing 60,000 fully documented miles with a full service history file that includes the original handbook folder, fully stamped service book and factory build sheets that detail the construction and testing of this car. Interior is in exceptional original condition with original Blaupunkt Radio and Pioneer cassette player, and lambswool over rugs.