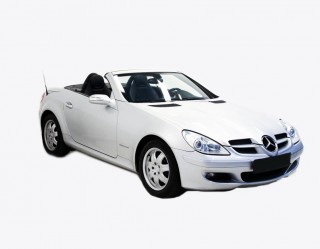 Buyers' File: Mercedes-Benz SLK MKII 2004-2011 (R171) The miniature SL offers grace and pace for not much money – here's how to buy the very best. The Mercedes-Benz SLK R171 is an inexpensive way into drop-top Mercedes-Benz ownership – and may cost less than you expect.

When it comes to buying an inexpensive convertible, the ever popular Mazda MX- 5 is often the first port of call. However, if you want something with more cylinders – or creature comforts – it’s worth looking at the second-gen Mercedes-Benz SLK. While admittedly not as engrossing to drive as the aforementioned Mazda, or rivals such as BMW’s Z4, the compact rear-drive convertible has its benefits. A wide array of engines are available, including supercharged 1.8-litre petrols and naturally aspirated V6s and V8s, some of which were offered in conjunction with a manual transmission. The folding hard-top roof also grants more security and refinement, which may prove beneficial to many.

It’s also comparatively affordable. Four-cylinder versions start from around £2500, while good examples of six-cylinder cars and full-fat AMG variants can be had for around £5000 and £13,000 respectively. More to the point, regardless of which you go for, it may prove surprisingly trouble-free. That said, there are still a few key things to look out for.

The 1.8-litre four-cylinder engine in the SLK 200 may be dependable, but a little caution is required. ‘We do see some with stretched timing chains or worn cam gears,’ says Steve Garlick, director of Independent Mercedes-Benz specialist Stevensons. ‘Like any car, regular oil changes are essential.’ Check for oil leaks from the variable valve timing assemblies too, as the oil can work its way into the wiring harness and ultimately damage the ECU – but everything can usually be cleaned and repaired, rather than replaced. A preventive fix is available in the form of a three-inch ‘starter line’ that protects the rest of the harness. V6 variants are reliable, with the only common problembeing the failure of the emissions-related secondary air injection pumps. The SLK 55 AMG is similarly stout. ‘It’s an absolutely fantastic car,’ says Garlick, ‘and has a really good, solid engine.’

The automatic transmissions in SLKs rarely suffer from major issues but be wary if one with the 7G-Tronic gearbox is sticking in third – as it probably needs a new speed sensor that will cost from£750-£1500 to replace, depending on the particular version of the transmission in the car. If you’re in the market for a manual, it’s worth looking at the V6 variants; Garlick states that they’re particularly pleasant to drive, and the most well balanced of the SLKs.

‘We do quite a few rear springs on them,’ says Garlick. ‘They only seem to break the Bottom three inches off the spring; the usual complaint is a little rattle over speed bumps, which is caused by the bit of spring floating around in the lower suspension arm.’ Budget around £150 per side for a genuine replacement spring and about an hour’s labour. You might also come across cars that need the odd anti-roll bar link or a replacement lower front suspension arm, but major problems are uncommon.

This is one area in which the SLK differs from the Mazda MX-5 in an entirely positive way. Their corrosion resistance is refreshingly good. ‘Other than poor previous bodywork repairs,’ says Garlick, ‘I’ve not seen any structural problems at all – I’ve not seen any of them have a rust issue.’

Even the roof mechanism of the Mercedes is durable and, beneficially, less prone to leaks than the larger SLs. ‘I’ve only ever had to put one roof motor on one,’ says Garlick. Do inspect the drain points, particularly the one in the battery tray, and especially if a car looks like it’s been parked under a tree.

The braking and steering systems in the SLK rarely present any real issues, in part because many of the components come from larger, heavier cars. ‘They’re quite reliable,’ says Garlick.

Do cast an eye over the consumable elements, though, just in case they’re coming up for replacement – if they are then it could prove a useful haggling point. The parts aren’t excessively costly, though; a new set of front discs and pads for an SLK 350 can be bought for around £140.

Don’t forget to account for tyre condition, too, particularly if you’re looking at an AMG.

‘We have replaced, more than anything else, heater control panels for the air conditioning,’ says Garlick. ‘When they go, there’s just no output from the control unit – you turn it on, it says its on, but there’s no output.’

Make sure you carefully inspect the seats for any signs of damage, particularly the outside bolster on the driver’s seat. Otherwise, the interior of the SLK is generally quite a hard-wearing affair. Keep an eye out for cars with the Airscarf system incorporated into the seats, as this does improve comfort when driving with the top down.

‘I’ve had a ‘V8 itch’ for years, but didn’t want to scratch it with anything large or complicated, so settled on a 2005 SLK 55 AMG about 18 months ago. It doesn’t have the tricky ABC suspension and the M113 engine has a good reputation. There are better-driving rivals out there – the inert steering being the biggest downside – but it handles pretty well, rides nicely and the engine sounds glorious with the roof down. Try to get one with as much service history as possible and check all of the brake discs – the AMG ones are very expensive to replace.’

A range of engine tuning options are available for all versions of the SLK. Take the more powerful post facelift SLK 200, which produced 181bhp, for example: specialists Celtic Tuning offer a remap that ups its output by 20bhp and 20lb-ft, helping it feel that little bit livelier. The claimed gains for the AMG variant are even more significant, with its 355bhp and 376lb ft climbing by 41bhp and 44lb-ft respectively with a ‘stage 1’map.

On the handling front, you can opt for upgraded suspension set-ups from companies such as Bilstein. Its B12 Pro-Kit suspension package, described as ‘the perfect combination for sports and fast road cars’, costs around £750 and includes new dampers and springs.

A wide array of upgraded disc brake and pad combinations are also available, including grooved and dimpled front and rear discs from EBC – which cost around £250 for a complete set for 200 Kompressor variants.

Unsurprisingly, though, few modify their SLKs. ‘I don’t think we’ve ever put anything other than a phone kit upgrade in one,’ says Garlick.

Heater control panel is a weak spot. V6 clutches can be too light for some.

‘We love the second R171 SLK which was much improved over the already capable first-gen roadster. It might not be as engaging to drive as a Boxster, but it does have a metal folding roof. Many SLK owners use them as second vehicles so can often enjoy an insurance discount by covering a limited mileage.’

Policy £370.06 or £388.06 with agreed valuation, with a £500 excess, comprehensive. Quote based on a 39-year-old self-employed person with no points on their licence, living in Peterborough. Car is garaged, 3000 miles per year and with comprehensive cover.

Disclaimer: Policy benefits, features and discounts offered may vary between insurance schemes or cover selected and are subject to underwriting criteria. An additional charge may be payable.