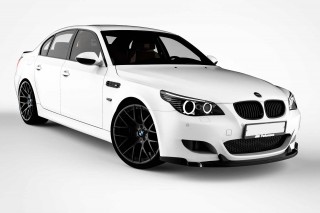 E60 M5 Powerhouse Buying BMW's super saloon. Fifteen years after it went on sale in the UK, BMW’s E60 M5 saloon remains a tempting prospect. But, with huge bills a very real possibility, what do you need to know in order to buy a good one? Words: Simon Jackson. Photography: Hexagon Classics.

First revealed in concept form at the Geneva Motor Show in 2004, believe it or not the E60 M5 arrived in UK showrooms 15- years ago this May. The naturally aspirated 5.0-litre V10 saloon was an instant hit. Unquestionably a technological tour de force, this was a BMW super saloon that was at ease pottering to the shops, but equally comfortable driving flat-out on a de-restricted stretch of Autobarn. 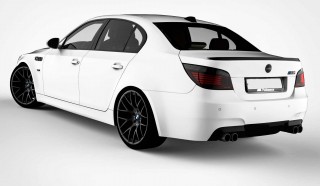 Developing 507hp at 7750rpm and 383lb ft 6100rpm, it reached 62mph in under five-seconds, the drivetrain used to propel it to such heady heights could draw genuine links to BMW’s Formula One operation – kudos indeed. In fact, at the time, the S85 V10 petrol unit was the most powerful road car engine BMW had ever made. Working in conjunction with a seven-speed SMG transmission, one able to change gears in just 65 milliseconds, the setup was a masterpiece, delivering earth shattering performance for the era. The rest of the high-tech advents here were just as impressive; three-way adjustable electronic dampers, a host of driving aids (including three-stage DSC), head-up display and eight airbags. Options included multi-function seats with active side bolsters and front seat ventilation, it was all cutting edge stuff in 2005, but today, 15 years later, it is also somewhat worrisome. After all, any of these systems failing through age could lead to bills large enough to eclipse the sun. But, with prices for the cheapest of these cars today starting at just £12,000 – there’s the potential to own an awful lot of BMW M saloon for not very much money. So, exactly what are the concerns for potential E60 M5 owners to balance between their head and heart? Let’s find out...

It’s well documented that early examples suffered with Vanos oil line leakage, but you’d expect all cars to have had these replaced by now with alternative pipes. Sticking with the Vanos system, pumps, solenoids and sensors can fail, in fact this is likely to be your most frustrating issue due to the complexity of the setup – check for Vanos warning lights. The throttle actuators can cause a problem too and are not cheap to replace – a rule of thumb with the E60 M5 is that parts are expensive! General oil leaks have been known, on the subject of oil, if changing intervals are missed then rod bearings can fail – expect consumption of approximately one-litre every 1000-miles. Obviously check for signs of overheating during your test drive. Go through the service history with a fine tooth comb, a major service (around £1500) is required every third oil service.

The SMG gearbox is not your friend. Yet later cars benefit from the SMG 3 gearbox which is said to be more reliable than the SMG 2 unit. SMG pump failure hits the early cars but BMW redesigned the part at the end of 2006, earlier cars should have had this replaced under warranty. SMG control units and clutch position sensors are also known issues, the (single) clutch though is the biggest expense – these last for about 40-50,000-miles.

There’s no way to work out if the ‘box is about to fail, though those treated harshly with regular use of launch control are more likely to suffer from problems with clutches, so too cars used mostly in town – cars with high motorway miles can eek a clutch out to 100k. Check the paperwork to see when the clutch was last replaced, at a specialist budget around £2500 for a new one. Clutch release bearings and guide bush overheating and seizing is something else to be weary of – both are gearbox-out jobs. A completely fresh gearbox is around £6000. Don’t panic if you hear a grinding or scraping sound from the diff when turning at slow speed, it’s friction between the lined disc and steel disc – it can be cured by changing the diff oil. Any misting on the diff could be the oil seals – new ones aren’t dear to purchase.

Aside from the usual consumables and the cost of having a set of 19-inch rims refurbished if there’s any damage to be seen, the only real issue in the wheel, tyre and brake category is the cost of brake components. Front pads and discs cost £850.00, rears £500.00. As these cars are getting on a bit now so check for worn suspension, as you’d imagine replacement bits aren’t cheap and if things are really bad it could indicate that the car has seen a hard life.

If there are lights on the dash it could just be a failed steering angle sensor, knocking from the front suspension might be a loose front strut cross brace or worn anti-roll bar links, so that’s not too bad. A vibration through the steering wheel or a noise from the front while cornering is likely the front control arms, these aren’t too costly at all.

The Electronic Damper Control (EDC) system means that new front shocks are £710.00 each, rears will set you back £600.00 each – with labour you’ll be looking at well over £3k to replace the lot.

Unfortunately the E60’s interior does not wear particularly well. Check the fit and finish of trim panels and the level of wear to the leather – active seat bolsters can squeak which is annoying and tricky to sort.

The iDrive system can cause problems too, if it fails the hard drive could be at fault – a new one is £700.00 (exchange), this is bitter sweet as it does give you an opportunity to update it to the latest software if this hasn’t already been undertaken. Presuming it all works well, check the condition of the Based Servicing menu in the iDrive to see if anything is due shortly on the car in question. Steering wheel paddles should respond instantly, if not the microswitches may have failed.

Check everything electric inside the car – including the seat adjustment, wiring faults are not much fun. Any wind noise from the windows, doors or sunroof could be driedout seals – BMW issued a service bulletin on sunroof maintenance. Air-conditioning systems can suffer from blocked microfilters, blower motor and sensor failure.

It’s the usual stuff here, these are high performance cars so check carefully for accident damage – examine panel gaps and paint match from panel to panel. There will likely be stone chips to bonnet, exposed panels and headlamps but just how bad are they? Check that the headlamps are not misted, that the electric mirrors fold and the parking sensors are functional. Happily rust is not a major issue but all the same check the typical places. Parking knocks and scratches might not be deal breakers depending on your personal view. If your finger nail doesn’t stop as you run it down across a scratch then the general rule of thumb is that it will polish out. A machine polish can cost upwards of £200 depending where you go – local or mobile paintless dent repair specialists are a good tip for a low cost machine polish option.

There are plenty of horror stories out there from previous, and current, E60 M5 owners. However, this was a technologically advanced high performance machine when new, it remains so today and that comes at a cost. There’s no escaping that running costs will be high, the E60 M5’s 70-litre tank being good for about a 200-mile range, the servicing costs we’ve covered. Yet it is not any more expensive to run than any prestige car with this level of performance – lest we forget this was a £61,755 car when new, the equivalent of £92,905 today, if you were to buy it tomorrow you shouldn’t expect the running of a near £100k vehicle to be inexpensive.

Buying an E60 M5 that is not looming up on a huge service will help, if you’re unlucky and cop a big service (including brakes and tyres) you could be looking at a £5000 outlay – ensure that doesn’t faze you before considering one of these cars.

Problems aside, this best-selling M5 really is a fantastic car, one of BMW’s best and arguably a modern classic. And that’s certainly what Hexagon Classics, the London specialist offering this car for sale at the time of writing, believe. This 2005 Interlagos Blue Metallic example has driven just 8850-miles from new in 2005. It was being advertised at £33,995 and has to be one of the best in the country: “After representing BMW and MINI in London for over 40 years, Hexagon has seen some fantastic examples of pre-owned M Power cars, this particular E60 M5 is up there with the very best of them,” said Hexagon Classics’ Jonathan Ostroff.

“Supplied in September 2005 by BMW Holland Park, the M5 has had just two private owners. It boasts nine BMW main dealer services, including the all-important running-in service in October 2006 – this M5 has literally wanted for nothing in terms of its regular maintenance.” What a car...

Later cars benefit from the SMG 3 gearbox – said to be more reliable than the SMG 2 unit...