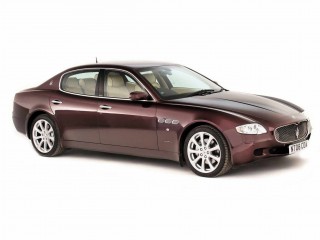 It may feel nearly new, but this Maserati seems to be the default modern saloon for classic car enthusiasts who love the looks, the badge, the performance, the handling and the luxury. Ten-year-old examples are available for under £15k, many with very low mileage and full history, but there are choices and pitfalls. Prices and availability of parts from Maserati are scary, so keep a few thousand pounds in hand for unexpected repairs. It’s well into top UK road tax bracket territory too – £535 per annum, or £305 if registered before March 23, 2006. 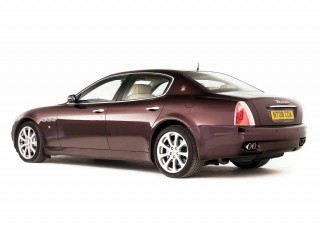 There are two engines and two transmissions – both V8s are great, but the transmissions are chalk and cheese – a paddle-shift electro-manual with crude auto functionality or a super-smooth ZF auto that some say takes all the fun out of the car, while others claim it’s far better suited, especially with optional paddle-shift. Check options, because these were plentiful.

Helping with the choice are Dave Smith from the Maserati Club, Andy Heywood, MD of McGrath Maserati, who has been steeped in Maserati for 30 years and runs his own pre-facelift ZF QV, and Myles Aldous, Director, Maserati Technical at Emblem Sports Cars who’s worked on Maseratis for 25 years. Which one to choose?

1 QP V 4.2 On sale in 2004 with the 395bhp 4244cc Ferrari-derived V8 and DuoSelect automated six-speed manual gearbox. It hit 60mph in 5.5sec and topped 170mph, returning 10-20mpg. The chrome grille had horizontal bars and 18in alloy wheels were standard. The six-speed ZF auto offered from the start of 2007 gave little-changed acceleration and a slightly lower top speed. The range was facelifted in spring 2008 with a revised grille, new headlights and a more prominent swage line; the DuoSelect ’box and Skyhook suspension system were discontinued. QP V production ceased at the end of 2012 with 25,256 built.

3 Sport GT Also added in Sept 2005, electronic tweaks gave a 35-per-cent quicker gearshift and firmed up the dampers in the Skyhook suspension. A sports exhaust, cross-drilled brakes, seven-spoke 20in alloys added to the impact, along with a special steering wheel, alloy drilled pedals and carbon-fibre trim. From April 2008 the Sport GT became the Quattroporte S, with 424bhp 4691cc engine giving 5.3sec 0-60mph and 174mph.

Structure Bodies are mainly steel, with aluminium bonnet and bootlid skins which suffer electrolytic corrosion against the steel frame inside when condensation forms. Boots can get wet inside because of poor wheelarch sealing. Check that the bonnet safety catch functions. Underneath, corrosion attacks front and rear subframes, with holes right through the front subframe even at six years old, especially the crossmember between the top wishbones. Replacing the whole subframe is £5000-plus if you can find one, so specialists usually weld in a new section for £500.

Engines The all-aluminium V8 has four valves per cylinder and generates 333-361lb ft of torque. On all, but especially ZF-equipped pre-2010 cars, listen for rattles from the timing variators on cold start and overrun – there was a factory ix for the early ZF cars but not all had it; it would cost £3000 to do now. On others it will need new variators – budget £1800 per side. Cam covers can leak oil onto the exhausts, and rubber pipes deteriorate. On DuoSelect cars check the low-mounted water pump for any green weeping from the hole in the front, indicating impending failure. Pre-facelift the service interval was annual (minor service £625), post-facelift every two years (minor service £1150), though specialists recommend an annual check. The major four-year services are £1700/2200 for pre/post-facelift cars.

Transmission and suspension Driven hard or primarily in auto, the DuoSelect has quite an appetite for clutches, which generally require changing by 40,000 miles; it can be as low as 25k with a lot of town driving, or 65k-plus with sensitive changing (the driver lifting the accelerator as it selects). Maserati diagnostics give a wear indication – they’ll need doing soon if 65-70 per cent worn; or immediately if it jumps out of reverse. Replacement costs £2000. If the gearbox is noisy or slow to change, the hydraulic gear selectors may be failing, resulting in a £2500 bill.

The twin-wishbone suspension on most cars featured Maserati’s Skyhook dampers, enabling the driver to select Normal or Sport from the dashboard. This was abandoned in favour of permanently firm damping on Sport and GT S models. If Skyhook is fitted, check it works because shocks are costly (£1800 a pair – Maserati won’t sell them singly) and listen for creaking that may indicate worn or seized bushes. Check for broken springs and leaking dampers; clonks may be from failed dampers, failed bushes (including anti-roll bar drop links) or broken springs.

Brakes These get a hard time because the QP weighs almost two tonnes, so pads last 20-25k miles and discs not much longer. Check the inside of the discs, which will be in far worse condition than the outside. On most models, quality aftermarket parts are much cheaper than factory, but there are at least eight different specs, and on some like the GT S you’re stuck with costly factory discs and pads. The electronic handbrake on ZF-equipped cars can stick, especially if put away wet – the bill for getting new shoes and cables fitted will be around £1100. 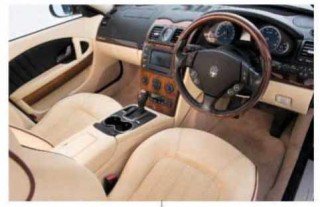 Electronics They’re complex and the battery will go flat if inactive for two weeks and not kept on charge. If the car has been sitting around too long – especially in damp, non-temperature-controlled conditions – the electronics will suffer, so low-mileage cars may have more malfunctions than regularly-used cars. Check that it has a recent 800-amp-plus battery. Ensure that door mirrors fold in and out promptly, check the bootlid soft-close action, tyre pressure monitoring (£600 a set for new ones) and rear parking sensors (£150 each, plus fitting – a bumper-of job on post-facelift cars). With warning lights for many items an MoT failure, don’t accept a vendor’s assurance that it’s ‘nothing to worry about’. A frequent ABS warning light can mean wheel speed sensor corrosion – they’re integral with wheel bearings and cost £800 each fitted.

Cooling system and air conditioning The coolant expansion tank can split and slowly leak, with catastrophic effect if it’s ignored (there is no warning light for low coolant level). At £30 new, it’s worth changing if it hasn’t been done already.

Listen for a rattling from the aircon compressor. Look down in the engine bay and you may see the pulley wobbling; or with the car running, push the ECO button – if the rattling noise stops, the compressor is on the way out. A new one is £1500 plus fitting, but specialists like Emblem can it a recon unit for £1100.

Interior trim Check the leather/part-Alcantara trim, especially the parcel shelf leather – it can shrink in the sun. The reclining rear seats should work, as should the electric, heated front seats and electric windows. Window regulators fail – only a small piece of plastic breaks, but you have to replace the entire unit (£600). The plastic membranes behind the door trim panels can fail and allow water into the footwells – replacements are £23 each with £100 labour to it.

‘My first Maserati was a two-year-old 222SE in 1995,’ says Peter Cockle. ‘I loved it to bits, but sold it on after two years over ownership to avoid suffering excessive depreciation. Then I had a Morgan 4/4 for 10 years, but my wife didn’t like it and suggested another Maserati.

‘I found this car in Middlesbrough in February 2015 – it was in superb condition. It’s a 2008 4.2 Executive and had just 30,000 miles on the clock. My son, who’s better at negotiating than I am, struck a good deal. The two previous owners had suffered serious depreciation – this was a £100k car new with all the fancy extras.

‘It’s up to 39,000 miles now and I’ve had no problems – except that electronics are the new rust. I keep getting ABS fault messages, but turning the car of and on again clears them. Living on the outskirts of London I go to town by train, so use the Maserati for longer runs.

‘There are some nice cars in my neighbourhood, but my neighbours love the Quattroporte – it’s got grunt, it’s got sex appeal, it’s got design lair and it puts a smile on your face. That’s why people like Maseratis so much.‘

‘I bought my dark blue 2006 Executive GT four years ago,’ says Andy Stokes. ‘I’d wanted a Maserati since I was a young lad, and I’ve loved every minute of it – it’s my unsensible family car! ‘I’ve had two Citroën DSs, a Jaguar Mk2 and a VW Type 2 pick-up in the past, but this is a two-ton car that drives like a Mini – a four-door Ferrari that you can go on holiday in with the family and all their luggage.

‘The power is unbelievable – it goes like stink and the V8 sounds fantastic, better than in its Ferrari incarnations. I bought a car that had a fanatical previous owner and it gave no trouble for two years. The biggest cost I’ve had was the aircon pump which is a Ferrari part that costs £1500; fortunately many parts can be found from other applications, like the parking sensors – I found that Alfa 159 items it, and they cost just £11.99!

‘Warning lights can scare the life out of you if the battery’s run down – but get it charged up properly and they will reset. You do need a specialist with a Ferrari SD3 code reader to look after it; I’ve taken mine up from 45k to 64k miles and it’s cost around £2000 a year to run. ‘I love the driving experience with the DuoSelect – it needs more driver input, like lifting as you change gear.’

‘I’ve had two Quattropore Vs from new,’ says Chris Green. ‘The first was a 2006 Duoselect Sport GT. I actually loved the slight eccentricity of the automated manual gearbox and its tendency to ‘lurch’ when changing down.

‘The Sport GT was a much stiffer car and more fun to drive than the standard 4.2. I had no problems over five years apart from the seal membranes going on the front doors, an easily solved and inexpensive issue. Whether an early Duoselect or a later, more reined Quattroporte V with a full automatic gearbox, long-distance motoring is comfortable, enjoyable and relaxing.

‘I have many fond memories of the Duoselect, but traded it in early 2011 after 36,000 miles for the best Quattroporte of all time – the Sport GT S, which I will keep. In my opinion it was never surpassed, including by the current model which I personally would never own. ‘The car’s balance under loading in corners is excellent, with little body roll or weight transfer. The ride is harder, but not uncomfortable. The gearchange time was improved and the slight increase in power is noticeable when driven hard.

‘The car has been very reliable over the last seven years and 38,000 miles apart from – yes – the same door membranes, which were replaced after they failed in three of the doors. I now keep spares at home for the future. As servicing is every two years, it works out at £900-£1000 per year on an annualised basis.

‘I think it is a great car – a reliable luxury driving machine with a definite soul of a Maserati.’

‘Classic car enthusiasts love the looks, the badge, the performance, the handling and the luxury’

4 A low-mileage Sport GT S can be found from around £28k, with up to £35k being asked for the best examples. 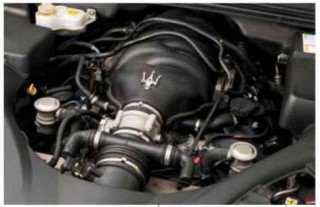 Complex electronics and luxurious trim all need to be in good order, including the refrigerated arm-rest cubby.

Although the QP V hasn‘t been around all that long and the bodywork may look pristine, you need to check for corrosion underneath. The front subframe can rot through within six years, so a car with a properly rust-protected underside is a real find.

The Quattroporte has a lot going for it. It can transport four adults in sumptuous comfort and is powered by glorious-sounding V8s with Ferrari input. There’s also a lot that can go wrong, so enthusiast-run cars are your best bets.