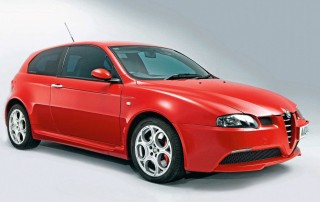 Alfa Romeo 147 GTA Alfa’s Chadwick-approved steroid hatch is coming out of the price doldrums – so act now to avoid disappointment.

Expert buying advice to help you choose your perfect car

The firm was on a roll in the early Noughties, making good on ancient platforms by stuffing in Busso V6s – and letting aggressive styling (and later limited-slip differentials) take up the slack.

Alfa’s response to the escalating hot hatch wars of the era ended up as the most powerful car in its class; what it lacked in finesse it made up for with 247bhp of Busso V6 grunt and palatial equipment levels. A far   cry from the stripped out, track biased GTAs of the Sixties and Seventies, perhaps – but among one of the best ways of sending front tyres up in smoke that the critical press had ever seen.

A cottage industry of improving the base materials means that sensibly upgraded examples hold a premium over bone-stock cars. Done right they make a good car great. Having weathered the financial storm, and with the worst examples now gone, the classic market is free to embrace a GTA that almost anyone can still afford.

Major work, such as replacing the cambelt, clutch, exhaust or water pump, necessitates the engine being taken out of the car. Luckily, in use, the 3.2 stays the course – but be prepared for big labour bills to keep it sweet. ‘Engines are bulletproof, really,’ said Avanti Autos’ Mario Lavergata. ‘We usually state five years or 60,000miles for camshaft drive belt renewal. Some engines suffered from water pump-failure; their impellers are made of plastic and break, stopping the coolant from circulating. Mario tells us that this is a rare fault now, as most running GTAs will have had their plastic impellered units swapped for one with a metal equivalent – such as a unit from a 3.0 litre GTV (916). ‘This is normally done on the first camshaft drive belt change.’ You’re into a lot of labour just to get at the water pump; it’s driven off the aux belt but replacement requires cambelt removal.

The engine also likes to Chew Mass Air Flow (MAF) sensors – they last around 70k miles. Rough running is normally a clue, and when they’re on the way out the engine management light will start raging. The engine bay gets hot in use, making life hard for the ECU; they can melt. Repair either involves soldering in new capacitors, or outright replacement, and they’re hard to source.

‘The differential can be a problem,’ says Mario. ‘These cars were sold without a “slipper” and we have seen a few of these expire when driven “enthusiastically” which usually ends up destroying the gearbox too as the blown diff punches its way through the gearbox casing.’ Alfa built its own limited-slip differential known as the Q2, which is no longer available but Quaife makes one. Not only will the engine and ‘box last longer with a Q2 fitted but it will also get the power down better. Clutch release bearings have also been reported as a weak point; a creak as you dip your left leg in and out normally means they’re not long for this world. Clutch slave cylinders like to leak, and clutches last 50k to 60kmiles. Replacement involves taking out the front subframe, dismantling most of the front suspension, and some of the rear exhaust manifold.

A few issues here, most of them age-related. Mario says: ‘On older cars there’s a known problem with the rear suspension McPherson struts. Water sitting in the spring cup Can weaken the spring plate until it detaches from the damper and pushes the suspension down.’ The spring will end up fouling the tyre. The engine’s weight means GTAs can wear their upper and lower suspension arm-bushes out. Don’t bother with cheap alternatives, says Mario: buy OE-specification TRW items.

There are some rusty 147 GTAs left on the roads, but it’s mostly down to neglect (and thin gauge floor pans). ‘The factory anti corrosion peels away from the floor after a certain amount of years,’ says Mario. ‘This leaves the floor pan exposed to the elements; we usually check these during a service.

‘It’s usually only a matter of cleaning the loose anticorrosion protection, we then paint a rust converter on to the floorpan and re-underseal when dry.’ Make sure the legs supporting the bumpers are in good shape, too.

No real issues on the tiller front, but you’ll have plenty of fun with the brakes on pre-November 2003 cars; they were fitted with 305mm discs at the front which were prone to warping. Later cars went up to 330mm rotors which were far more resilient.

Electrics have held up better than you might expect: airbag sensors can suffer if people have been too rough pushing seats back and forth, and body computers, now either NLA or pushing £800-£900, can cause havoc if they break. Basically, you can unlock the car, but you won’t be able to start it if said computer’s dead – as it won’t send the correct signal to the immobiliser.

Andrew Evanson, senior operations manager of Lancaster Insurance, reveals the benefits. ‘Alfa has the “X-factor” – the combination of rich heritage, the beautiful styling and the charisma of those engines. The GTA version of the 147 is about all of those and they are becoming collectable. The GTA is a perfect example of a modern classic.’

I BOUGHT ONE MATT HEATH

I always wanted a 147 GTA because it’s a bit of a sleeper unless you know what it is. I will keep it for a long time because there are not many cars for the money that can put that big of a smile on your face. Paint correction or a full paint respray will be next; in two years of ownership all it’s needed is a back box and a power steering pipe, which I had to have made. My 2004 car was the first one that I went to look at as it had a full file of history with receipts for every part put on it. It’s a fair weather car, really; once it’s sorted I’ll be attending my local Cars and Coffee Liverpool meets in it.

A good compromise is finding a set of decent exhaust manifolds from a pre-catalytic convertor GTV6 (916) or a 164 V6. Either set will increase ground clearance and, more importantly, take as much as 20kg off the nose of the car. Some cat back adaption is required, but a specialist will be able to advise. They help the engine breathe better and resist the hot house ambient temperatures of the engine bay Assistant Editor and GTA owner Chadwick can’t emphasise a suspension upgrade enough – as it’s not really up to the task as standard (as his 1000-yard stare whenever his first trip on his favourite B-road comes up in conversation explains). Look at any car favourably with the likes of KW’s Variant, Bilstein’s B6 and upward, or Eibach’s ProStreet S fitted; so equipped, they help cover ground a lot quicker and arrest vague mid-bump histrionics.

Interior with plenty of room for tall drivers. Red paint can fade over time.

Quote based on a self-employed 39-year-old male with no points, living in Peterborough, Cambs. Car is garaged and limited to 3000 miles per year. Call 01480 587018 or visit lancasterinsurance.co.uk for your quote.

Disclaimer: Policy benefits, features and discounts offered may vary between insurance schemes or cover selected and are subject to underwriting criteria. An additional charge may be payable.

Nathan's been with Modern Classics since the start after working on Classic Cars and LRO. And, er, Veterinary Times...?