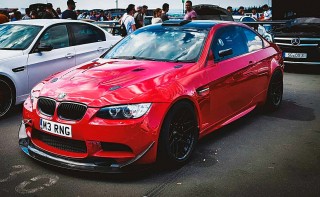 After the last outing at the ’Ring I knew something had to be done about the suspension and the way the car handles. Part of the reason for this is because the huge GT2 rear wing upsets the car’s balance – the amount of downforce it creates even at the flattest angle of attack is creating understeer on the front end at high speed. The only way to tackle this was to stiffen up the rear but seeing as it is already mega stiff on the springs, this would make the rear even more of a handful on track. Luckily the amount of downforce it creates counteracts the problem in the high speed stuff and makes it very stable but, as said, it then upsets the front…

So I had two options: either get a smaller wing to reduce the amount of downforce; or balance out the rear with more front end aero. I decided to go for the latter as I didn’t want to make the rear less stable to make the front a bit better. I would rather nail the front and the rear to the floor to create even more cornering force.

I spoke with Beat and we decided that a splitter extension and maybe some canards would be the answer to balance the aero front to back. This was all fine and well but the car has to run so low that anything I added closer to the ground would destroy itself after one lap! We made a template out of plywood and will be testing it on the next track day before making it in carbon fibre once we are happy. This means I will have to raise the car and set all the geometry and corner weight the car again but we didn’t have time for this on my last visit to the ‘Ring as I only had one day free day before the second and last German track day from Schnell Shwaben, so I don’t mind.

At the Shwaben event the car felt quite good but still unbalanced and it still had the high speed understeer. I had passengers with me for the first five laps getting the car up to temperature and the track conditions were lovely. It was set to be a great day. On the sixth lap I said to my passenger that I was going to go for a hot lap on my own as I had one lap left before refilling the tank so the car was at its lightest and fastest! This lap was a scorcher – it turned out to be a 7:38 BTG, my fastest lap to date! And I did it with traffic and a massive oversteer moment where I clipped a curb with my inside rear wheel at about 80mph. It wasn’t until I got about four or five corners down the line on a straight that I though ‘bloody hell that was close’!

Unfortunately after that lap I refilled the tank and every lap after that – 19 in total – were just full of traffic. On some laps there were accidents and live recoveries so you had to slow right down. Othger laps were just super busy. On the last three laps I got held up something rotten by a few 991 GT3 RSs on my flying second lap and by the third lap the tyres were past their best and were overheating. 7.38 was a good time but still above the 7.29 that I wanted to achieve on these tyres and this setup.

As there was a round of the VLN Championship at the ‘Ring a couple of days later I decided to stay on to watch and see what’s required for scrutineering and as Beat was racing he was able to equip me with a full access pass so I could get around everywhere. He made me feel very at home and welcome, as he always does. He has a number of beautiful road and race cars, all of which are BMWs, and this season him and his co-driver Andre are driving a 2006 E90 325i in the V4 production class for naturally aspirated cars from 2000cc to 2500cc.

The VLN is a great race series and the classes are structured very well. I won’t go into detail about all of the classes here but, in essence, the production class allows you to run a car completely stripped-out but it must retain all its original panels and glass and must have no additional aero aids. They must be as they came from the factory – brake callipers must remain stock, as should all of the suspension arms, pickup points, bushes, as well as the diff and all mechanical parts! You can change the shocks absorbers and springs to a coilover setup, you can use race pads and fluids, and you can run full slick tyres. The idea is that this keeps the classes very honest and the only major changes allowed are concerned with safety: a proper FIA roll-cage, seat, harness and fire extinguisher, but it’s pretty basic stuff. The atmosphere at the VLN is electric. Each pit box is shared by up to six cars and you get a real mix. For example, in the garage Beat was in there was the 325i, a Clio Cup car, two Aston Martins, and two 997 Kremer Porsche Cup cars. Next door were two M6 GT3s!

In Beat’s class there were 14 entries and the 325i qualified in sixth place for the race. This race was actually the second biggest race after the 24-Hours as it’s the summer special six-hour event and really pushes cars and drivers to the limit. Being one of the main events at the Nürburgring it gets quite busy and this race had 170 entries. Due to the large number of cars and different classes they can’t just let them all go at once so they split them up in to three groups with around 60 cars in each group.

The front-running cars will all go out, then a few minutes later the second 60 will go and then the final entries at the back. Everyone does a formation lap back to the start-finish straight on the GP circuit and then they are off racing down to the first corner. Unlucky for Beat, a few laps in, as I was watching down at the first turn, his car was hit by a faster car with a slower driver on board who seemed to have got frustrated behind the wheel. This damaged the side of the car and some trim and a side skirt were lost. But they battled on and came in every 12 laps to refuel and change tyres and finished a respectable seventh in class and 92nd out of 170 cars.

I wrote my last Longtermers report when I was on the plane coming home from Germany, but this time I am on my way back out to the ‘Ring for the last track day of the season and I’ll be bringing the car home with me afterwards. I wonder if I’ll manage to drop below that magic 7.29 barrier?

Ben E92 Cook has not set their biography yet