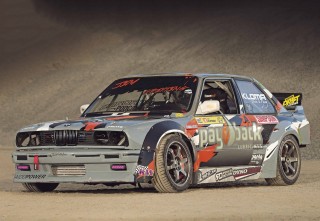 It’s a truism to say that drifting is quite popular these days. The origins of it all are well-documented, growing from the outlaw rambunctiousness of Japanese touge racers up in the hairpin-rich mountains after dark, and a large part of the sport’s popularity is the inherent tangibility of destruction and potential risk. People who aren’t particularly interested in motorsport (and, to be fair, plenty who are) tend to just watch races for the crashes, the mistakes; in a post- Jackass 21st century context of viral GIFs and YouTube fail compilations, things smashing into each other is invariably seen as more engaging than teams managing an efficient fuel strategy or foxing one another by switching tyre compounds at a surprising juncture. Plus it makes the highlight reels more shareable on social media. And therein lies the appeal of drifting – the very point of it is to destroy your tyres and cause a lot of smoky havoc, so every competitor is perennially on a knife-edge, milliseconds away from peril at any given moment. Every drifter is constantly midway through an accident. Generally they save it and transition into another almost-accident, but plenty of times they won’t, hitting the crunchy reality of a full-blown cock-up. Hearts are won by entrants who are good, bad, great or mediocre, which pretty much makes drifting unique as a sport. 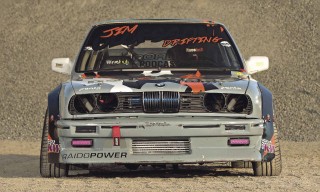 As the enthusiasm grows across all strata of the motoring world, it’s wholly unsurprising to find that drifting has a place in the BMW firmament. It’s not just Japanese cars that have a monopoly on smoky sideways hijinks – anything with power going to the rear can have a bunch of extra horses shoved into it with the aim of detonating rubber and generally making a mess. It’s got to the stage that people are blasé about huge power figures, so we need to be very clear about the car you’re looking at here: this E30 BMW is running 940 horsepower at the wheels. Just consider that for a moment. Nine hundred and forty. That’s more than a Veyron, once you’ve factored in the big Bug’s drivetrain losses. Or to put it another way, this retro Beemer is more powerful than two Ferrari F40s. Two!

With this sort of insane and border-line-dangerous obsession with power, you’d expect its owner to be something of a daredevil, wouldn’t you? A bit of a nutter? But no, Jim Olofsson is an impressively level-headed kind of guy. What does he do for a living? He’s an evangelist for motorsport safety. Well, that explains the colossally sturdy roll-cage we’re seeing here, and the tough harnesses, and the world-class fire extinguisher system. He may spend a lot of time looking like he’s on the verge of crashing, but imperilling himself just isn’t on the agenda: Jim’s E30 is all about going incredibly fast at extreme and precise angles, and doing so ineffably safely.

“The first BMW I worked on was my friend’s E30 323i,” he recalls. “We did a turbo build on that, keeping it street legal but really building it for racing.” And so the inspiration bottle was uncorked, and once that passion starts flowing there’s no way to dam it up again. The reason for buying the E30 you see here was admirable in its purity: “I just wanted to build the best E30 out there,” he says.

Now, ‘best’ is entirely subjective, and this BMW 3-Series is never going to win a rosette on a concours stand; it won’t have stance junkies drooling over its on-point fitment and it’ll raise eyebrows among the OEM+ show-and-shine crowd. But in the smoky crucible of drifting? Yeah, we’d say ‘best’ is a pretty safe term to start banding about. What really smacks you in the face from the off is the aesthetic. It’s brutal. You see, drift cars wear battle scars well; all race and competition cars do, really – but few carry off an aura of slight dishevelment with quite the carefree aplomb of those that have been specifically engineered to go sideways. While the nature of pointscoring in the sport encourages balletic grace and precision of movement, the fact that you’re hurtling at oblique angles and improbable speeds with a total disregard for tyre longevity means that, by simple consequence, the chances of hitting something are quite high; as we’ve discussed, the point of drifting is to constantly be almost out of control. 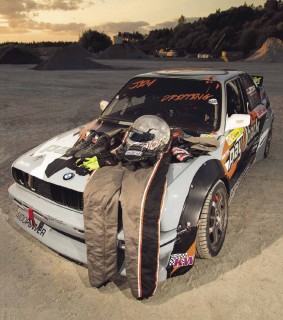 That’s why these machines look best when slightly beaten up. It proves that their helmsmen have been trying. What we’re looking at in broad terms, then, is a wilful and celebratory disregard for purity. The antithesis to the concours scene, in which every bolt-head must be artfully aligned and every part must boast the correct serial number. With drifting, fit-for-purpose is key, and this taster-menu approach has spawned a glorious mongrel scene over the generations – cars with the wrong engines, mucked about chassis specs, and fibreglass addenda stitched together with cable ties. Where Jim’s E30 stands out, then, is by virtue of the fact that as well as still having a period-correct, manufacturer-correct engine, the exterior is extremely tidy. Sure, it wears a fair few scuffs across its arches and quarters, but they’re entirely appropriate to the purpose. We’re not looking at an S-body Nissan with the rear bumper smashed off and beer-can dents along the full length.

The key to the exterior aggression is the VMR Customs wide-body kit, which adds a huge amount of presence to the once-slender E30 form as well as allowing the sort of broad track a slider demands. Rebew Design supplied the roof, bonnet and doors, which are all impressively lightweight items, so what you’re looking at is essentially a fat but light shell in which to house a hell-storm of power.

“The plan from the off was to build a competitive drift car,” he explains. “I bought it from a friend as a bare shell, and to be honest it was in pretty bad condition with lots of holes in the panels – but that didn’t matter, as we were starting from scratch anyway.” Being an ambassador for Payback Lubricants, it was also an inevitability that the car would be a showcase of incomparable engine strength, and looking under the bonnet you’ll spy a very impressive setup. The M50B25 is almost unrecognisable now, dwarfed as it is by a vast BorgWarner 9180 EFR turbo with twin Tial 44mm wastegates on one side and an imposing JHFab intake manifold on the other. Inside the motor reside custom Dynotech pistons and rods, while up top are Supertech springs (interestingly running with stock valves) and a whole world of fuel, thanks to the massive motorsport-spec 1580cc Bosch injectors. Cooling’s taken care of by a Mishimoto radiator along with a Setrab oil cooler, and the whole shooting match is overseen by a Link G4+ Fury ECU – this unit is designed specifically for six-cylinder motors and allows Jim a lot of adaptability and customisation. Low boost is a still-quite-high 1.8 bar, which delivers 830hp to the wheels, while the high-boost 2 bar is where we find that astounding 940whp figure. 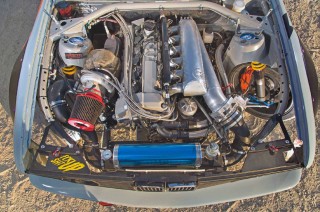 What’s also particularly noteworthy is that the enormously-reworked engine isn’t nestled within a stock E30 bay; no, you’re looking at a bespoke tube-frame fabricated by the revered mad scientists of drift at Stockholm Speed Industry. You’ll find more of this wizardry at the tail end. Looking down on the rear from above, it becomes apparent that the back window is Frenched-in at a steep angle to create a sort of flying buttress effect either side, and below this almighty funnel is the aforementioned Mishimoto radiator – yep, it’s rear-mounted because, to be realistic, you don’t get a huge amount of air flowing through the front grilles of a drift car as they’re always going sideways. This way the air gets channelled down via the roof, and the underside of the bumper and any previous mountings thereof have been unceremoniously binned to allow those twin fans to do their valuable work. An engine this extreme takes a lot of powerful and consistent cooling.

Having a clear view underneath the car lets you discover that there’s a lot of other stuff going on under there. The rear diff is an BMW E28 535i item, while the gearbox once called an BMW E39 530d home – incredibly, these factory units are tough enough to cope with both the abuse of drifting and the cartoonish power that’s being rammed through them, and it simply took the addition of M5 CV joints, a custom propshaft from Sellholm Tuning and a Sachs Performance two-piece clutch to get it all singing from the same raucous hymn sheet.

The two-way adjustable KW coilovers are making themselves known under there too, resplendent in the trademark purple and yellow, and they sit behind broad Japan Racing wheels along with an unusual braking system – it’s not surprising to learn that a car like this would be running six-pot brakes with 330mm discs, but perhaps slightly more so to find that it’s using the same setup at both ends. But that’s the nature of top-flight drifting, it demands all kinds of mechanical solutions that you might not expect.

Naturally the interior is all business too, boasting a state-of-the-art Plex SDM- 300 digi-dash so that Jim can keep a keen eye on that shouty motor’s vital signs. We also find Racetech seats with Simpson harnesses, the obligatory towering hydraulic handbrake and, in keeping with Jim’s focus on safety, an extraordinarily comprehensive roll-cage and the intelligent Fogmaker fire suppression system. Look up to the ceiling and there’s a huge safety pull cord to flood the interior, along with a bank of switches to activate the underbonnet extinguisher. No chances are being taken here.

And that acts as a tidy metaphor for the car as a whole. It’s been impeccably-engineered, with every single element fit for purpose, and all margins for error have been carefully considered. It’s almost easy to forget that this is a ballistic drift missile with performance that could shame any hypercar you care to name. Until Jim fires it up, that is, and you remember just what you’re looking at. The boost is mighty.

“The key to the exterior aggression is the VMR Customs wide-body kit, which adds a huge amount of presence to the once-slender E30 form as well as allowing the sort of broad track a slider demands”

“The key to the exterior aggression is the VMR Customs wide-body kit, which adds a huge amount of presence to the once-slender BMW E30 form as well as allowing the sort of broad track a slider demands” 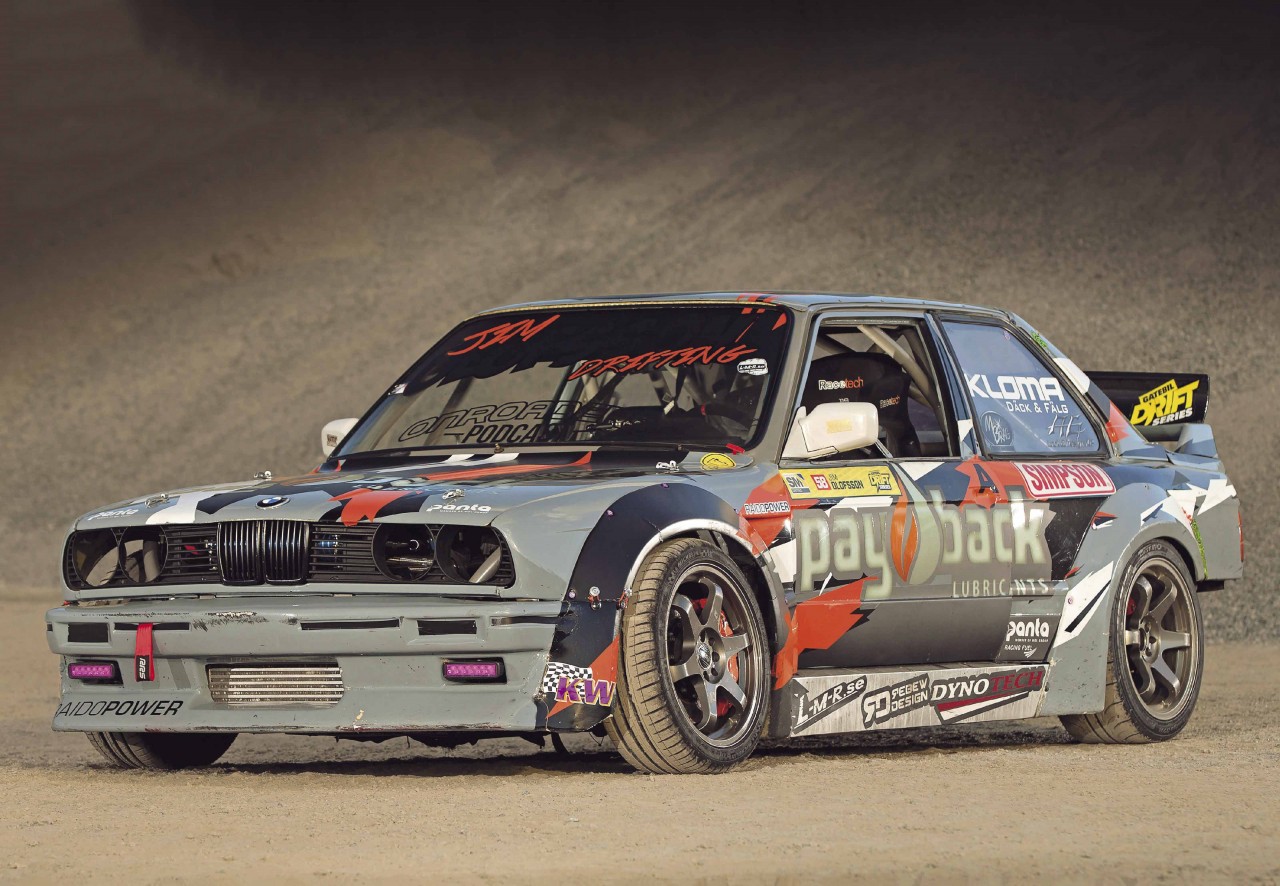 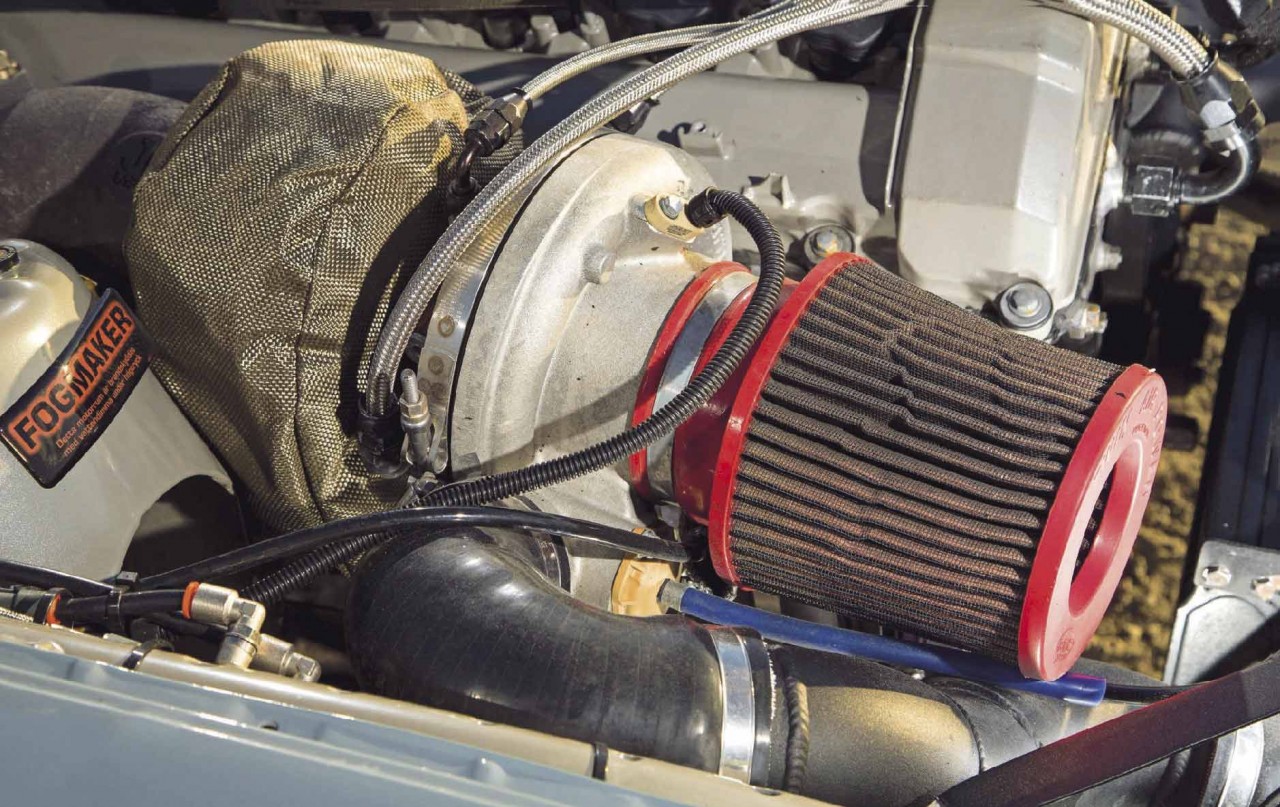 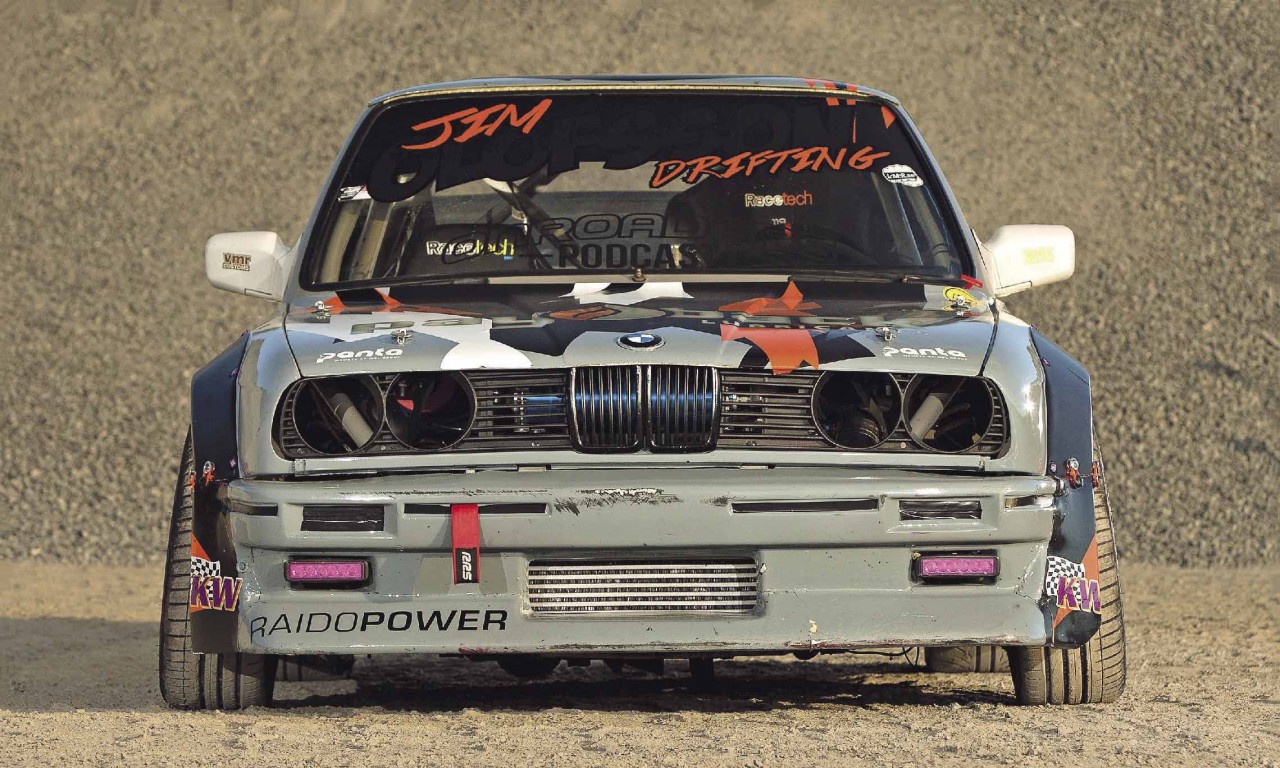 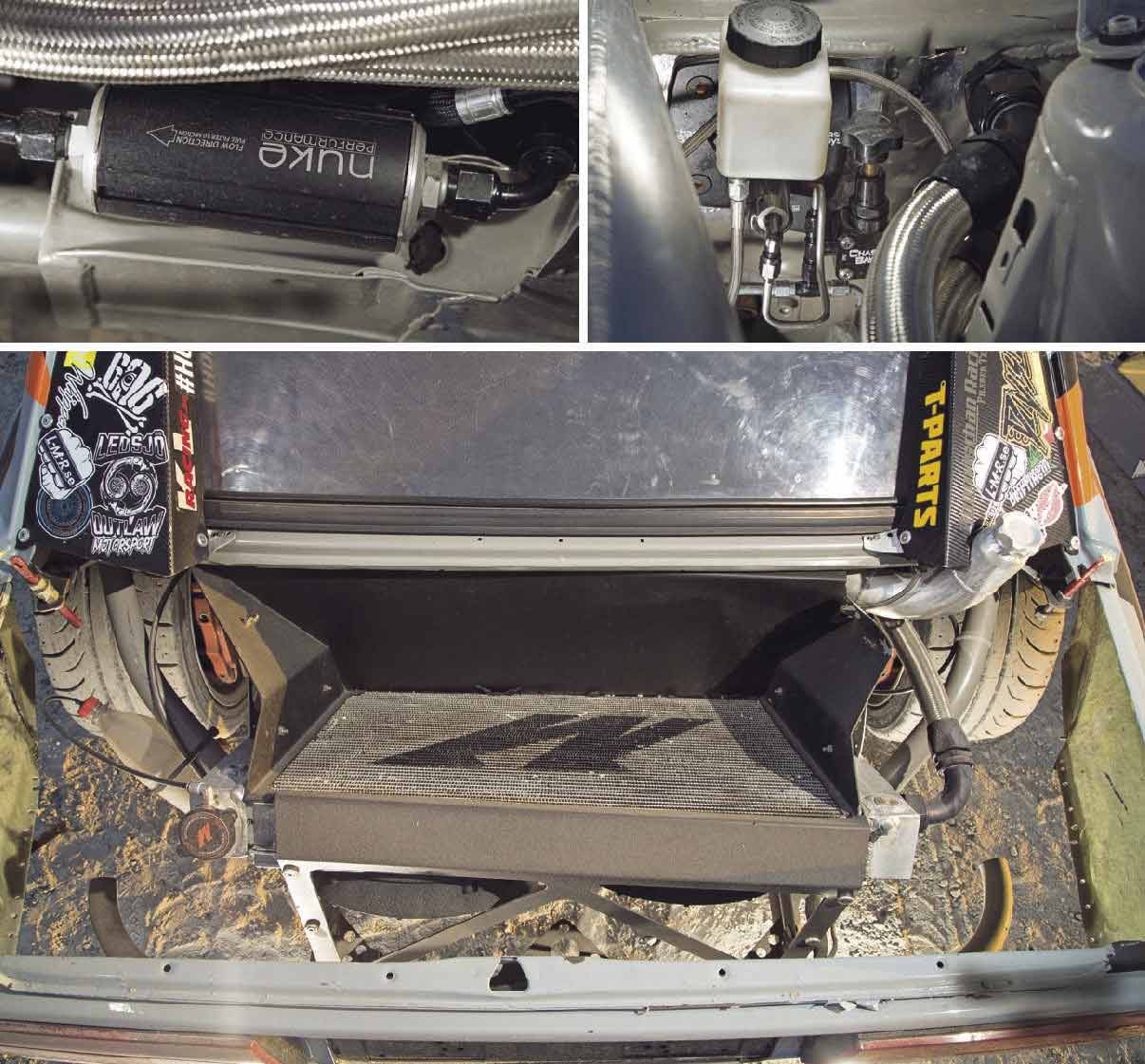 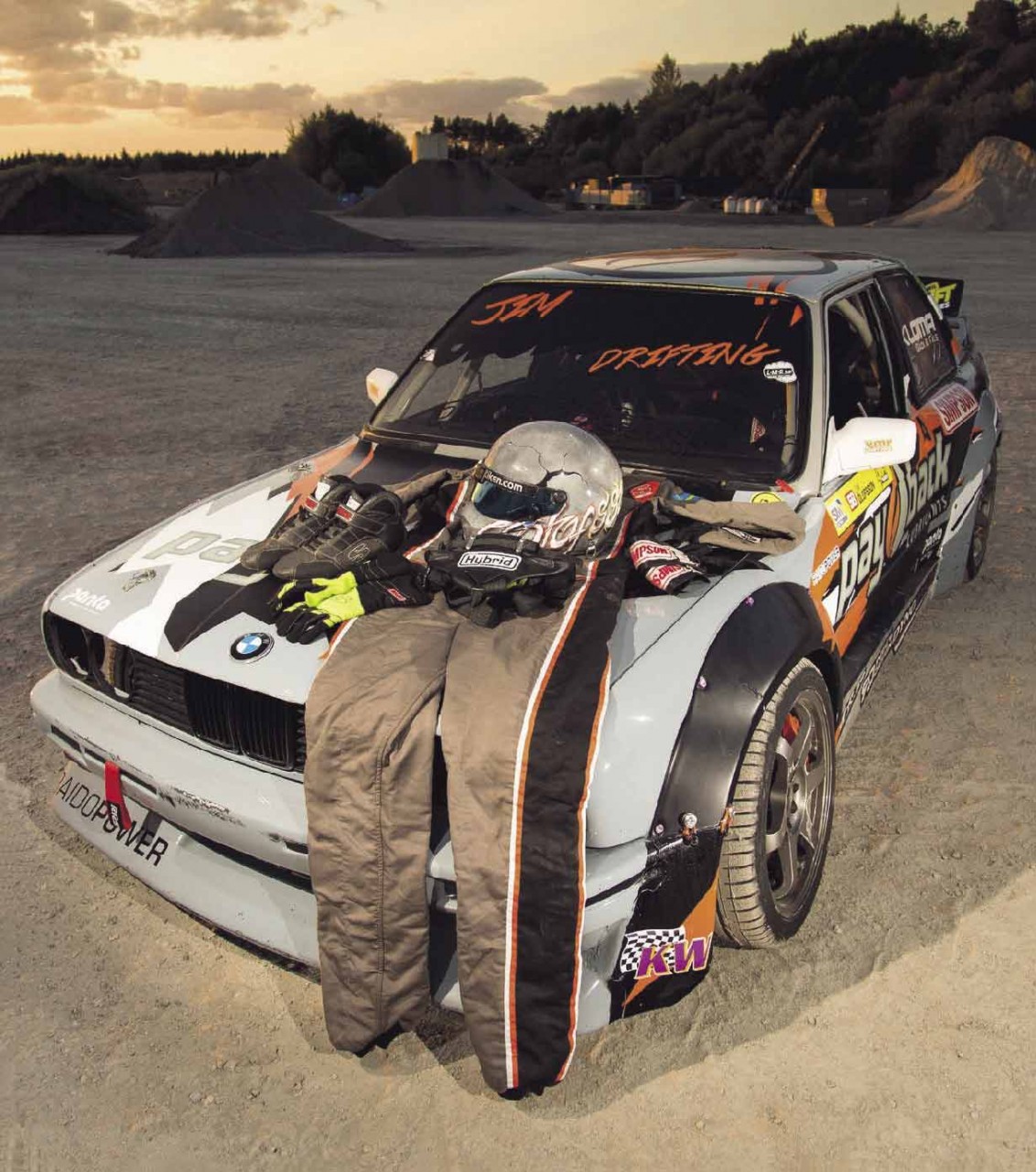