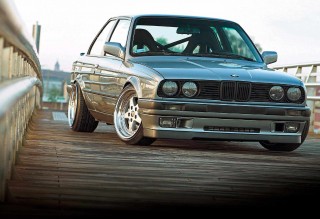 With its oh-so subtly enhanced styling and a thumping great V8 under the bonnet, classic 3 Series motoring doesn’t get much better than this awesome E30. Words: Elizabeth de Latour. Photos: Sebastian Obara.

Ever looked at an E30 and just thought ‘Yes’? That’s how we felt when we first set eyes on Marek Podhorodecki’s example. From the outside it’s sheer class, the timeless two-door body enhanced with the subtlest of additions: those pinstripes, the smoked lights, those rare, period-perfect Kerscher splits. All boxes ticked. Then through the windows, you spot the bucket seats, the harnesses, roll-cage – this is clearly a serious build and there’s more going on here than meets the eye. Then there’s what you can’t see – the V8 under the bonnet that is the icing on the cake and really makes this car. Marek, we salute you. 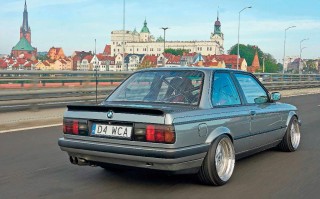 We’re in Poland for this V8 E30 adventure, a country that loves BMs thanks in no small part to its proximity to the home of our beloved Bavarian machinery, but due to the country’s past these weren’t cars you used to just see out and about on the streets, which explains why the E30 was a dream car for Marek when he was growing up. “I’ve been a big fan of cars in general since I was little, I have to admit that there are so many beautiful cars out there, I wish I could have at least 10” he laughs. “So I can say that I’ve been into cars for over 30 years and the BMW E30 was always my dream car when I was young; unfortunately, I didn’t have enough money to buy one. We are talking about the late ’80s and early ’90s and communist days in Poland; those cars were very rare on the roads, it was like a LaFerrari or Pagani Zonda these days – you know they exist however hard it is to see it one on the streets. It was the same back in the ’80s and the ‘square one’ was a dream car,” he says with a smile.

“My first BMW is the only one I have ever owned and it is my present E30,” Marek continues. “I started looking to buy a car in 2014 however only managed to get a good candidate to buy in 2015 thanks to my colleague, Piotr Piersa (owner of a very nice 850i E31 with private plate W8GREEN and a collector of registration plates).

"For events – and our shoot – it’s equipped with a set of Kerscher RX three-piece 17s, with silver centres and polished stepped lips and they look so good on the classic Three, the period design sitting perfectly with the car’s iconic styling

He let me know that there is a real car specialist and passionate guy called Marcin Zalewski (nicknamed Dawca, which means donor) and he might sell it to the correct person. The reason why I mention Marcin’s nickname is that my private plate is D4WCA – I was so happy with the car after a few months of driving that I decided to put his nickname on the plate,” he grins and that’s a nice touch.

“In the beginning, the plan was to find a correct car and just enjoy driving it on weekends without spending more money,” explains Marek. “However, after meeting a big group of E30 fans in my city (you can find them on Facebook: E30ZS – Zachodniopomorska Strefa) and after a few months of meeting those guys, seeing different cars and modifications, I decided to continue what Marcin Z. started,” he says. Marcin had already carried out a fair chunk of the mods on the car but there’s always room for a little more and, with a varied motoring past and plenty of experience with modding (Marek’s current daily is a 400hp+ Mitsubishi Evo X), Marek got cracking with making this E30 his own, and it made sense to ask Marcin to carry out the work seeing as he knows this car better than anyone else.

Without doubt, the most exciting part of the build is that engine swap – the car had originally started out life as a 318i but that wasn’t nearly exciting enough and so the stock M40 was unceremoniously removed and in its place now sits an M60B40, donated by an E34 540i, which has been fitted along with its five-speed manual ’box. The engine was treated to new seals and gaskets along with a remap that has raised power to 305hp with a hefty 302lb ft of torque, and that’s plenty to be getting on with in a car as light as the E30.

"Without doubt, the most exciting part of the build is that engine swap – the car had originally started out life as a 318i but that wasn’t nearly exciting enough and so the stock M40 was unceremoniously removed and in its place now sits an M60B40”

There’s also a custom cat-back X-pipe-equipped exhaust with twin upswept tips that delivers a suitably thunderous V8 soundtrack, and at the rear sits an LSD with a 3.07 final drive and a 45% lock-up that ensures this E30 puts all of its V8 power down and also allows Marek to have more than a little fun when the mood takes him, which we can only assume is often. The sight of a V8 stuffed into the engine bay of an E30 is one that will never fail to impress and always puts a smile on our face – big V8 power in a small, light car is a killer combo that’s impossible to resist.

Of course, as we all know you can’t simply stick some serious power through a chassis and expect it to cope without breaking a sweat so this E30’s underpinnings have been suitably enhanced to better deal with those 300 V8-shaped horses it’s been endowed with. You will notice that this E30 has been treated to some serious lows which have it sitting perfectly and they come courtesy of the suspension combo that has been fitted here – up front you will find H&R springs along with B8 dampers and camber-adjustable top mounts while at the rear sit Konis and they deliver the perfect drop as well as seriously enhancing the handling. In addition to that, the chassis has been fully poly bushed and a five-stud conversion has been carried out front and rear and it’s been put to good use as Marek’s E30 is sitting pretty on some seriously sexy wheels. For events – and our shoot – it’s equipped with a set of Kerscher RX three-piece 17s, with silver centres and polished stepped lips and they look so good on the classic Three, the period design sitting perfectly with the car’s iconic styling. But that’s not the end of it, because this is far from just a show car and Marek is more than happy to exercise that V8 out on the track, which is when you’ll find the car sitting on a set of Style 24s – the 17” five-spoke E36 M3 wheels – while the grooved discs and braided hoses front and rear ensure it has stopping power to spare.

We’ve already touched on how good this E30 looks and it comes down to the faultless combo of the wheels, the drop and the subtle selection of styling additions that have been applied across the car’s exterior. You might be wondering just how this E30 looks so darn dazzling and that’s in no small part down to the fact it was completely stripped and the body was then sandblasted and treated to a full respray in its original shade of Lachssilber (that’s Salmon silver) and so it looks even better than new. We’re big fans of the classic BM styling from this period being unsullied by the overzealous addition of unnecessary exterior elements, but we’re all for a subtle series of enhancements via a selection of period touches. Up front sit the smoked Hella headlights and they are joined by an iS lip along with a pair of black grilles; the car’s flanks have been fitted with a set of pinstripes that follow and enhance the swage line that runs along the full length of the car and perfectly mirror the black window trims and rubbing strips above and below and they look fantastic. Finally, at the back you will find a set of genuine MHW smoked lights and an M Tech 1 boot spoiler, which combine to deliver just the right amount of rear-end aggression and finish the car off perfectly on the styling front.

The interior, meanwhile, is the perfect blend of hardcore and plush, offering at once a cabin that is both comfortable and luxurious while also being perfectly equipped for the track, and this refined race combo works extremely well. In terms of the luxury elements, you’ve got the black Alcantara headlining and the leather-covered dashboard, centre console and door panels, which combine to make the cabin feel that much more opulent. The race elements, meanwhile, are ticked off by the Mirco buckets with four-point Sabelt harnesses that are mounted to the rear roll-cage, there’s a suede-wrapped 360mm M Tech 2 steering wheel, a hydraulic handbrake and a pair of oil temperature and pressure gauges mounted on the steering column. It all looks awesome, has been executed perfectly and fits the whole car so well.

Marek’s E30 is a mighty machine – it’s got everything covered on the styling front, it sits right, the wheels are on point, and then there’s the small matter of the rather large V8 stuffed under the bonnet. This is a build that really has got it all and wherever you look you find something special that sets it apart from the crowd and you can tell it’s been built with love and pure passion. With this being such a downright awesome machine it’s not surprising, then, that Marek can’t put his finger on one single mod that stands out from all the others as his favourite, but he’s definitely got two things that he especially loves: “If it’s running, the exhaust; if it’s parked, the wheels,” he grins.

As beautiful a build as this may be, Marek’s far from finished and he’s got plenty more in store; “The car is in constant progress, I’m collecting rare parts to fit them one day and change the car rapidly… as they don’t come cheap it takes time. Some people (friends from E30ZS) are pushing me to make it faster, however, I will do it when the time will come,” he smiles. “I have lots of plans for the car but I will keep them to myself to get another feature in PBMW… if I’m welcome?” he chuckles. Marek, we’d have you and your awesome E30 back in here in a heartbeat.

THANKS The biggest thank-you to my dearest and loved wife Dominika and daughter Maja for keeping their eyes closed when I’m spending money on the E30, for giving me a lot of time to spend with the E30ZS team, for allowing me to go on weekend car events… mostly alone, for giving me time with my daughter to share my passion and going on one-day events. Piotr Piersa at pysio-pl8s.pl, Marcin Zalewski – the owner of Atelier Classic Cars Tyszka&Zalewski, E30 Zachodniopomorska Strefa, G Squad Garage, all the lovers and haters – you keep me strong and I will push forward, that is a promise! A big thankyou to Sebastian Obara for the photos, and last but not least PBMW for allowing me to be part of it and to share my passion. 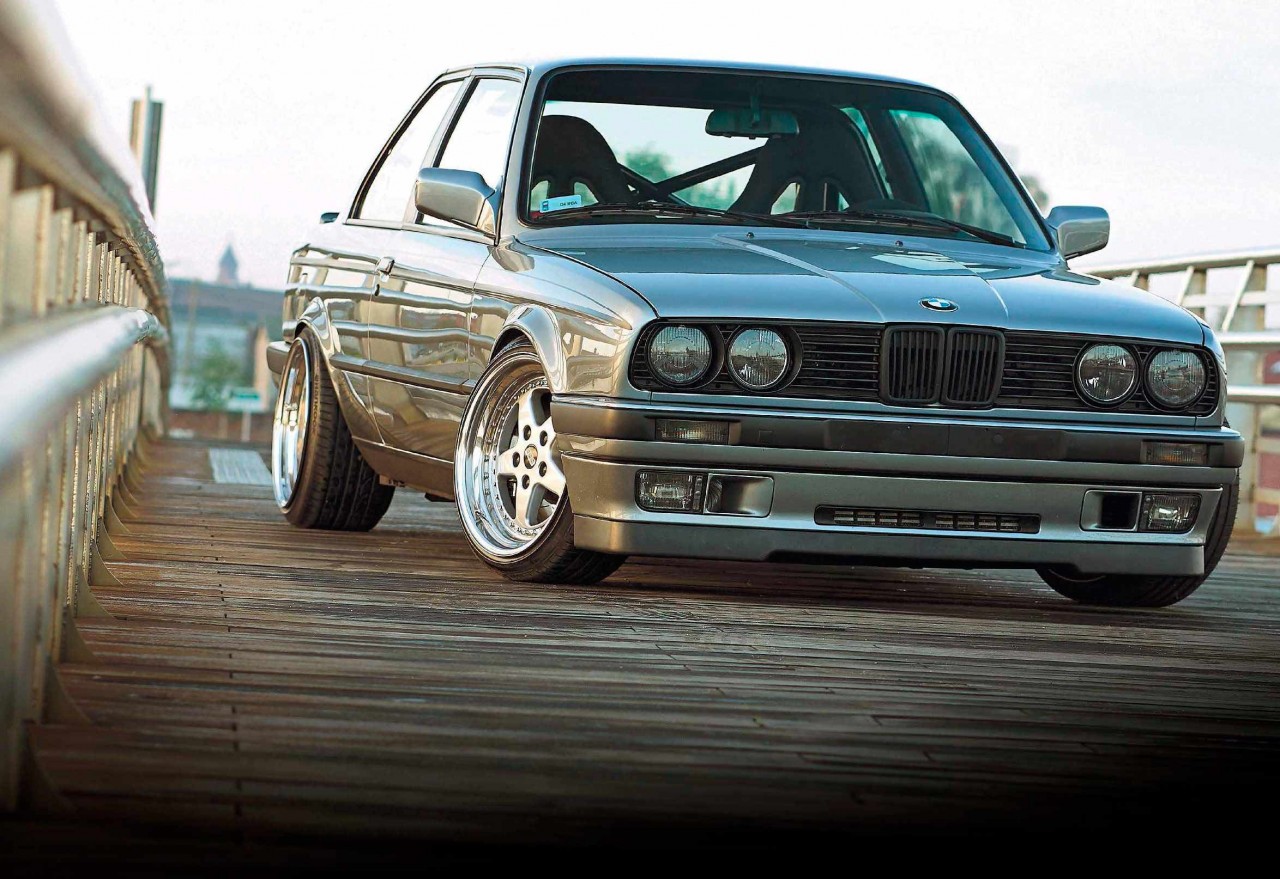 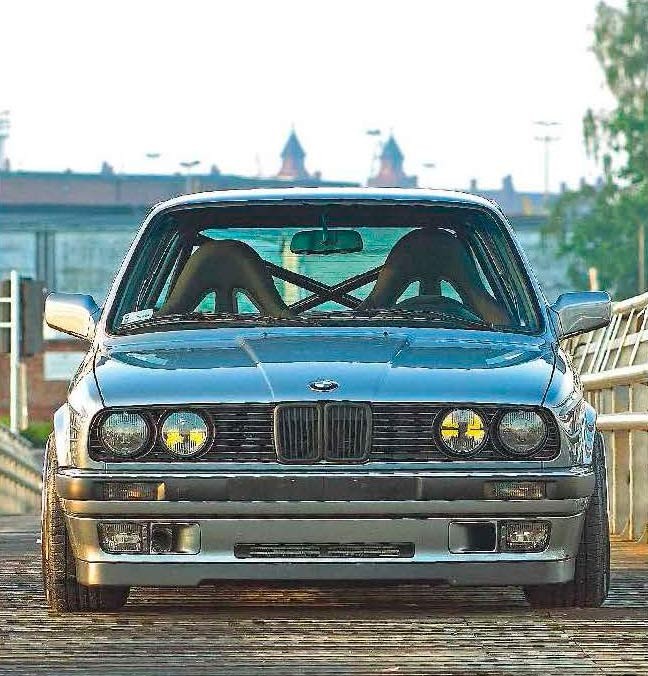 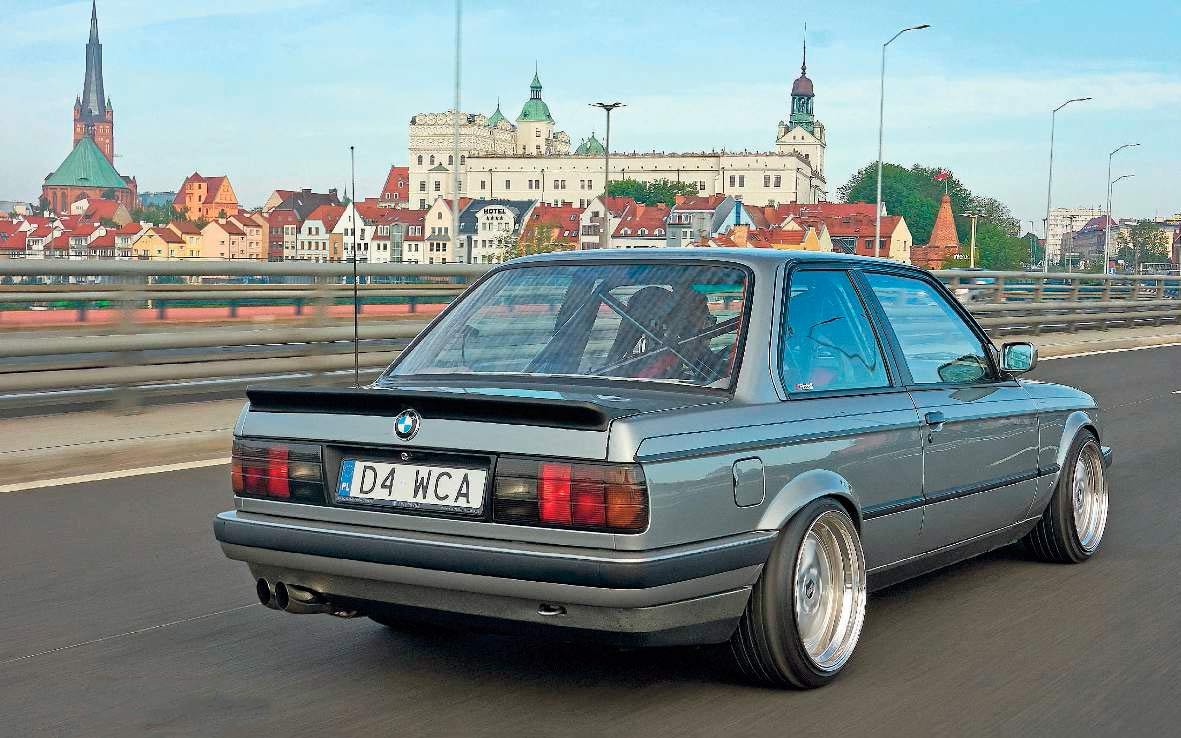 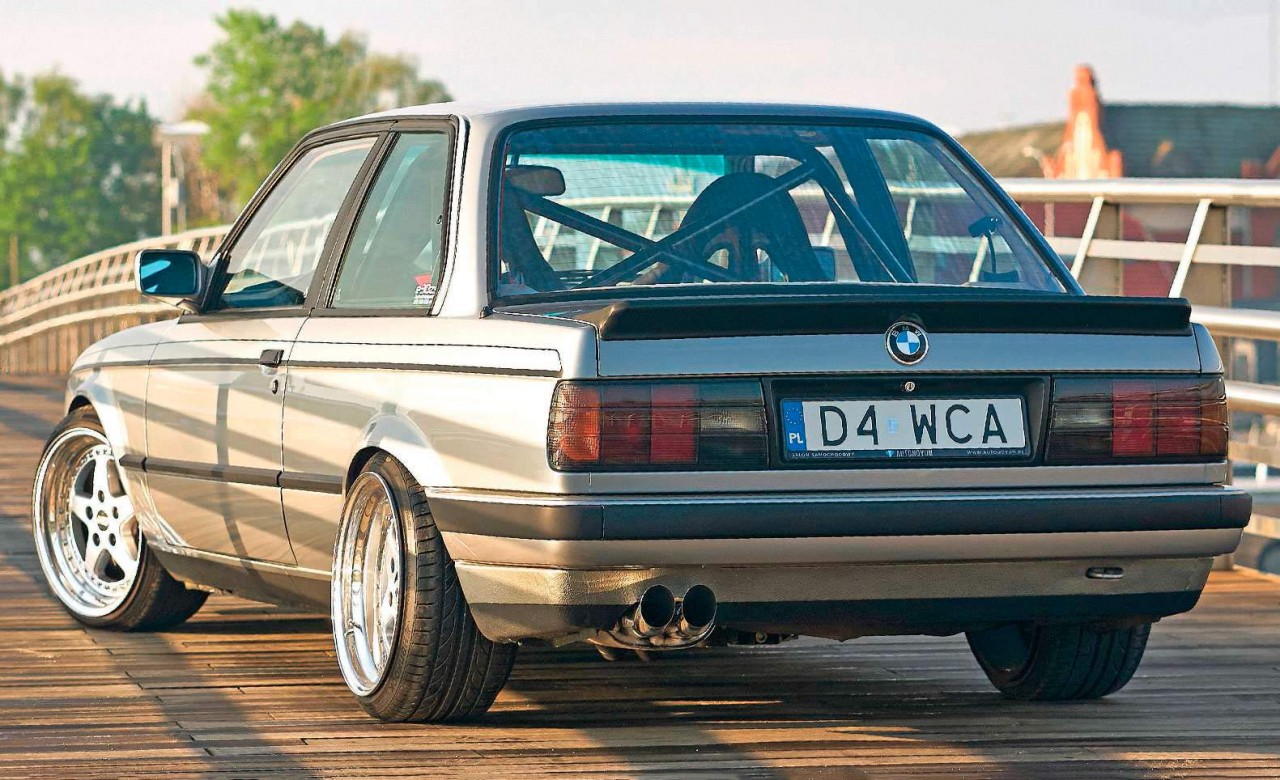 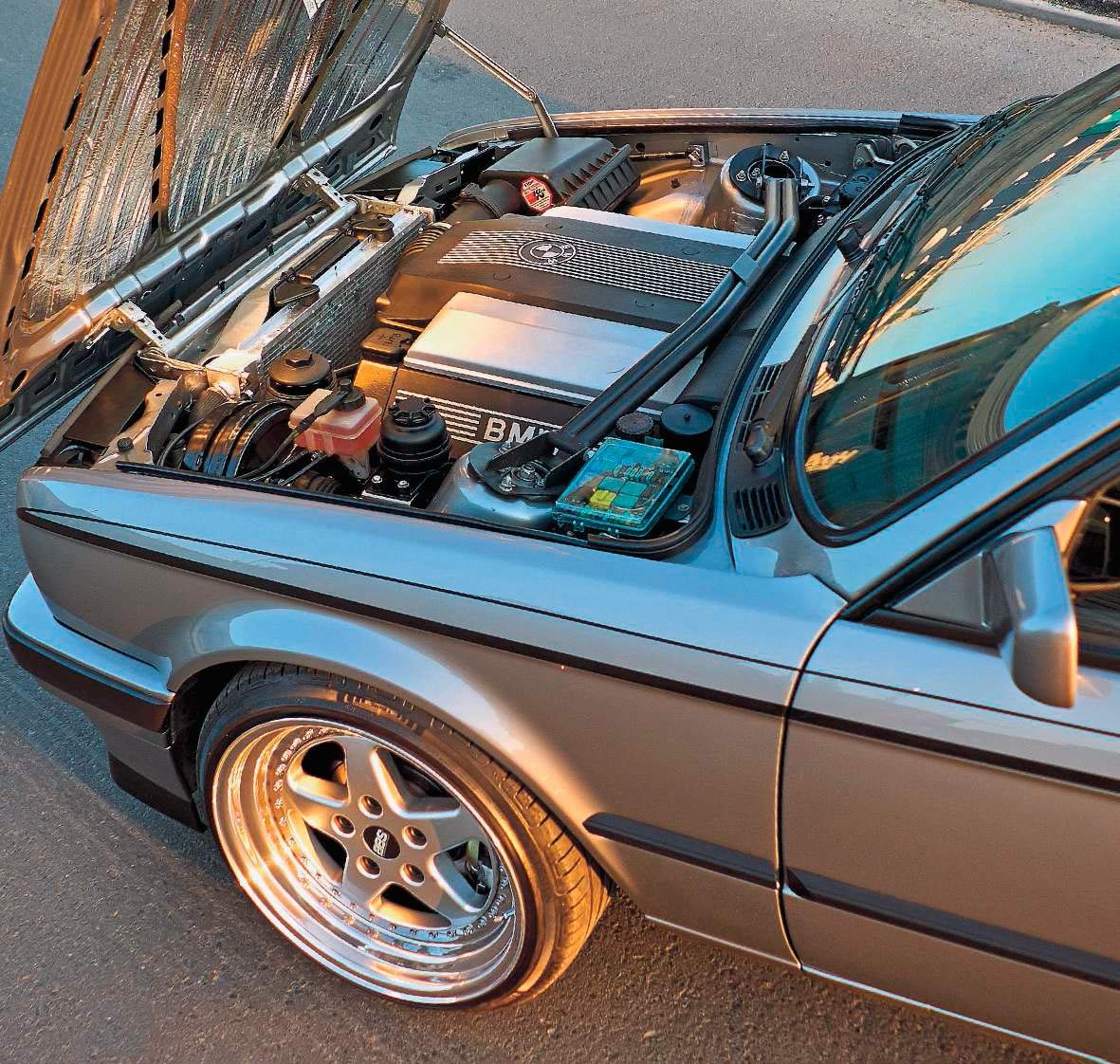 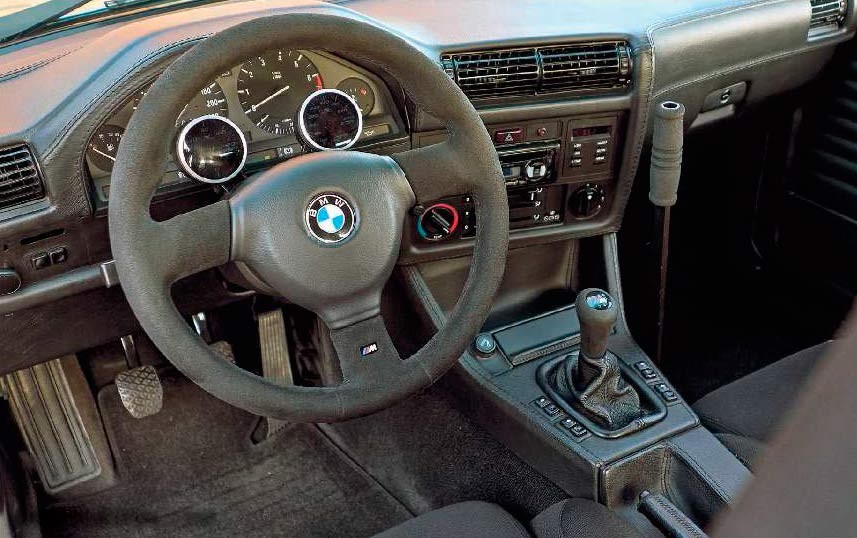