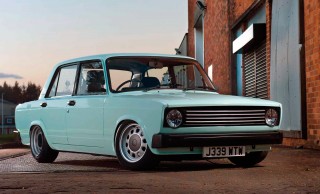 Retro Ride Lada Riva ‘90s Lush Lada Riva. WORDS: Daniel Bevis. PHOTOGRAPHY: Ade Brannan. AIR BRICK A Lada on air-ride, with copious VW styling cuesand more than a hint of modern Fiat? Oh, such Western decadence… Euro Mix Lada Riva. These have been the butt of many a joke over the years but they were certainly popular on the ‘Bloc’. Then again, we’re guessing the Soviets didn’t have much of a choice - it’s the Lada or the gulag! Still, at least this one is awesome.

Since the fall of Constantinople, Russian culture has had a rather uneasy relationship with the influences of the West. It’s peculiar to think of a country of such unutterable vastness hiding so many secrets: how many Russian artists can you name, or movie stars, or bands, or comedians? The nation was late to show any interest in globalisation, because they didn’t need to, so the snowy colossus remains an enigma.

Interesting, then, that one of the great cultural icons of Russia should actually be a Western European idea. The mighty, unstoppable Lada, which you may also know as the VAZ 2101 or a variety of other names, was essentially a lightly reworked Fiat 124, although whereas the 124’s production run lasted eight years in Italy, its Eastern Bloc counterpart soldiered on in increasingly (but not radically) updated forms right up until 2012.

The car you see here is actually a Lada Riva, which (without miring ourselves too deeply in the serpentine Lada/Fiat/VAZ history) was a 1980 update to the 124 platform that sold in relatively decent numbers as an official UK model… and Simon Harkness’s example, a 1991 car, fully embraces the encroachment of Western influence on stark Russian utilitarianism, featuring as it does a fairly heavy debt to the Volkswagen tuning scene. And perhaps what’s more unexpected is that there’s really quite a lot of Fiat in there too, which has a certain historical appropriateness. The story comes full circle.

This cross-cultural mischief is just the latest in a long line of offbeat retro tin for Simon, as his rich automotive history keenly demonstrates. “I’ve always been a bit obsessed with cars, and my first one - a Mk1 Fiesta - is still an unfinished project that my dad and I started back in 1997,” he explains. “I also had a Mk1 Golf that evolved over eight years of ownership, and after that came my first Fiat Coupe 20VT - that ended up too fast for legal fun on the roads though, and was followed by my Mk1 Escort which I still have. It felt faster than the Fiat but at half the speed!” Then there was a Mk2 Escort, and a variety of other 20VT Coupes… diverse indeed, but where did the idea of a Lada come from? 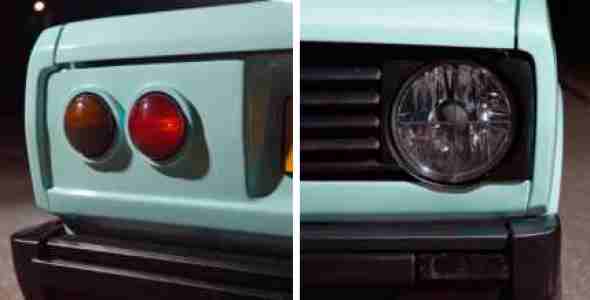 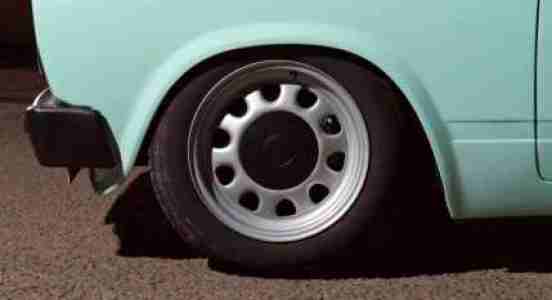 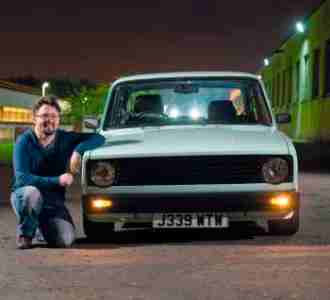 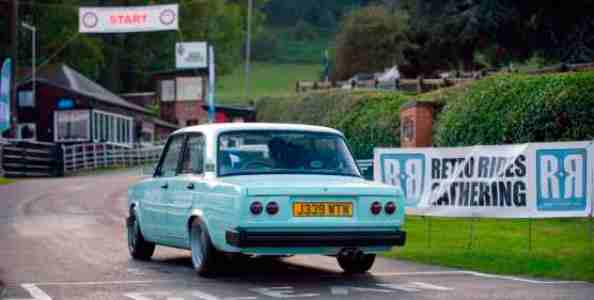 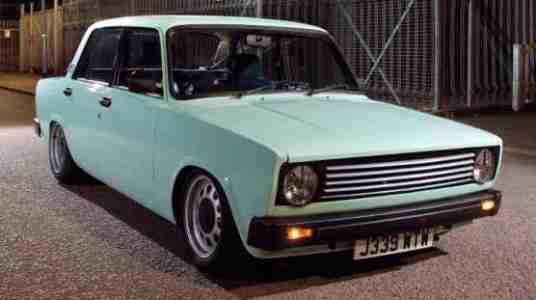 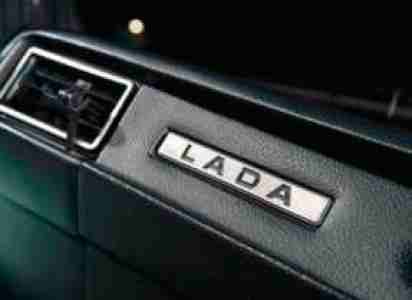 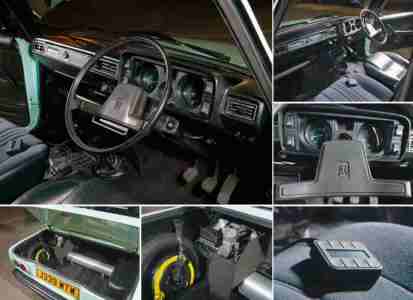 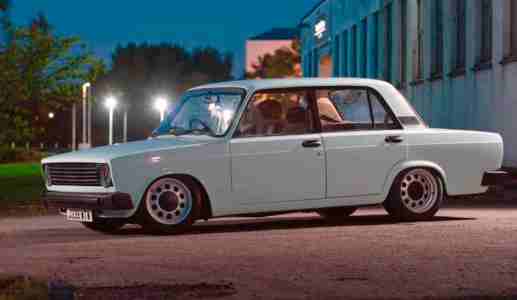 Fiat Coupe rear lights are a custom masterstroke… Finer details, like the jacking points modified to be flush with the sills, show immense class. Apart from a few tweaks (and a Fiat Coupe driver's seat) the interior remains how the Russians intended. Simon decided that air ride was the only way to go. We have to agree! One-off Mk2 Golf grille keeps the people guessing!

“It was bought with the intention of being a cheap and cheerful retro to get back on the road with, while I decided what the next plans were for the Escorts,” Simon says. “I had a notion for a Fiat 131 or 124 but they seem to mostly have vanished and any survivors are too expensive or too rusty. A Lada 2101 would have been my ideal choice, but they all seemed to be LHD, so I started looking at Rivas. I bought this one unseen on eBay, under the description ‘a DIY mechanic could get it through an MOT with less than a week’s work’. No chance!”

Yeah, we’ve all heard that one before. As it turned out, recommissioning the Riva was rather an involved task, requiring new wings, inner and outer sills, three complete doors, new quarters, and repairs to the A pillars, chassis legs, lower rear corners, jacking points, inner wings, and floorpans. So the idea of ‘getting back on the road’ pretty much evaporated, but Simon wasn’t downhearted. He’s a tenacious type, you see, and he was starting to form a vision for just how cool this austere Communist-era motor could be.

With the hammer deployed (although perhaps not the sickle) and the epic weldathon despatched, the car was looking like a car again, rather than the disheartened and slowly oxidising cuboid of misadventure that it had initially revealed itself to be, and our hero’s thoughts turned to modification. Some practical, some fun – it’s good to maintain a healthy balance – and job one on the list was to tweak the gear shifter a bit. “Seems like Lada left the gearchange set up for LHD, it was easier for the passenger to change gear than the driver,” he recalls with an amused grimace. The car received a full custom stainless steel exhaust, for that is Simon’s specialist area of expertise (he’s the eponymous brains behind Simons Custom Exhausts (www.simonscustomexhausts.co.uk), and then… well, it was time for something entirely different.

Now, this car’s here as a wildcard in the VW issue, we know this, but we have to talk about Fiats first, as they play such a key role in this car’s look-and-feel. With Simon’s history of 20VT Coupes, it was perhaps inevitable that he’d have a few spare bits and bobs lying around – the first of which was a leather driver’s seat, which found its way into the Lada owing to the original item having been ‘destroyed by a previous heavy owner’! And then came the tail lights, which really set the cat among the pigeons.

“The Fiat Coupe rear lights were cut out of a spares car I already had,” Simon enthuses, “and were probably the most Marmite part of the build - a lot of people didn’t like them on the Retro Rides forum!” But we all know that the opinions of people on the internet are generally worth about as much as the pixels they wink from – if you build your car to your own tastes, you’re doing it right. Any third-party praise may be considered a pleasant but non-essential bonus. “Almost everyone who’s seen it in the flesh seems to like the lights,” he says. “Or, at least, has been polite enough to pretend.”

In addition to the lights and that driver’s seat (the matching passenger seat will be following soon, we’re told) Fiat again rears its head in the form of the paint, which is a shade named ‘Latte Menta’, taken from the current 500 range.

Simon carried out all of the body and paintwork himself; indeed, he reckons there were more hours in the paint prep than even in the welding marathon! But enough of Turin – let’s turn our attention to Wolfsburg. The wheels you see here, banded for muscular girth, originally called a VW Polo home, the ‘baby G60s’ widened to 6.5 and 7.5-inch respectively. But the most obvious VW influence is staring you right in the face from that radically reworked nose. “The inspiration behind the round headlights was actually the original Lada 2101/Fiat 124 design, before it was all squared off and - in my opinion - ruined when they went to the Riva,” says Simon. “I wanted the car to look like a more natural evolution of the original design, but keep the unmistakeable three-box silhouette of the Riva.” The lights chosen for the job are a set of Mk2 Golf crosshairs, and naturally the most logical addition to these would be a complementary Golf grille to keep it all looking at home. The Lada, however, is somewhat wider than the Golf, so this actually involved plastic welding two hacked-up grilles together, with the ends remodelled to suit the wings.

And the final piece of the Volkswagen-shaped jigsaw? Ah, that’d be the air-ride.

Okay, sure, bags aren’t an exclusively VW thing, but you can’t argue with their ubiquity within the VeeDub scene. What Simon’s done is to pull some of that technological curiosity into the Eastern Bloc to create one of the very few ’bagged Rivas in existence. “This isn’t a typical air-ride car that’s dropped for show and then driven around at standard height,” he assures us. “It’s all been designed to run as low as possible, and just be raised back up enough to work when fully loaded. The air suspension was a massive learning curve as it’s not something I’ve ever tried before, and all bracketry for the bags and shock absorbers had to be custom-made to fit the Lada suspension. Being a bit paranoid, I now think everything is a bit more heavy-duty than necessary - but since weight really isn’t an issue it’s better to be safe than sorry!”

The result of all this off-the-wall thinking is arguably one of the coolest retro cars on the scene right now: the familiar form of the three-box Lada, given a contemporary twist with a pan-scene influence. It’s rather appropriate that Simon’s Lada was registered in the year of the dissolution of the USSR, as these Western cues have been able to merge seamlessly with the austerity of the ageing design. It’s taken a hell of a lot of graft to get to this point, but that is in itself very apt: the struggle of the proletariat, the bloodied fingers of the working man. This Soviet icon is its own Western reward.

THANKS: Linsey, for encouragement and not asking how much everything cost! Ade Brannan, for not allowing me to wait until the car was finished before trying for a feature, as it will probably continue to evolve for a few more years. Tom and Elena at Lada Spares UK, and Pavel at Lada Power. And thanks to dad for introducing me to angle grinders and sanding blocks all those years ago!

IS IT REALLY A DAILY DRIVER?

Yes. Unlike a lot of flawlessly-finished air-ride builds out there, this Lada is no show pony. “The car is used daily, and is surprisingly practical,” Simon smiles. “Every part of the build was aimed at being both useable and reliable, which is why I’ve kept the bumpers, and gone with a factory colour. Bumperless with candy paint could have been nice, but I wanted to be able to use this without having to worry too much about it! It accommodated two adults, two children, a tent and all the camping equipment for heading down to the Retro Rides Gathering in last year, and it does get a lot of looks and doubletakes as people try to work out whether it is actually a Lada!”