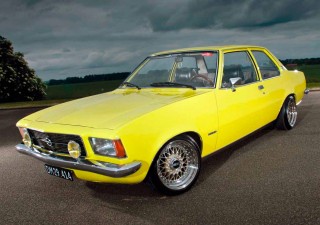 Rekord Breaker ‘70s Spotless Opel Rekord. Retro Ride Opel Rekord. Words: Dougie Rankine. Photos: Steve McCann This outstanding Rekord D nearly ended up on the scrapheap but, thanks to the dedication of Dennis Jensen, it’s now one of the best in the world!

Danish Opel Rekord. The cleanest Rekord on the entire continent? We don’t know about that but it has to be close. You could certainly eat your bratwurst fritters off of that engine!

General Motors traditionally liked to have a lot of different brands. In the United States they had Buick, Oldsmobile, Cadillac, Chevrolet, Pontiac and GMC. Meanwhile in Europe they had Vauxhall of the UK and Opel of Germany. In comparison, Ford were mostly just plain old Ford. With hindsight, what tactic was better? From a British point of view Vauxhall did their own thing until the 1970s when the concept of global car platforms began to be implemented. That meant Opel and Vauxhall were competitors in markets where they both sold cars. In the UK foreign cars were a hard sell as they were hit by import restrictions and it was seen as a good thing to ‘buy British’. A case in point was the Opel Ascona; a fine car, well built with superior running gear to the Ford Cortina but they only sold a handful in the UK. With Vauxhall struggling at the time and badly in need of a new mid-size car, GM wisely decided to graft the Manta nosecone on, badge it as a Cavalier and boom, a legend was born. It was perceived as British and even though cars were initially built in Antwerp (before production began in Luton) they eventually sold over 250,000.

The circumstances of the era meant that few Opels were sold on Vauxhall’s home turf, the exception being the Manta B, but that was mainly down to the short lived GM-Vauxhall-Opel branding of the 1980s. And you know what? It’s a real shame. Vauxhall may have had the superbly styled coke-bottle HB Viva and FD Victor, along with the mini-muscle car Magnum and Firenza, but we missed out on some equally, if not more, impressive Opels. The Kadett, Commodore, Ascona and Rekord ranges all had some of the best styling of the era. An American influence was clear, but there was none of the ostentatiousness that blighted many yank tanks. 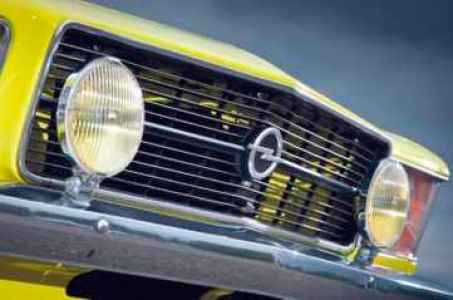 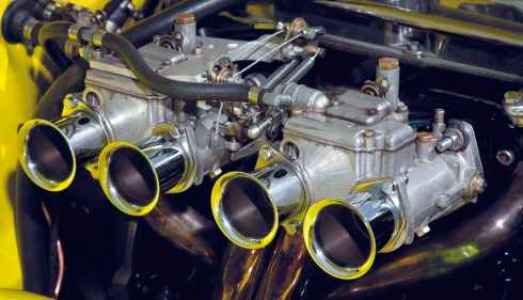 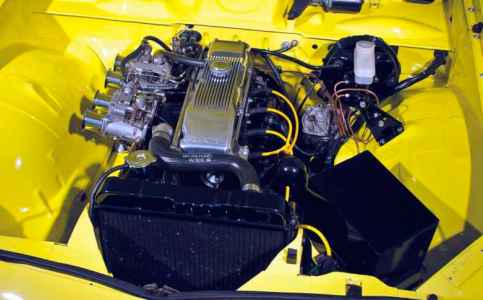 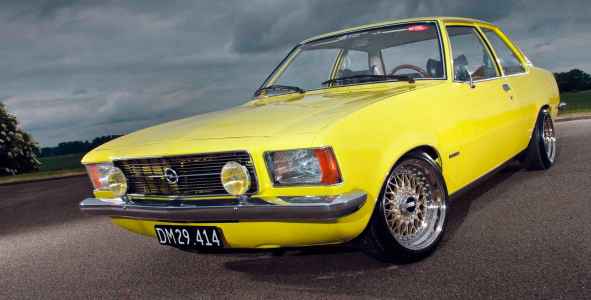 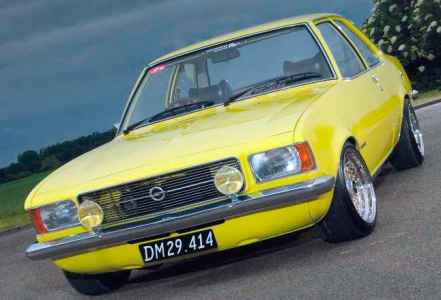 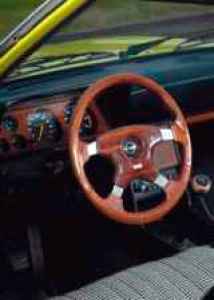 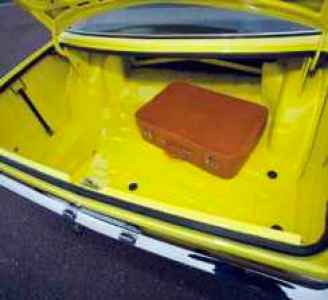 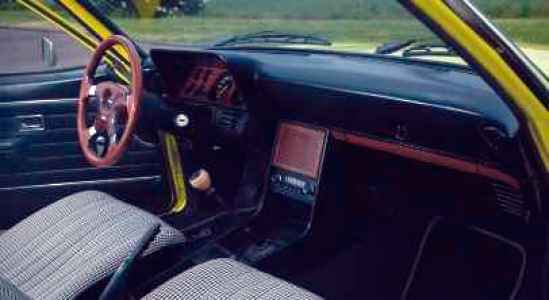 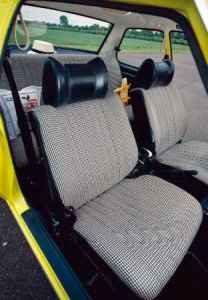 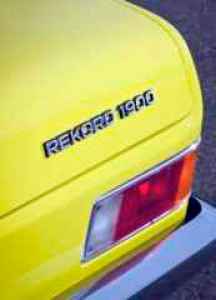 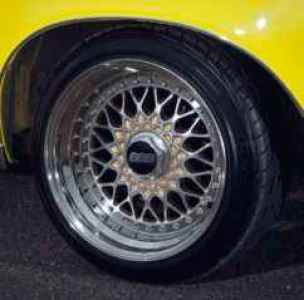 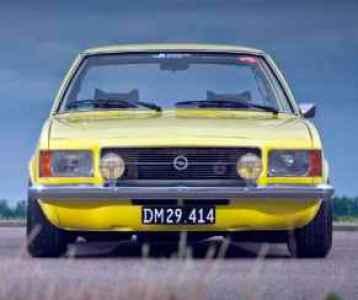 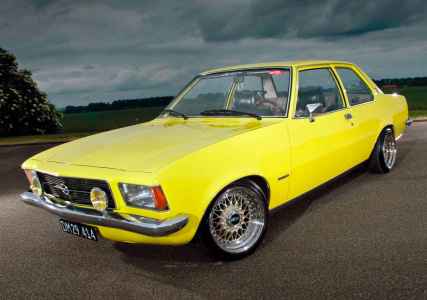 Super-clean factory trim, wood and a Momo wheel. The art of subtlety! Stock bodywork and dumped over incredible rims - this is what Euro-style is all about! As 40-odd year old engine bays go, this one definitely wins the Daz Doorstep Challenge!

Bearing all this in mind, when w e do spot an old school Opel it’s an unusual sight. The Signal Yellow example here was found at the sprawling Opel Treffen in Germany, although the car and owner, Dennis Jensen, are from Denmark – which is ironically one of the European markets where Vauxhall had decent success. This is a Rekord D, which formed the basis of the Vauxhall FE Victor, a car far less pleasing to the eye than the old FD. The Rekord though is effortlessly cool. There’s nothing that’s been done to alter the bodywork beyond standard. It’s lowered way down onto those classic BBS multi-spoke wheels with stretched tyres and that’s it. It’s not even trying, but it pulls the trick off, sat there as cool as Steve McQueen in aviator shades.

You don’t get that with many cars, especially not with the generations that came after this particular model.

Dennis bought the car way back in 2005, for the price of 25,000DK, equating to around £2500. Not bad at all when you consider the prices old Fords tend to make. Like any car built in the 1970s the Rekord was prone to rusting, but on first inspection it looked to be in good condition. It was a completely standard car and had been very well maintained; time was simply catching up on it. “I was all set just to respray it” he remembers, “but when I had a proper look it was actually very rusty underneath. It was then a matter of giving up, or taking the decision to fully renovate it.” As you can see, Dennis chose the latter but it was a close decision. The whole shell was stripped and sanded down to bare metal, and it was clear that there was quite a lot of work to do. It wasn’t a structural disaster, the floorpans and chassis rails had held up well, it was the arches, rear panel, quarters and wings, places which bore the brunt of the Scandinavian elements for years which had succumbed to rust. Interestingly, the car was built not in Germany but at the GM plant in Copenhagen, Denmark and Dennis reckons that the cars built here were produced with the harsh winter climate in mind. We’re pretty confident a FE Victor would have almost entirely dissolved before the end of the ‘70s.

The car is a 1974 model and originally featured a 1.9-litre engine that actually had one of the earliest fuel injection systems, a feature you wouldn’t see on a Vauxhall until 1982. The Rekord D range went out of production in 1977. Even though over 1.1 million were sold, some of the parts, particularly panels were impossible to find. Survival rates weren’t great and the rarity was what attracted Dennis to buy the car in the first place. “Some of my friends had older Opels, and I thought it would be cool to get one too. We just couldn’t find panels anywhere though” he says, “the rear arches have been fabricated by hand and the rear panel had to be built from scratch too. I have to thank my friend Dennis South whose skills in welding and metalwork made this possible.” To begin with, the car was stripped down at a workshop on a farm that Dennis rented with his father. Then it was moved to another workshop for welding before finally going to be resprayed at Dennis’s workplace; Hall Auto Paint of Holstebro.

In the middle of the bodywork restoration, Dennis bought a house, and immediately had to start a second restoration project. The most important part of this he reckons was the garage, which meant he was able to get the Rekord home and devote more time to it. With the classy black and white check interior trim being all original and immaculate, he decided to leave it that way. The engine was changed for a 2.2 CIH unit from a Rekord E, which provided a handy power increase, but kept the theme suitably retro. Dell-Orto 40mm twin carbs were fitted, along with a Rekord E 5-speed box, a 2.5-inch stainless exhaust and a custom-made manifold. “I call it the banana manifold” he says, “it is probably the one part I am most pleased with, it was such a tight fit to get it in.” Of course this new lump wasn’t just thrown in, it was prepped, painted and polished first. The bay was treated with similar care too as all the unnecessary holes were welded and ugly bits hidden before being smoothed and painted. The result is simply jaw-dropping.

There’s not a huge amount else that’s been done to the car but that’s a good thing as it just isn’t needed. The suspension set-up is a combination of Koni shocks with Mercedes 124 Springs up front and Ascona B lowering springs on the rear, bringing the car down by around 40mm. Then we come to the wheels. “There are so many choices for wheels on a car like this” says Dennis, “I went for something that I thought was in tune with the rest of the car, plus you can do a lot with this type of rim to alter the look. I’d quite like a set of Fuchs for it, but the style I’m looking for is no longer available and they’re not easy to find.”

When the car hit the road, Dennis was keen to use it often and has taken it to numerous shows both in Denmark and Germany, where it’s scooped numerous awards, including a prestigious 1st Prize for best Rekord/ Commodore at Oschersleben. “It generally receives a lot of praise wherever it goes” he smiles, “although I do get a few complaints from Opel purists that it’s lowered and is not running on its original wheels. One of the best bits of owning it is speaking to all the older guys. So many people either used to own one, or their parents or someone they knew had one. These cars were everywhere at one point, but are very rare now.”

The reason the car gets so much attention is down to the huge amount of effort that’s gone into the bodywork. It’s no mean feat to have to fabricate so much metal, and you can really see the difference when a car gets a top quality paint job. No extras, nothing altered or stuck on, just a simple design in a fantastic OEM colour. It might have taken a colossal effort to get it to this stage – no less than 2000 hours went into the build estimates Dennis – but the end result is, well, effortless and of course stunning.

Dougie SMM Rankine has not set their biography yet

Always love the D-version of record - but this yellow - nice and clean!