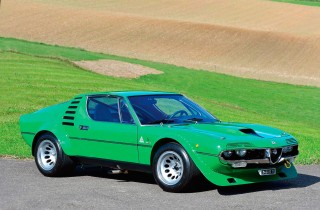 During the decades following World War II, each year, as a sign of international accord and as a way for countries to display the best of all that they could produce, an exhibition would be held entitled World Expo and different countries took it in turn to be the host. In 1967 that country was Canada and one of Italy’s exhibits was Alfa Romeo – a company that was no stranger to special car displays, in particular those designed to ensure punters go home impressed. 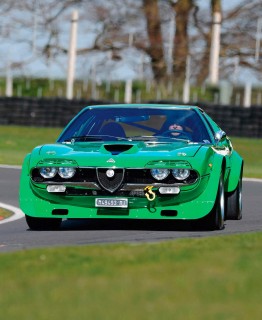 Alfa Romeo had certainly been successful in 1964 at the Paris Motor Show when it unveiled the Canguro. This was a “more harmonious and flowing” version of Alfa’s TZ competition car, according to the Italdesign Catalogue Raisonnee, based on that vehicle’s chassis. It had been designed by Giorgetto Giugiaro before he left Bertone and after he had completed the all-time great Alfa Giulia Sprint GT.

By the time of the 1967 Canadian Expo, the men at Arese had been thinking of a more spectacular car to keep Alfa Romeo at the forefront of contemporary design, so it asked long-time conspirator, Bertone, to come up with something suitably eye-catching. Being the great agitator and organiser of men, rather like Enzo Ferrari, boss Nuccio Bertone handed the project to Miura man Marcello Gandini. The result was a concept car, based on the Alfa Giulia chassis and equipped with the excellent 1590cc twin-cam from that model. It had no name but, because it debuted in Canada, it became universally known as the Montreal. With hooded and slatted lights, a long low bonnet and seven side vents behind the B-pillar, it was certainly eye-catching. Two prototypes were built.

As is often the case – even today – Alfa’s gestation periods from concept to production were prodigiously long and nothing more was heard of the car for well over two years. It wasn’t until the Geneva Show of 1970 that, at last, a definitive car was debuted that was called, officially, the Montreal. John Bolster in Autosport magazine described it variously as “beautiful”, “very attractive” and “important.”

The engineers at Arese had not been wasting their time. This was not just an updated special-bodied Giulia Sprint, but an all-new car powered by nothing less than the race-bred V8 from Autodelta’s Tipo 33 race cars. The 33 represented the company’s return to international sportscar racing, but in the Montreal the V8 was suitably detuned. As a result, Bertone had to redesign the bonnet to allow the engine to fit and the driver’s seat had to be repositioned. The height of the car was adjusted and the width reduced, not entirely helping the originally attractive styling.

The long delay in getting the car from concept to showroom resulted in initial reviews that were not entirely flattering, centring on the fact that the suspension employed a live rear axle as per the Giulia, in order to keep the project within budget. However, not all views were negative; for instance, Road & Track stated in 1971 that: “A few turns around Alfa Romeo’s test track at Balocco… revealed the superb handling characteristics of the Montreal. Advocates of full independent suspension would find it hard to believe that the car has a live rear axle… The fact that the Montreal is the only one of the group [Porsche, BMW, Jaguar] without independent suspension all around should not be necessarily considered detrimental. That V8 engine had started off in 1967 as a 2.0-litre but a 2.5 unit had been developed later on the way to a full 3.0 litres, the maximum allowed for international sportscar racing. These were from Carlo Chiti’s domain at Autodelta and it had been decided to develop a detuned version with a capacity of 2593cc, still with the four overhead camshafts and Spica fuel injection. The end result in the road car was an output of 200hp at 6500rpm.

The long, convoluted and sometimes bizarre story of the Tipo 33 was peppered with weird and stillborn decisions, one of which was to build a road car utilising Tipo 33 parts, the result being the all-time classic T33 Stradale.

Now Carlo Chiti was very commercially minded, of necessity in fact, as Alfa Romeo was a state-owned manufacturer and he was constantly being called to Rome to justify Autodelta’s spending and value for money. If he thought he could see a way for his competition department to make some money he would do it, from selling individual cars to building runs of them. Thus was born the idea, having produced the Stradale version of the T33, to build a competition version – in effect, a road version of a racer was developed and then a racing version of the road car followed! This is relevant because the detuned racing V8 in the Montreal was then developed into a racing unit and made available to anyone who bought a used Tipo 33 for private competition use.

Somewhere along the line, Chiti must have thought that, if the Montreal engine was being developed into a separate racing unit, then why not develop a whole car? Teodoro Zeccoli said that he would often have ideas whilst in bed at nights and arrive at Autodelta the next morning demanding a new project from scratch. Here we have just that: a new Autodelta project. The car featured here is a Montreal, Tipo 105.64, chassis number AR 1425230, developed over the winter of 1972-1973 into a full international racing sportscar compliant with the then-current Group 4 GT racing regulations. It had been completed on 18 March 1971 but did not move on to Autodelta until 27 July, after which it spent the rest of that year being converted into the race car you see here. It was duly tested by both Teodoro Zeccoli and Carlo Facetti. In the UK during the 1960s and 1970s, a Racing Car Show was held every year in London in January. At the 1973 show, John Bolster reported for Autosport that an “aggressive looking” Group 4 Montreal was on display on Alfa’s stand – the very car featured here. The plan was that it was a customer car and that replicas would be built and sold to anyone who wanted to take part in the GT category of the World Sportscar Championship. However, it seems that there were no takers and it disappeared back to Autodelta’s workshops. 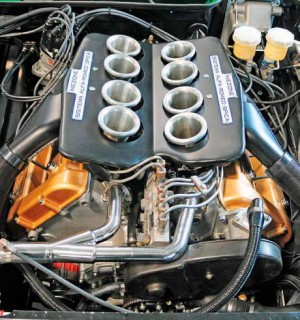 No more was heard of the project until the Nürburgring 1000km round of the World Series when Alfa Romeo Germany, always an enthusiastic organisation for competing with Alfas, turned up for practice at the circuit with ‘our’ car in its bright emerald green livery. It had been sold to the German importer in March 1973. According to Autosport magazine, the only cars entered in the GT class to “break the Porsche Carrera monopoly” were a lone De Tomaso Pantera and the Alfa Montreal which it described as “a very professional effort.”

The car “looked rather frightening on the road” in the hands of its two drivers, Dieters Gleich and Weizinger. Sadly it wasn’t good enough as they qualified 44th overall out of 49 cars. This was mainly the result of engine problems, to the extent that a new unit had to be installed before final practice, but all to no avail. Despite not making the cut, they were allowed to start but similar problems arose during the race and a DNF was posted.

The car was taken back to base and not seen again until Gleich brought it out for a national meeting at Hockenheim on 25 August. Mainz Finthen was next up on 9 September and this was followed by a trip across the border to Belgium for races at Zolder on 30 September, then it was back to the ’Ring on 21 October to finish off the car’s 1973 season.

Over a year passed before 1425230 was in action again, when Dieter Meyer brought it out once more for Zolder on 21 March 1975. Back on home soil on 13 April it was time for the annual Jim Clark races at Hockenheim, followed up just two weeks later at the ’Ring for the Eifelrennen event. Both of these were with Meyer, although it is believed that the final ’Ring event turned out to be an entry-only date.

Almost another year went by before the car was sold to a Hans Stahlberg of Hamburg. Many years later the car was found in a very sorry state, half submerged in water. It was purchased and a full restoration was started by the Alfa and Italian car wizard, Ivo Salvadori of Basel, the superb result of which you see here. We were able to take it up into the hills above the city of Basel, that V8 making its typical Tipo 33 ‘small’ V8 noise and yet it was remarkably tractable – an advantage of the engine being Montreal-spec rather than T33, with 500cc extra over the Tipo 33/2. Nothing is wanting in the way the car goes, stops, handles and looks. At the speeds available on Swiss roads, the experience was nothing like that of the ’Ring on full blast, but enough to appreciate the immense potential of the car. 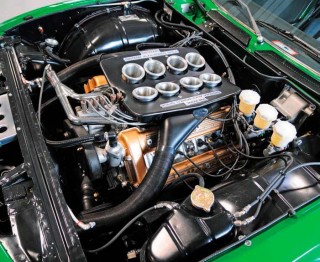 Since nobody proffered their cheque books at that 1973 Racing Car Show, I imagine Chiti lost interest in the project, especially with the pressures of getting the flat-12 T33s up and running. This is a unique Autodelta car – except for one built to similar specification in the USA. I must offer my thanks to Ivo and the car’s owner for a glimpse into what was a fascinating might-have-been.

This very car appeared at the 1973 London Racing Car Show before competing in a few continental races in 1973 and 1974.

Race-spec Montreal 3.0-litre V8 engine has a bellowing soundtrack and no lack of performance. 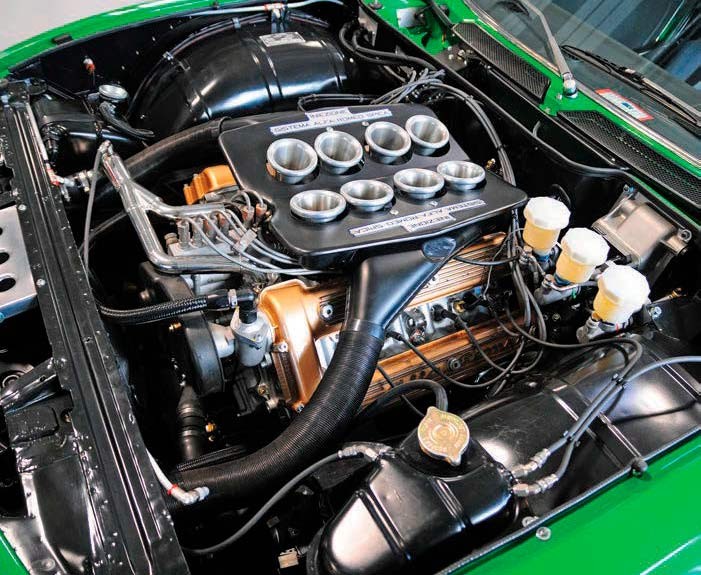 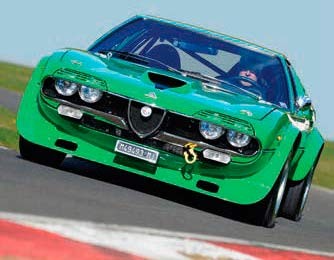 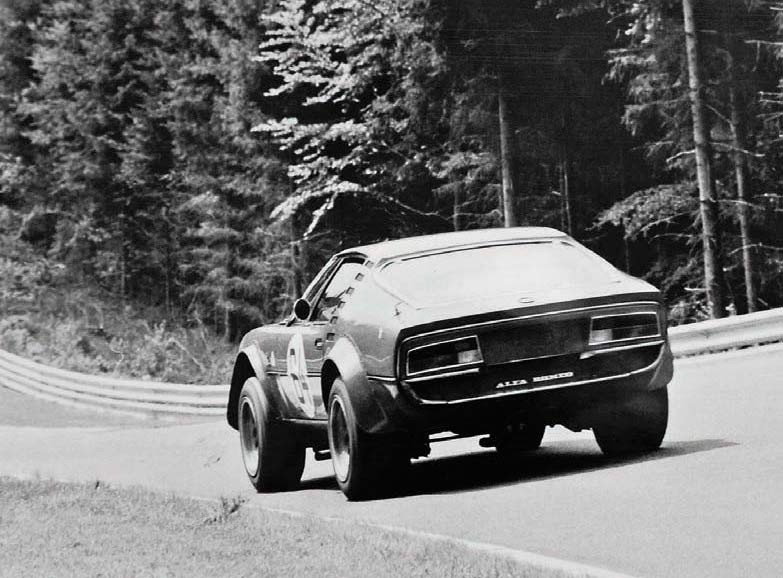 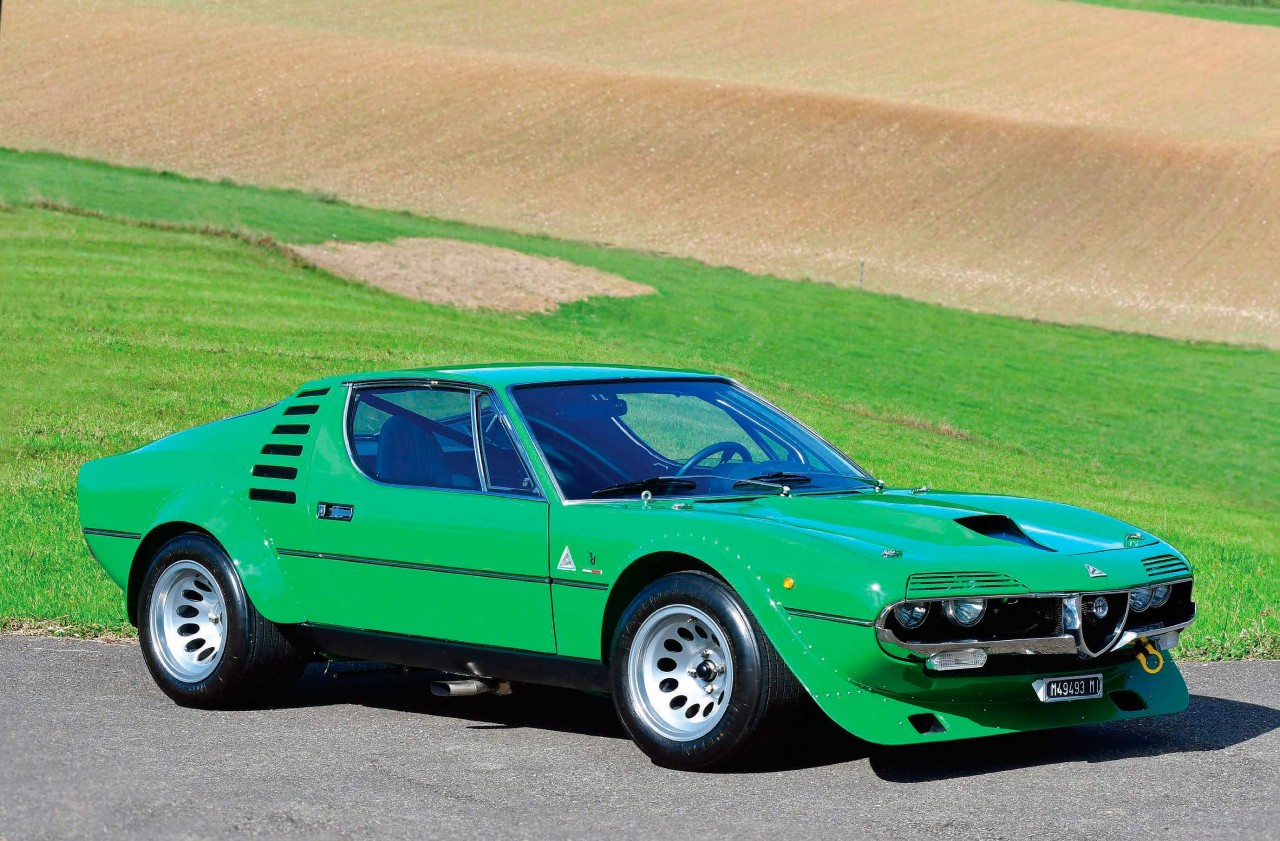 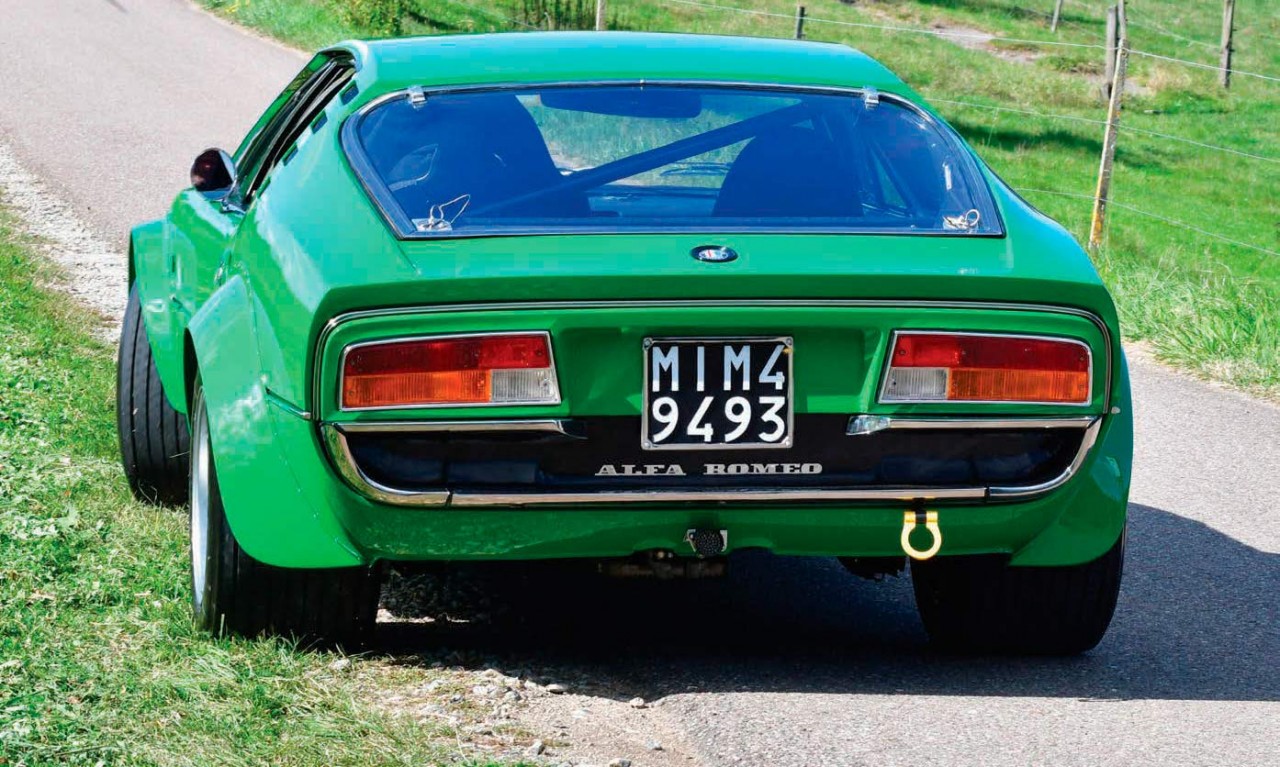 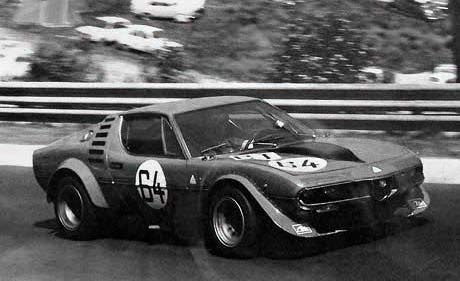 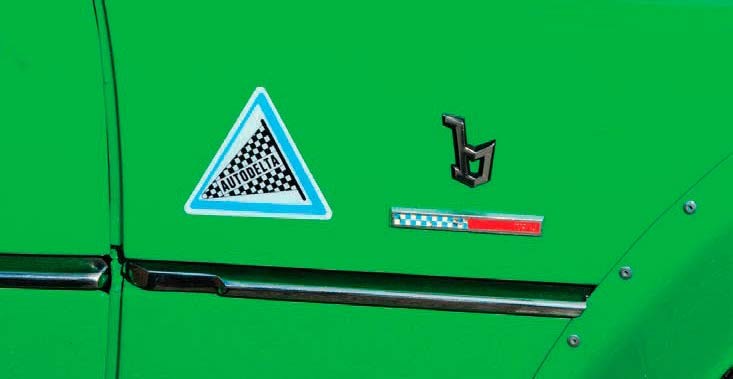 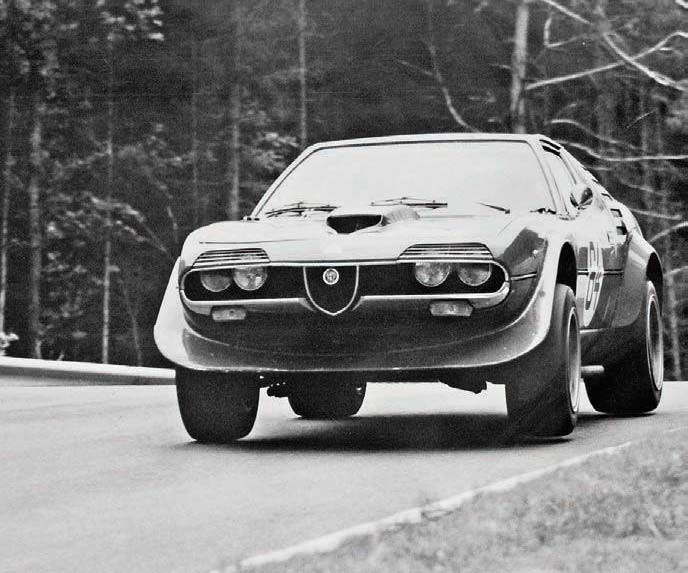 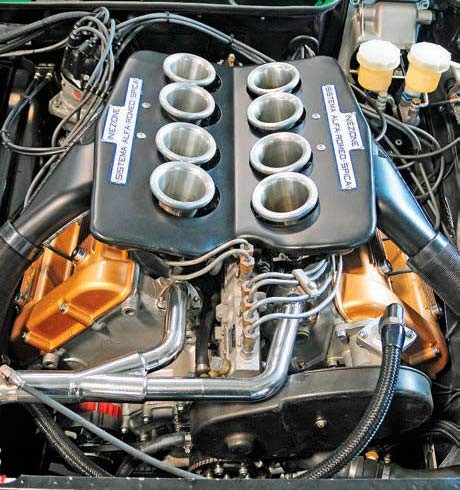 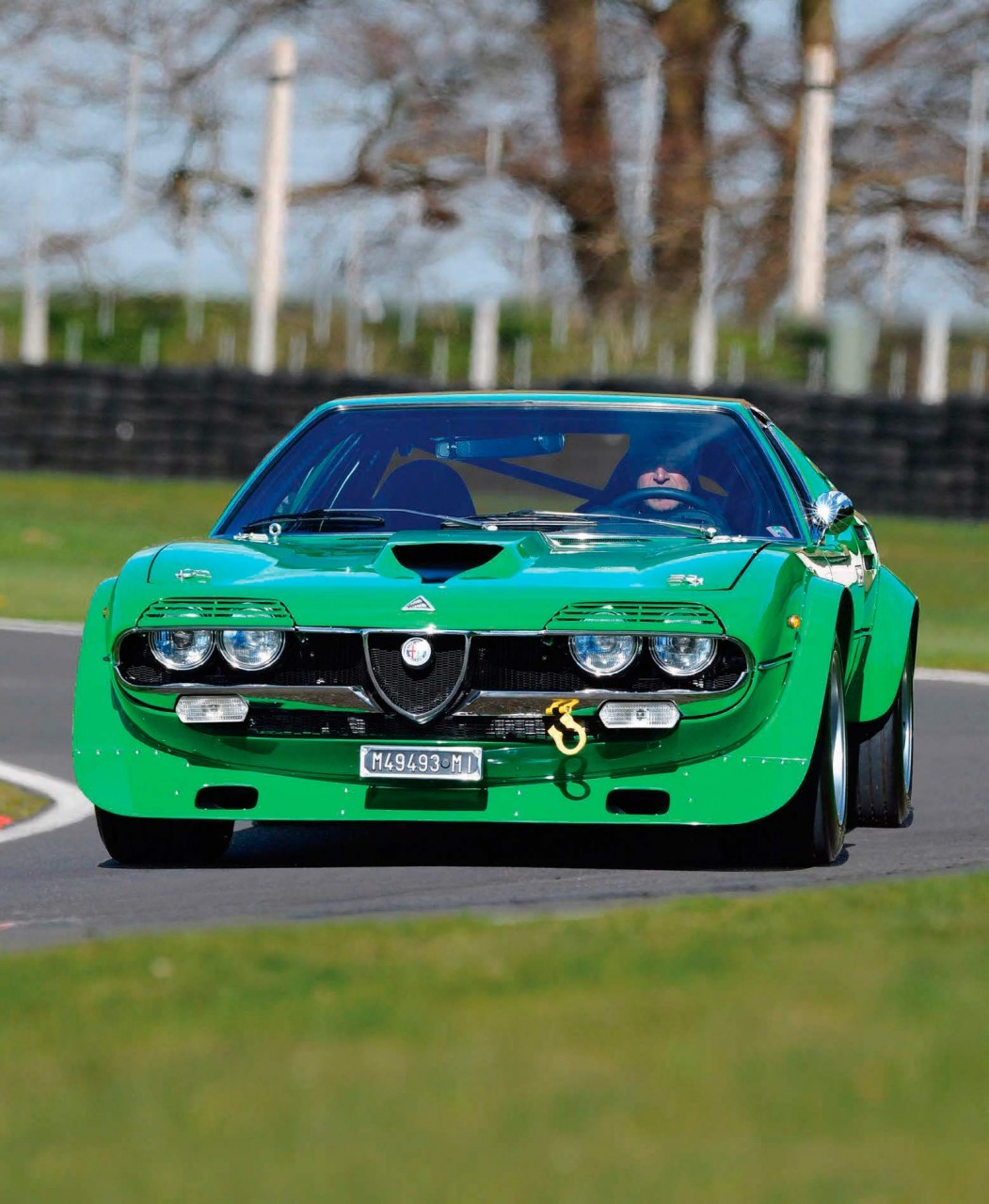 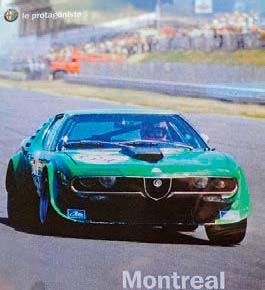