I can’t speak for everyone on BMW Car, but I’ve never been a big fan of the appearance of the 3 Series Gran Turismo. Saying that, it has always looked at its best in M Sport specification and white is a good colour for it too. Updated in the middle of 2016, the 3 GT received all-LED lights up front, mirrored by new LED rear lights. The latter make a big improvement to the appearance, as, let’s face it, the controversy surrounding this car is because of the shape of the back end. The bumpers have been tweaked too, but the overall shape is unchanged, including the automatically deploying rear spoiler – fine on a sporting model, but a little incongruous on a diesel hatchback that’ll spend most of its life on the motorway, we reckon. Just as well an electronic rear hatch is standard on this car, as it’s probably very heavy. 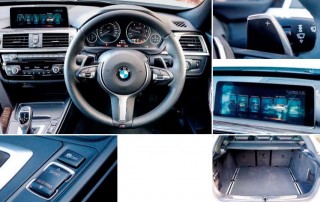 It’s worth remembering, though, that the 3 Series GT is a lot more than a 3 Series with a hatch; it is considerably bigger than the four-door car. BMW quotes dimensions that make it a massive 190mm longer, 79mm higher and 17mm wider. Within those increases, the 3 GT has a 110mm longer wheelbase, which hints at one of its major plus points – interior accommodation. And BMW has even made accessing that space a bit more special for the GT, as it features four frameless doors. The rear ones open wide to reveal considerably more passenger room than in the 3 Series Saloon.

What’s more, there’s a useful extra dose of practicality as standard. Not only do the rear seat backrests split and fold 40:20:40, they can also be tilted. Fold them down completely and they increase the boot capacity from 520 litres to a huge 1600 litres. To put that into context, the 3 Series Touring manages only 495- to 1500 litres. So is the 3 Series Gran Turismo for those that need more space, but don’t want an estate, for image reasons?

BMW enhanced the image of the cabin last year too, with its flat and slim iDrive screen (though not the latest touchscreen item from the 7 Series and G30 5 Series), more piano black trim and electroplated edging to lift the otherwise dark-coloured theme. More trim materials and colours have been added to the options list, too, so it doesn’t have to be all-black inside. The M Sport version gets the usual attractive, chunky M-branded steering wheel, plus M door sill finishers and foot rest. Dakota leather upholstery is standard in the M Sport car too, with a range of colours, including Black with blue stitching as on our test car and classy Coral Red, though make sure you change the standard ‘Estoril Blue’ trim inserts if you go for that…

Thumb the familiar engine start button and the venerable 2.0-litre diesel lump grumbles into life. Once warmed up it’s smooth and, unless you trouble the red paint on the rev limiter, acceptably refined. There’s a 318d variant too, of course, but the price premium to upgrade to the 320d is modest (and negligible if you’re buying on PCP), so it’s what we’d recommend as the extra oomph (190hp vs. 150hp) suits the car. Sure, the extra power gives the GT more straight-line performance, but there’s also effortless progress at all times, even if you’re not nailing the throttle. That’s thanks to the more important jump in peak torque – from 236lb ft in the 318d to 295lb ft in the 320d. Whichever of the diesels you go for, opting for the excellent eight-speed automatic over the standard six-speed manual gearbox is a no-brainer. Yes, it increases the purchase price by a not inconsiderable amount, but that should be recouped come resale time, plus the automatic car is claimed to be more economical. Linked to that is its emissions rating, so the automatic 320d GT means two per cent less Benefitin-Kind tax per year for company car drivers.

Starting off in Comfort mode, the 3 GT lopes along the motorway with ease, the engine quiet and at low revs, the power assistance to the steering high. Response to the throttle in this setting is too dull for my liking though, so I soon found myself defaulting to Sport mode, as it makes the whole car feel a little more alert – even without adjustable damping. The 320d’s engine has plenty enough grunt to unstick the rear tyres if you really want to on an interesting piece of back road, and though the GT’s body control isn’t quite as sharp as the 3 Series Saloon’s, it’s an enjoyable car to drive by any normal measure. You soon adapt to the extra lean on the springs, and the fraction longer it takes for the front end to settle into a corner, but there’s loads of grip, the usual rear-led stance out of a corner taken with enthusiasm and, when you just want to get somewhere quickly and safely, first-rate electronic assistance in the form of the quick-thinking DSC system. You could add M Sport suspension to the specification of this car, and it would no doubt sharpen the dynamics up a tad thanks to the 10mm lower ride height (and hence centre of gravity), but I just don’t think it’s worth the effort. You’re better off revelling in the increased comfort afforded by the longer wheelbase and unique suspension settings of the Gran Turismo.

While I can’t pretend to have been entirely won over by the 3 GT’s looks, it is undeniably a lovely car to own and much better from a passenger’s point of view than the 3 Series Saloon. I can’t speak for us all on BMW Car, but the 3 GT is certainly a grower.

One of the GT’s trump cards is its interior space and huge boot – even bigger than a Touring; new-style iDrive doesn’t have 5 and 7 Series’s touch capability.