Road test BMW 318i E30. There are all sorts of detail changes to the new 3-Series E30 but the heart of the 318i is a new four-cylinder engine. Capable handling, extremely comfortable interior and superb build quality now add up to a package that’s hard to beat.

A BMW doesn’t feel quite right without a full set of options. Or perhaps Autocar has been spoiled by the extras normally fitted to UK BMWs. Whatever the reason, a basic 318i on the German launch felt unremarkable, even though the engine was very good indeed. After a week with a fully-equipped UK example, we were much more impressed.

There are all sorts of detail changes to the new 3-Series BMWs, but the heart of the 318i is a new four-cylinder engine. With 115bhp instead of 105 and more torque throughout the range.it gives the BMW an extra 8mph at the top end and knocks a second and a half off the 0-60mph time.

In truth, the M10 four-cylinder engine was overdue for replacement, its origins dating back to the ’60s although it still forms the basis for the M3 E30 and BMW’s F1 engines. At 84 mm x 81 mm bore and  stroke the M40 is less oversquare (the 318i engine was 89 mm x 71 mm) allowing the bore centres to be closer together. 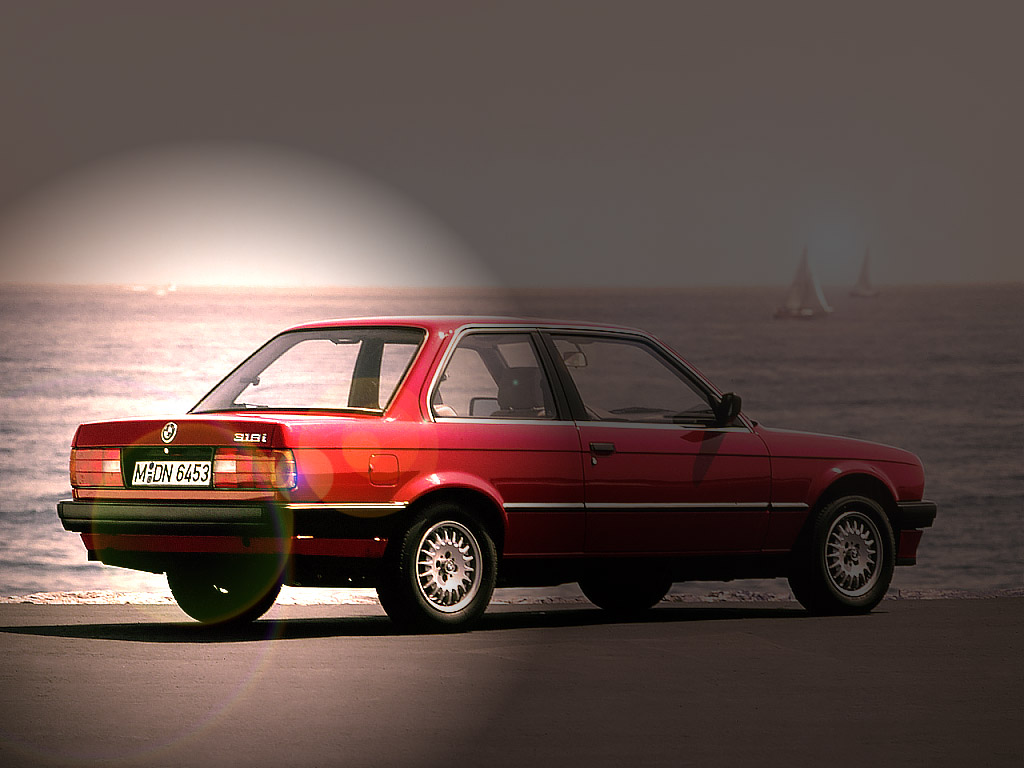 The 84mm bore is the same as the M70 V12 engine in the 750i E32 so the 318i shares its cylinder head design. Combustion chamber shape, the 14 degree valve included angle and spark plug position in the aluminium alloy head are identical, although the exhaust valves are 1mm larger in the 318. Both engines share belt-driven overhead camshafts with rocker arm valve actuation via hydraulic tappets. Long conrods allowed BMW to use short skirt, lightweight pistons, with the combustion chamber partially in-crown.'

Bosch’s Motronic engine management system has replaced the L-Jetronic fuel injection on the old E30 318i, again similar to the 7-Series E32 system and operating the fuel injectors in pairs rather than together. To cut fuel consumption during warm-up, the new engine uses less coolant: BMW claims a 15 per cent reduction in fuel used while the engine is reaching running temperature. The new engines also need much less maintenance — which will be welcomed by anyone familiar with BMW service bills — since the valve clearances, ignition and fuel injection systems are now maintenance-free.

Apart from the M40 engine, the 318i gets the same detail improvements as the rest of the 3-Series: impact absorbing bumpers, a new front spoiler with brake cooling ducts and a new rear spoiler tidy up the exterior, together with larger rear light clusters and a good deal less chrome trim.

A variable ratio rack is fitted to lessen steering effort on full lock, and the 318i gets larger section 195/65 HR 14 tyres. Dipped beam lamps now use the ellipsoid technology pioneered on the 7-Series E32.

Inside a cassette rack and new cloth trim are the only changes. The UK 318i has green tinted glass, central locking and electric mirrors as standard.

BMW’s five-speed gearbox has the same internal ratios as before, but the final drive ratio has been raised from 3.64:1 to 4.1:1. Together with the improved power and torque of the M40 engine, this has transformed the performance of the 318i. The 115mph top speed is achieved in fifth with the engine spinning over smack-on its 5500rpm power peak. The old model would do an identical 107mph in fourth and fifth.

Larger rear light clusters and a new rear spoiler tidy up appearance. Much of the previous chrome trim has been removed.

Inside, a cassette rack and new cloth trim are the only changes. Owners can still revel in BMW's 'driving environment': clear dash, good seats.

Sixty mph now comes up in 9.3secs, a full 1.6 secs quicker than before, while 100mph is reached in 31.9 secs against 45.1. Acceleration in the gears is similarly improved, 50-70mph for example now taking 6.5 secs in third gear compared with 8.3secs. With rear wheel drive, getting the BMW off the line provides no problems — just ease the clutch out quickly with 3700rpm on the clock and the 318i sprints to 30mph in a very creditable 3.0 secs. This performance hasn’t come at the expense of fuel consumption either — we managed an average of 27.4mpg, giving a range of well over 300 miles from the 12.1-gallon tank.

Although the front disc/rear drum braking system is carried through from the old 318i, the friction material is an asbestos-free blend. ABS is not fitted, but pedal weighting is sufficient to prevent panic locking of the wheels in the dry. We managed a best of 1.1g for 50lb pedal load and the brakes proved reasonably free of fade.

Quite rightly, BMW has an enviable reputation for creating a ‘driving environment’. Instruments are clear and well placed, as are the switch gear and minor controls, although the value of the economy meter in the lower half of the tachometer is questionable. The seats are well-shaped, supportive. Apart from the normal slide and backrest tilt adjustments, you can alter the height on a curved track. With the optional manual sunroof, taller drivers will need the lowest position to get enough head and legroom.

As well as the sunroof, our car had optional alloy wheels, electric windows, heated mirrors and door lock, and power steering — a total premium of more than £2000. The power steering is a substantial improvement, giving low gearing at four turns lock to lock but the manual version’s extra 0.8 turn is the wrong side of manageable.

The steering is pleasantly weighted with good feel and excellent straight-line stability. On faster comers the 318i is a satisfying car to drive, remaining neutral until the onset of slight under- steer near the limit. With the relatively modest power output of the 1.8-litre engine there is no trace of the tail happiness attributed to the semi-trailing arm rear suspension on more powerful models, even if the throttle is lifted in mid-corner.

The mid-range punch of the engine comes into its own on twisty roads, the 1987 318i E30 needing less downshifting to keep it on the boil than its rather peaky predecessor. You don’t need to approach the 6000rpm red zone, and indeed the rev limiter cuts in 100rpm below the 6400 absolute red line. The engine still feels and sounds like a four-cylinder, lacking the silken power delivery and delicious noise of the six-cylinder models, but there is no real roughness to the power delivery — a weighty flywheel that can be felt on gearchanges can take some of the credit for that.

BRAKING Fade (from 79mph in neutral)

Response (from 30mph in neutral)

Figures taken at 1360 miles at the Motor Industry Research Association proving ground at Nuneaton and the General Motors proving ground at Millbrook. All Drive-My test results are subject to world copyright and may not be repro­duced in whole or part without the Editor's written permission