Grand all over again. Superformance Corvette Grand Sport Superformance has resurrected Arkus-Duntov’s moonshot as a continuation model and it’s a joy to behold!

The Sixties was an unusual decade for car makers in America. In an era before serious governmental regulation, designers had very few restraints to work around and thus could make cars that look somewhat futuristic even now, more than 50 years later. The technologies available to manufacturers were rapidly expanding as well, with things like fuel injection and disc brakes being offered on production cars. Despite all this freedom of design and new technology, the labyrinthine and often inscrutable nature of the corporate culture at GM often stifled real innovation, except when it came to the Corvette.

The venerable ’Vette served as a testbed for things to come on the General’s more pedestrian offerings and the Corvette programme’s spiritual advisor and biggest proponent, Zora Arkus-Duntov, made sure that it was always on the bleeding edge of technology. The culmination of this ethos was the failed homologation of the now legendary Corvette Grand Sport. Until now, the incredible Grand Sport has been beyond the reach of all but the wealthiest collectors but thanks to Superformance and their excellent continuation model Grand Sport, those of us with more modest means (relatively speaking!) can now know what it felt like to mat the throttle on one of these incredible machines.

The Grand Sport programme was the brainchild of famed Belgian engineer and race car driver, Zora Arkus-Duntov. He wanted to create a car that would not only compete with offerings from Ford and Chrysler but with the best that Europe could produce. His plan was extremely ambitious with a goal of producing 125 of the highly modified Corvettes to race at Le Mans, and perhaps due in part to that ambition and also due to GM’s somewhat draconian stance on factory racing, Arkus-Duntov was only able to build five units before the bosses shut the programme down. This rarity has made the Grand Sport not only the most valuable Corvettes around, but among the most valuable American automobiles ever produced.

The Corvette Grand Sport was really only a Corvette in name and shape. Nearly every aspect of it was changed in anticipation of its life on the racetrack. The sleek shark-like body of the C2 Sting Ray was massaged and expanded to fit bigger tyres and more cooling and made from thinner fibreglass; the Grand Sport also did away with the production car’s 63-only split rear window. The ladder-style chassis used increased bracing and additional cross-members for added stiffness and the body structure was made with aluminium rather than the production car’s steel to reduce weight. These modifications, coupled with a whole host of lightweight parts, gave the Grand Sport an almost unbelievable kerb weight of 1900lb, some 1350lb lighter than a production Sting Ray.

With less than a ton to push around a racetrack, the Grand Sport would have been fast no matter what engine was in it. In fact, they raced with several engine configurations, but the most potent version was an all-aluminium 377 cubic inch small-block V8, fed by four huge Weber side draft carburettors bolted to cross-ram manifolds. In addition to being just about the sexiest motor ever fitted to a GM product, this engine was good for 550bhp at 6400rpm, effectively turning the featherweight Grand Sport into a rocketship.

After the Grand Sport programme’s cancellation by GM’s brass, the cars made their way into the hands of privateer racers where they continued to find success, albeit with a more conventional big block engine. Zora Arkus-Duntov managed to clandestinely support these privateer customers even after management’s racing prohibition. During the Grand Sport’s short career they were raced at many tracks such as Daytona, Sebring, Road America, Nassau (where they thoroughly trounced Shelby’s less refined Cobras), Watkins Glen and Mosport. The cars were piloted by a veritable who’s who of Sixties road racers including AJ Foyt, Jim Hall, Don Yenko, Delmo Johnson and Roger Penske.

While all five original Grand Sports survive to this day, their stratospheric price tags in excess of five million dollars mean that none of us mortals will ever be lucky enough to park one in our garage. Fans of the Grand Sport are not totally out of luck though, as Superformance, who (thanks to the newly passed Small Volume Manufacturer Bill) are now offering fully functional Grand Sport continuation models for a fraction of a fraction of a percent of the price of a real one. These are no mere kit cars either; they have been carefully engineered to offer the same driving experience of the originals without the soul-crippling fear that you might wreck it at any time and ruin a piece of history.

Superformance built their reputation as a builder of high quality Cobra replicas that they imported from their South African factory and sold as rolling chassis. The quality of their cars was such that even the cantankerous old chicken farmer himself gave them his stamp of approval. From Cobras they branched out into Daytona Coupes and eventually GT40s, all offering an unmatched driving experience to cost ratio. With their 1963 Corvette Grand Sport continuation model they have left the world of the blue oval and branched out into new territory but they have approached this project with all of the care and reverence one might expect of a company with a reputation like theirs.

The Superformance Grand Sport is fully licensed by General Motors and can be had in either a coupe or roadster configuration, just like the originals. Prospective owners have several engine choices available to them from the perfectly serviceable 350bhp ZZ4 iron small block, to the all-aluminium supercharged slavering hell beast that is the LS9. The Grand Sport also benefits from other modern touches such as four wheel power disc-brakes and Bilstein coilover suspension with H&R springs to further aid body control. Steering is done through a quick rack and pinion system rather than the recirculating ball system of the C2. Coupe owners who lack masochistic tendencies will take advantage of the optional air conditioning system and power windows, while roadster owners will just have to take advantage of God’s own air conditioner, the throttle pedal and an open top. The gorgeous fibreglass body is coated in sumptuous PPG paint for a show-quality finish, something the originals never had.

Lance Stander, president of Superformance, said: “The Grand Sport represents a bit of a new direction for us. We wanted to provide something to the Chevy guys out there that would get their hearts pounding and not bankrupt them. I think we’ve absolutely succeeded. The Grand Sport is an absolute riot to drive and has such a different feel from our Cobras and Daytona Coupes. If you ever have the chance to drive one, it’s an opportunity that isn’t to be missed.”

All in all, the Superformance Grand Sport represents absurd value for money. It is likely to be faster, safer and more engaging to drive than the original and while it lacks the pedigree that Mr Arkus-Duntov’s originals had baked in, the fact that you don’t need to have the equivalent of a small Central American country’s GDP in your bank account to buy one more than makes up for that. The Grand Sport, both in the way it looks and the way it drives, manages to get under your skin and push all those buttons that modern cars just can’t reach. It rewards skill and punishes the careless. It’s easy to drive quickly but takes dedication and patience to drive fast and thoroughly rewards those who put in the effort.

Dick Thompson is one of the most successful Corvette racers of all time. Beginning in 1956 he raced Corvettes all over America and in various other nations including France, where in 1960 he and Fred Windridge co-drove the #2 Cunningham Team Corvette at Le Mans. Five of Thompson’s nine total SCCA national championships were earned driving Corvettes and he also enjoyed many important race victories in a Corvette, including the GT title in the 1957 12 Hours of Sebring and the first win in the legendary Corvete Grand Sport. Image credit: Wieck 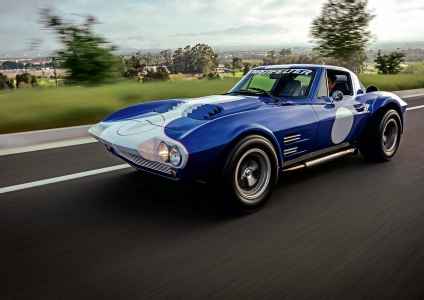 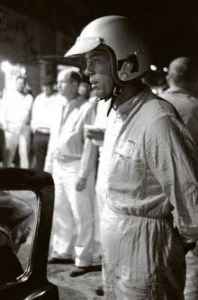 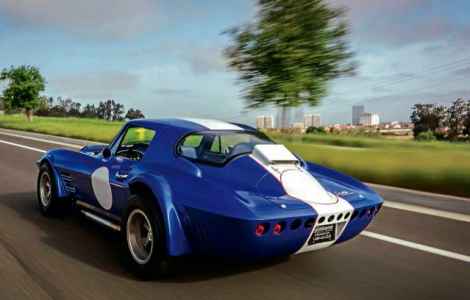 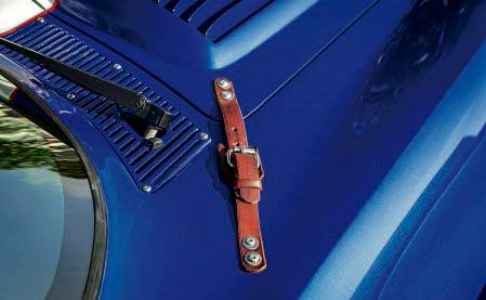 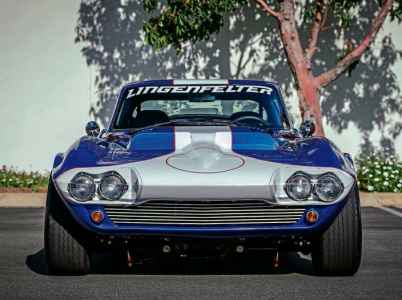 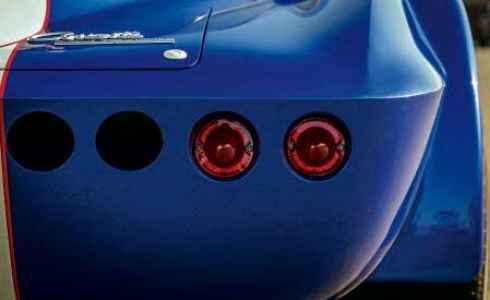 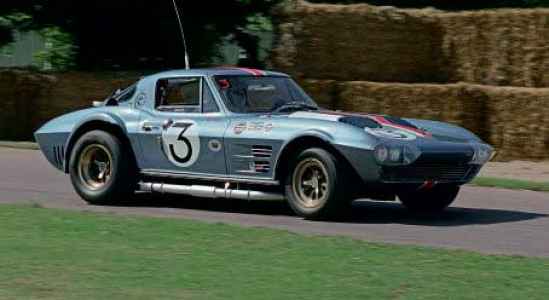 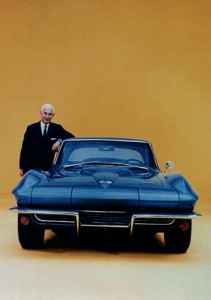 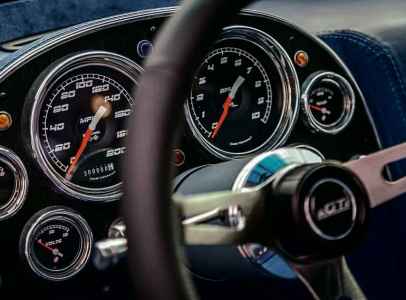 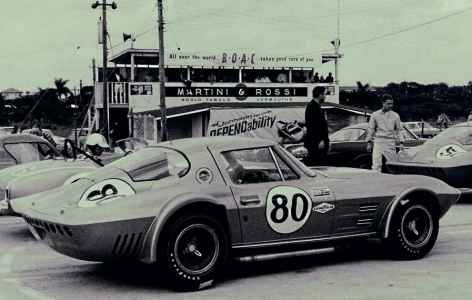 Grand Sport Corvette at the 2003 Goodwood Festival of Speed. Image credit: Steve Havelock Original steering wheel design and blue touring interior. Zora Arkus-Duntov and ’Vette. This Corvette Grand Sport is outfitted with a specially prepared Lingenfelter LS7 making 592bhp. The 1963 Corvette Grand Sport did away with the iconic split rear window and was around 1350lb lighter than a production Corvette.