The Custom Royal was Dodge’s top trim level in the Fifties, offering a stunning mix of luxury, performance and value. After a dedicated restoration, this rare convertible is fit for a king. Words: Nigel Boothman, Photography: John Colley.

You got a lot for your money in 1957, at least you did if you visited a Dodge dealer. We think the base price of this car when new was $3635, which was a $500 bump up from the regular Custom Royal convertible thanks to the high-performance D500 specification. This one is actually quicker still; a Super D500 with two four-barrel Carter WCFB carbs feeding the hemi heads on the 325cu in V8. But $3635 was still $1000 less than the cheapest Chrysler convertible -– basically the same car, remember – and $1500 less than the least expensive rag-top Cadillac.

Despite the saving, you’d expect this Dodge to show them both a clean pair of heels: with 310bhp it had more than the Cadillac and was only 15bhp down on the 392cu in Chrysler, but weighed 400lb less. It’s been hard to find exactly what came as standard with a Custom Royal D500 but you certainly got a Torqueflite transmission and possibly larger brakes and power steering too. All the exterior flash that distinguished it from lesser Coronets and Royals was naturally included in the price, along with fully carpeted floors and bench seats wrapped with brocade-type cloth for the seating panels and vinyl around the bolster areas.

The first owner of this car undoubtedly racked up a few hundred dollars more on options. There are six-way power seats, an electric clock, a radio and most exciting of all, the Highway Hi-Fi record player. This remarkable bit of kit was the first factory-fitted in-car record player (unless you know different?), making its debut in Chrysler Corporation products in 1956. It aimed to overcome some of the obvious problems of playing records in moving cars by using its own specially pressed discs, designed to rotate at 16 2/3rds rpm and with extremely dense content – 550 grooves per inch, giving about 45 minutes of music per side or up to an hour of speech, despite only occupying the same space as seven-inch 45rpm singles. Higher stylus pressure kept the needle on the record over less-than-perfect road surfaces.

Nowadays these discs fetch a lot of money when they come up for sale, despite a rather limited choice of music and the fact that the Highway Hi-Fi, for all its innovation, never actually worked very well. Chrysler began to feel the pinch from frequent warranty claims pretty quickly and removed them from the options list after 1958. It was one of a series of quality control problems that dogged the ’1957-’1959 Chrysler/Dodge/Plymouth ranges when the new Forward Look bodies arrived, which perhaps contributed to these cars being a rare sight nowadays, especially over here.

We wouldn’t get to see this one without a man called Gary Sanders. Gary is really a Harley-Davidson guy, with quite a few of them keeping a solitary Indian company in the garage. But he’s always admired American classic cars of the Fifties, a feeling that intensified once his work took him on regular trips to the US. Eventually, with retirement approaching, Gary found himself in a position to look for something to buy. In Phoenix, Arizona he visited a large classic car dealer with perhaps 50 or 60 machines to choose from. Gary’s number one target was probably a Chrysler 300C, but they’re hard to find in top condition (the convertibles even more so) and fetch enormous sums. In Phoenix he found something that offered an excellent substitute.

“The dealer said this Dodge had been through a two-year restoration, but the previous owner had developed health problems which meant it was being sold without really being used,” he says. “I’m an engineer and I tend to be quite particular about whether something has been done right – anything that doesn’t line up tends to catch my eye. I went right over this car for a couple of hours and I just couldn’t fault it.”

A detailed history for this car was sadly lacking, as is often the case with American purchases unless they’ve been with the same family since new. But Gary was satisfied that the restoration had been done to an extraordinary standard, probably costing more than the asking price. Gary and the vendor eventually came to a deal, leaving only the challenge of shipping an immaculate 17ft 8in classic from Arizona to Cheshire without spoiling it. Fortunately, Gary had a solution.

“A pal of mine brings in high-end Harley Davidsons and is used to containerised shipping,” he says. “It was going to be an extra £850 to put the car in its own container from Texas all the way to my house, but I decided it was worth it.” Gary even took the precaution of contacting some friends in Texas to go and check the condition of the car as it awaited shipping in Galveston. Fortunately, it had escaped any damage in the trip from Phoenix and duly arrived in the UK as smart as it had been when Gary first saw it.

After a long restoration and an unknown period off the road before that, a few teething troubles were inevitable. “The brakes pulled badly to one side,” says Gary. “I dismantled them and rebuilt them and it’s much better now. I also fitted new tyres; some radials that look exactly like the original cross-plies. It’s made a considerable improvement to the car’s behaviour on the road.”

Perhaps the most interesting work to the car has been the modification of the Highway Hi-Fi. We weren’t kidding when we said the records were expensive – at the time of writing, three were for sale together on eBay in America for $450. What do you get for that? Two discs of music from little-known light jazz orchestras and a radio play of George Bernard Shaw’s Don Juan in Hell. You’d have to be a stickler for originality, wouldn’t you?

Gary is quite dedicated, in that everything has to look right, but there are limits. He discovered that Tadpole Radios in Essex could convert the Highway to work with conventional 45rpm singles, while also adding transistorised circuitry to the valve radio to allow a Bluetooth interface and wavebands other than the original AM range. All with zero external difference…

“It’s been great – it was far from cheap, but with a couple of large speakers they supplied that are hidden under the seats, it’s almost as though you’ve got surround sound in the car now.” The original signal-seeking button on the floor, adjacent to the dipswitch, still functions too. It’s one of many things that Gary enjoys about driving the Dodge.

“At 60mph on the dual carriageway it’s brilliant. It stops well, it picks up really well with a surge of power that makes the bonnet lift up. The power roof is an exceptionally good fit so it’s surprisingly quiet at speed with the roof up. I guess it’s a bit wallowy in corners and it shakes when you hit a pothole, but in most ways it’s a pleasure to drive.”

The ’1957 Chrysler Corporation products probably wallowed less than most rivals, thanks to the new X-braced chassis and torsion-bar front suspension, aided by anti-dip control arms and an anti-roll bar. One of the other features of these striking new Virgil Exner-designed bodies was their rubberised mountings to the chassis frame: great for silent isolation on smooth roads, but liable to allow lots of scuttle shake when you struck a bump.

It sounds as though most of the other rattles and leaks that caused owners to frown back in the day have been carefully engineered out of this car during its exhaustive rebuild – it must be better than new. We believe only 399 Dodges were ordered with the D500-1 twin-carb set-up in 1957, with perhaps just a handful being Custom Royal Convertibles. If Gary is able to research the history of his fabulous example and show that the restoration has retained the original specification, it may turn out to be even more special than it looks.

But not everything about it is perfect…Gary admits the electric clock doesn’t work and it’s been a struggle to find anyone willing to try fixing it. Another tiny fault took a very knowledgeable pair of eyes to spot it, as Gary recalls. “The car has Lancer emblems on each tail fin; there’s a lance and a shield with the outline of a knight’s helmet. I was at a show last year when someone came up and said ‘Do you know your Lancers are pointing the wrong way?’ It was news to me…the lance should be pointing to the front of the car on each side, so I swapped them over.” I think we can forgive one little oversight. It’s great that people like Gary can bring such cars to the UK… and its no shock that it won Car of the Show at Tatton Park’s Stars & Stripes on its first visit there in 2017. Fit for a king, indeed. 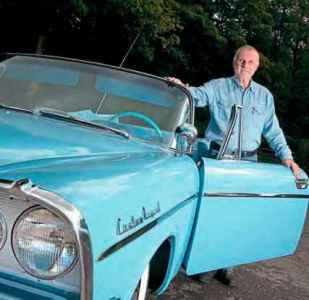 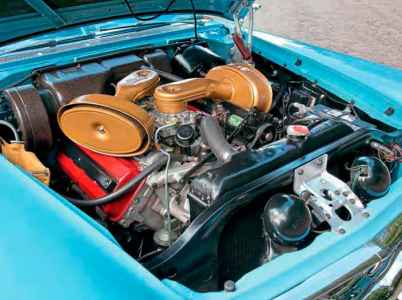 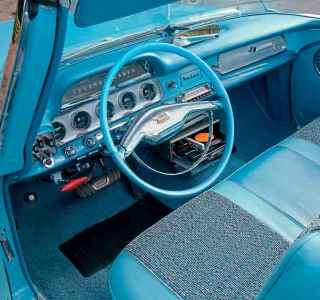 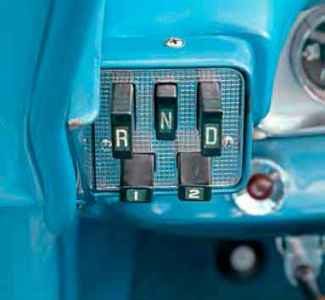 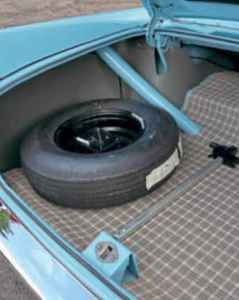 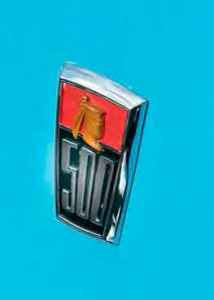 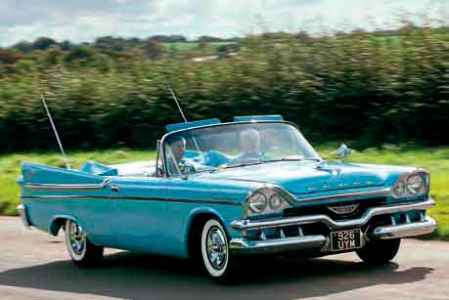 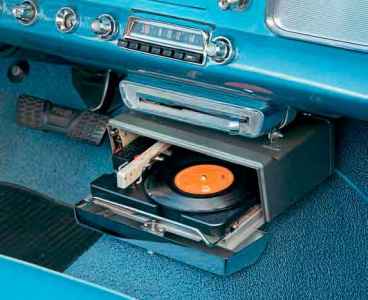 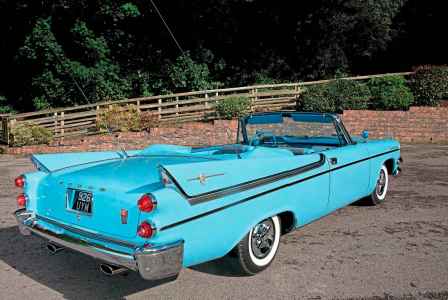 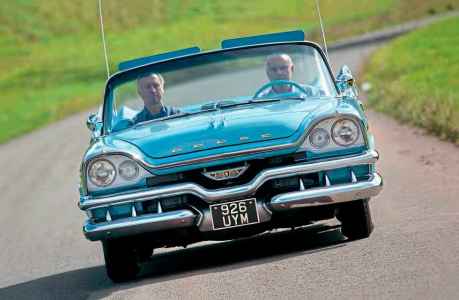 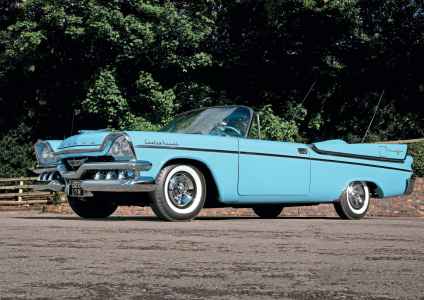