Aristocratic, noble, high-born, titled, elite,’ says my dictionary. I’d never looked up the word patrician before, but I’d assumed it meant something of that sort. It’s a good name for a high-end luxury car – much less obvious and clumsy than calling it the Packard Nobleman or the Packard Grandee. The model had only a five-year life, starting in 1951 and ending in 1956 when the last proper Packards disappeared and the disaster of the merger with Studebaker took hold. But throughout that short run, the Patrician was always Packard’s top-of-the-line four-door.

In 1955 it sat alongside two other senior Packards; the Four-Hundred (a two-door hard top coupe) and the Caribbean convertible, by far the most famous and these days the most sought-after for its scarcity and glamour. Today, the rare Caribbean may survive in greater numbers than the Patrician. Only 500 Caribbeans were built, but they sold at a sky-high $6000 compared to less than $3900 for the Patrician. They were cherished from the start and tended to be the kind of cars that avoided the wrecker’s yard. Of the 9127 Patricians built in 1955, we think this is the only one in the UK.

These sunny-day shots show off this impressive Packard as it should be. What looks like a simple three-box shape without the swoops and contours of later Cadillacs and Chryslers is actually packed with well-thought-out features. To describe it properly, you need your Packard vocabulary book.

Those architectural-looking rear lights are known as cathedral tail lamps. That metallic section between the two bright side-spears on the front fenders and doors was called ‘tin foil’ side-trim, at least by most people outside Packard’s marketing department. The windscreen is not merely wraparound but ‘sweep-around’, while the piece of brightwork at the leading edge of each rear fender is a ‘vertical vent’. Not that it has any holes in it or ventilates anything, but it’s the easiest way to spot a senior Packard when compared with the more lowly Clipper series – instead of the ‘vent’ they have a downward sweep into the rear fender and no continuous straight trim line to the front wheel arch.

The way that all the various tones and finishes are separated by trim lines helped Packard to offer two- and three-tone finishes with the minimum of tricky paint masking. Also, many styling features you can see on this Patrician were claimed by Packard as practical, functional pluses. The company’s main 1955 brochure tells prospective buyers how the contours of that deep, highly curved trunk lid allow excellent access and conceal a huge space – both undoubtedly true. The tasteful tail fins are intended to be visible to the driver, making parking a cinch, while the space-age look of those exhaust tips inside the bumper mouldings keeps the vulnerable pipes high up and away from damage.

The ’55 brochure also goes into proud technical detail about the Torsion-Level Ride and the Twin Utramatic Drive, with a page boasting of the firm’s first OHV V8: with 352 cubic inches, 260bhp and 335ft-lb of torque, it was a class leader. Indeed, they billed it as the world’s most powerful engine, which for a few months it probably was. But perhaps we’re better hearing about those features from the man who gets to experience them whenever he takes the car out.

Martin Skipper imported the Packard in the summer of 2015 in the immaculate condition you see here, and despite wide experience of other American and British classics, he was blown away by the way it drove: “It’s like a new car. It feels more like a Rolls-Royce than an American car and it’s whisper quiet,” he says. “The ride is superb, thanks to that clever torsion bar system.”

We’ve had a few stabs at explaining Torsion-Level Ride in Classic American over the years, but it’s worth a brief recap. The back axle is attached to two trailing arms, hinged to the chassis at their forward end. Also attached to each trailing arm is one long torsion bar running right up to the front suspension, and one shorter one going to a cross-member, meeting a transverse rod connected to an electric motor. This motor could add or remove preload to the shorter torsion bar on each side, which altered the rear ride height.

Another small rod called the compensator control rod connected the main left-hand torsion bar to a control box, signalling how much twist was applied to the torsion bar and therefore how low the back of the car was riding. The control box would then tell the motor to apply the correct amount of preload to bring the ride height back to standard. As well as making the car immune to heavy loads, the system reduced dive on braking and squat on acceleration. And because the front and rear suspension was interconnected by the long rod, potholes and dips didn’t upset the smooth, level ride either.

So why was Martin’s car standing up at the back like a hot rod? The system seemed unnervingly complex to diagnose, with a trembler coil inside the control box and a couple of limit switches, any of which may have failed. “I went on the Packard Club forum to try and identify the fault,” says Martin. “The suggestion was to replace the switches and the control box, so I bought the parts and began to fit them with a friend of mine, an engineer who runs a classic Buick.”

So far, so sensible. But the Packard had a surprise in store for Martin: “While this was going on, I was doing something in the car and knocked a switch under the dash. It was actually a round knob like all the others, and I’d previously turned it but nothing happened. Turns out it moves up and down… and if you move it down, the rear suspension goes back to its normal level.”

Packard’s semi-secret manual height override switch can add as much as nine inches to the standard 10 inches of ground clearance between the back of the sill and the Tarmac. The dealer must have raised it to help the car clear the ramps when it was loaded for shipping, and forgotten to mention this little feature to Martin. And speaking of dealers, it’s time to explain how a 60-year-old car has survived until the present day in such immaculate nick, and with only 46,000 miles on the clock.

The first owner ran a Packard dealership in Rock Falls, Illinois. We think the business may have been A J Pratt of 410 Locust Street, Sterling, which is the other half of the town of Rock Falls, separated by the Rock River. It’s a small place about 100 miles west of Chicago and that initial owner seems not to have ventured far outside Whiteside County, if the mileage is anything to go by. After 14 years of use, the car was placed in storage for 20 years, during which the original owner died. When his family put it up for sale a gentleman called Steve Wyldaki bought it and drove it home – a testament to how carefully it had been stored and looked after in previous years.

Mr Wyldaki drove it around for a year and a half before deciding to tidy up the engine bay. This job ballooned into a full restoration that Mr Wyldaki completed with his two sons, finishing in 1993, by which time the car was still only showing 35,000 miles. The Wyldakis did the mechanical work and sent the car away to be professionally repainted. They also went to extraordinary lengths to obtain the right brocade fabric for the seats. It seemed to be unavailable through any supplier, so by using a combination of a computer print-out of the pattern and a scrap of the original material protected under the seat to give a correct colour, they were able to commission an upholstery supplier to make some purely for this car.

Mr Wyldaki eventually passed away and his family sold the car on to Gary Severns, a car collector in Long Beach, California. He had up to 15 other Packards and a couple of full-time mechanics to restore and maintain his cars, so the Patrician had found yet another good home. The only major piece of work Mr Severns commissioned was a change from the original Twin Ultramatic Drive to a Chrysler Torqueflite. Such are the problems with keeping the old Ultramatics healthy (they were never uber-reliable, and with only two years of production life, parts are a serious problem) the Packard Club has created a kit to make the Torqueflite swap as straightforward as possible and keep those ’55 and ’56 cars on the road.

To bring us right up to date, Mr Severns found a very expensive older Packard that he had to have, so the Patrician went to The Vault Classic Cars in Fullerton, a satellite town to Los Angeles and the place where Leo Fender started making electric guitars. Martin Skipper had bought two cars from The Vault in the past and liked what they offered. He’d been hankering for a Packard for a while, and when he saw the Patrician on The Vault’s website in 2015 he picked up the phone. In July of that year, Hill Shipping (call 01795 876 000) or see www.hillshipping.com) dropped the car off at his home in Cheshire.

It joins a 1947 Hudson Super Six, a ’55 Buick Special fourdoor hard top, a ’96 Buick that’s Martin’s everyday car, a ’58 Ford Country Squire and a ’49 Cadillac Fleetwood that’s under restoration. With a garage like that, you have a high-quality problem: which one to take out?

“I love going to shows and I’m at Tatton Park three times a year, plus various other local ones,” says Martin. “The Packard is such a delight to drive, but so far the longest trip I’ve made is only about 20 miles. I’m looking forward to this season because I’ll probably take it much further, down to the Pre-50s AAC’s Rally of the Giants.” We can’t wait. There’s something about this hand-finished, high-quality Patrician that suggests it would be more at home among its pre-war ancestors than anywhere else. 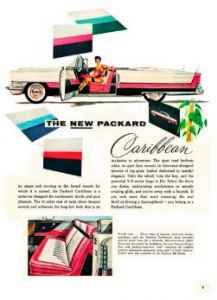 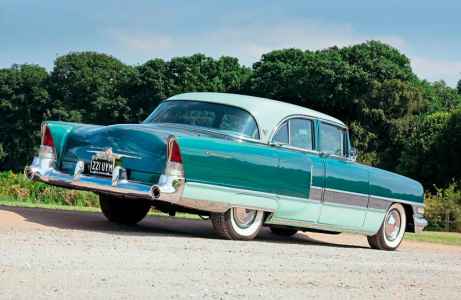 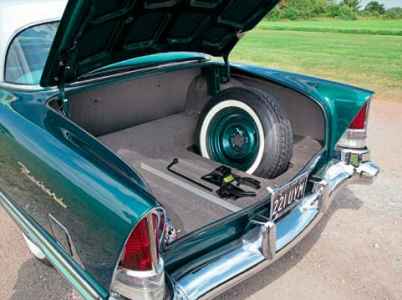 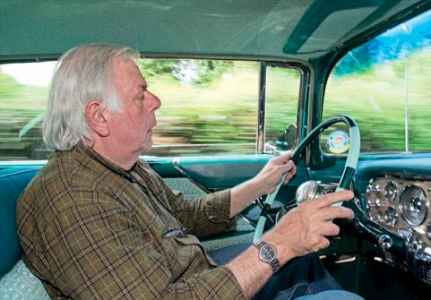 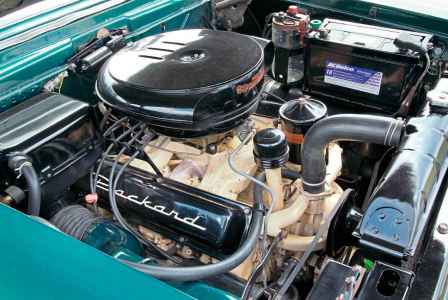 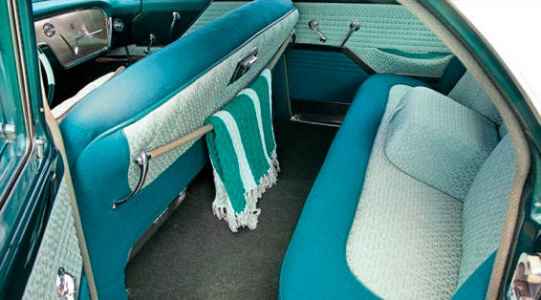 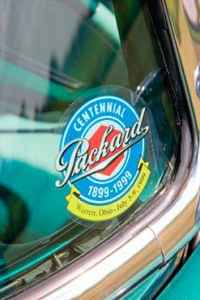 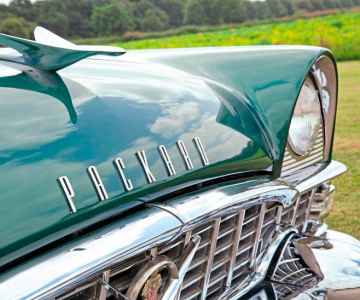 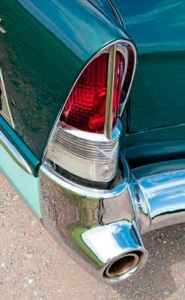 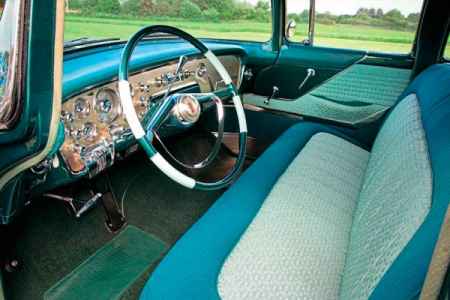 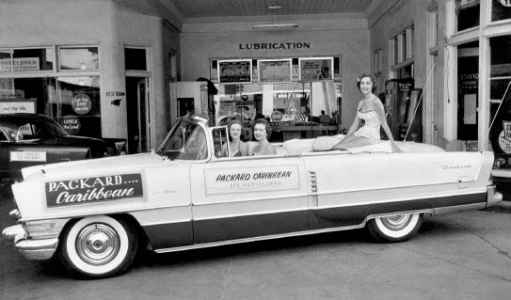 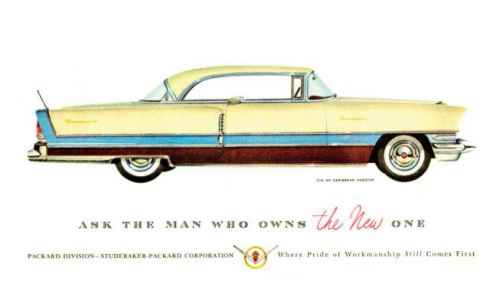 Packard’s Caribbean topped the glamour stakes. Interior fabric was painstakingly recreated. Who needs seatbelts when you have a grab cord and an ash tray? Exhausts exit through the bumper, as was fashionable in the Fifties. 260bhp 352cu in V8. Martin Skipper has an eye for unusual, beautiful American cars. This is what 46,000 miles looks like. The Caribbean was Packard's ‘Halo’ model.