A world of firsts for Ferrari as its new SF90 Stradale flagship goes digital… in more ways than one. By Jake Groves.

Change is in the air at Maranello – how else do you explain an all-wheel-drive Ferrari flagship with a V8 engine in place of the V12 that ruled through the F50, the Enzo and the LaFerrari? The SF90 Stradale might be four cylinders short of a dozen but electric power more than makes up the deficit. Yes, the SF90 – a bombastic new halo car for Ferrari’s rejuvenated range and a nod to the Scuderia’s 90-year anniversary – is also Maranello’s first-ever series production plug-in hybrid, not to mention its first-ever all-wheel-drive supercar. ‘One of Enzo Ferrari’s great lessons was not only to know how to read the times, but to anticipate them,’ says Ferrari CEO Louis Camilleri. ‘But the speed at which change is happening doesn’t frighten us; we exalt in it.’ On the evidence of the SF90 Stradale, the man may have point.

Of course, Ferrari being Ferrari, this is a very different kind of plug-in hybridisation. The Prancing Horse has done it its own way, with the promise of outlandish power with the kind of instantaneous torque even its on-song V12 could never muster. Total power output is rated at 986bhp (or 1000 metric horsepower), making the SF90 more powerful than the LaFerrari. It’s capable of 0-62mph in 2.5sec and 0-124mph in 6.7sec. That makes the SF90 the quickest production Ferrari in history. Sounds good, too. Similar to some of Maranello’s recent turbo V8s, like the 488 Pista’s: burly, potent and shrouded in boosty whooshes and, in this case, with added e-motor whine under – very – hard acceleration.

The completely redesigned twin-turbo 4.0-litre 90° V8 alone generates 769bhp, with another 217bhp on tap from the e-motors. A 7.9kWh battery behind the seats powers three electric motors – one for each front wheel and a third sandwiched between the V8 and the transmission, a new eight-speed dual-clutch auto.

The tech tour de force extends to the Stradale’s aero, with a split rear wing: one section’s fixed, flush with the tailgate; while a second inset section moves between flush – for lower drag – or dropped, to bring the rear wing into play and generate downforce for fast cornering.

Despite all of this additional complexity, Leiters speaks with conviction that the SF90 is a simple but still engaging car to drive fast. The hybrid powertrain’s extra weight is offset by a multi-material approach to the chassis, incorporating carbonfibre into key areas of the predominantly aluminium structure to balance weight. Even with the additional ratio, the SF90’s transmission is 7kg lighter than that of the already-snappy-shifting seven-speeder in the likes of the 488 Pista. With a kerb weight of 1570kg the SF90 is heavier than the 1425kg LaFerrari, though the V12 was more expensive and used a carbon tub. Go for an Assetto Fiorano-spec SF90 and that weight drops by another 30kg, as Ferrari swaps out more aluminium for carbon, fits a titanium exhaust and whacks on a fiercer fixed rear wing.

You might be able to find your way to the track with little fuss, too. ‘We know it is sometimes difficult to navigate in our cars,’ admits Leiters. Indeed, the late Sergio Marchionne, Ferrari’s former boss, wasn’t slow to point out that Ferrari’s HMI (human-machine interface) was lacking simplicity. That’s why the SF90’s cockpit isn’t just a rehash of Ferraris current-gen interface. An all-new steering wheel has been designed, complete with illuminated, touch-sensitive buttons with haptic feedback. Leiters says ‘around 80 per cent of all the car’s functions’ can be controlled via the buttons on the wheel. Thankfully, the trad manettino dial remains thoroughly analogue (complete with the usual Wet, Sport, Race, CT Off and ESC Off), but the fat red starter button of old has bitten the dust; it’s been replaced with a lower-yet-central touchpad of its own.

Another debut is a 16-inch curved digital instrument display. But, like the starter button, the analogue revcounter is no more, replaced with a digital one that changes graphic with each drive mode: eDrive, which allows the SF90 to travel up to 16 miles on e-power alone; Hybrid, that juggles between electric and combustion; Performance, for constant engine power; and the brilliantly-named Qualifying, for maximum attack.

‘The strength of this brand is its unification of the past, present and future,’ Camilleri points out. ‘I’m sure if we had a Ferrari that was capable of travelling through time, and we leapt through to 2049, we would still be talking about the same unwavering passion. Let’s not be shy: sooner or later, our engineers will find a way.’ If Ferrari can pull off a PHEV with such brio, a time machine is arguably a walk in the park.

FAST FOR A PHEV A 769bhp twin-turbo V8 is mated to three e-motors adding a further 217bhp. With 986bhp in total, the SF90 is the fastest-accelerating series-production Ferrari ever, capable of 0-62mph in just 2.5sec.

KINGSLAYER All-wheel drive affords traction benefits – handy given the SF90’s prodigious output. Ferrari has already put the SF90 around Fiorano, reporting that when it crosses the line the (rear-wheel- drive) LaFerrari is a full 64 metres behind…

NOT OF THIS WORLD ‘Something between a racecar and a spaceship’ was design boss Flavio Manzoni’s self-imposed brief for the SF90. Domed black canopy hides a cockpit that’s 20mm lower than the LaFerrari’s.

BOOTY BEAUTY Rear spoiler is flush but has an inset section that splits and lowers to bring the rear wing into play. SF90 is also the first series production Ferrari without round rear lights since the Testarossa and the 348 of the late ’80s/early ’90s.

Purists will lament the loss of an analogue starter and revcounter.

Perhaps more than its new technology, the SF90 shows just how far Ferrari’s – and presumably its customers’ – philosophy has shifted since I last drove the LaFerrari hybrid hypercar in 2015. In fact, it’s actually moved towards the McLaren P1, LaFerrari’s contemporary. First, adoption of a twin-turbo V8 engine is a big shift in a market traditionally hooked on V12s, though no doubt its lower weight and more compact dimensions help offset the bulky hybrid hardware, and there is an F40/288 GTO bloodline. Then there’s the plug-in technology, allowing SF90 to glide briefly about town. Ferrari always argued that its drivers wanted to hear their V12. The truth is an e-mode helps social acceptance and – as P1 proved – offers occasional welcome respite for the driver (pity the poor LaFerrari pilot at the lights).

While these changes are significant, it’s easy to imagine how a hybridised V8 will drive, given I’ve already driven the 488 Pista, from which this engine is developed. I’m more curious as to how expertly the front e-motors have been integrated, to provide all-wheel drive, and how the SF90 will handle and deploy its power as a result. Will there be steering corruption? How much faster will it corner than LaFerrari? Knowing Ferrari, our first drive will be a mind-bending experience. 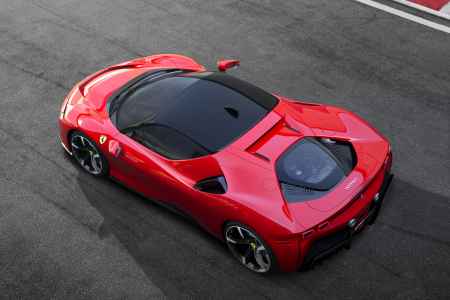 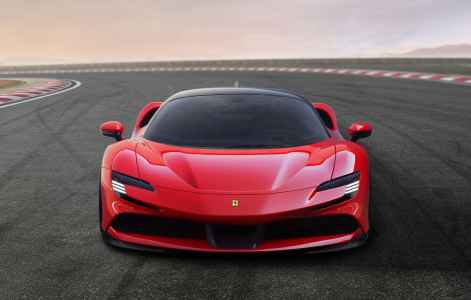 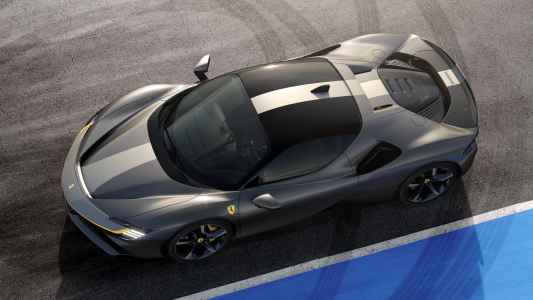 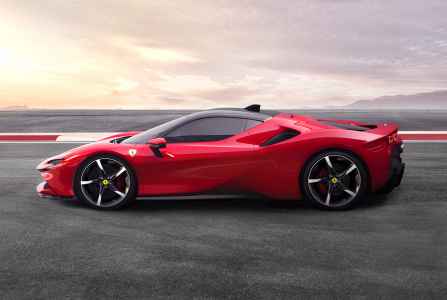 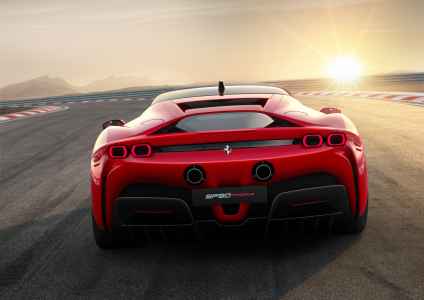 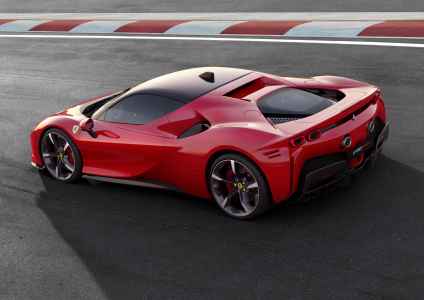 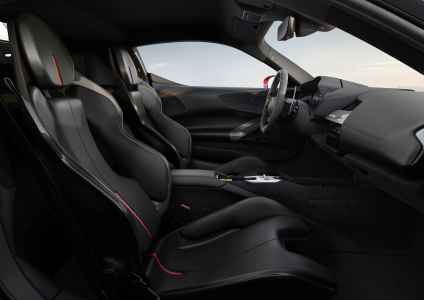 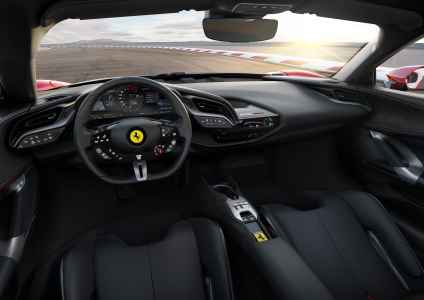